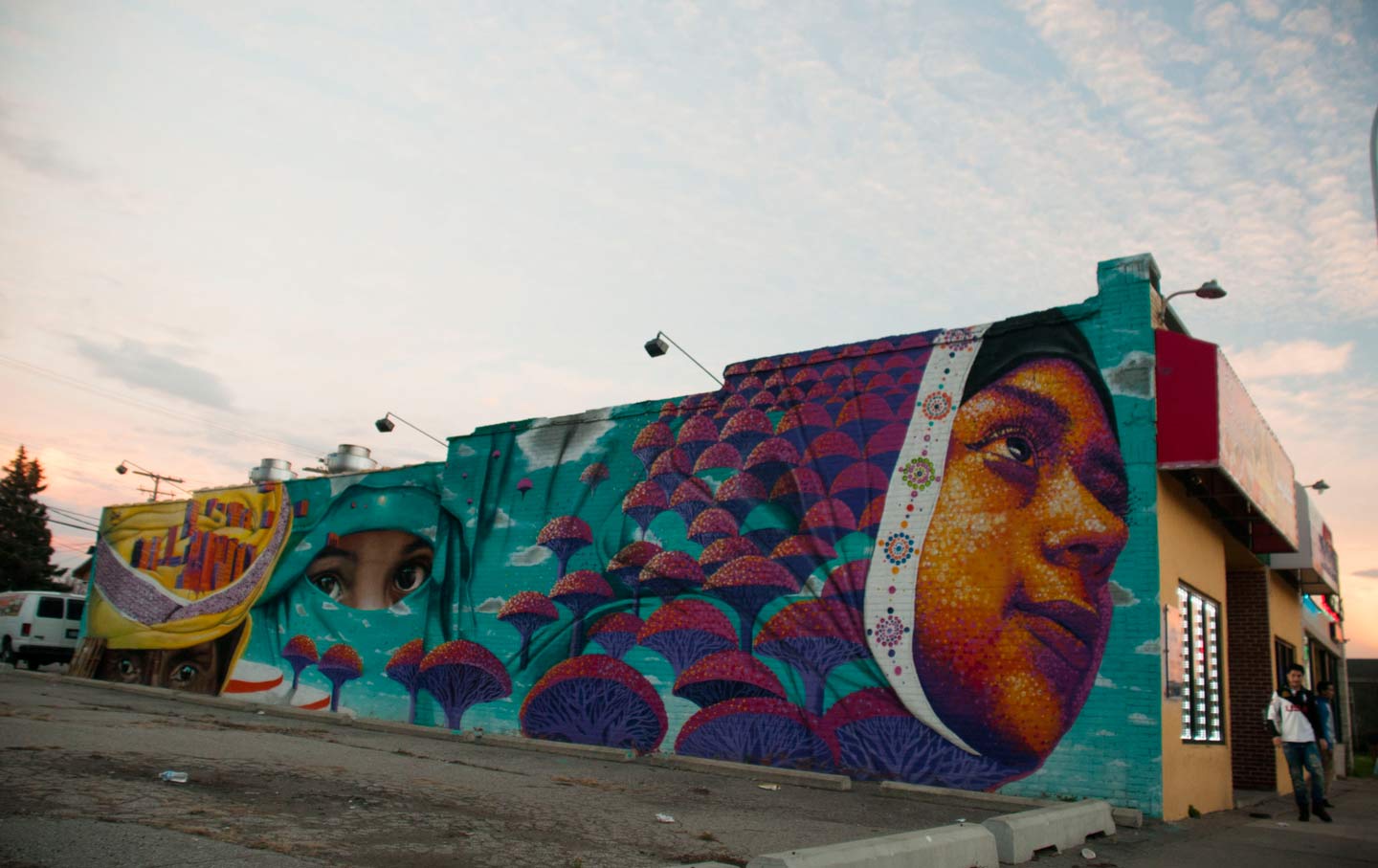 Artist Dasic Fernández’s mural is a symbol of diversity to some, a symbol of creeping Sharia law to others. (Tom Perkins)

Just after the Paris attacks, right before the San Bernardino shooting, and during a campaign season in which Donald Trump has made bigotry a pillar of his candidacy, Hamtramck, Michigan’s residents voted in the nation’s first Muslim-majority city council in its November elections.

With that news, the international media descended on Hamtramck, a dense and shabby postindustrial town physically surrounded by Detroit. The Washington Post presented a picture of a “tense” city where the “the influx of Muslims…has profoundly unsettled some residents.” CNN asked Hamtramck’s mayor if she’s afraid of her Muslim neighbors, and The Telegraph wrote of the election’s stoking “tensions” in the community. Other news sources recycled and embellished upon those reports, and suddenly Hamtramck became “Shariaville, USA” and “Muslimville, USA,” enacting booze bans and Sharia law.

In reality, there’s not much tension worth mentioning in Hamtramck (pronounced Ham-tram-ick), my home for five years. To the contrary, many of the city’s non-Muslim residents are proud to be a part of a historic first, and reports of tension and conflict are the work of those with an agenda or reporters capitalizing on a hostile national discourse.

That’s not to say the media interest is illegitimate: The Western world is experiencing a wave of Islamaphobia, and people want to know what life is like in an American city where Muslims are in charge. This is the first time in decades that the Polish Catholics haven’t run Hamtramck. Two Bangladeshis were reelected to the six-member city council in the election, while a Yemeni man bounced out an incumbent Polish council member. The three of them join another Muslim council member who was not up for reelection.

Now the elected government’s makeup reflects the changing demographics in the two-square-mile city. Hamtramck’s Polish population rose rapidly when Dodge opened its headquarters in the city in 1914. The plant closed in 1980, and while the Polish represented some 75 percent of the population at its peak in the 1970s, today they make up just 10 percent of the city’s 22,000 residents. As the Polish left for wealthier suburbs, new immigrants moved in. Muslims from Bangladesh, Yemen, and Bosnia now account for around 60 percent of residents, according to the Piast Institute, a local US Census partner that tracks the city’s population.

Of course some of my Polish neighbors are upset—that’s what happens when a group loses power and standing in their community. And, yes, there are a few bigots who are unhappy that our City Council is controlled by Muslims. But there are bigots everywhere, not just here. Those views, however, don’t reflect that of the majority of the city’s population.

“I’ve had reporters from out of town and out of the country come here and say that this wasn’t what they expected,” Polish-American Mayor Karen Majewski told me. “They expected more of a visual contrast, observable divisions, and they were surprised to find out that life was going on, and people live next to each other and share the neighborhoods. They came here with a story to tell and they had to do some adjusting to the realities they found.”

Alice Kopecky, a lifelong resident who emigrated from Poland 50 years ago, also sees Hamtramck differently than how it has been portrayed. “Maybe I’m being Pollyanna about it, but I think Hamtramck should be an example for the rest of the country,” she says. “People can come here and see it’s not perfect, but we all live together. We’re really not going to end up some isolated island of Sharia law. We just can’t logically or by law be that.  So I want to see what they do, and if they accomplish a lot, then let’s reelect them.”

Hamtramck historian and community organizer Ted Radzilowski directs the Piast Institute. Although he says residents here “have sharp elbows” and “will tell you what they think,” bigotry isn’t at the top of the local issue list.

“There’s a joke here that goes ‘You could have three heads and be walking down the street in Hamtramck and people would ignore you,’” Radzilowski told me. That’s partly because over the years the city has served as a landing pad for immigrants and ethnic groups new to the country—around 30 languages are spoken in the tiny city’s schools, according to Radzilowski.

Also, there are bigger worries. Hamtramck is poor and faces the typical Rust Belt challenges in rebuilding and reinventing itself after its auto factories disappeared. In recent years, the state twice sent an emergency financial manager to run the city, which is Michigan’s densest. Its gritty streets are tightly packed with turn-of-the century two-flats that regularly rent for as little as $400 a month.

The Muslim families buying and filling its housing are pushing up property values and bringing stability to neighborhoods depopulated by the Polish. And they’re good neighbors, says Hamtramck Downtown Development Authority Board Member Jeremy Duncan, a co-owner of HenriettaHaus Coffee Roasters. He bought a building in a predominantly Yemeni neighborhood and is among the many artists and small-business owners moving here.

“People from all over the world live together here and everyone is welcoming and friendly. Things aren’t as contentious as you would be led to believe if you’re sitting at your ranch in Texas looking at TrumpWatch.org or whatever,” he says.

While there are few issues with non-Muslims locally, outsiders’ assumptions forces local leaders like new City Council Member Saad Almasmari, a 28-year-old Yemeni, to stay busy repeating the obvious: He’ll follow the constitution. He’s there to serve all Hamtramck residents. No controversial Islamic laws. And so on.

That includes Sharia law, Almasmari’s campaign manager and community organizer Ibrahim Aljahim assured me. “These people, they ran away from Sharia law in their countries and some fought against Sharia law. What makes you think they want to go to Sharia law here?” he asked, clearly exasperated.

The only legitimate sources of “tension” are the loud 6:30 am calls to prayer, which many non-Muslims have complained about, and proposals to build mosques downtown, since the law allows imams to block bars from opening within 500 feet of their building. But that’s a state law that applies to churches and mosques everywhere, not a Hamtramck or Muslim law, as reports fail to mention. It should also be noted that a Polish Catholic majority council stamped those projects.

And while these are divisive local issues, people here don’t typically view them as a clash of the civilizations—the debates are carried out in a municipal context.

Like those in the Polish community, Bangladeshi and Yemeni Muslims I spoke with have yet to notice any post-election tension. As mostly Polish people shopped around us, Abbas Aloudi, a 29-year-old clerk at the Yemeni-owned Al Harmain market, tells me that the store has the same philosophy as the Muslim politicians when it comes to serving the community.

“We’re proud to be Muslim, but we’re here for everyone, open for business for everyone in Hamtramck,” he says. “There’s no tension since the election. None. No changes. Everyone is still friendly and loving.”

That doesn’t mean everything is perfect, and there are obvious problems in Hamtramck, but Mayor Majewski says ethnic tensions aren’t among them.

“This is a community where people from all over the world live close together, people of all kinds of religions and national background live next to each other, but not in some idealized Kumbaya, Epcot Center kind of way,” she says. “It sometimes gets contentious, but we deal with things…and we have a successful and organic process of building a community together.”