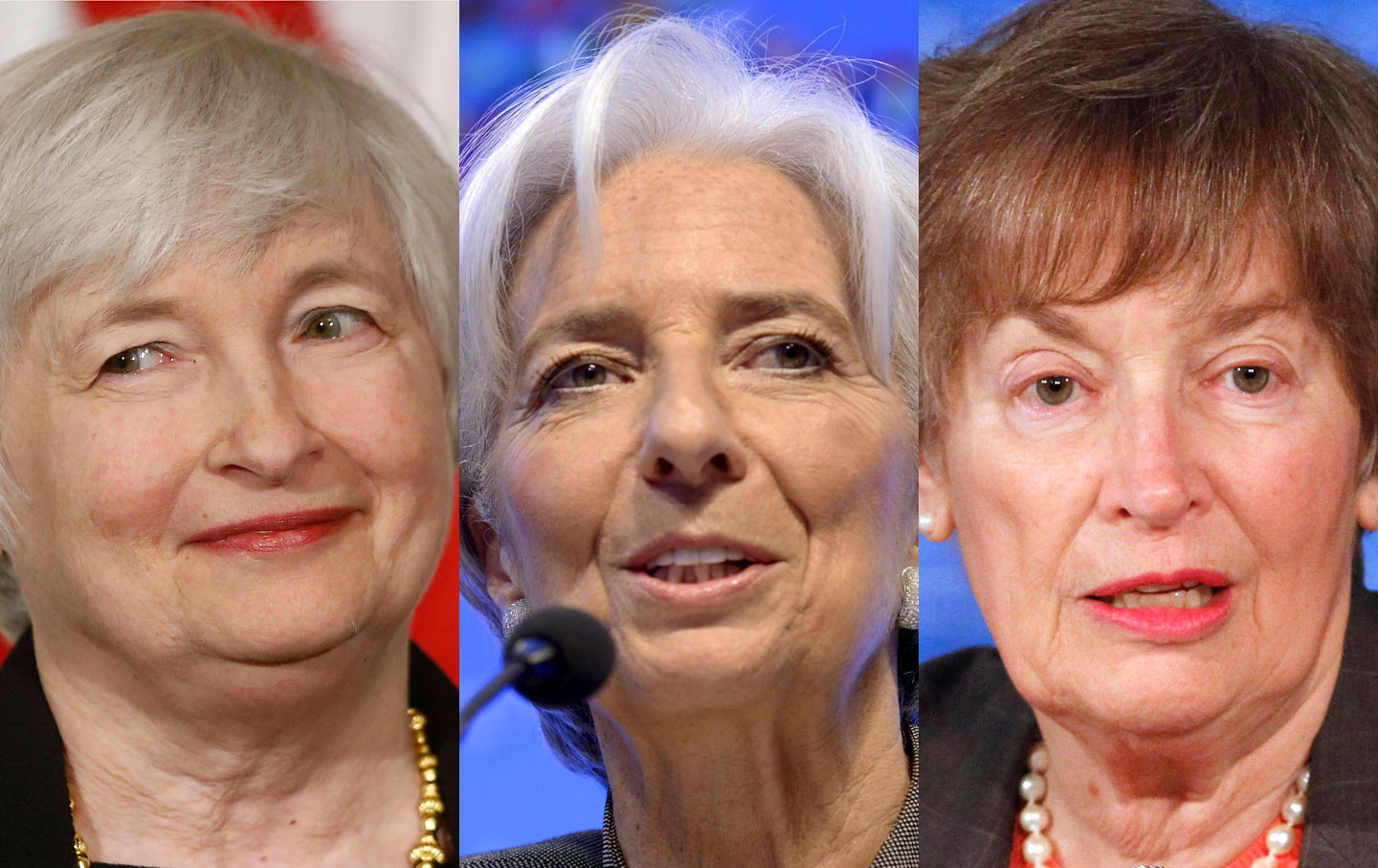 If women were in charge of banking regulation, could they save us from the Wall Street cowboys who crashed the global financial system?

That provocative question was the implicit subtext for an all-day conference of banking and financial officials in Washington this week, held at, of all places, the soberly serious International Monetary Fund. The IMF’s managing director, as it happens, is a woman—Christine Lagarde of France—and she appeared alongside an even more powerful woman—Janet Yellen, chair of the US Federal Reserve System. Neither of them was in charge when the system crashed in 2008.

The IMF event was not a rump rally of feminists who somehow crashed the halls of power. But all of the 18 speakers on various panels were women, prominent as bank regulators or financial authorities. The one-sided gender line-up was not exactly an accident. The men in suits could hardly miss the message.

But just in case they did, IMF Director Lagarde prompted them with a droll question: “What would have happened if Lehman Brothers had been Lehman Sisters?”

What she meant was that different values might have prevailed if women had held the controlling positions at the brokerage or were the government regulators enforcing prudent standards. Women, as Lagarde has observed, worry more about financial exclusion. Worldwide, 42 percent of women have no access to financial services. Only a measly 3 percent of bank CEOs are women.

More to the point, Largarde said research shows women are more risk-averse—a quality utterly missing in the reckless banks and brokerages rushing like lemmings to the cliff. Women in charge might have asked tougher questions.

Fed Chairwoman Yellen stayed away from the gender question. But Lagarde has invoked “Lehman Sisters” numerous times since the financial collapse and disappointing recovery.

“It takes a great deal of will power to direct the French economy,” Largarde wrote in 2010 when she was France’s finance minister. “I am not doing this for women but as a woman I am, perhaps, more keenly aware of the damage that the crisis has done through greed, pride and a lack of transparency…. I am determined to do everything within my power to change the rules of the game and do my best to ensure that a crisis such as this can never happen again.”

What women want, she wrote, is to be judged, like men, on the basis of their deeds. She added what Eleanor Roosevelt had to say on the subject. “A woman is like a tea bag—you never know how strong it is until it’s in hot water.”

One of the conference speakers, Brooksley Born, is a courageous example. Born was nearly drowned by “hot water” dumped on her by Robert Rubin, Alan Greenspan, and Larry Summers during the Clinton administration. As a regulator she was trying to impose some limits on dangerous derivatives. The men hammered her, blocked her, and effectively drove her out of government.

Years later, after the crash had vindicated her warnings, Born was not embittered but still advocating fundamental reforms. Rubin, the former Treasury secretary, blamed his own failure to act on the absence of “political will” in Washington.

“Of course,” Born observed dryly, “it might have made a difference if the secretary of the Treasury had taken a position.” The audience applauded for this woman who in crisis had not been wrong nor risk averse.

In a sense, the noisy demonstration for Brooksley Born fulfilled an implicit objective of the Institute for New Economic Thinking that sponsored the IMF event. INET recruited the all-female line-up of emerging leaders in banking and finance. The institute was co-founded and funded by investor George Soros and others, and it set out to sweep worldwide in search of new ideas and new economists who are breaking free of the old orthodoxy that failed.

INET President Robert Johnson has been organizing conferences around the world, educating and recruiting and encouraging political actors to abandon the old garbage. For some years, Rob Johnson was a key partner of Soros in global investing (also an old friend and valued source of mine).

INET is a long-term proposition obviously—an attempt to envision and promote a financial system that serves society rather than exploiting and abusing it, that restores and nourishes people and families instead of subverting them.

“The old boys’ club did not prove to be a committee to save the world.” Johnson told the conference audience, referring to the boastful media label once worn by the Rubin-Greenspan-Summers political machine. “The aftermath of the financial crisis is a bitter wilderness and we have been lost and have to find out way.”

From personal experience and his far-flung travels in the global economy, Johnson found hope increasingly in the fresh new players in the system who used to be excluded outsiders—smart and serious women who are already thinking about how to change the way the world works.

A few years ago, Johnson spoke at a gathering of political activists where his friend Arianna Huffington was posing the questions. She asked him: “If you could wave a magic wand and do one thing to make the financial system better, what would it be?” Johnson had a quick answer: “Only women get to regulate finance.” The audience laughed and clapped. But Johnson added some details to demonstrate this was not a frivolous thought. “Brooksley Born, Sheila Bair, Janet Yellen, and Elizabeth Warren. If they had been running financial regulation since 1990, we would not have had this crisis!’’

The Institute for New Economic Thinking launched its ambitious efforts on that wishful proposition.

“The way forward was hiding in plain sight,” Johnson said. “And they happened to be women”