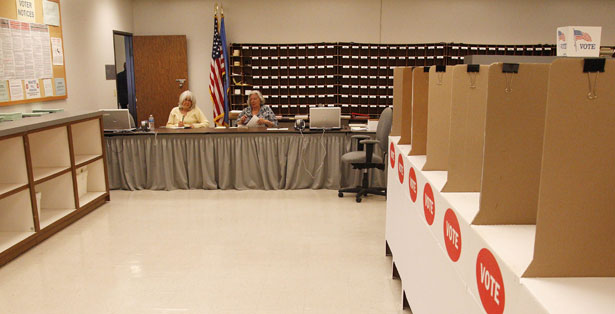 Editor’s Note: In a recent blog post, Michelle Goldberg criticized Adolph Reed’s recent essay in Harper’s, “Nothing Left: The Long, Slow Surrender of American Liberals,” for its “electoral nihilism.” “A left that absented itself from the dirty work of electing a president,” Goldberg writes, “would be indulging in the very reflex Reed decries: trying to send a message to those in power rather than contending for power itself.” Reed responded in the comment thread, clarifying his position on elections and Democratic party politics. We reprint his reply here.

For the record, I don’t argue for backing third party candidacies, which as a rule are quixotic by definition, and I agree with Goldberg that in any given election it’s overwhelmingly likely to be true that the only realistic choice is to vote for whichever Dem is running. So her beef on that score is with someone else, not me. I do argue that it’s a serious mistake to exaggerate what we’re doing when we vote for them and that that practice has come back to haunt us since Clinton at least. As only one small illustration, where has the American antiwar movement been since November 2008, even as President Obama has expanded the theaters of American military intervention? My vote for Nader in 2000, by the way, stemmed mainly from the right-tilting campaign Gore ran, which was embodied in his selection of reactionary tool Joe Lieberman as his running mate. (And I’m still proud to say that I’ve never voted for Lieberman for anything.) As I point out in the Harper‘s article, recalling Gore’s bellicosity toward Iraq should give pause to blithe assertions that he wouldn’t have used, or been goaded into using, the September 11 attacks as a pretext for invasion as did Bush. As I also note in the article Clinton conducted nearly as many military interventions as Reagan and Bush the Elder and in four fewer years.

And what do we say about the social impact of Clinton’s support for financial deregulation and his role in gutting the federal commitment to provide income-support and housing for the poor? Or his failure to pursue labor law reform when he had the opportunity? What about NAFTA? And that leads us to the nearly parodic imagery of Obama’s simultaneously tossing off a passing gesture to concern with inequality—worthy of a more florid version of Mr. Mackie from South Park—and then heading off to twist Congressional Democrats’ arms to support fast track for the Trans Pacific Partnership “trade” agreement, which certainly would produce a bunch more inequality. Of course, the good news is that Nancy Pelosi and Harry Reid stood up to him, at least for now, and that is an argument for the relative difference that having approachable Democrats in office can make. We’ll see how long that victory lasts, but it most likely wouldn’t have been possible without Democrats who feel beholden to the progressive groups that lobbied them so hard to rebuff the president. It also wouldn’t have been possible without that pressure from outside the administration and the wing of the Democratic party with which it’s aligned. (Anyone recall Rahm Emanuel, Penny Pritzker, and Austan Goolsbee, just to name some of the Chicago crew?)

The victory on fast track illustrates the nature of the left’s relation with the Dems. Sometimes we can stop something really bad from happening. That’s not chopped liver. We’ll have to see what happens next. But we haven’t been able to win anything that a left would want in a long time, longer than most of the Nation‘s ideal readers can remember. Paul Wellstone observed nearly two decades ago that the GOP proposes something really, really terrible; the Dems respond with something somewhat less terrible, which we “win” and then celebrate the victory which actually may have made things somewhat worse overall.

No one could have more contempt than I for Bush’s debasement of FEMA and his role, along with his loathsome henchmen Michael Brown and Michael Chertoff, in perpetration of the criminal travesty on New Orleans post-Katrina. However, Goldberg should slow her roll there also. Erosion of the wetlands that protected the city, intensified by years of bipartisan sweetheart deals for the energy industry, and inadequate and shoddy construction and maintenance of the levees preceded Bush. The latter was the product of decades of bipartisan neoliberal attacks on the public sector and more sweetheart deals—just as is the Obama administration’s current attack on public education nationwide.

The problem, once again, isn’t voting for Democrats; it’s letting a rightward tacking Democratic party set the political horizons and agenda for—exhaust the practical political imagination of—those who see themselves as a left. Once again, as I said in the Harper’s essay, even as in practical terms we have no realistic choice most often than to vote for Democrats as lesser evils, the fact that those of us who consider ourselves on the left must confront is that what the electoral options come down to are a choice between a neoliberal party that actively supports diversity and multiculturalism and a neoliberal party that actively opposes diversity and multiculturalism. Between the two, clearly the more open version of neoliberalism the Dems offer is less bad than the other. Especially from the standpoint of a left, however, the crucial focus of politics must be to struggle to change the terms of debate that leave us with such impoverished choices. It’s only in the context of a shriveled political imagination that that stance looks like nihilism.