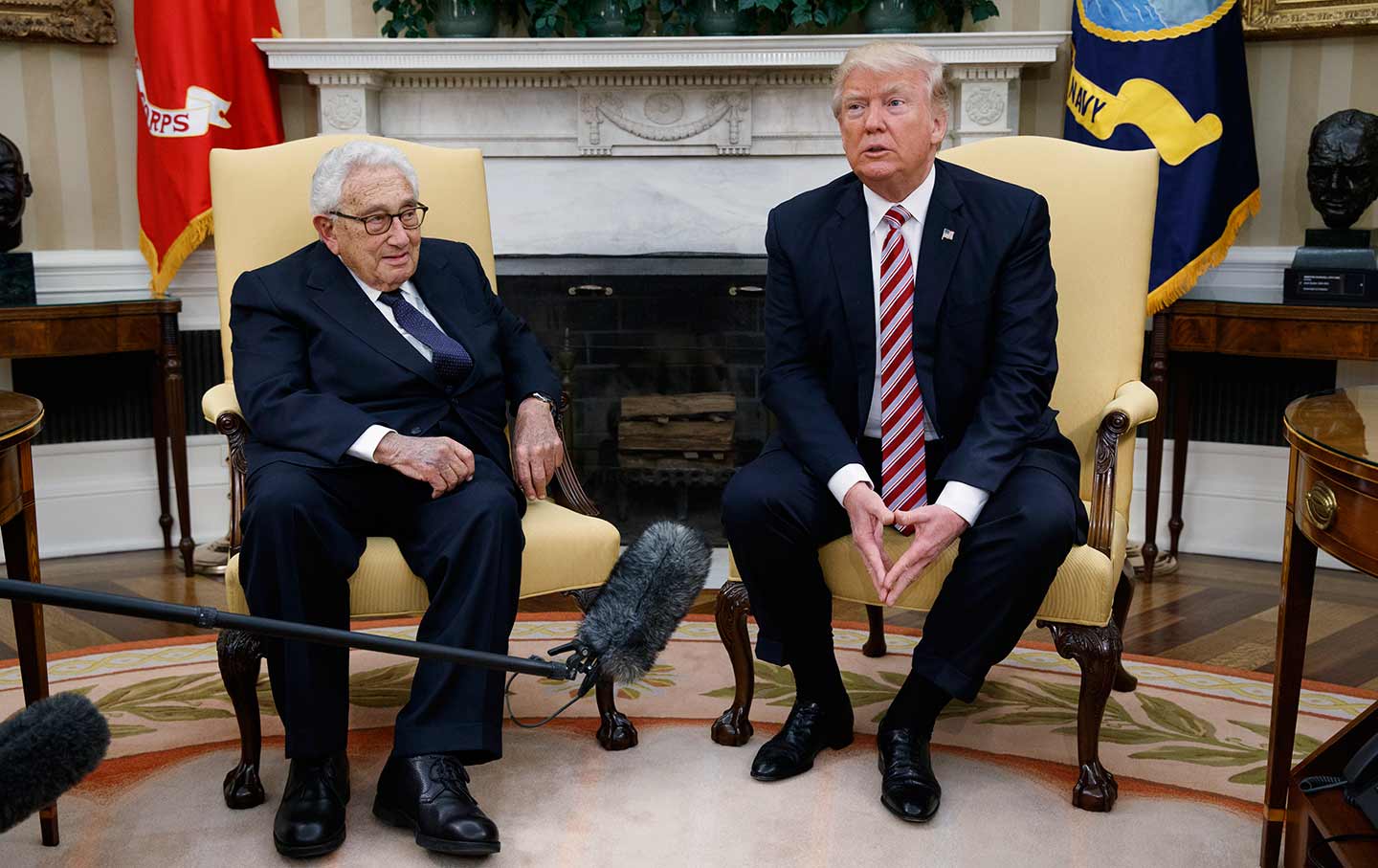 So yesterday, with social mainstream media lit up with discussions of Watergate, Saturday Night Massacres, and impeachment, who but Henry Kissinger should show up at the Oval Office and sit down for a photo shot with Donald Trump, where Trump took questions on Syria, Russia, and Comey.1

About two years ago, I published a book called Kissinger’s Shadow (now out in paperback), which argued that Kissinger is good to think with. By this, I meant that his long career (as an early Cold War defense intellectual, a top foreign-policy maker, a consigliere to the world’s elite, and a hawkish pundit), combined with his very self-aware philosophy of history, helps illuminate the contours of postwar militarism, tracing a bright line from the disastrous war in Southeast Asia to the catastrophic one in the Persian Gulf.2

The book came out long before Trump appeared a serious option, when I thought an autumnal Kissinger’s last act would be to bask in the warmth of neoliberal love offered by Democrats such as Hillary Clinton and Samantha Power. Its conclusion focused on the ways in which Barack Obama’s pragmatic, managerial militarism echoed Kissinger’s earlier justifications for interventionism and war, and the way Kissinger used Obama’s disregard of national sovereignty, in his reliance on drones and bombing campaigns, as an ex post facto absolution of his own past actions. Asked about his involvement in the overthrow of Salvador Allende in Chile and his illegal bombing of Cambodia, Kissinger answered: Obama does it, pointing to the drone program and the ouster of Gadhafi in Libya. I took this as a perfect expression of American militarism’s merry-go-round: Kissinger invokes today’s endless, open-ended war to justify what he did in Cambodia and Chile (and elsewhere) nearly half a century ago, even as what he did half a century ago, as the book tries to show, helped create the conditions for today’s endless wars.3

Kissinger has been writing about someone very much like Trump nearly his whole life.

It turns out Kissinger’s Shadow needs an epilogue, for Trump vindicates its argument in a different way. There are materialist explanations for Kissinger’s affinity with Trump. Kissinger has long called on Washington to work closely with Moscow, to create a new axis of global stability. And the portfolio of Kissinger Associates Inc., among the world’s premier neoliberal consulting firms, will benefit from access to the Trump administration and, were relations to improve, to Russia. But what is more interesting is the way the two men converge—or, perhaps better, combust—ideologically.4

“The West requires nothing so much as men able to create their own reality.” —Kissinger

Kissinger has been writing about someone very much like Trump nearly his whole life. Great statesmen, he said in the 1950s, need to be “agile,” and must learn to thrive on “perpetual creation, on a constant redefinition of goals.” They need to avoid the paralysis generated by thinking too much about the consequences of policy, about the “pre-vision of catastrophes” that often beset diplomats and regional specialists. “There are two kinds of realists,” Kissinger wrote in 1963, “those who manipulate facts and those who create them. The West requires nothing so much as men able to create their own reality.” That requirement has been met with Donald Trump, whom in the weeks leading up to his inauguration Kissinger has embraced like Fantasia’s sorcerer did his apprentice, before the apprentice got hold of the broom. A “phenomenon,” Kissinger called Trump, saying that “something remarkable and new” might emerge out of his presidency. Trump has the “opportunity of going down in history as a very considerable president.”5

Kissinger, at 93, is back in the mix, once again working the sweet spot between world order and world chaos where his repute as an elder statesman of singular gravitas thrives. Contrasted with the amateur recklessness of the Trump transition team, Kissinger has emerged as the only adult in the room (a role he played well in the final months of the Nixon administration). Will Kissinger, one journalist wondered, help Trump broker a deal with Putin? Will he, asked another, moderate Trump on China? “Kissinger soll neuen Kalten Krieg verhindern” (“Kissinger to Prevent New Cold War”) ran the headline of the German tabloid Bild.6

For a while after the inauguration, Kissinger went to ground and stopped commenting on Trump to the press. With the new administration off to a rocky start, perhaps he was sussing out his options. Another reason Kissinger is good to think with is because his career has tracked, almost perfectly, the right-wing movement of American foreign policy. At every single one of America’s postwar turning points, moments of crisis when other policy and opinion makers of his stature—George Kennan, for instance, or Arthur Schlesinger—began to express doubts about American power, Kissinger broke in the opposite direction. After serving the center-right Nelson Rockefeller, he moved quickly to Richard Nixon, whom he first thought was unhinged; then to Ronald Reagan, whom he initially considered hollow; and then to George W. Bush’s neocons, despite the fact that they all rose to power attacking Kissinger.1

Lessons From the Thinnest of Seymour Hersh’s Thinly Sourced Claims

Fortified by what I describe in the book as an uncommon mix of gloom and glee, Kissinger never wavered. The gloom led him, as a conservative, to privilege order over justice. The glee led him to think he might, by the force of his will and intellect, forestall the tragic and claim, if only for a fleeting moment, freedom. “Those statesmen who have achieved final greatness did not do so though resignation, however well founded,” Kissinger wrote in his 1954 doctoral dissertation. “It was given to them not only to maintain the perfection of order but to have the strength to contemplate chaos, there to find material for fresh creation.” And so now he moves to Trump, who is always looking for new material.7

Watergate was really about US crimes against Cambodia—and Kissinger survived it largely by playing the press.

It makes sense that the old mole popped up yesterday, when the word “Watergate” was tripping off everyone’s lips. If anyone can tutor Trump on how to survive this crisis, it’s Kissinger.8

Kissinger, in 1974, should have gone down with the rest of them—Haldeman, Ehrlichman, Mitchell, Dean, and Nixon. His fingerprints were all over Watergate, which, as I write in Kissinger’s Shadow, is misremembered as primarily a domestic crime when it was really about Cambodia. Yet he survived, and he did so largely by playing the press.9

For what must have been for him a long year, between mid-1973 and mid-1974, it seemed Kissinger, now holding the position of both national-security adviser and secretary of state, would be going down with Richard Nixon, along with his top aides, who were all gone by April 1973. Kissinger almost got caught on his illegal bombing of Cambodia, when Maj. Hal Knight sent a whistle-blowing letter to Senator William Proxmire informing him of his involvement in falsifying records of the bombing. The Senate Armed Service Committee held hearings through the middle of 1973, and Seymour Hersh came very close to establishing Kissinger’s involvement in setting up the dual-record reporting system. Hersh couldn’t confirm Kissinger’s role (he would at a later date, and when I was writing Kissinger’s Shadow I found more evidence that directly implicated Kissinger in setting up the illegal dual-reporting system). But that still didn’t let Kissinger off the hook.2

“Follow it up as far as we can take it…destroy whoever did this.” —Kissinger, in a phone call to FBI director Hoover

Landing in Austria, en route to the Middle East, and finding that the press had run more unflattering stories and editorials, Kissinger took a gamble. He held an impromptu press conference and threatened to resign (this was on June 11, less than two months before Nixon’s resignation). It was by all accounts a bravura turn. “When the record is written,” he said, seemingly on the verge of tears, “one may remember that perhaps some lives were saved and perhaps some mothers can rest more at ease, but I leave that to history. What I will not leave to history is a discussion of my public honor.”11

The bet worked and the press gushed. He “seemed totally authentic,” New York magazine wrote. As if in recoil from the unexpected assertiveness they had shown in recent years, reporters and news anchors rallied around Kissinger. The rest of the White House was being revealed to be little more than a bunch of shady two-bit thugs, but Kissinger was someone America could believe in. “We were half-convinced that nothing,” Ted Koppel said in a documentary in 1974, just after Kissinger’s threatened resignation, “was beyond the capacity of this remarkable man.” The secretary of state was a “legend, the most admired man in America, the magician, the miracle worker.” Kissinger, Koppel said, was “the best thing we’ve got going for us.”12

Trump is pure showbiz, but it is Kissinger who deserves an Oscar for the performance that saved his career.13