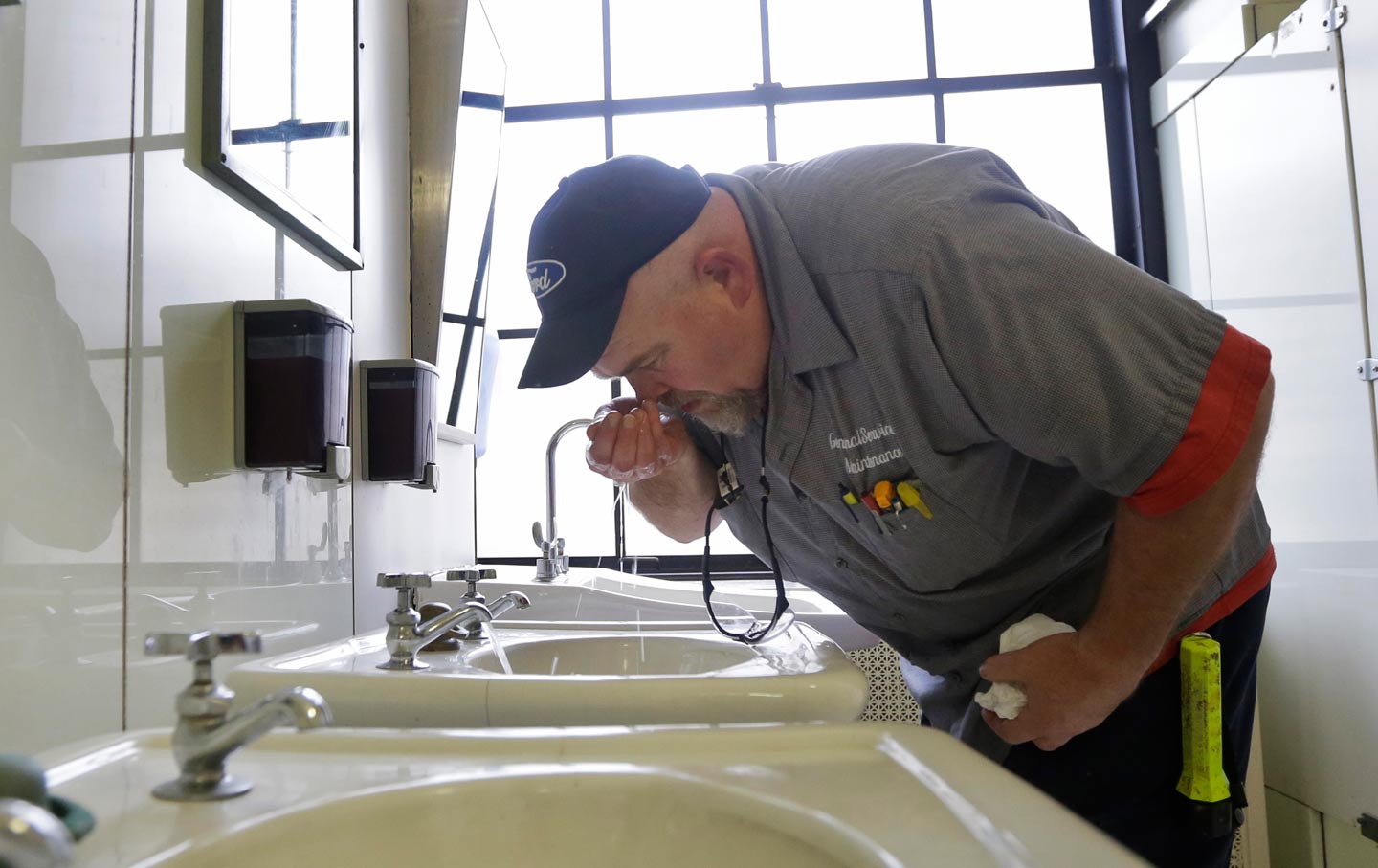 One hallmark of life in a “developed” country is a secure supply of clean water. But America’s rural and urban landscapes are marred with dry patches. Activists went to the Inter-American Commission on Human Rights (IACHR) last week to shame the US government for forcing on its people a kind of thirst that smacks of festering poverty in the world’s richest society.

At an IACHR hearing on water rights, activists from different regions denounced the US government’s failure to provide clean, affordable water. While they cited crumbling sanitation systems and agricultural pollution, the fundamental crisis wasn’t simply scarcity, but institutionalized deprivation and massive social inequality from coast to coast.

The government, they declared, “systematically denies our human right to life by: allowing our communities to live with contaminated drinking water for decades; engaging in mass water shutoffs… and leaving us without adequate water and sanitation infrastructure.”

Edith Hood of the indigenous Red Water Pond Road Community in northwestern New Mexico recalled the day heavy industry descended on her pristine homeland in the 1960s. Suddenly, “the exploratory drillers came into our neighborhood making noise, lots of traffic, leaving dirty blue water and mud, our safe and supportive environment was turning upside down.” Soon the uranium boom that had led the drillers to her corner of the country had left the land riddled with mines and mills that would ultimately contaminate the groundwater supplies of millions. While uranium was “making some people rich at the expense of Mother Earth,” she said, local residents, herself included, were coopted into the mining workforce and got left with “mounds of waste piles” and toxic concentrations in their bodies.

The community now faces “an impossible choice” between safe land and safe water, she said. Although they could potentially move to avoid radiation exposure, due to a lack of federal investment, the designated relocation area would not have adequate water infrastructure.

Horacio Amezquita, an activist with the San Jerardo Community/ Environmental Justice Coalition on Water, recalled a parallel history of industrialized agriculture overtaking his Salinas Valley farming co-operative, housing 64 families, which was founded in the 1970s by Mexican farmworkers seeking to “escape the violent racism of the urban slums.”

Since the 1990s, however, their rural sanctuary has been assaulted by pollution from synthetic fertilizers and pesticides contaminating local groundwater aquifers. Though the community has upgraded the infrastructure to protect the water supply, there has been a spike in water costs—up to 15 percent of household income. Now the community is trying to stave off corporate privatization of the water system. “Government permits the agricultural industry to shift the burden to pay for its pollution to the people least able to afford it,” Amezquita argued.

Amezquita noted California has not fulfilled the mandates of its 2012 landmark law on the human right to water, which states that “all humans have a right to safe, clean, affordable, and accessible water for human consumption and sanitation.” Today, he says, in the community that once provided refuge from a toxic urban environment, the “intensive, year-round agriculture that has been practiced here for decades has left a legacy of groundwater pollution that continues unabated to the present day.”

In Detroit, it’s austerity that has created a humanitarian crisis. Tens of thousands of residents had their water services cut in February of 2014, amid the city’s economic collapse. Additionally, thousands more warning notices went out to households last May. The pattern of water deprivation led activists last year to petition the United Nations on humanitarian grounds.

One year on, at the hearing, Maureen Taylor of the Michigan Welfare Rights Organization denounced the service cuts as a “scandalous practice, heaved onto the backs of people too poor to pay the rising costs of fresh water.” She pointed to an alternative water financing plan developed by community advocates to address the affordability crisis. But, she warned, the underlying crisis may take years to resolve because of “the rising poverty of people caught in the trap of exploding technology which challenges the capacity for low-income people to find work.”

Another rural viewpoint was presented by Catherine Flowers of the Alabama Center for Rural Enterprise. In her impoverished hometown of Lowndes County, she testified, “of the 5100 households, half have failing septic systems or none at all,” and children are “living and playing among raw sewage.” Meanwhile, the cost of repairing septic systems is unaffordable for these families, yet a broken system could get you slapped with a fine. Flowers called it “the starkest form of inequality in this nation and a blatant violation of the human right to clean water and sanitation.”

While the delegation did not directly address climate change, looming over all the immediate water crises the testimonies described were the intensifying global resource pressures tied to climate risk. Drought is ravaging farmlands, while sagging infrastructure combined with intensifying weather disasters are threatening basic water and sanitation resources for the urban poor.

Rebecca Landy of the US Human Rights Network says via e-mail that the group is campaigning for “concrete actions the IACHR and US government can take to stop the crisis” including, for the United States, ”an immediate moratorium on mass water shutoffs,” ensuring affordability of water services, remediating pollution, and punishing the polluters, instead of affected communities.

The delegation called for an end to the “criminalization of those who lack water and sanitation,” so that poor people are not penalized for not being able to afford basic public services.

As with many international protocols, the IACHR’s word will likely go ignored by most US policymakers, but the bottom line is, the United States shouldn’t need to be shamed by an international body into providing essential social entitlements for its communities. While there may not be a guaranteed right to water in the Constitution, perhaps that’s simply because we tend to take the dignity that water endows us with for granted… until the well runs dry.