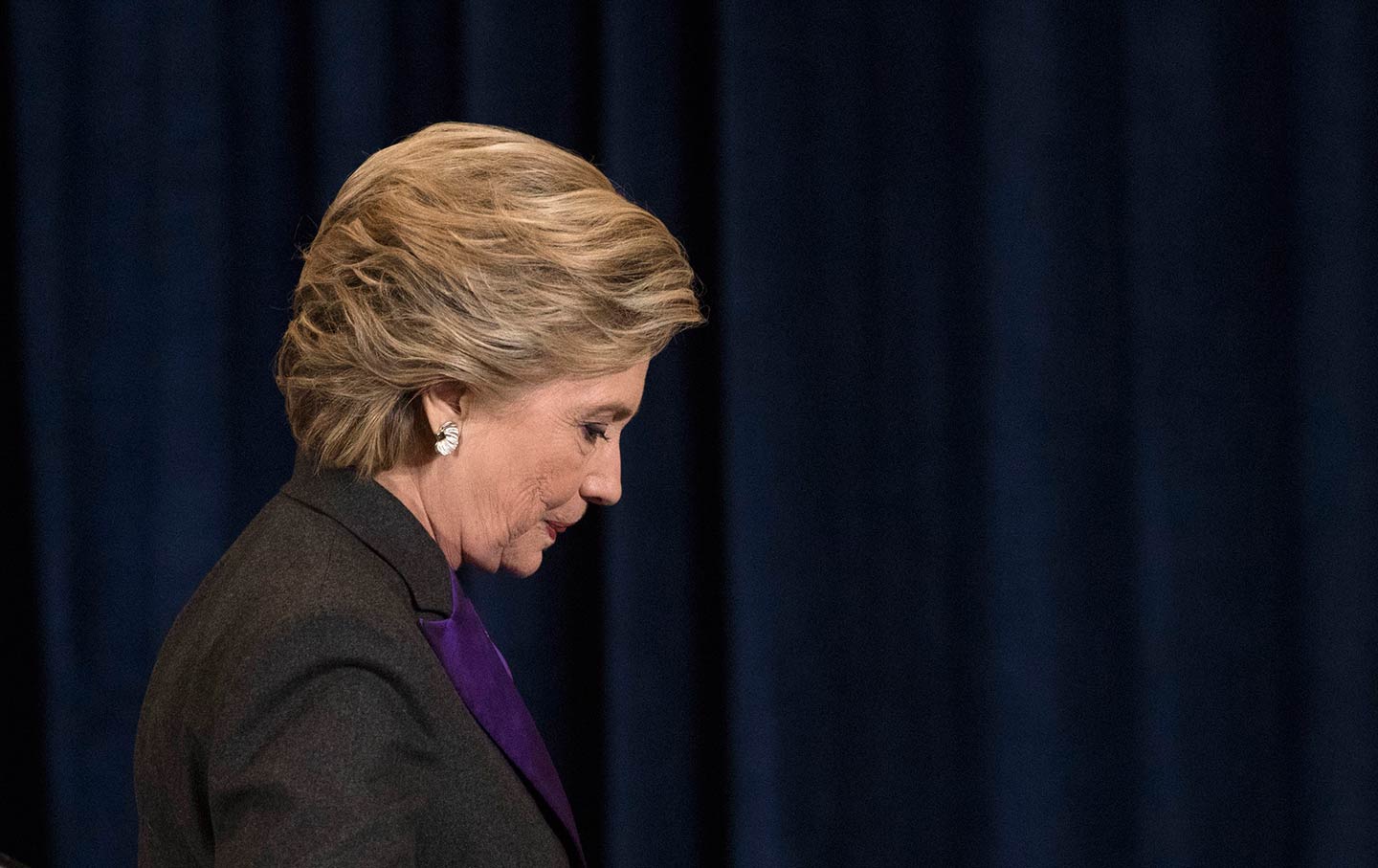 I’ve worn the same t-shirt to bed since the night of the election. It says, “When they go low, we go to the White House.” The writer Sara Benincasa produced them, an obvious homage to Michelle Obama’s stirring, “When they go low, we go high.” I bought it for my daughter, who worked her heart out for Hillary Clinton for more than a year, in five different states. Obviously, given Donald Trump’s devastating win, I couldn’t give it to my daughter. I can’t imagine wearing it outside the house. I was wrong, so very wrong. And so were you, Sara, and Michelle, and yes Hillary, you too.

The truth is when they go low, they go to the White House.

Part of my unrelenting sadness is a kind of narcissism that I need to get over: How could I get everything so wrong? Even worse, I feel like I’m part of the problem. I’m the kind of optimistic liberal feminist, maybe a tad bit on the self-congratulatory side, who would buy her daughter a T-shirt like that.

But that’s not entirely narcissism. A coalition of women as diverse as Tina Brown, she of haute journalism and her elite “Women in the World” conferences, and Nation writers Kathy Geier and Liza Featherstone, have come together to tell me that I am precisely the problem. Writing in The Guardian, Brown blames “liberal feminists” for making a big deal about Trump’s “grab ‘em by the pussy” remarks. “The two weeks of media hyperventilation over grab-her-by-the-pussygate, when the airwaves were saturated with aghast liberal women equating Trump’s gross comments with sexual assault, had the opposite effect on multiple women voters in the Heartland,” Brown claims, citing zero data. “These are resilient women, often working two or three jobs, for whom boorish men are an occasional occupational hazard, not an existential threat.” To be clear, Trump’s own words really do meet the legal definition of sexual assault. But “liberal feminists, young and old” apparently ought to have shut up about it.

Geier blames something she calls “Big Feminism,” by which I guess she means Clinton-endorsing groups like Emily’s List, Planned Parenthood and NARAL Pro-Choice America, for backing a faux-feminist like Clinton. (Senator Bernie Sanders called them “the establishment.”) It’s puzzling to me that someone who considers herself a feminist would want to equate groups working to protect women’s rights to “Big Pharma” or “Big Coal.” Geier attacks Clinton for elevating the concerns of elite, upper class women over those of poor and working class women. And she promotes a worthy agenda for action: “The most promising path forward would be to agitate for a robust economic agenda focused on women’s needs: a $15 minimum wage, universal child care and pre-K, paid family leave, free college, and tough laws that crack down on wage theft and guarantee fair scheduling and equal pay for women.”

Of course, Hillary Clinton supported almost all of those policies (she supported tuition-free college only for families making less than $125,000).

Writing on the Verso Books blog, Liza Featherstone sounds a lot like Geier. “Once she had secured the nomination, Clinton offered few ideas about how to make ordinary women’s lives better. That’s probably because what helps the average woman most is redistribution, and Clinton’s banker friends wouldn’t have liked that very much.” Again, this is literally untrue—Clinton proposed steep tax hikes for the rich, to pay for things like paid family leave and tuition-free college, a precisely redistributionist approach.

I apologize for letting optimism cloud my political judgment.

I apologize for believing that a man who bragged about pussy-grabbing, who shared the Tweets of racists and anti-Semites, who swindled workers and bankers alike, who hired a white nationalist as campaign chair (and just made him chief White House strategist) could not be elected president.

I apologize for not condescending to my white working class sisters, and not assuming they would find pussy-grabbing A-OK. Who knew? Tina Brown, I guess.

I apologize for expecting writers who claim to be smart about feminism to actually look at Clinton’s platform and see what’s in it.

I apologize for thinking that more Americans, including more of my fellow leftists, would recognize that the only woman who could get into place to be our first female president would be a “flawed” one. That she would have to be someone who got too close to power and money to be considered an outsider, because that’s what outsiders—people who haven’t ever gotten to be president, who were “given” the right to vote less than a century ago—have to do to become president. Too many refused to recognize that, and so they made their claim that Clinton was “fatally flawed” come absolutely true.

I apologize for thinking that the country was ready to elect a woman president.

But here, let me segue out of sarcasm and admit that I really, truly did get a few things wrong. First, I was wrong to overestimate the number of people who would not be able to see past Clinton’s elite “branding,” which had actually been burnished over the last eight years. The combination of her time as Secretary of State, plus the glitz of the Clinton Foundation, plus those Goldman Sachs speeches—all had the effect of making her seem far less populist than she seemed even in ’08, even if her message was more populist this time around. The number of people, including women, who refused to accept my belief that the first woman president was going to have to be exactly that much of an insider, because she was by definition such an outsider, was in the end much smaller than I believed. I indulged in wishful thinking that I thought was smart political analysis.

I also think, because I knew so much about the campaign—hey, inequality expert Heather Boushey was her transition team’s chief economist! Of course she’s committed to progressive economic policies!—I couldn’t see how in the final month, in particular, Clinton’s larger campaign message focused on disqualifying Trump, rather than qualifying her. Even in North Carolina, where I spent the campaign’s closing days, the ads I saw tailored to black voters focused on continuing President Obama’s legacy, as more of a racial pride appeal than an economic one. Even the voice of God, Morgan Freeman, didn’t sell her as the economic warrior that workers of every race needed her to be, and few of us seemed to know that she had promised to be. I always assumed that we would see a more direct economic appeal from the campaign, and I was so distracted by everything that happened in the closing weeks—the “Access Hollywood” tape, Clinton’s huge debate victories, FBI director James Comey’s unforgivable intervention—I didn’t notice that it never came.

Still, she had more of a message than her lefty haters give her credit for. One low point this week came on Sunday, as I watched a group of Clinton critics on MSNBC’s “AM Joy” decry her lack of a populist economic message, as old video of Clinton speaking, with no sound, played behind their criticism. I could see her mouth the words “Wall Street,” “banks” and “hedge funds” but I could only hear her critics. It was a microcosm of the whole campaign. (Thanks to Joy Reid, I got to say exactly that.)

And whether you liked it or not, Clinton’s campaign did have an over-arching message. It was her slogan: “Stronger Together.” That message was rejected by 63 percent of white people. We must always remember that Clinton won the popular vote, by as much as two million votes when all the ballots are counted, a bigger margin than any “losing” candidate in history. But still, I thought that was a resounding winning message, and I am sorry I was wrong.

But I will never apologize for thinking that.