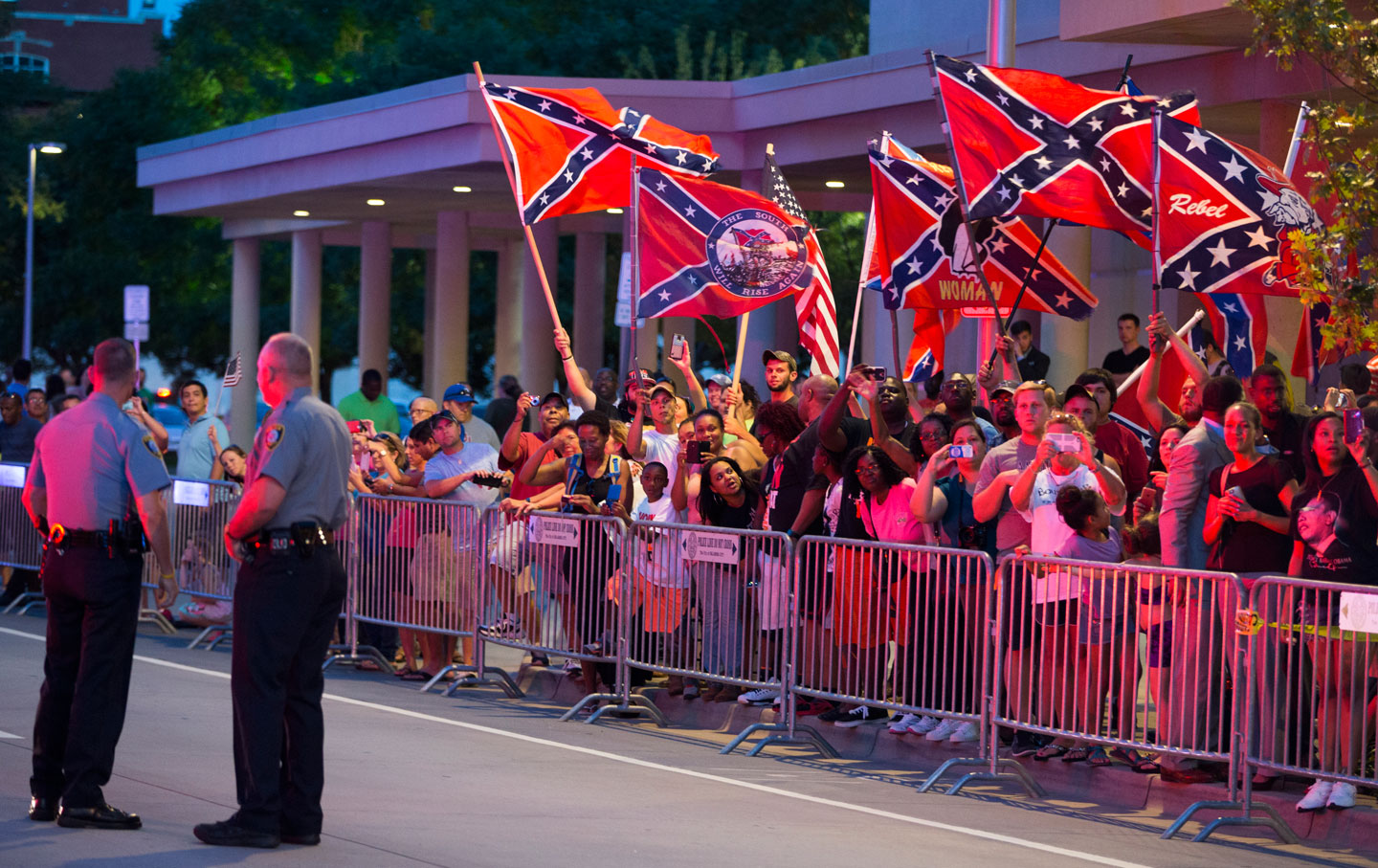 It was flying from the back of a souped-up pickup truck: the largest Confederate flag that I have ever seen, big as a bedspread. Across the center of the Battle Flag was emblazoned the image of a gigantic black assault rifle; across the bottom was written a challenge: Come and take me. I watched the truck proceed down the freeway like a perverse Mardi Gras float; it emerged from the peripheral field on my left side, whipped past, then continued down the highway and away, through the mountain pass beyond and into the V-shaped cleft of the horizon.

This happened in August, a busy month for racial conversation: the March on Washington, Hurricane Katrina, Michael Brown’s death. This also happened within days of Elisabeth Hasselbeck’s apparent attempt to Willie Horton–ize #BlackLivesMatter in time for the next election by labeling it a “hate group.” It was just days after Megyn Kelly’s assertion that black communities are “anti-cop. It’s sort of—people have called it the ‘thug mentality’…. That it’s cool to sort of hate the cops…and be somebody who doesn’t necessarily prize being there for your family, and so on.”

That fiercely flapping flag I saw was a mash-up: a remix, a derivative conjoining of different elements to make a new whole. I read those elements as misplaced belligerence about the “War of Northern Aggression” (we were, after all, in the North, a mere hour’s drive from the Canadian border) and a scary degree of allegiance to dark, murderous machinery.

At home later that evening, I chanced upon a YouTube video that I am eager to share: an ad for BuyConfederateFlagsFromaBlackGuy.com. The video advertises, in the words of James Joiner in The Daily Beast, taking “some of the guilt out of flying your colors by giving you good ol’ boys and girls the chance to shoot down that pesky racism argument right out of the gate—by supporting a black-owned business. It’s like having a ‘best friend who’s black,’ only better,” because you can order online and needn’t come into contact with anyone outside your “racially pure bloodline.”

A black student was supposedly offered a membership in the KKK after fighting to display the Confederate flag.

The site is parodic—but truth be told, it’s hard to tell sometimes. After all, George Zimmerman is selling his paintings of the Confederate flag to support a “Muslim-free” gun store in Florida. And there are a few African-Americans who seem genuinely content to be standard-bearers for the antebellum South: Byron Thomas, a black undergraduate at the University of South Carolina, is rumored to have been offered membership in the Ku Klux Klan after waging a brave fight to display the Confederate flag in his dorm.

I have nothing against Southern heritage. If it’s down-home, Southern Gothic nostalgia you want to celebrate, then by all means, mash up a flag to that: perhaps one with buttered biscuits, toddler tiaras, and cottonmouth snakes all nestled against a field of magnolia blossoms.

Seriously: It’s not the Southern romance but the Confederacy with which I have a problem. But the Confederacy, as bears reminding, lost the Civil War. The American flag—the one to which we make a pledge of allegiance—is the flag of the United States. That’s a dispositive legal distinction, not a whimsical or emotional one. The Confederate flag stands for the Confederate Constitution, which was virtually identical to the US Constitution but for one really important sentence: “No bill of attainder, ex post facto law, or law denying or impairing the right of property in negro slaves shall be passed.”

The mash-up of that message with an assault rifle is why I drove quite slowly behind the enormous pickup truck, letting the distance grow between it and me. I slowed my car intentionally to let the truck race on, backward into the future.

Recently, I heard Ashraf Ghani, the president of Afghanistan, hold forth in a nuanced discussion about borders, national identity, pluralistic pedagogy, so-called philosophical untranslatables, and the linguist Roman Jakobson’s concept of marked and unmarked terms. It was so impressive and sophisticated that I confess my brain wandered sideways to a parallel universe in which any given American politician brought such insight to the crisis at our own borders. We need more than Donald Trump as American interlocutor in these crucial global debates. It was this sad thought that weighed on me as I drove slowly in the wake of that enormous Confederate death threat, cowering at what ex post facto bill of attainder might await around the bend.

But power matters too. All lives are not treated with the same care, but are received differently as we cross from neighborhood to neighborhood, nation to nation, one social setting to another. In their rejoinder that “All lives matter,” the newly visible ranks of neo-Confederates ignore the responsibilities of power, instead labeling dissent as a “hatred of us.” They avoid the hard question lurking just beneath the surface: Who defines “us”?

The reality of our resource-stretched and war-torn globe is that the categories in which we put people—legal or illegal, refugee or economic migrant, black or white—determine survival. We struggle for ground and bread and fresh water. We draw down the gates, pull up the drawbridges. We pray and pack in for a place on the freedom train—which grinds to a halt when “they” climb aboard. We take each lost life and stack it as a win or a loss for “our” people.

All lives do not matter when we must sort the dead by sides.