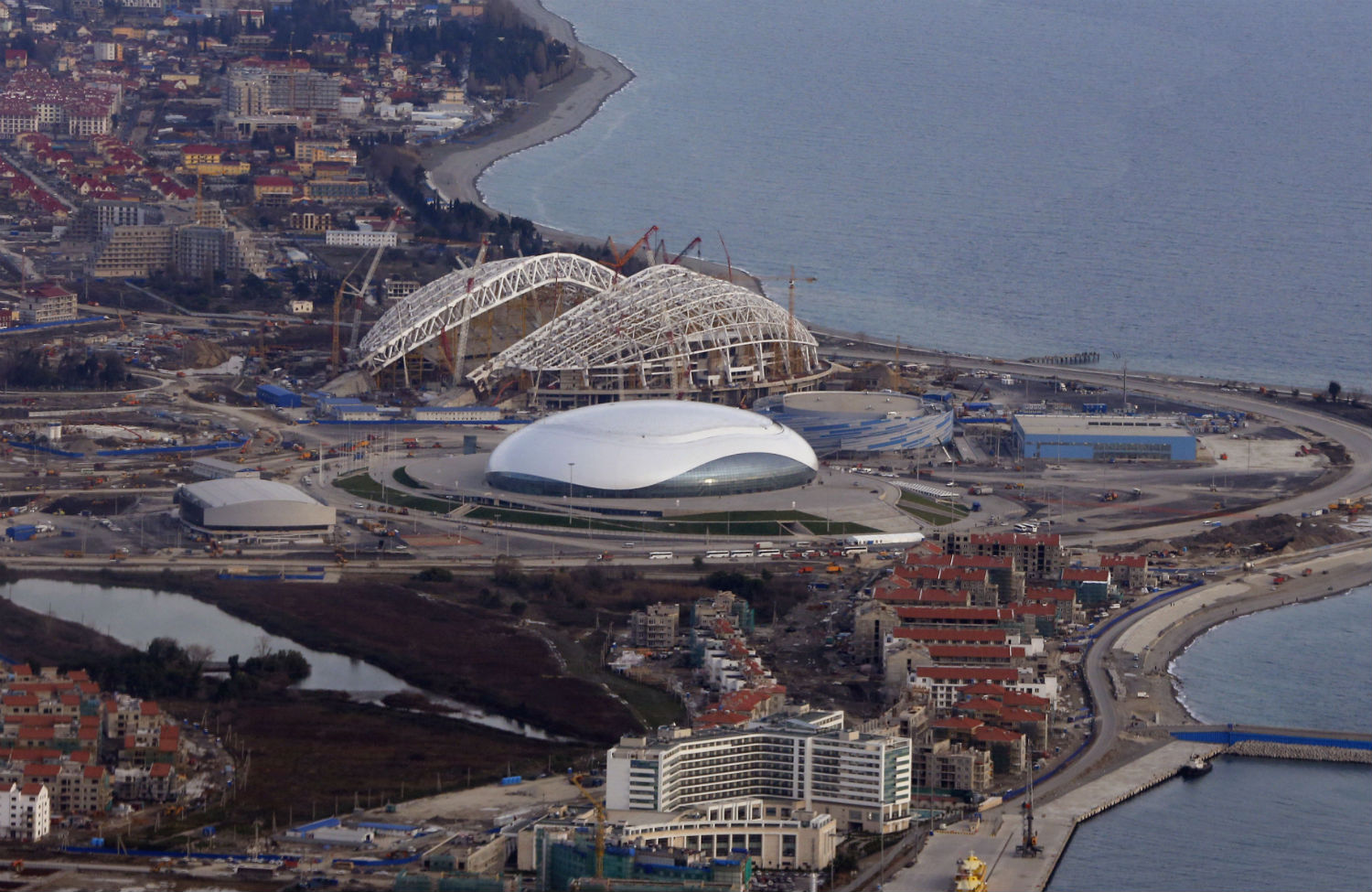 An aerial view of the Olympic Park in Sochi, Russia (AP Photo/Dmitry Lovetsky)

The $51 billion Sochi Olympics are already infamous for being the most expensive Games in history, and now 13,000 fellow journalists, including me, are here to see the results of all that spending.

So far, the foreign press has lambasted the Russian government for the huge budget expenditures while chronicling the slapstick comedies waiting to happen in unfinished hotel rooms. The Russian government’s reaction has been typically knee-jerk, with Prime Minister Dmitry Kozak declaring that only $6 billion was spent directly on the Games, as if the $8.7 billion “caviar road” to the mountain cluster of Olympic venues shouldn’t count at all.

But now that the Games have arrived and construction is winding down (it’s by no means finished), many locals are happy with Olympic-related improvements, including 400 public buildings and infrastructural elements, as well as new utility systems, roads and residential buildings.

“I have a positive attitude toward the Olympics,” said Andrei Tanichev, owner of Mayak, one of the city’s two gay clubs. “Before, we were tormented by traffic…. When snow fell in the mountains, the electricity would turn off for five days.”

But whether this development was worth the cost to taxpayers, let alone those residents who lost their homes, is another question. “In Russia it’s not customary to count the money, the main thing is that there was development,” another Sochi acquaintance told me.

Under that criteria, what did Sochi actually get for $51 billion?

A new beltway has diverted through-traffic around central Sochi and has taken the pressure off the main road running along the coast. As a result, driving the sixteen or so miles from downtown Sochi to the Adler district, where the Olympic stadiums are located, now takes about half an hour rather than two and a half hours.

With their iced-over sidewalks, high curbs, ubiquitous walking underpasses, general lack of elevators and no concept of pedestrian right-of-way, Russian cities are not known for being particularly friendly to people with disabilities, and the strung-out resort town of Sochi was no exception. But with the arrival of the Olympics, the city has been peppered with wheelchair ramps, tactile paving for the blind and, to the utter bewilderment of anyone who has lived in Russia, audio signals at major crosswalks.

In the old airport, arrivals were written up on the wall by hand and angry attendants yelled out departures over megaphones. Now Sochi has a modern airport that doesn’t transport you back to the Soviet Union as soon as you walk into it.

Anybody who’s read the classic Soviet novel Moscow to the End of the Line remembers the narrator’s alcohol-fueled adventures on Russia’s commuter trains, which even in Moscow remain dirty, smelly and overcrowded to this day. Not so in Sochi, where new city buses run often and commuter trains shuttle fans and locals ninety miles along the coast and through a huge new train station in the Adler district.

A whole lot of white elephants

Meanwhile, eleven huge athletic venues and countless related buildings have been constructed for the Olympics, and the local government apparently doesn’t have much of an idea what to do with them. In addition, forty-nine hotels with a capacity of 26,000 have been built, probably too much for Sochi’s tourist inflow, which has fluctuated widely in recent years.

My friend’s thinking aside, were these improvements worth the money spent? Not exactly. A recent report by anti-corruption crusader and opposition leader Alexei Navalny found that Russia spent twice as much as necessary to build at least ten of the Olympic venues, and even a governmental audit in 2012 found $430 million in “unreasonable” cost overruns.

This isn’t surprising when you consider that businessmen with close ties to the federal and regional leaders won many of the contracts. In a typical story of Russian business, companies belonging to Vladimir Putin’s old judo partner Arkady Rotenberg were awarded at least $7.4 billion of Olympic contracts.

Meanwhile, residents of the local village of Akhshtyr, where a quarry and illegal waste dump have polluted the environment, or Vesyoloye, where construction waste caused a large-scale mudslide, aren’t so happy with their piece of the Olympic legacy. Human Rights Watch has also reported that over 2,000 families were displaced by Olympic construction and not all of them fairly compensated.

This isn’t the end of Sochi’s woes. Now the local government has to figure out how to maintain the glut of new buildings and infrastructure, as well as mitigate the environmental damage (although there’s no guarantee they’ll do so). Its future as a winter sports destination is already in doubt, and proposals have included turning Sochi into a gaming zone or, most recently, a giant children’s athletic camp. “A lot of money was spent, a lot of damage incurred, and now we don’t know what to do with what we’ve got,” said Yulia Naberezhnaya, an activist with Environmental Watch on the North Caucasus.

I’m enjoying the new trains and smooth traffic as much as anyone, and it’s great that Sochi has reaped these benefits. But the fact that everyone admits this development cost more than it should have is a damning indictment of the pervasiveness of corruption and cronyism in Russia today, as well as an example of how it burdens taxpayers. And Sochi is going to have a much bigger Olympic legacy to swallow than other host cities.

Watch Next: Dave Zirin on the role for activists at Sochi.