Conor Lamb’s apparent upset victory in a Pennsylvania congressional district that Donald Trump had won by nearly 20 points has intensified talk of a Democratic wave in 2018. Lamb’s win is, in fact, evidence that Democrats have an excellent opportunity to recapture control of Congress this year. But in order to do so, it is critical that party decision makers understand just what a wave is—and what it isn’t.

In a nutshell, a wave happens when large numbers of one party’s base turn out to vote, swamping the ranks of their opponents. It is not a situation where a considerable amount of voters switch their party allegiances.

Many in the media, however, are already drawing the opposite conclusion about what Lamb’s win means—and what its implications are for November. The New York Times tweeted, for example, that the race was “the latest test of whether Democrats can make inroads with Trump voters.”

This interpretation may make for a good story, but it is bad analysis—and even worse political strategy. It stems from the fact that since Trump took office there has been a string of races in districts long seen as Republican strongholds where Democrats performed surprisingly well. In 2017, for example, Democrats won 14 of the 17 state legislative races in which party control flipped. The tempting story line is to conclude that voters in those districts are abandoning Trump and swinging their support to the Democrats. In mid-February, for example, Linda Belcher, a Democratic candidate in Kentucky, won a special election in a district that Trump had carried decisively Headlines trumpeted, “Democrats flipped a Kentucky state legislature seat in a district Trump won by 49 points.” CNN proclaimed, “A Democrat in Kentucky has won a state House seat in a district where President Trump won 72% of the vote in 2016.”

While technically accurate, such an analysis obscures the actual political trends that will likely determine the outcome of the 2018 midterm elections. To take an extreme example, imagine what would happen if every single person who voted for Trump skipped the upcoming midterm elections (perhaps there’s an Apprentice marathon on TV or something), and all of Hillary Clinton’s voters came out again to cast ballots. Obviously, every single Democratic candidate would win, even in districts overwhelmingly carried by Trump. This dynamic—Republicans staying home, while Democrats turning out to vote—is what accounts for Democratic success thus far. In the Pennsylvania race, for example, Saccone only got 53 percent of the vote that Trump got in 2016; Lamb won 80 percent of the vote that Hillary Clinton achieved that same year. Moreover, Lamb over-performed the most in blue Allegheny county—that’s where he clinched the election, not in Trump territory.

Enthusiasm gaps like this are what have historically determined who wins majorities in Congress. In 2006, after the reelection of George W. Bush, Democratic voters were much more motivated to vote in the midterms than were Republicans, who were content to just have their guy in the White House. Democratic turnout dipped by just 10 million voters that year, while twice as many Republicans, 20 million, stayed home, handing the Speaker’s gavel to Nancy Pelosi. Four years later, the pattern reversed itself. Thinking the job was done with Obama securely in the Oval Office, Democratic voter turnout dropped by 26 million people in 2010. Republicans, mad at the black man in the White House trying to give health care to everybody, came out in much larger numbers, and their drop off was just 7 million votes. The following chart illustrates the 2010 story. 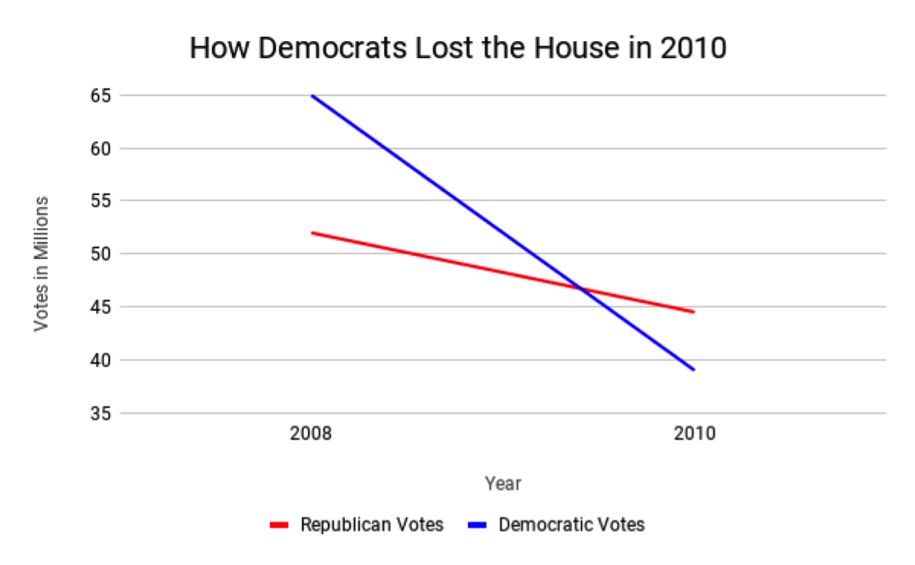 Looking at the Trump-era election results through the lens of voter turnout, the signs do in fact portend a coming wave. In the seven congressional and Senate special elections held since Trump was elected, Republican voter turnout has fallen 48 percent. Meanwhile, turnout for Democrats, highly motivated by opposition to the monsters in the White House, has fallen by just 23 percent. Democrats now need a net pickup of 23 seats to take back control of the House, and the landscape is competitive enough that they can secure a majority by exploiting the enthusiasm gap.

Buying into the myth that these districts are flipping because Trump voters are switching sides can lead to costly misallocations of resources, wasting time, money and energy, in the mistaken belief that it is possible to open closed minds. In fact, Democrats should be spending their precious assets in getting core Democrats to the polls, and not just with Election Day GOTV, but year-round.

Properly understanding this moment also informs what policy battles to prioritize. In deciding which causes to champion, are progressive political leaders trying to avoid offending Trump voters in the hopes that they’ll come over to the Democratic side? Or are they trying to inspire the people who opposed Trump in the first place to come back out and vote again?

The lack of courage and conviction to demand a solution for the Dreamers is a case in point. When Democrats had the leverage to insist that the country take care of these young people before any additional business proceeded, key Democrats were more worried that voters in their states or districts would be alienated by a government shutdown than outraged that innocent children of color were being treated as political pawns by a callous, anti-immigrant White House.

Over the course of this year, tens of millions of dollars and thousands of hours of volunteer time will be expended in the quest to take back control of Congress. The default Democratic tendency has been to prioritize television ads designed to convince Trump voters that Democratic candidates share their values and have their interests at heart. More important to Lamb’s victory and Democratic prospects, however is the nitty-gritty, door-to-door canvassing of labor unions and volunteers who mobilized thousands of voters in an election decided by a mere 600 votes.

What the Lamb win proves is that if enough people who have opposed Trump all along are sufficiently motivated to vote and get their friends and neighbors to vote, then we will have a wave election. And that wave will wash out the near-treasonous congressional enablers and install new leadership with a clear mandate to restore democracy, stand up to racism, sexism, xenophobia, and economic inequality.