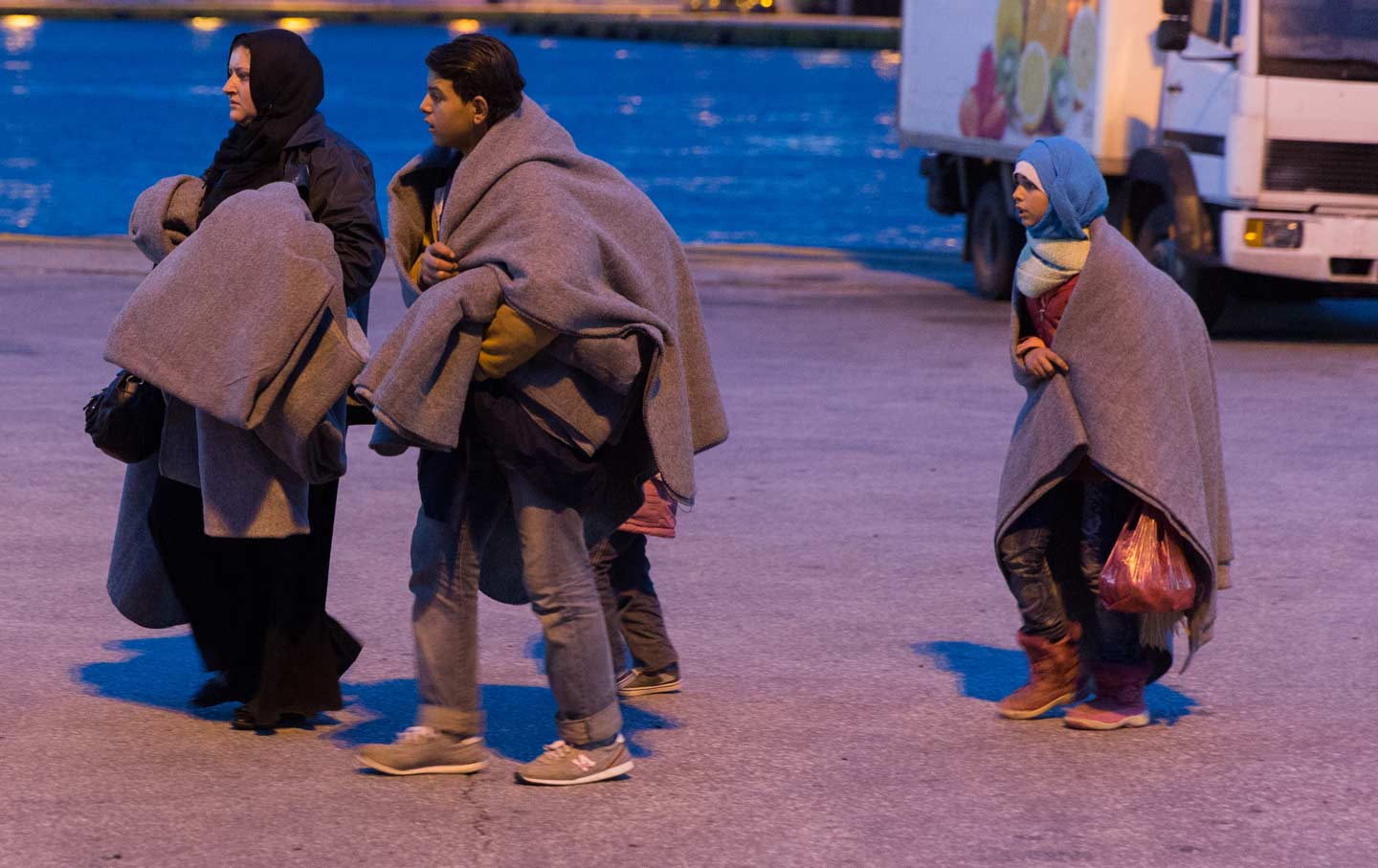 Since the outbreak of Syria’s civil war four years ago, the United States has accepted 2,174 Syrian refugees—fewer people than live in the happening metropolis of Red Lodge, Montana. Meanwhile, according to The Guardian, about one in five people in Lebanon is now a recent arrival from Syria.

The EU, where fear of migrants is rampant, even though zero Syrian nationals were involved in the Paris attacks, has committed to resettling 120,000 refugees. Canadian authorities have admitted more Syrians in the last year alone than the United States has since 2011. The UK has already granted asylum or humanitarian protections to 4,200 Syrians.

Meanwhile, Congress is howling to defund already-besieged resettlement programs. We’ve substituted frothing nativism for what Calgary mayor Neheed Nenshi says his constituents are asking—namely, “How can I help?”

For the tiny handful who make it from Syria to America, the struggle for survival doesn’t end at Customs. Once they’ve navigated an incredibly demanding multi-year admissions process, refugees—especially those 2,000-odd Syrians—arrive to a minimal, increasingly underfunded, and largely third-party infrastructure for aid and resettlement.

We’ve substituted frothing nativism for what the mayor of Calgary says his constituents are asking: “How can I help?”

Syrian escapees from ISIS and Assad receive the same treatment as asylum-seekers from any other country: The third-party resettlement agencies that handle their cases get a “basic necessities” grant of $1,975 per refugee, a little more than half of which is spent on housing and other needs; the remainder goes to agency overhead. They’re eligible for eight months’ Medicaid, TANF, and food stamps. They’re expected to pay back the cost of their transit to the United States in its entirety while figuring out how to become productive members of a completely new society.

The Office of Refugee Resettlement once provided multiple years’ funding and assistance to new arrivals. Even prior to the current defunding drive, it’s gradually been stripped of those resources. The American situation stands in stark contrast to Canada and the EU’s state-managed efforts to support and invest in their new citizens-to-be.

But it also leaves Americans in a position to help. Refugees arriving here are allotted one suitcase apiece, under 50 pounds; most arrive with less than Americans might take on a long vacation.

Refugees often rely, in applications for residency, on non-profit organizations such as the International [formerly Iraqi] Refugee Assistance Project (IRAP) of the Urban Justice Center. Once arrived, they’re largely in the hands of “VOLAGs”: voluntary agencies such as the 130-plus-year-old HIAS and Catholic Charities’ Refugee Resettlement Program, among many others who have devoted long hours and incredible effort to help migrants get their feet on the ground.

Syrians—and most migrants—are in need of a gamut of goods and services, so these and other aid organizations can sometimes accept not only financial support but clothing, furniture, books in Arabic or English, donated cars, discounted apartment rentals, food, work-training in any field, educational materials; anything that goes into starting a new life abroad. Medical Teams International provides a guide to assembling and sending aid packages for refugees. But, in general, cash funding for resettlement organizations is the most valuable factor in supporting those agencies’ work.

Refugee aid agencies live on donations and volunteer efforts. They seldom have enough of either.

“If someone wants to roll up their sleeves,” says The List Project’s founder, Kirk Johnson, “they should reach out to one of these groups and ask what they need.” The List Project has worked with Iraqi refugees—those who are in extreme danger after aiding US agencies—since 2007. IRAP and others aid refugees from many countries; No One Left Behind, based in Washington, works with Afghans and Iraqi interpreters who have worked with the United States.

No One Left Behind provides a variety of services to those families, and accepts donations of all kinds. These agencies’ funding varies, and although some larger and better-established organizations are comparatively stable, all have felt the effects of a dearth of funding for refugee care and services. Smaller groups such as the Syrian Community Network rely largely on private donations and partnerships with other organizations.

In-kind aid is vital as well: Can you provide asylum-seekers with legal counsel as an attorney, or conduct research on their behalf as a law student? Provide some form of pro bono medical care? Help translate cascades of confusing documents, or assist people in seeking work or applying for social services? Do you employ any labor? Do you know someone who does?

Numerous refugees arrive with years of experience in specialized fields—from skilled barbers to doctors to writers and engineers—but encounter overwhelming difficulty in obtaining certain licenses (doctors, for instance, will seldom be able to practice in the United States) or in navigating an often-tangled path to hiring opportunities.

The International Rescue Committee, based in New York, accepts both volunteers and donations for its many programs, as do most other organizations. The United Nations sometimes features Syria-related material on its Online Volunteering portal.

Finally, Hand in Hand for Syria is among the very few organizations committed to aid and rescue work within Syria, and needs whatever funding it can get—they accept donations here. And Charity Navigator provides a rated list, with detailed analysis, of charities and other NGOs assisting with the Syrian crisis.

With the recent tide of congressional fear-mongering on asylum-seekers from the Middle East, progressive outlets have emphasized phone and letter-writing campaigns to elected officials, and these are valuable too. But even with a promised increase from the Obama administration in refugee admissions for the coming year, which the White House has committed to stand by, too many of those who pass grueling screenings are still left high and dry. Refugee aid agencies, like other aid organizations, live on donations and volunteer efforts. They seldom have enough of either.