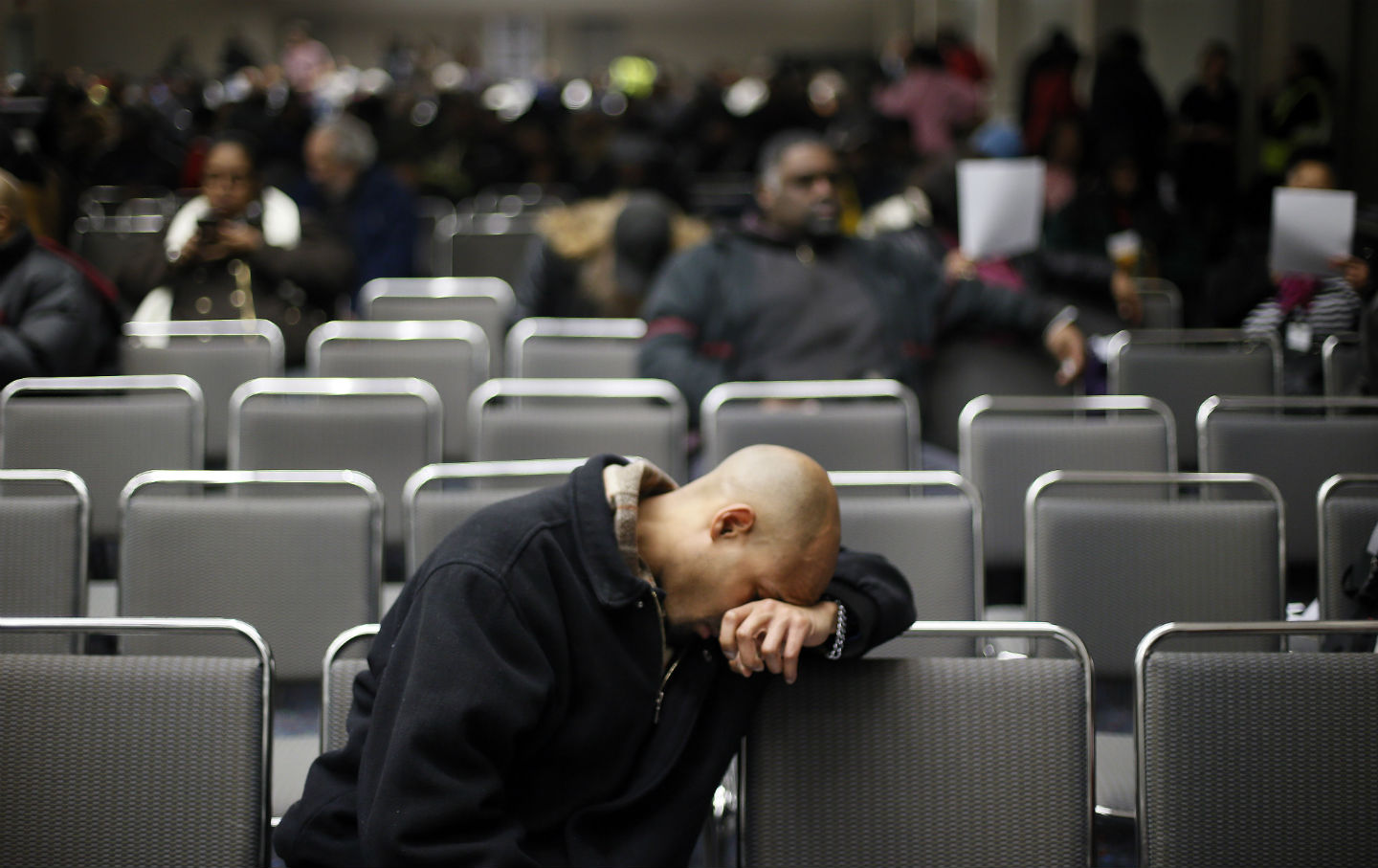 Hundreds of Detroit homeowners at risk of losing their property are flocking to hearings that offer them a last-ditch chance to avoid foreclosure. (AP Photo/Paul Sancya)

“Another Round of Detroit Refugees?” by Laura Gottesdiener. TomDispatch, April 19, 2015.

As Detroit faces tens of thousands of tax foreclosures this month, Gottesdiener – who quite literally wrote the book on foreclosure – takes us inside the bureaucracy of these cases, the yearslong fight by residents to save their homes, and the dangerous “foreclosure conveyer belt” that has emptied the city.

The family of Deion Fludd accuses the NYPD of beating their 17-year-old son and placing his body on the tracks of the A-train. The NYPD says Fludd ran into a subway tunnel to evade arrest. Former Nation intern Aaron Miguel Cantú investigates and finds the police version of events lacking.

“Anchorman: The Legend of Don Lemon,” by Taffy Brodesser-Akner. GQ, May 2015.

A good friend once said to me, “Don Lemon is black, gay, and still doesn’t get it. Somebody at GQ must owe CNN a favor because this profile paints a much more complicated picture of a man…an anchorman…whom above all else “just keeps on going.” What becomes clear is that despite Lemon’s embarrassing gaffes over the past year (Ferguson, Cosby, ISIS, etc.), he is a prized commodity, one CNN refuses to let go gentle into that Brian Williams goodnight.

In Israel, Palestinian children are subject to abuses that UNICEF has said breach international human rights law, are tried in military courts and can be sent to military prisons for up to 20 years for offenses such as stone throwing. This article points out that such abuses contribute to rising rates of untreated psychological trauma while disrupting children’s education and fueling a continuous cycle of resentment, and says it’s time Palestinian children are given the same access to “alternative-to-prison programs including continued education, mental health treatment, and detention prevention” that is given to Jewish Israelis.

Benjamin Hattem focuses on Israel/Palestine and the broader Middle East, as well as economic inequality, homelessness, and the prison system.
@BenHattem

“The Whistleblower’s Tale: How An Accountant Took on Halliburton,” by Jesse Eisinger. ProPublica, April 21, 2015.

An impressively detailed, lucid story on Halliburton’s fraudulent accounting practices and the company’s long legal battle against a whistleblower who brought their case to the SEC.

“Refugee Camp Is Under Attack From Assad and ISIS,” by Jesse Rosenfeld. The Daily Beast, April 15, 2015.

There is “virtually no escape” for those living in the Yarmouk refugee camp, writes Jesse Rosenfeld. Between 14,000 and 16,000 residents are being bombed and shelled by both ISIS and Assad’s forces as the Syrian civil war continues to escalate. The Yarmouk refugee camp is spiraling into an even greater humanitarian crisis as they lack food, water, and medicine: “There are desperate scenes as some [residents] come out to scour the area under sniper fire and shelling and look for wells.”

While the jury is still out on O’Malley, the former Baltimore mayor and governor of Maryland who may or may not have been the inspiration for the ambitious Tommy Carcetti on HBO’s The Wire, if he decides to run for president he just might have the type of fiery candor that will resonate with the general electorate. Let’s be honest, Hillary Clinton’s campaign began shortly after her tenure as Secretary of State and it will be quite difficult for grassroots organizers to get excited about “the inevitable.” Unless we all want flammable faucets (see Global Shale Gas Initiative) it would be a welcome sign to see a candidate enter the race who can draw a stark contrast to Hillary’s positions.

“ON WHITENESS AND THE RACIAL IMAGINARY,” by Claudia Rankine and Beth Loffreda. Lithub, April 9, 2015.

I’ve read, and then re-read, and will continue to read this essay, which, if I tried to quote from, would need to quote it all. I hope you read it too.

At the recommendation of The Nation‘s new staff member, Vanessa Dunstan, I listened to this podcast on the extent to which housing discrimination persists, though often invisibly, in New York and throughout the country. After the passage of The Fair Housing Act in 1968, HUD Secretary George Romney—yes, Mitt Romney’s father—went under Nixon’s nose and spearheaded an interpretation of the act that “affirmatively further[ed]” integration. Nixon, desperate to hold onto his Southern constituency, replaced Romney and shut down the program, with detrimental effects that last to this day.

In this essay, world-renowned photographer Sally Mann discusses her much-critiqued book of photos, “Immediate Family,” and reflects on how these photographs, and their controversial focus, informed her career. Mann writes that her photos are art, should be appreciated as such and allowed to stand alone to convey their individual messages.