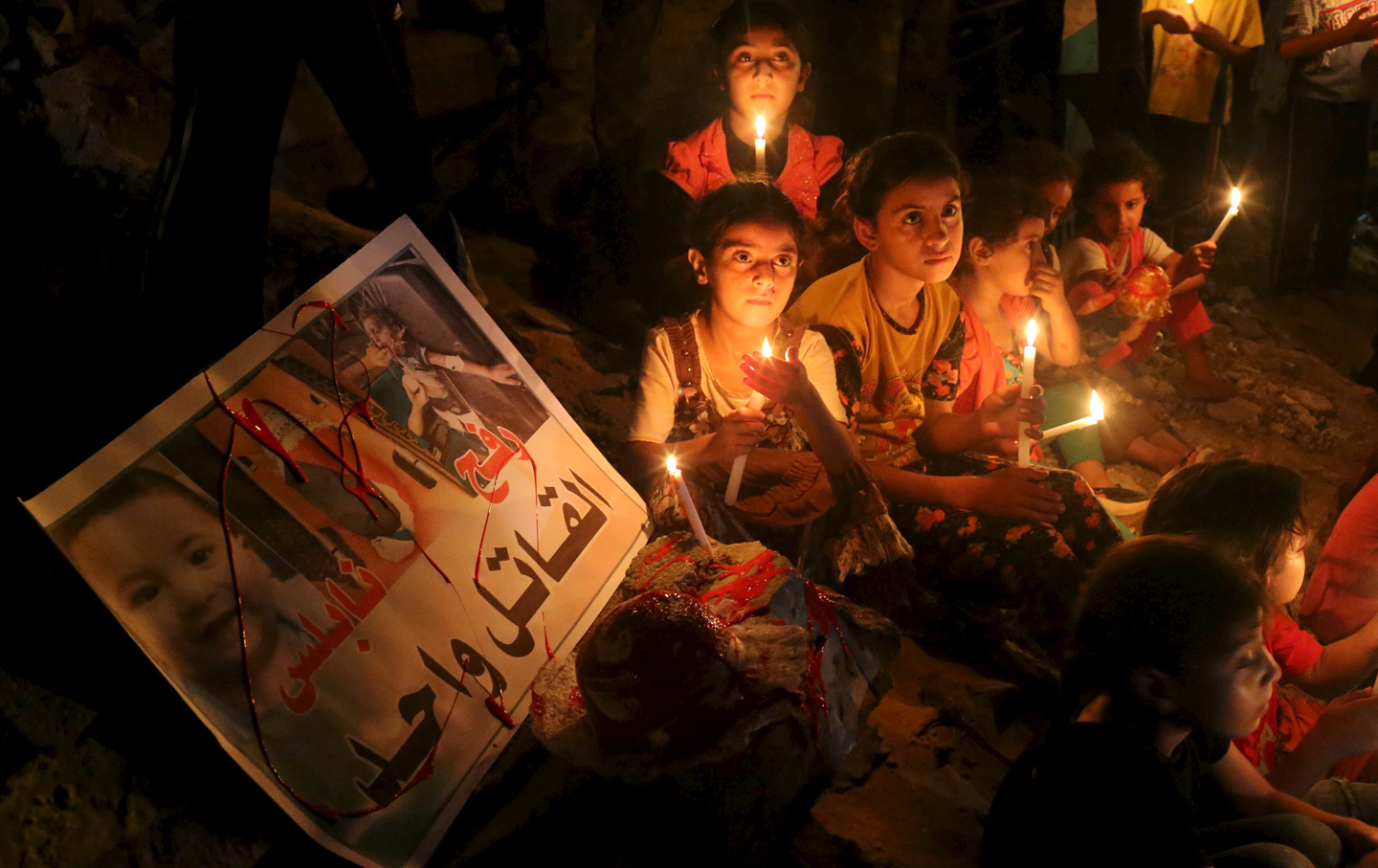 Palestinian children light candles during a rally to remember 18-month-old Palestinian baby Ali Dawabsheh, who was killed after his family's house was set on fire in a suspected attack by Jewish extremists. (REUTERS/Ibraheem Abu Mustafa)

Duma, West Bank–Eman and Mamoun Dawabsheh’s five children might have burned to death in the early morning hours of July 31, when Israeli settlers snuck into Duma, the West Bank village where they live, and tossed firebombs into their home. Fire entirely decimated the room where the boys usually sleep. The heat of the blaze melted the television that 17-year-old Moatasem sometimes falls asleep watching. Fortunately, the family was in Nablus.

“We had been planning to come home [the night of the fire] but my husband had another [construction] job, so he said, ‘Let’s stay in Nablus another week,’” Eman said.

Gaza’s Mental-Health Crisis and the Trauma of Permanent War

Mamoun’s brother called them at 2 a.m., saying their house was on fire. Eman and Mamoun rushed back to their village, thinking the fire was likely caused by faulty wiring and thanking God that no people were in the house. “Material things are not precious like human beings,” Eman said. While en route, however, she learned that the house of her neighbors and distant cousins, Sa’ad and Riham Dawabsheh, was also on fire. “I said [to myself], ‘Please God, don’t let them be home now.’ ”

Only upon seeing the crowds of people, cars, and fire engines did Eman learn that Sa’ad and Riham had, indeed, been home. They and their 4-year-old son Ahmed had been pulled from the blaze with severe burn injuries. Eighteen-month-old baby Ali was still trapped inside. Soon after, Ali’s body was located in the charred house.

Though Eman didn’t see the baby’s corpse, she was told that it was burned and blackened beyond recognition. Riham, Sa’ad and Ahmed were rushed to hospitals in Israel, where Riham and Ahmed remain in critical condition. Ali was buried in the village cemetery later that day. Sa’ad died from his wounds early morning Saturday, August 8. The toddler’s death made headlines around the world, sparking both international outrage and the protest of thousands, both inside Israel and the occupied Palestinian territories.

“The boy, the child, Ali—his mother called him Aloush,” Eman said, describing the toddler as always smiling. “I’d open my window, see her hanging clothes and he would go jumping around her. She’d call, ‘Aloush! Please stop!’ She was afraid he might fall down. ‘Be careful, be careful!’ I hope she will be alright…” Eman’s voice cracked, and tears came. Riham was more than a neighbor; the two women were close friends. The killing of Ali Dawabsheh was not the first act of murderous violence in Israel and the occupied territories in the past week, nor was it the last. The settlers’ attack in Duma came hours after a violent stabbing at Jerusalem’s Gay Pride parade. Yishai Schlissel, an Ultra-Orthodox Israeli man, injured six marchers, ultimately killing 16-year-old Shira Banki. (Schlissel had been recently released from prison, where he had served a 10-year sentence for having attacked the 2005 Pride parade in the same fashion.)

Moriel Rothman-Zecher, an Israeli activist and blogger, was marching in the parade. A few hundred meters ahead, he saw the crowd scatter and begin to scream. He heard someone call out that people had been stabbed.

“We went to sleep shaken up, mourning, horrified and praying for the people who were stabbed in Jerusalem,” Rothman-Zecher said. “And then to wake up and hear that a family had been badly burned and their tiny baby had been murdered in the West Bank, it felt immediately very connected.” Maayan Dak, an Israeli lesbian activist against the occupation, and the co-coordinator of the Coalition of Women for Peace, agreed. “In a society that is so far away from tolerance, this is what you get. You get extreme settlers attacking people in South Hebron Hills, you get people burning schools, you get people burning babies alive, you get stabbing at Pride parade.”

As the days pass, however, Rothman-Zecher finds it increasingly important not to lump the two incidents together. “The most important context for the West Bank killing is the occupation,” Rothman-Zecher emphasized. “The occupation, by virtue of it being a system of inequality, has as its basis the view that Palestinian lives are less valuable than Jewish lives.”

Yet Dak and Rothman-Zecher both point to a near universal condemnation of both attacks from the vast majority of Israeli society as a common, optimistic thread. “I do think there’s a real value that there’s this outpouring of societal compassion, and this across-the-board condemnation of bigoted violence in response to both murders,” says Rothman-Zecher. “The next step is that it becomes incumbent upon the organized political left to take this real compassion and real anger and help channel it against all forms of discrimination.”

Dak argues that although most Israelis think it’s terrible that a baby was murdered, they don’t see the connection to the wider picture of oppression and violence in Israeli society. “It’s a good sign that people are not totally indifferent,” Dak said. “But I’m not sure it’s a good thing that people are shocked by specific peaks of violence, because it covers up the daily reality…. People think there’s a few crazy lunatics in the settlements who think it’s okay to kill Palestinians… ‘It’s not us, it’s not the Israeli state, it’s not Israeli policy. It’s just a few crazy men.’ ”

The Israeli government’s response to the settlers’ attack—condemning the individual arsonists, but disconnecting it from the larger occupation—reinforced Dak’s point. “This is an act of terrorism in every respect,” Prime Minister Benjamin Netanyahu tweeted. “The State of Israel takes a strong line against terrorism regardless of the perpetrators.”

Eman Dawabsheh takes a cynical view of the Israeli government’s outrage over the attack on her family and neighbors. She believes the Israeli government condemned this attack by Israeli civilians in order to distance it from state-sponsored violence. Israel needs the world to see Palestinians as terrorists, not Israelis. “They want any attack from them to be from their soldiers, [portrayed as] self-defense, to say, ‘We are not like them.’”

Indeed, Leehee Rothschild, a queer political organizer in Tel Aviv, links the violence perpetrated by Israeli civilians in Duma to violence perpetrated by the Israeli military during the confrontations that occurred in its aftermath. “A Palestinian family was burnt, a baby was killed, and instead of understanding and containing the ensuing protest and outrage, the Israeli army violently oppressed them and killed two more Palestinian youth.” Laith Alkhaldi as a small child, with his older brother and sister on either side of him. Courtsey the AlKhaldi family

This link is not lost on the family of 15-year-old Laith Alkhaldi. According to his aunt, Samah Khuyyat, Laith left the house the afternoon of July 31, telling his family he was going out to play with friends. News of the murder of baby Ali Dawabsheh reached him later that morning. He went to Atara military checkpoint with friends. “Laith wanted to find some way to let out his anger,” Samah said. Another one of his aunts, Hana Khuyyat, insisted that “his stand there did not reflect any danger to the soldiers.”

The Israeli military claimed in a statement to me that Molotov cocktails had been thrown by Palestinians at an Israeli military position near the West Bank town of Bir Zeit, and that in response soldiers “opened live fire, seriously injuring one.” That one was Laith.

The family got a phone call informing them that Laith had been shot in the chest. The teenager was rushed to the hospital in Ramallah where he died a few hours later.

The bulletin board in the back bedroom is covered with photos of Laith’s childhood. His aunts describes a smart boy (especially talented in math and music) who loved to breed dogs, cats and rabbits. Laith’s family half believes it’s all a dream, and that they will wake up and find Laith between them again. “Laith is coming back,” his 17-year-old brother, Yazan, insists. Laith’s aunt Hana, has been sleeping in the same room as Yazan, trying to calm his fear. Even with her there, she said, Yazan has not been sleeping. Yazan’s twin sister, Tala, can barely hold her head up, or speak.

Laith was not killed in a cycle of violence, Hana insisted. “It’s not a cycle of violence, it’s a cycle of violations.” Israel must end its occupation entirely, she said. Palestinian activist and organizer Saeed Amireh wants to see Palestinians doing more to bring about that day. “People can stand by us, support and be in solidarity with us, but no one can struggle for us if we don’t struggle by ourselves,” he said.