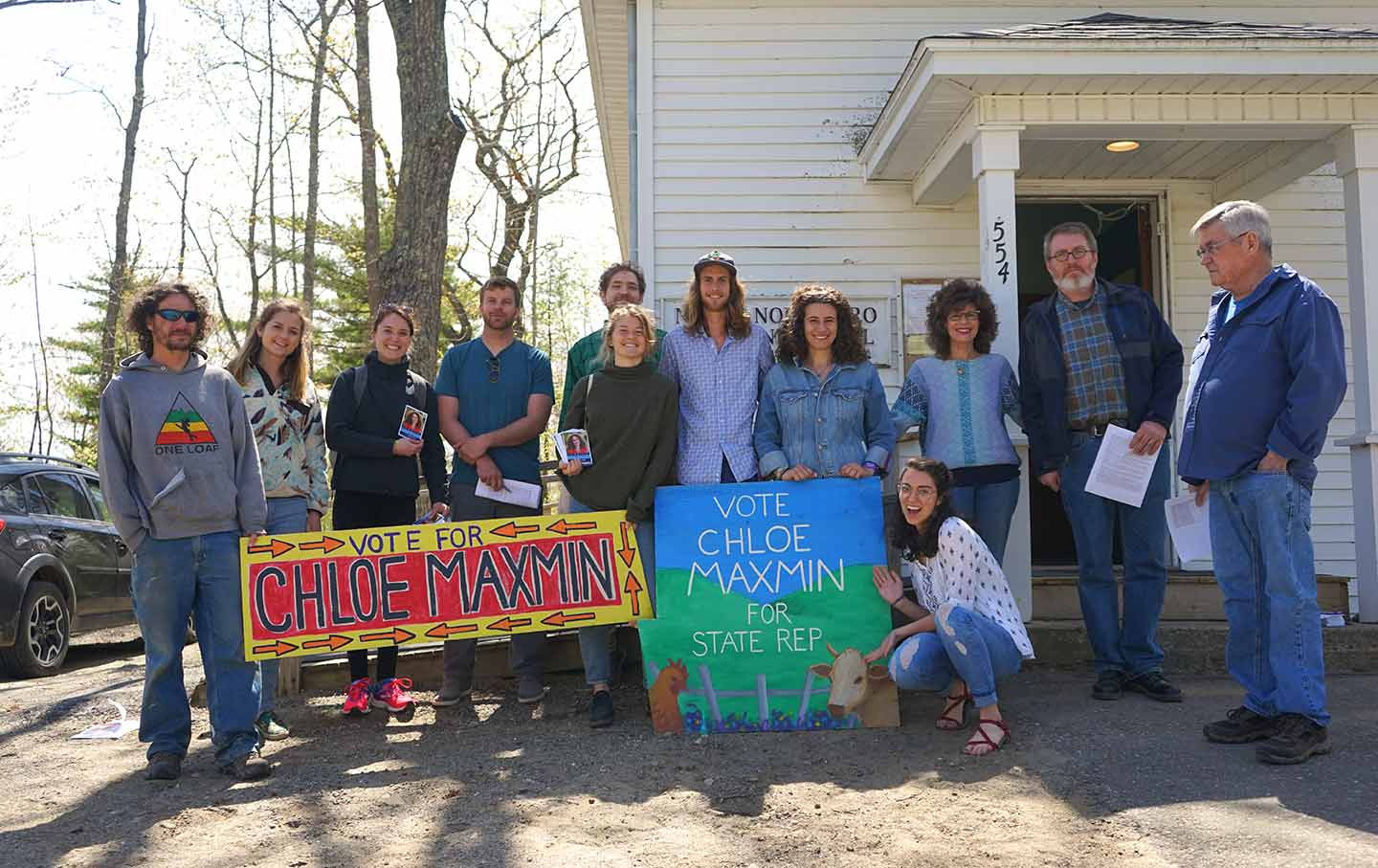 Chloe Maxmin (standing, fourth from right) at a volunteer-training event in May 2018. (Photo: Mattea Mrkusic)

Far from the bright lights of the Bronx, where a fiery star rightfully dazzles the left, there is a trailer at the end of a dirt road in the most rural county in the most rural state in the nation. All the curtains are drawn. I knock on the door. A man emerges from a cloud of cigarette smoke, skeptical of the stranger on his doorstep. “Hello, my name is Chloe Maxmin. I’m running for state representative. I was stopping by to say hello and listen to any issues that you’re thinking about this year.” He invites me inside. As a young woman canvassing alone in the middle of the woods, the worst thoughts cross my mind. I dismiss them. We simply talk. At the end of our conversation, he says: “You’re the first person to listen to me. Everyone judges what my house looks like. They don’t bother to knock. I’m grateful that you came. I’m going to vote for you. Thank you.”

These are the conversations that we have every day in rural Maine House District 88, where history is being made. We are two young community organizers with a friendship forged in the fire of campus activism whose love for the small towns in which we were raised called us back to our rural roots to build political power in traditionally conservative districts. Chloe, age 26, is the candidate. Canyon, age 25, is the campaign manager. On June 12, 2018, we won our Democratic primary with 80 percent of the vote. Two towns ran out of ballots as more people showed up to vote for Chloe than had voted in any previous Democratic primary, breaking record turnout by 41 percent. We’ve been endorsed by President Obama, MoveOn.org, the former head of the US Small Business Association, and many local organizations. Now we head toward November, seeking to be the first Democrat ever to win this Maine House seat. One thing is clear as we canvass rural roads, talking to Republicans, independents, Democrats, and the unregistered: The left abandoned rural America, leaving its citizens behind. Our campaign shows that building true representational political power in 2018 and beyond requires investing in state-level politics that translate progressive values to the realities of rural America and revive faith in local political movements.

The story of Maine District 88, which includes Chelsea, Whitefield, Jefferson, and part of Nobleboro, is the story of so many communities left behind by politics-as-usual. Chelsea is a working-class town in Kennebec County with one of the highest property-tax rates in the state. The other towns are in Lincoln County, which is the most rural county in Maine and the oldest county in the nation. Health-care costs leave most people in the district one emergency room visit away from financial disaster. Local schools struggle with shrinking budgets. Nearly 20 percent of our children live in poverty.

As organizers, we see that politicians ignore the will of the people. This pattern is clear in Maine. Since 2016, Maine voters approved five citizen initiatives—to fund schools, institute ranked-choice voting, expand Medicaid to 70,000 Mainers, increase the minimum wage, and legalize marijuana. All of these initiatives were either drastically altered or altogether ignored by our state government. Our governor has vetoed more bills passed by the legislature than all sitting governors since 1917 combined.

Our campaign in District 88 is more than just a small House race. It is an opportunity to pioneer new ways of restoring faith in politics, fighting for our overlooked communities, and listening to all perspectives. Our political system may fail us. We may be disillusioned. But everything that we care about circles back to politics. Our individual well-being revolves around our collective responsibility to hold our politicians accountable. We simply cannot afford to give up on politics.

Our House race has unlocked four key lessons for the left to author a new future. 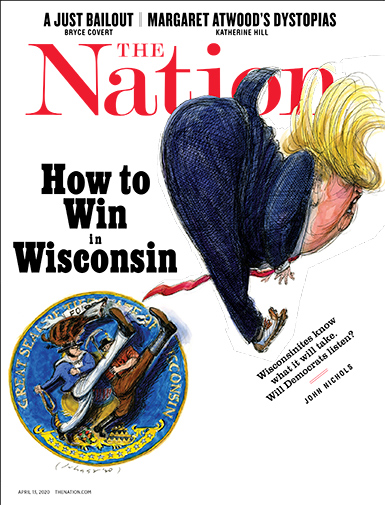 We must adjust course in order to reclaim local politics. The imperative to uncover common ground from beneath the scorched earth of division has never been more urgent. In our House district, we can talk with every voter, listen, understand, and learn from all perspectives. We organize sign-painting parties with local artists, house parties with neighbors, canvass days with friends, and celebrations with local bands. We build relationships to reengage citizens and restore faith in politics. We are empowered with a new understanding that each voice and vote truly counts, as these races are often decided by just hundreds—or even dozens—of votes. Change occurs when we recall the strong values that bind us through authentic conversation, dignified disagreement, and mutual respect.

Second: Youth leadership can ignite change. Millennials are on the verge of surpassing baby boomers to become the largest living generation in 2019. We are the largest voting bloc in America. Yet, we are grossly underrepresented in American politics, with only eight millennials currently in Congress. The average age of the Maine legislature is 54. Still, both parties keep running the same candidates who bring the same perspectives to a broken process. We need fresh points of view, creative energy, and passion injected into politics.

Young people across the country are running for office, engaging vigorously with politics, and organizing for candidates and causes. We came of age in the Great Recession, 40 percent of us saddled with student debt, all looking toward a future of climate chaos. We are keenly aware that politics-as-usual is failing every American except the rich and powerful. Almost two-thirds of us “have more fear than hope” about our democratic future, and 77 percent of us blame politicians. Now we are one of the most politically active generations in history. In District 88 and beyond, everyone is fed up with the current political climate. It is time for something new.

Third: We need to focus on the rural. Victories of leftist insurgents such as Alexandria Ocasio-Cortez and Ayanna Pressley are vital, but the Democrats’ biggest challenges are not in New York City or Boston. Look at the map of the 2016 election results. The first thing that struck us on that fateful November day: Hillary won almost every urban center, and Trump swept the rural vote. The greatest support for Donald Trump came from small rural towns like ours. From 1999 to 2009, neither party held a significant advantage among rural voters. Today, Republicans have a 16-percentage-point advantage.

As staffers on numerous campaigns in multiple states, we witnessed the Democratic establishment’s neglect of rural areas. We’ve seen state campaigns siphon volunteers from rural races to boost urban turnout. On one campaign, funding that was promised by the state caucus was withdrawn at the last minute to pay for TV spots in metropolitan markets. On a daily basis, we talk to voters who haven’t been contacted by a Democratic campaign in more than a decade. Even Tom Perez, Democratic National Committee Chair, said in a recent interview that “you can’t door knock in rural America.”

The reasons for this shift are complex. But, after knocking on thousands of doors in rural District 88, we see the consequences of a failed political calculus. No one has taken time to listen to people’s stories, struggles, hopes, and needs.

Fourth, and most important, campaigns are the new social movements. What if we looked at political races as social-movement campaigns? They provide us with the opportunity to organize, listen, connect, create community, and build leadership. In 2008, Barack Obama built a grassroots political movement, but on Election Day he essentially said, “Go home. I’ve got this.” In the words of Marshall Ganz, the great organizer behind Obama’s 2008 campaign, Obama “demobilized the widest, deepest and most effective grass-roots organization ever built to support a Democratic president.” In the decade that followed, the left lost massive amounts of political power.

Bernie Sanders understood Obama’s squandered opportunity. In 2016, he articulated a transformational vision of political revolution. He encouraged people to run for office at every level and engage in a movement that would outlast his campaign. Bernie told us that “real change never takes place from the top on down…. It always occurs from the bottom on up.” That is why we look at our House campaign as part of a larger social movement. We use the same organizing tools as with community organizing, but our aim is explicitly political.

These four doctrines are the foundation of our campaign. We dig into the local, cultivating relationships and utilizing the resourcefulness of our rural communities to build a rooted movement. We understand and embrace our power as a young political generation on the rise, ready to take leadership and transform the system. We see that rural America is alive and beautiful, eager to be heard and remembered. Many have welcomed us into their homes and honored us with stories of family members who are registering to vote just for our campaign, who are voting Democrat for the first time, who have never voted in a midterm but now are because our movement gives them hope. We view our campaign as a movement, built on shared values and authentic conversations. We build real political power, with lasting muscle for the long fight, with an inside-outside movement that elects authentic representatives to fight for everyone and continues to organize beyond the election to maintain pressure on our politicians.

November 6 must be the day that we all rise up to definitively take ownership of our democracy and author our own future. Until then, we’ll be mobilizing voters. We trust that you will be too. After all, there’s no better October evening than one spent bouncing down long dirt driveways riddled with potholes, meeting new people, listening to their stories, and encouraging them to use their power to help write history.