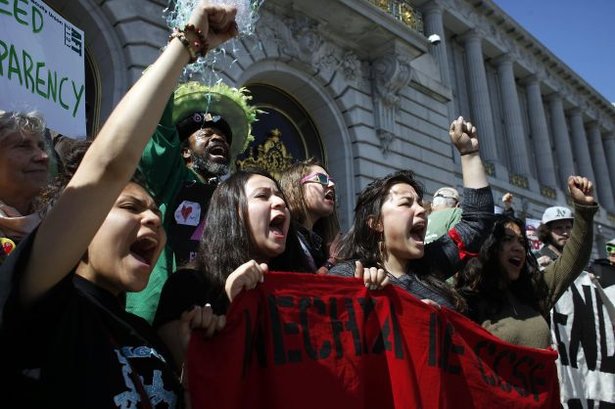 Last spring, The Nation launched its biweekly student movement dispatch. As part of the StudentNation blog, each dispatch hosts first-person updates on youth organizing—from established student unions, to emerging national networks, to ad hoc campaigns that don’t yet have a name. For recent dispatches, check out January 27, February 10, February 26 and March 7. For an archive of earlier editions, see the New Year’s dispatch.

On Thursday, March 13, more than 200 students and faculty rallied at City College of San Francisco calling for the immediate resignation of special trustee Bob Agrella, appointed by the state to restructure CCSF under threat of disaccreditation, and the end to a payment policy that discriminates against undocumented students. After marching across campus, students attempted to enter the administration building before being stopped by police. After the administration called in SFPD, the violence escalated: cops stormed the crowd with batons, hitting students and firing pepper spray, resulting in myriad injuries. Meanwhile, fifteen students took over Conlan Hall—and held it overnight. Following the incident, Chancellor Arthur Tyler blamed students for the brutality, labeling the peaceful protest a “violent outburst” by students—despite clear video footage to the contrary, ultimately leading the district attorney to drop all charges. On March 18, the chancellor and vice chancellor met with protesters to discuss the payment policy, which requires out-of-state and undocumented students to pay tuition fees up front or sign onto a stringent payment plan. Administrators dismissed the demand to abolish it. Save CCSF students are committed to escalating the mobilization until our demands are met.

2. At the Border, Hundreds Mass for Entry—and Release

In December, Alex Aldana made the decision to return to Mexico to care for his sick grandmother. During his time outside the US, Alex dedicated himself to organizing with families who previously faced deportation or, like himself, had left the country due to a family crisis. This month, working alongside National Immigrant Youth Alliance, Alex assisted more than 150 people in presenting themselves at the US border Otay Point of Entry to return home. This transnational effort is a continuation of the #BringThemHome campaign, launched last year to push the US government to confront the human cost of our broken immigration system. Thus far, ICE has sent most of the families to detention—going as far as detaining children who crossed with their parents, and who are US citizens. A petition is circulating on DreamActivist.org calling for Alex’s release.

On March 18, Students Allied for Freedom and Equality at the University of Michigan presented a resolution to the Central Student Government to divest from companies that profit from human rights violations in Palestine. When the agenda arrived at the resolution, CSG immediately passed a motion to table the resolution indefinitely, with a final vote of 21-15-1, before giving students the opportunity to discuss the resolution—effectively silencing the hundreds of students present in support of the resolution. This decision immediately ignited the chanting of “divest” as CSG adjourned the meeting. In response, SAFE, supporting student organizations and other students are holding a sit-in in the CSG chambers indefinitely until our demands are met.

—Students Allied for Freedom and Equality

On February 24, following our distribution of “mock eviction” fliers in student dorms, university police officers arrived unannounced at the homes of Northeastern Students for Justice in Palestine members, and called our cellphones, to interrogate us about the leaflets. On March 7, the university suspended SJP without giving us a hearing. Palestine Solidarity Legal Support, whose attorneys are helping advise us, has documented more than 100 instances of suppression of pro-Palestine speech across the US in 2013. Following a year of administrative roadblocks and red tape, direct action—like leafleting about the Israeli practice of home-demolition—is all we have left at our disposal. Direct actions have increasingly become the recourse for students who wish to engage in political speech in support of Palestine. As universities curtail pro-Palestinian speech or thwart BDS initiatives, direct action from SJP chapters is set to increase.

On March 18, the Georgia Student Justice Alliance joined Moral Monday Georgia for “Truthful Tuesday,” a day of action that included a singing, speak-outs and civil disobedience. Alongside faith, labor and community organizations, we assembled at the capitol to urge Governor Deal to accept Medicaid expansion, which would extend health care to over 600,000 Georgians while also creating more than 60,000 jobs. In addition to mobilizing at the capitol, GSJA has been organizing for workers’ rights through the Choose Justice campaign by supporting Nissan workers’ demand for a fair union election.

On March 18, Newark students, parents, educators and community members took to the streets to protest state-appointed Superintendent Cami Anderson’s plans for the district. Anderson plans to lay off approximately 1,100 teachers in the next three years, implement her One Newark plan—despite enormous disapproval from the community—and further the privatization of the school system. While One Newark gives the façade of choice, it displaces students from their communities and prioritizes a charter school on the other side of New Jersey’s largest city over a public school across across the street. At the action, a group of more than 200 people were able to shut down the busiest intersection in the city, Broad and Market, for fifteen minutes. Afterward, the group moved to 2 Cedar Street, the Board of Education, to rally outside the board’s monthly business meeting. On March 27, the Newark Students Union will be marching with other organizations to Trenton, and on April 3, we are planning further direct action.

On March 12, the NAACP and and Black Student Union at the University of Iowa organized part one of the “I, Too, Am Iowa” photo campaign, following an NAACP program about what it will take for students of color to survive and thrive on campus. Inspired by the “I, Too” campaign at Harvard, we wanted to bring the discussion of race and marginalization to Iowa, where 17 percent of students are of color. On March 25, the groups will host part two of the campaign, in which more students of color can share microaggressions through pictures and be interviewed. By highlighting the daily experiences students of color are subjected to in a mostly white space, we hope to create awareness and catalyze systemic changes at the UI. In particular, we hope to prompt a cultural competency requirement through the university’s general education program.

On March 12, a collective of students called Whose Diversity? disrupted a ceremony intended to celebrate the recent “redesign” of the second floor in Coffman Memorial Union, a space that houses the student cultural centers at the University of Minnesota. During this reconstruction, historical murals that contained the histories of struggle and resistance on campus were demolished by administrative fiat. Alongside the disruption, students spoke out on the way students of color, working-class students, differently abled students, GLBTQ students and others have been historically marginalized at UMN. Minneapolis is over 18 percent black and 10 percent Latina/o, but UMN remains a bastion of whiteness—with only 4 percent black students and 2.4 percent Latina/o students.

9. Will Napolitano Get Away With Police Brutality?

As someone who separated and damaged two million immigrant families during her time as Secretary of Homeland Security, for many students, University of California President Janet Napolitano represents a system of terror and surveillance on black and brown bodies. When she visited campus on October 28, students at UC-Irvine staged a march around campus. When we tried to enter the building where she was meeting with a select group of students, we were met with pushing and harassment from undercover police. One student leader, Lisa Lei, has been charged with two misdemeanors for “battery” and “resistance,” and a graduate student leader, Jordan Brocious, with student conduct violations. Meanwhile, Lei has been hit with further misconduct over involvement in student-worker solidarity in the fall. In addition to organizing around the student conduct charges, in February, we held a solidarity action with mass protesters at UC-Berkeley, including a photo campaign in front of the UCI administrative building. Irvine students will continue coordinating with the statewide No 2 Napolitano campaign to escalate the pressure.

On Wednesday, March 19, more than one hundred undocumented youth and allies formed a light brigade outside the New York City Council offices to protest the failure of the NY DREAM Act on the Senate floor on Monday. The message of the light brigade spelled out “Klein: We trusted You. NY DREAM Act shine on”—targeting co-majority leader Jeffrey Klein and the Independent Democrats who put the bill to a floor vote knowing that the votes weren’t there, a ploy to kill the DREAM Act as the New York State Youth Leadership Council and allies were inching closer and closer to securing the thirty-two votes needed to pass the bill. The bill was two votes short of passing on Monday. NYSYLC and the NYS DREAM Coalition are urging Governor Andrew Cuomo to include the NY DREAM Act, which would open state financial aid to undocumented students, in his executive budget by April 1. If not, we are prepared to work to reintroduce the bill before the legislative session ends in June. Next week, we will meet with Rochester residents to make their support of the NY DREAM Act known to Senator Ted O’Brien.