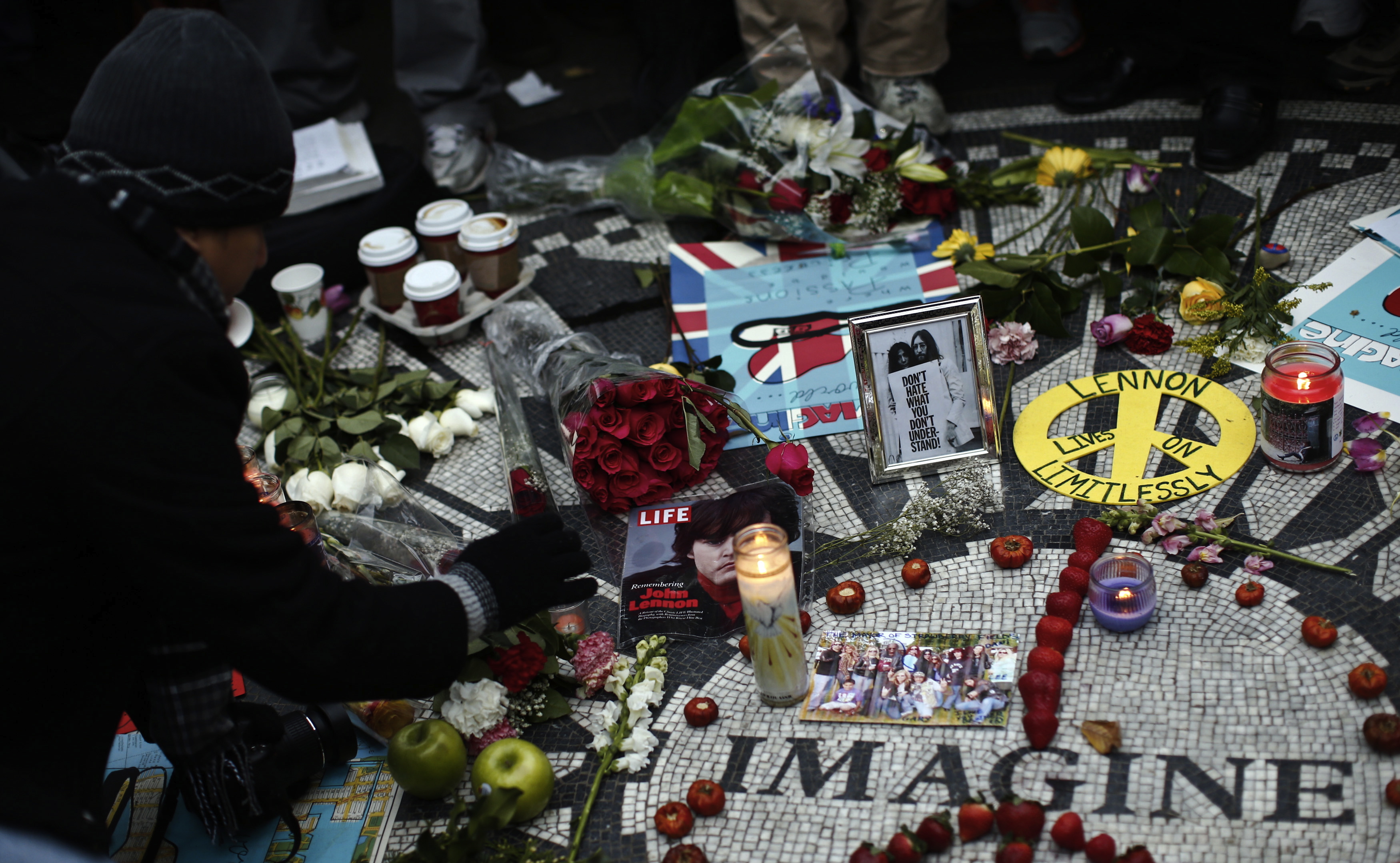 If we are told to remember the Beatles’ arrival in the United States fifty years ago last month as an “invasion,” it is as one that was unopposed. The 73 million people who watched Paul McCartney count the band into “All My Loving” on February 9, 1964 shattered all records, representing nearly two-fifths of the US population at the time, despite the fact that only 17 percent of American homes even had televisions in them. We surrendered without resistance, it often seems—a view evident in one Amazon review of a collection of the late Bill Eppridge’s photographs from the Beatles’ first week in the US. “Those six days did change the world,” the commenter writes, “by simply unifying us all with faces of sheer happiness.”

But at least one person wasn’t smiling. In an essay published in the March 3, 1964 issue of The Nation, “No Soul in Beatlesville,” a young Simon & Schuster editor named Alan Rinzler objected to the furor over the Liverpool lads’ music and—correctly, if somewhat myopically—attributed Beatlemania to a massive, premeditated PR campaign. The quivering throngs of teen-aged girls, he believed, said much more about the susceptibility of Americans to fashionable trends than it did about the talent or novelty of the group itself.

Rinzler began his essay by favorably comparing the Beatles with the folk music that then dominated American airwaves—“the citybilly's academically perfect imitation of a sound created from an experience different from his own.” Of performers like the string-band revival New Lost City Ramblers, Rinzler wrote: “Their musical tradition goes back no farther than some very careful listening to old Library of Congress tapes and Folkways recordings.”

The Beatles, he continued, were only marginally more authentic, more a throwback to the 1950s than a harbinger of any significant musical progress to come:

Another group which must have spent a great deal of time lately paying close attention to old records and making faces in the mirror are the Beatles, four young men from the mainstream of working-class Liverpool, with skin-tight, blue gray suits (velvet lapels), mops of long brown hair, and an electrical system guaranteed to numb the senses of even the most reluctant attendant. Their recent invasion of the United States was the PR man's finest hour (reportedly, thirteen publicity firms worked on the debut). For weeks the national press, radio and TV, and the slick magazines had instructed novitiates on what to expect and how to react. Beatle records blasted the air waves, promoted by disk jockeys eager to claim a "first discovery" (actually Beatle records were in this country ten months ago, but no one played them until the press agents got to work). Wigs, buttons, locks of hair, wallpaper, the hour of their arrival in New York, the exact location of their daily activities, all contributed to a triumphant exploitation of the affluent teen-ager. By the time the Beatles actually appeared on the stage at Carnegie Hall, there wasn't a person in the house who didn't know exactly what to do: flip, wig-out, flake, swan, fall, get zonked—or at least try.

The Beatles themselves were impressive in their detachment. They came to America "for the money." They attribute their success "to our press agent." They looked down at their screaming, undulating audience with what appeared to be considerable amusement, and no small understanding of what their slightest twitch or toss of head could produce. John Lennon, the leader of the group, seemed particularly contemptuous, mocking the audience several times during the evening, and openly ridiculing a young girl in the first row who tried to claw her way convulsively to the stage. Paul McCartney bobbed his head sweetly, his composure broken only when—horror of horrors—his guitar came unplugged. (There was a terrible moment of silence. One expected him to run down altogether, and dissolve into a pool of quivering static.) George Harrison tuned his guitar continually, and seemed preoccupied with someone or something at stage right. Ringo Starr, the drummer, seemed the only authentic wild man of the group, totally engrossed in his own private cacophony. For the rest, it was just another one-night stand.

Musically, the Beatles are an anachronism. They come pure and unadulterated from the early 1950s, the simple, halcyon days of rock 'n roll: Bill Haley and his Comets, Little Richard, Elvis Presley, the Eberle [sic] Brothers, the Ted Steele Bandstand. The Beatle sound is primitive rock 'n roll—straight four-four rhythm, undistinguishable melody, basic three-chord guitar progressions electrically amplified to a plaster-crumbling, glass-shattering pitch. It's loud, fast and furious, totally uninfluenced by some of the more sophisticated elements in American music that have brightened our pop scene in recent years. One can only assume that Ray Charles, gospel, rhythm and blues, country and western, and other purer folk sound has yet to cross the Atlantic. The English always have been a bit behind us—witness Oliver, a good old-fashioned American musical comedy, or Saturday Night and Sunday Morning and other realistic films in the 1930s' style. Often they do improve upon our models; the Beatles, with their American accents, their savagely delivered musical cliches, their tight pants, hair cuts and wild gyrations, are more entertaining and intelligent than anything we produced ten years ago.

But the Beatles remain derivative, a deliberate imitation of an American genre. They are surely not singing in a musical tradition which evolved spontaneously from their own lives or from a "natural" habit of expression. This is probably why the reaction at Carnegie Hall was not a real response to a real stimulus. There weren't too many soul people there that night either on the stage or in the audience. The full house was made up largely of upper-middle-class young ladies, stylishly dressed, carefully made up, brought into town by private cars or suburban buses for their night to howl, to let go, scream, bump, twist and clutch themselves ecstatically out there in the floodlights for everyone to see; and with the full blessings of all Authority: indulgent parents, profiteering businessmen, gleeful national media, even the police. Later they can all go home and grow up like their mommies, but this was their chance to attempt a very safe and very private kind of rapture.

Most did what was expected of them and went home disappointed. Disappointed because nothing really passed from the stage to the audience that night, nor from one member of the audience to another. There was mayhem and clapping of hands, but no sense of a shared experience, none of the exultation felt at a spontaneous gathering of good folk musicians, or, more important, at a civil rights rally where freedom songs are sung. The spectacle of all those anguished young girls at Carnegie Hall, trying to follow "I Want To Hold Your Hand," seems awfully vapid compared to the young men and women who sing "I Woke Up This Mornin' With My Mind" (. . . Stayed on Freedom). The Beatles themselves are lively and not without charm. Perhaps their greatest virtue is their sense of humor and self-caricature. But Beatlemania as a phenomenon is manna for dull minds.

In an e-mail, Rinzler—who just a few years later “discovered” Toni Morrison and edited her first novel, The Bluest Eye (1970)—writes that he has “spent the last fifty years apologizing for that snooty review.”

There's nothing in it about the Beatles that I agree with now, except my appreciation of their humor. The songs they performed that night at Carnegie Hall were all quite excellent but not only couldn't I actually hear them over the crowd of screaming weeping girls, but at 26, I was a soul-brother, rhythm and blues purist and didn't become a big fan until 1965 with the release of the superb album Rubber Soul, followed shortly by the equally terrific Revolver in 1966.

Meanwhile, my day job was at Simon and Schuster, where I was involved with the publication of Yoko Ono's avant-garde book Grapefruit and John Lennon's A Spaniard in the Works, though neither of them actually knew the other at that time.

Then, in 1968, my musical and publishing interests led me to become one of the pioneering staff members of Rolling Stone Magazine. I opened the first New York office then moved to San Francisco, where I was the Associate Publisher and Vice-President, as well as President of the books division Straight Arrow.

In that capacity I published several books on the Beatles and was a huge fan, a major promulgator of editorial work on their personal and professional lives. Later, when Lennon was assassinated, I was at Bantam Books, and was responsible for publishing the memorial book Strawberry Fields Forever.

Nevertheless that old Nation review comes back to bite me every once in a while. Even my own adult children can't believe I wrote it, but forgive me. Hope you will, too.