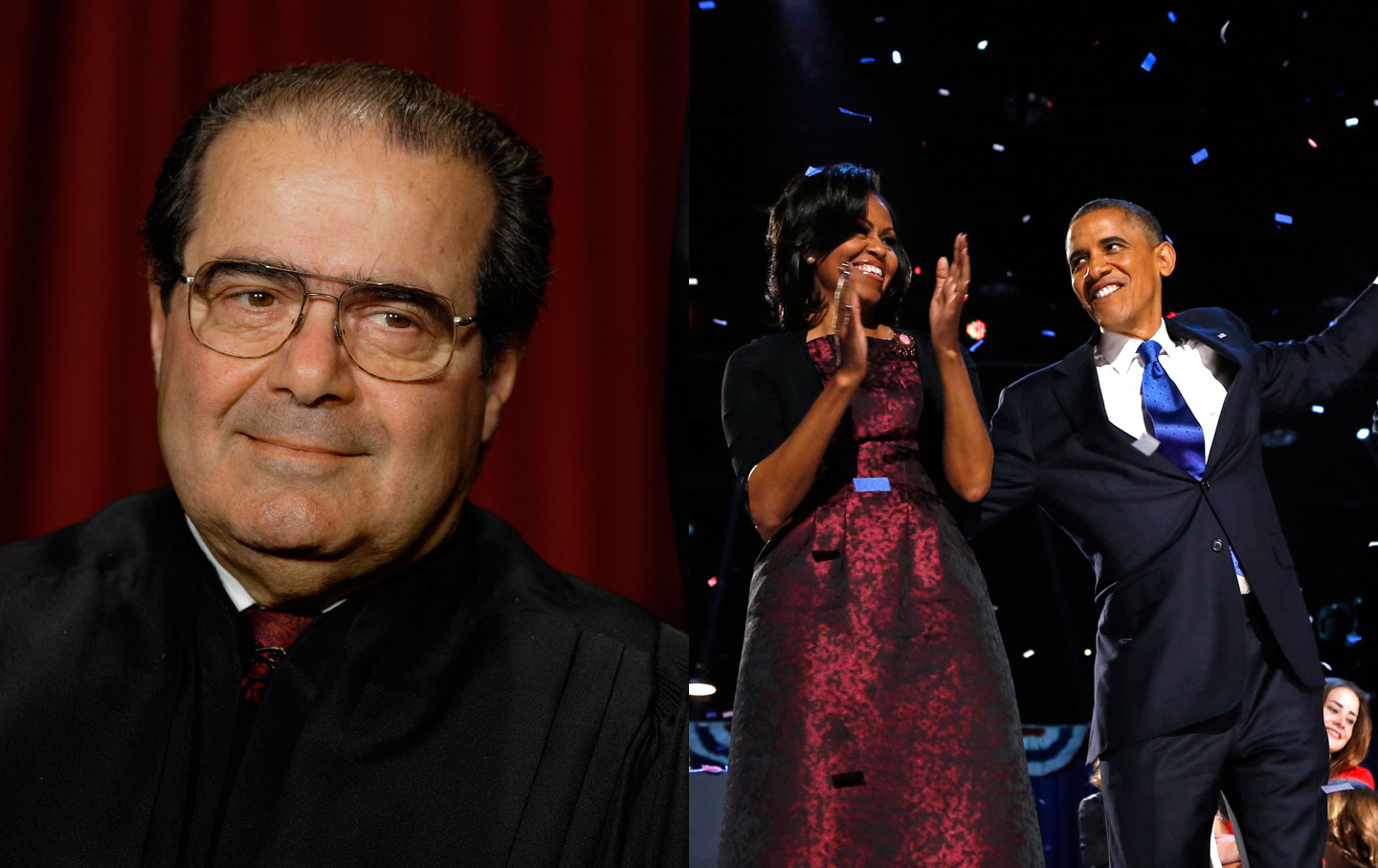 Once again, Justice Antonin Scalia is in the middle of a presidential election. Fifteen years ago, in December 2000, he was a part of the 5-4 Supreme Court majority in Bush v. Gore that halted the Florida recount and handed the election to Republican George W. Bush. The much-maligned decision is a regrettable example of the Court placing politics above the law, with five Republican-appointed justices ignoring constitutional principles to propel a new Republican president into office. In later years, Justice Scalia’s defense of the case boiled down to, “Get over it!”

On February 13, Scalia, ever brilliant, witty, and unrepentant, died at the age of 79. His death creates a vacancy on a closely divided Court that decides, often by a single vote, some of the nation’s most pressing issues. The vacancy comes as the Supreme Court is poised to decide a litany of blockbuster cases—abortion, affirmative action, labor, religious freedom, healthcare, voting rights, and the death penalty are all before the Court. It also thrusts the Supreme Court to the forefront of the 2016 election. The Court has always been the most important issue of this election—Scalia was not the oldest member of the Court, and three more justices will be in their 80s during the next president’s term. But with Scalia’s death, a once esoteric issue that has struggled for airtime became immediate and tangible. The impact was swift, with the Supreme Court the first subject raised during the Republican debate in South Carolina on the night of Scalia’s death.

Scalia is the first Supreme Court Justice to die mid-term since Robert Jackson in 1954, and losing him hurts the conservative special interests who have angled for big victories this year. Throughout a 30-year tenure that spanned five presidents, Scalia anchored the Court’s conservative wing, not just as a reliable vote, but as a legal movement’s intellectual leader who awed popular audiences with breezy, quotable opinions that persuaded through humor and biting criticism. Without Scalia, the current Court’s 5-4 conservative majority is gone, and many of the most contentious cases will result in either a 4-4 tie or a 5-3 decision with Justice Anthony Kennedy joining the more liberal justices, as he did last year on same-sex marriage.

In a tie, the Court simply affirms the lower court, and the result is as if the Court never heard the case at all. That’s a problem for the special interests that have engineered aggressive legal challenges designed specifically for the Supreme Court to decide. As we wrote in these pages in “The Case Against the Roberts Court” [October 12, 2015], that strategy has worked to great effect over the past decade. Time and again, the Court’s conservatives have advanced a pro-corporate, right-wing agenda by doing things that lower courts are unable or unwilling to do: Overturning well-established precedent, unilaterally changing questions before the Court, deciding issues about which there is no real dispute—all have become the keys to conservative success in the Supreme Court.

Several pending cases reflect that strategy. In Friedrichs v. California Teachers Association, the case designed to defund the labor movement, the plaintiffs intentionally lost in the lower courts so they could ask the Supreme Court to overturn its own unanimous precedent from 1977. In Evenwel v. Abbott, a challenge to equal voting rights under the Court’s “one person, one vote” doctrine, the lower court observed that the plaintiffs are “relying upon a theory never before accepted by the Supreme Court or any circuit court.” And to decide whether the Affordable Care Act’s birth-control mandate violates the rights of religious organizations, the Court consolidated seven appeals, not one of which blocked the mandate (the Eighth Circuit disagreed, but that decision isn’t before the Court). Across these issues—labor, voting rights, women’s health—the plaintiffs were counting on Justice Scalia and the Court’s conservatives. The lower courts were never the end game, and a potential 4-4 split was never the plan.

Justice Scalia was an adherent of originalism, the judicial philosophy focused on the original meaning of legal texts without regard to evolving social norms. A central tenet is that judges should not be concerned with outcomes; rather, they must faithfully apply legal texts according to their original understanding, and follow the text to whatever result it leads. At bottom, originalism requires fidelity to legal obligation over desired policy. Scalia loudly proselytized the theory, winning converts among conservative lawyers and politicians alike, even if, as in cases like Bush v. Gore, he contravened his own principles.

And yet in response to his death, Scalia’s fellow Republicans in the Senate quickly dismissed constitutional obligation—both the president’s to name a successor and their own to provide advice and consent—in favor of keeping the seat open beyond the election. Even without a nominee to oppose, the Senate’s Republican leadership, including majority leader Mitch McConnell and Judiciary Committee chairman Chuck Grassley, have said that President Obama, who has more than 300 days left in office, shouldn’t appoint Scalia’s replacement. Republican Senator and presidential candidate Ted Cruz has promised to filibuster any nominee. They’ve cited a lack of precedent for appointing justices in election years, but in fact six Supreme Court justices have been confirmed in presidential election years since 1900, including Republican-appointee Justice Kennedy in February 1988.

Senate inaction likely means the Court will be without one justice for two terms.

What’s more, Senate inaction likely means the Court will be without one justice for two terms. The next Supreme Court term will be nearly half over when the next president is sworn in, and even if that president nominates quickly, confirmation is unlikely before the term’s end. That means two years of potential 4-4 deadlocks that leave the Court unable to decide major constitutional issues. Thus refusing to even vote on a nominee is not just an abdication of constitutional duty; it will manufacture a constitutional crisis.

Unfortunately, a strategy of obstruction without regard to consequence is not new. There are also 34 judicial nominees to other federal courts pending, including four to circuit courts of appeals. Yet no votes are scheduled, and this Senate is on pace to confirm the fewest judges in a two-year congress since1951-52. Even in the minority, Republicans worked to block President Obama’s judicial nominees, including in 2013, when they filibustered three nominees to the DC Circuit Court of Appeals. But a stalled Supreme Court nominee would amplify scrutiny of this obstruction, and that could pressure a Republican caucus that has 24 seats up for election in November (Democrats have just 10). Some of the Republican incumbents facing contested elections, like Ron Johnson in Wisconsin and Pat Toomey in Pennsylvania, are already under fire for blocking or delaying circuit court nominees in their home states.

Without question the Supreme Court should be at the center of this election, and a new vacancy puts it there. Americans deserve to know what kind of justices a candidate would appoint, and the 2016 elections will have an enormous impact on the Court’s future. But what this election will not decide is who gets to replace Justice Scalia. That happened in 2012, when the American people elected President Obama to another four-year term that still has 11 months remaining. Once the president nominates, the Senate must take seriously its constitutional obligation to give that nominee a fair hearing and a timely vote. They owe it to Justice Scalia and his philosophy of obligation over outcome. And as stewards of our democratic institutions, they owe it to the American people.

For our part, progressives must unite around a nominee, and fight not just for a confirmation this year, but for the future of the Supreme Court. This is a rare moment to galvanize all our communities around an issue that profoundly affects every constituency, and to commit to a new vision of the Court that provides equal justice to all Americans, not just powerful special interests.