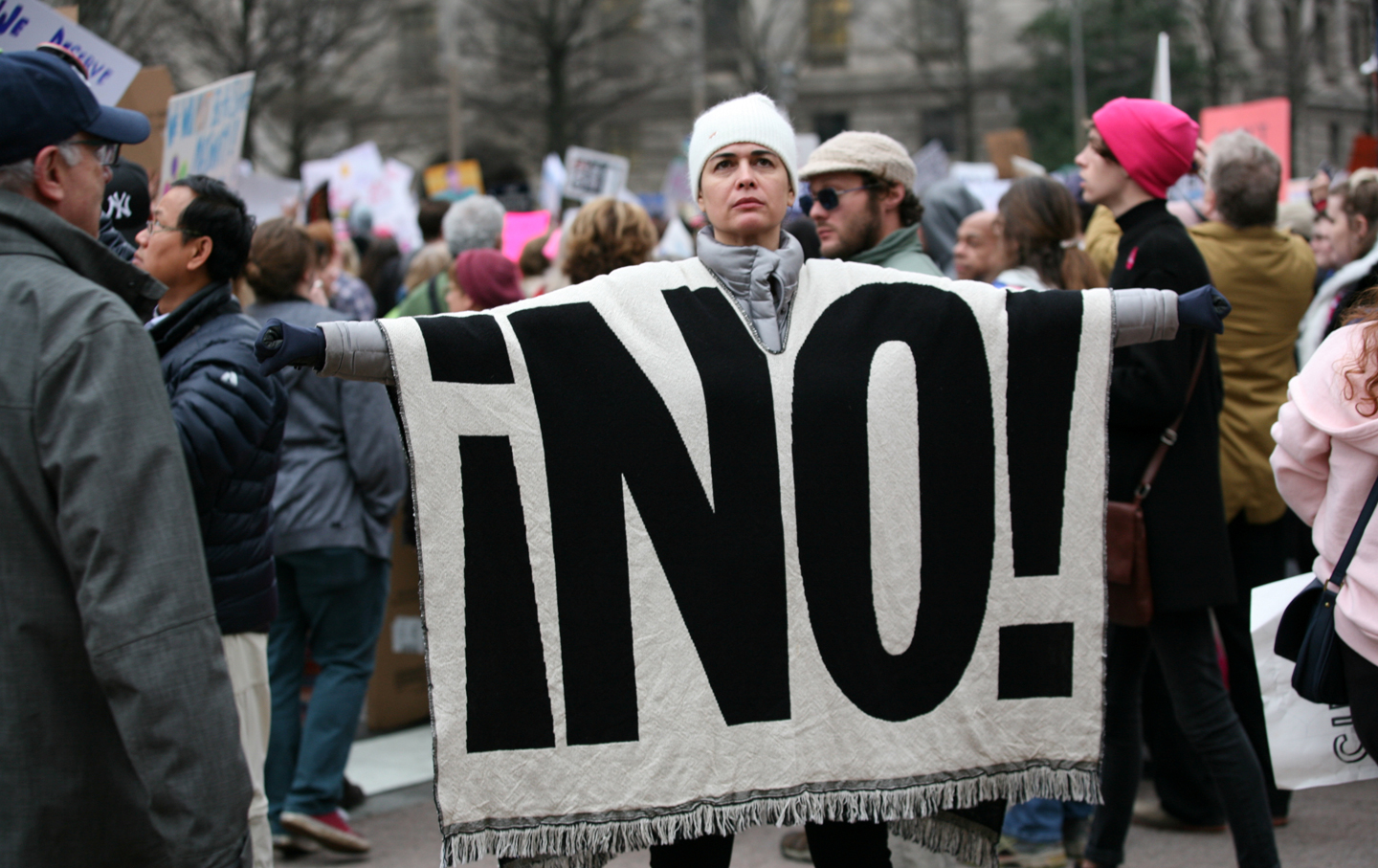 A woman displays a blanket at the Women's March on Washington, January 21, 2017. (Reuters / Canice Leung)

The shopping concourse at Washington’s Union Station looks like a scene from Blade Runner: hordes of travelers, the garish lights of fast-food outlets, and men in camouflage with dogs guarding closed-off exits. It’s our first glimpse of a city in semi-lockdown, the center of government walled behind high metal fences, checkpoints, and barricades. Women in evening gowns and men in black bow ties pick their way through the crowd, stony-faced and faintly disgusted.4

On the Metro we sit across from a very different couple. Their Trump baseball caps—his camouflage, hers red, worn backwards—still have price tags dangling. So do their wheelie suitcases. He’s in jeans and a worn leather belt; she wears a beige cable sweater stretched over her belly and a left boot split at the front so her bare toes are visible. They look like country people, weathered and calm. On the partition next to them a sticker shouts, “NO! Stop Trump/Pence. No fascist USA.” 5

Without speaking, Zoe and I both start jotting down notes: a moment of mother-daughter synergy, and a mark of our distance from the couple opposite. At a country barbecue we’d chink beer bottles, listen to them, swap stories. But here it feels impossible. The city is occupied by different worlds that slip past, mistrust, confront each other. The one thing they can’t have is a conversation. This is as true of the two wings of Trump’s supporters—the glitzy rich in their finery and the white working class who’ve come to “take back” their capital—as it is of “us” and “them.”6

The streets are eerily empty; helicopters whir overhead. On Dupont Circle the statues round the fountain sport red sashes that read “Resist.” We pass a souvenir shop selling Obama T-shirts beside the scarlet Trump ones, a bookshop with Carol Anderson’s White Rage prominent in the window. Further in, armored cars wait in the side streets. 10

We hit the black perimeter fence a little before noon. It’s raining a bit (despite what Trump said) and the sound of a distant choir swims through heavy air. Small knots of people pass each other in silence, some in red Trump caps, some carrying signs: “Not my president,” “Don’t touch my pussy or the White House kitchen garden.” At noon, as the faraway cheer goes up, a middle-aged man across the street bows his head over his placard: “Thank you President Obama. Yes We Can.” Apart from a few people selling Trump souvenirs, there’s barely a black or brown face to be seen. Zoe points out, “It’s because people don’t feel safe.”11

But then we find the #DisruptJ20 protest, dedicated to shutting down the inauguration: “If Trump is to be inaugurated at all, let it happen behind closed doors, showing the true face of the security state Trump will preside over.” They’re the ones who clashed with police outside the Alt-Right DeploraBall; who got up early to blockade the entrances to the militarized perimeter in the name of Black Lives, Climate Justice, Feminism, Queer Resistance, Labor; who took to the streets and stayed there. We fall into their march behind two giant photos of raised fists: “Ungovernable Anti-Fascist.” We shout. We may not be achieving much, but the sense of threat and oppression temporarily lifts. And that’s important too.12

We spend the afternoon making signs for the Women’s March with friends of the cousin who has kindly put us up—middle-class people who happen to be related to an undocumented immigrant, who feel their own civil liberties are now under threat. “Migration is a human right,” one woman writes. “No human is illegal.” My sign harks back to the last time I marched in Washington, before I moved to London, on a pro-choice protest at the close of the Reagan years: “Been There, Done That, No Going Back.” A man in his 60s tells me with grief in his eyes about the time his college girlfriend got pregnant. They crossed the border to Mexico for an abortion, and he had to wait for her alone in the hotel room, not knowing whether she was going to be OK.13

Back downtown as it gets dark, I have a different flashback: Athens 2011, 2012, 2013… There are the riot cops impassive in their black armor, making a barrier round the area where a limo was set on fire; there are the protesters milling about, half waiting for a confrontation; there’s the circle of photojournalists crowded round a burned-out trashcan so they can sell “the violence.” And there’s that heady mixture of anger and joy in the air, the feeling of being lifted by the crowd, of breaking with the “normal.” One sign says, “Fuck this Shit.” Another, which needs three people to hold it up, reads “FASCIST.” On the stage in the park behind us a man is apologizing for “the slight tear in the space-time continuum.” It’s the tear that’s always been there, but now it’s wide enough to be seen by well-off white liberals, people who always felt safe. I watch my fierce daughter take the microphone and lead the chants for while: “Show me what a feminist looks like! This is what a feminist looks like! Show me what democracy looks like…” 14

I leave her there with motherly advice about how to stay safe, and go to eat dinner with some of my own old feminist posse. Later, a message comes through on my phone: “Don’t want you to be concerned, I got lightly pepper sprayed earlier, but I’m totally fine, my arm and face just a bit red…” I’m both proud of her fearlessness and worried I might have encouraged her to put herself in danger—not that she needed my encouragement or asked for my permission. We talk that evening about forms of protest, civil disobedience, disruption, violence, what to do when the forces against you are so powerful, unscrupulous, malign. “One of my problems with the Women’s March,” she says, “is that it’s so nice.”

Washington is awash with women, on the buses, in the streets, shouting, laughing, cheering. We’ve overwhelmed the Metro, packed the pavements, filled the air with sound. “Nice” turns out to have its own edge and power. Shades of pink are everywhere; the pussy hats derided by some solemn Facebook sisters are a brilliant stroke of homespun theater. The signs are fabulous too: fallopian tubes giving the finger, polychrome vaginas, Trump groping Lady Liberty, “We Shall Overcomb,” “Why is the Impeachment Taking so Long?” “My Dad was a Refugee.” There’s little Hillary nostalgia, a fair sprinkling of anti-Putin slogans (“Tinkle tinkle little Czar, Putin put you where you are”). This is good-natured, hopeful, public-spirited, humane America (“Make America kind again”); an America that still believes in the liberal values of its founding documents (“This President is Illegitimate,” “We the People”). It’s a protest against everything Trump stands for, with women’s rights front and center—because we are the group he has most blatantly insulted, because we’ve fought hard for what we’ve gained and refuse to lose it, because we are the backbone of communities, because women rise.19

Where we’re standing, many blocks and several screens away from the main stage, the crowd includes all ages, though it’s pretty white—much whiter, in fact, than the speakers. We crane our necks and prick up our ears to hear them—Michael Moore exhorting everyone to keep calling their representatives, Ashley Judd performing 19-year-old Nina Donovan’s stunning poem “Nasty Woman,” and eventually Angela Davis, sharper and more radical than most of the slogans here: “This is a country anchored in slavery and colonialism, which means for better or for worse the very history of the United States is a history of immigration and enslavement…”20

By the time Davis speaks, more than two hours in, we’re all restless and restive. We grumble about the organizers—who ever heard of having the rally first and keeping us there for three hours. But once we get moving (past two cops who give us a quick thumbs up) the energy returns: we’ve overflowed, exceeded everyone’s expectations, we are the many, we see each other all around the world, and we’re not going away. And yes, there were too many speakers and we couldn’t hear most of them, but I also understand why their presence mattered, from Ai-Jen Poo of the National Domestic Workers’ Alliance, to Palestinian-American Linda Sarsour, to Immigrant Rights activist Sophie Cruz, to Iyasah Shabazz, daughter of Malcolm X, to Sabrina Fulton, mother of Trayvon Martin. That clumsy word “intersectionality” barely begins to describe the listening that has to happen and common ground that has to be built.21

We leave our placards against the fences crisscrossing the Ellipse. The White House in the distance looks like a Doonesbury drawing. Inside, framed by his new gold curtains, the Orange One has already started signing away our lives. The values enshrined in the Bill of Rights, the checks and balances built into the Constitution can be powerful tools—certainly more powerful than any we have in Britain—but for millions of people they’ve offered little protection against racism, poverty, misogyny, violence; now they will be openly as well as tacitly ignored. I’m glad I marched with my daughter in our pink pussy hats, but I’m also glad we marched with #DisruptJ20. As we head home, we talk about the need for both kinds of movements, for radical suffragettes and mainstream suffragists, for direct activists and inclusive reformers, how they can either undermine or support each other.22

And still I’m haunted by that couple on the Metro in their Trump hats and old clothes, wondering what will happen to them, how to hear them, what it will take to make them change their minds.23