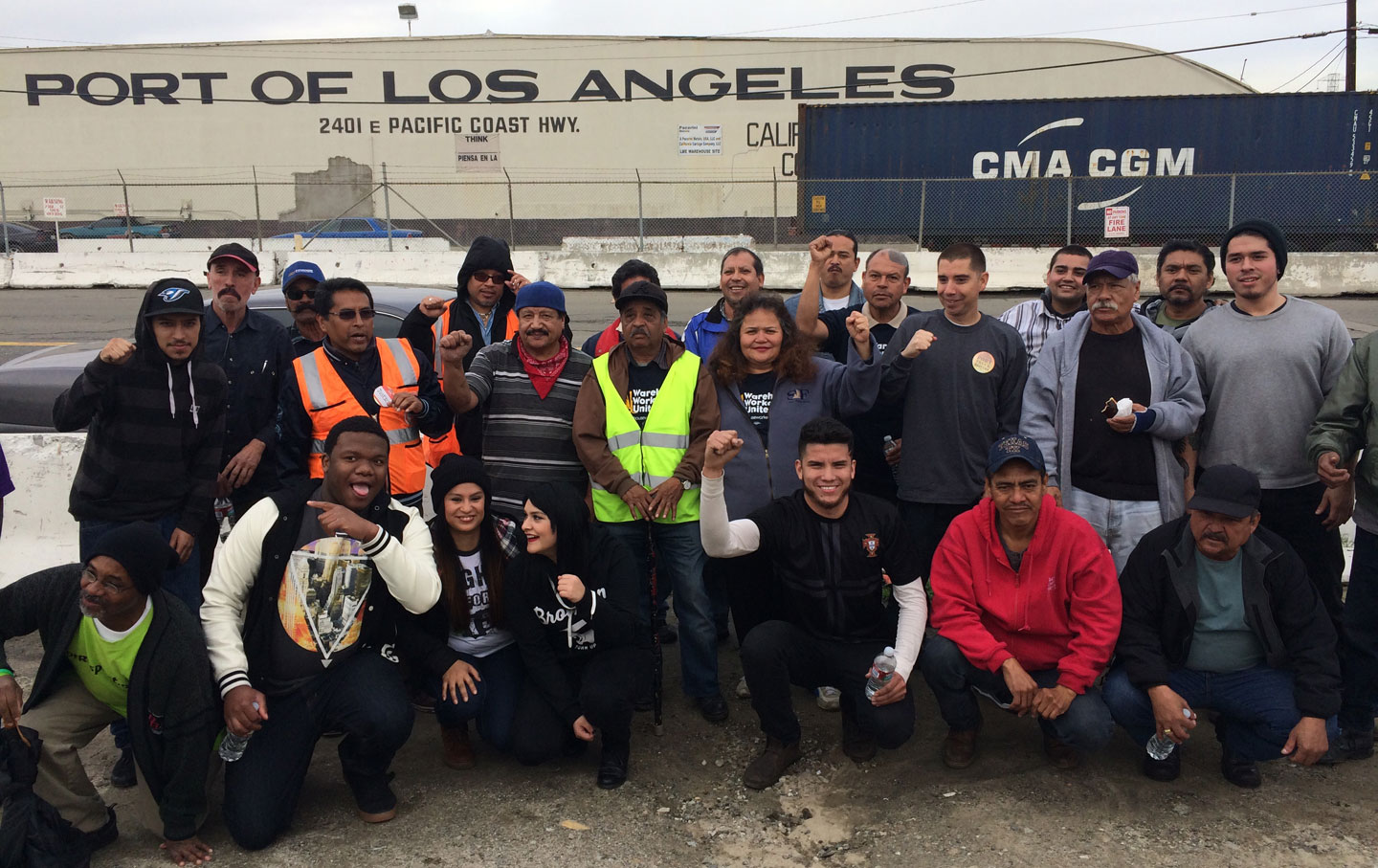 The Port of Los Angeles has been a crossroads of global trade for decades—and a labor battleground for just about as long. Following in the wake of the historic longshore union wars and the more recent port-trucker strikes, warehouse workers are rumbling the docks.

A few dozen workers at the California Cartage warehouse went on strike on Tuesday to protest poverty wages and harsh working conditions. Though backed by the advocacy group Warehouse Workers Resource Center (WWRC), with support from the Teamsters, the strikers don’t have a union—many aren’t even permanent employees. But they’ve seized on a unique moment in the labor movement to push for a broad recognition of the equal rights of contingent workers and to hold all companies operating at the site accountable. The workers are demanding a $15 minimum wage (an immediate raise well ahead of Los Angeles County’s new target minimum wage to be phased in by 2020) and respect for the labor rights of all workers at the site.

Workers are simultaneously pressing a lawsuit filed last December against Cal Cartage and various staffing companies, charging that some 500 workers were systematically underpaid by as much as $2 to $3 per hour since at least 1999. They argue that Cal Cartage is bound by local Living Wage standards because it operates on land leased from the city. Workers also charge that they were shorted on overtime hours and forced into erratic schedules, which sometimes led to being sent home immediately because of lack of work after reporting to the site.

The workers recently expanded their legal fight with a complaint at the National Labor Relations Board, claiming the management used abusive tactics to retaliating against workplace organizing, such as “attempting to provoke a physical altercation with workers after they asked to take a break while working during excessive heat this August,” and “implicitly threaten[ing] discharge” in response to workers’ organizing activities.

Crucially, both complaints named California Cartage and staffing agencies as joint employers, based on the rationale that while Cal Cartage had not hired the agency workers directly, they were nonetheless responsible for their conditions at work, including employment decisions, disciplinary practices, compensation, and scheduling.

The claim parallels a landmark NLRB decision in August that dramatically broadened the scope of the joint-employer designation. That case, involving the Browning-Ferris Industries staffing agency at a California recycling plant, reversed a longstanding precedent enabling lead companies to shift employer responsibilities onto third-party subcontractors. The decision opened the door to unionizing both contract workers and direct hires under one collective-argaining unit.

The port workers are not actively campaigning for a union. But they voted for a joint strike action to pressure their employers, forming a united front between contract and regular workers and jointly asserting shared legal rights.

Anthony Vallicello, 28, an agency mechanic who has worked at the warehouse on and off for five years, says he has suffered physically because of rough and unsafe workplace conditions. The temps, many of them immigrants, “work under conditions where they’re in the cold, or in the rain, and it’s too hot for workers to be working in those working conditions…. There’s lot of accidents that happen,” he says. “When it rains, they have them working harder [while] not thinking of the safety.” And though “they put more pressure on the agency workers,” conditions are degraded for all warehouse employees, he adds. (Workers recently accused Cal Cartage of various safety violations, including inadequate training and lack of vehicle safeguards, in a separate pending complaint with California’s Occupational Safety and Health Administration).

Cal Cartage has declined to comment to The Nation, but stated that it has been monitoring the strike situation.

Vallicello has, too; but after trying to complain to supervisors about unpaid overtime hours, he’s realized that neither company wanted to address the issue. Instead, he explains, “What they do is, they put it onto each other. ‘Oh, go talk to the agency.’ And the agency says, ‘Go talk to Cal Cartage.’ So they’re trying to keep on tossing to each other their responsibility.” While bosses play ping-pong with workers’ grievances, Vallicello says, “Just because they got a third person to hire doesn’t mean they’re not responsible.”

Formally deeming Cal Cartage and staffing agencies as joint employers could weaken a key weapon corporations use to shirk liability and cut labor costs: subcontracting, outsourcing, and stacking their staffs with temps to keep workers divided among themselves and distanced from the real source of managerial power.

The outsourcing of warehouse labor is actually a microcosm of the “just in time” global logistics infrastructure.

Another labor-relations case brought by McDonald’s workers under a similar joint-employer claim could boost fast-food-worker organizing efforts by dismantling a major barrier to organizing—the franchise business model under which workers are technically hired by franchisees. If the Golden Arches were deemed an official joint employer, franchise workers could potentially unite as a single labor force. According to the National Employment Law Project, the ruling “means that corporations that share control over operations cannot feign ignorance or disclaim responsibility for illegal acts [that] flow from the business model the lead company imposes.” So instead of dodging regulations to “save” on labor costs, they’ll be held to regulatory obligations as employers, including sitting down with unions in contract negotiations.

The outsourcing of warehouse labor is actually just a microcosm of the “just in time” logistics infrastructure, in which retail giants like Amazon and Lowe’s (two brands linked to the warehouse) draw on a global supply chain brimming with poorly regulated contractors and subcontractors, from California warehouses to South Asian sweatshops.

According to Vallecillo, other coworkers would have joined their picket line, but feared potential repercussions. “Before, nobody knew about this,” he says. “A lot of workers didn’t want to speak up; they were intimidated.” He and his fellow strikers only learned about their rights on the job after getting involved with the WWRC; the idea for a strike emerged gradually from “a combination of everybody just being together and being a little more educated.”

And by joining together to jam up the port’s logistical gears, they hope to teach their bosses—all of them—that the laborers who have historically been treated as disposable are in fact indispensable.