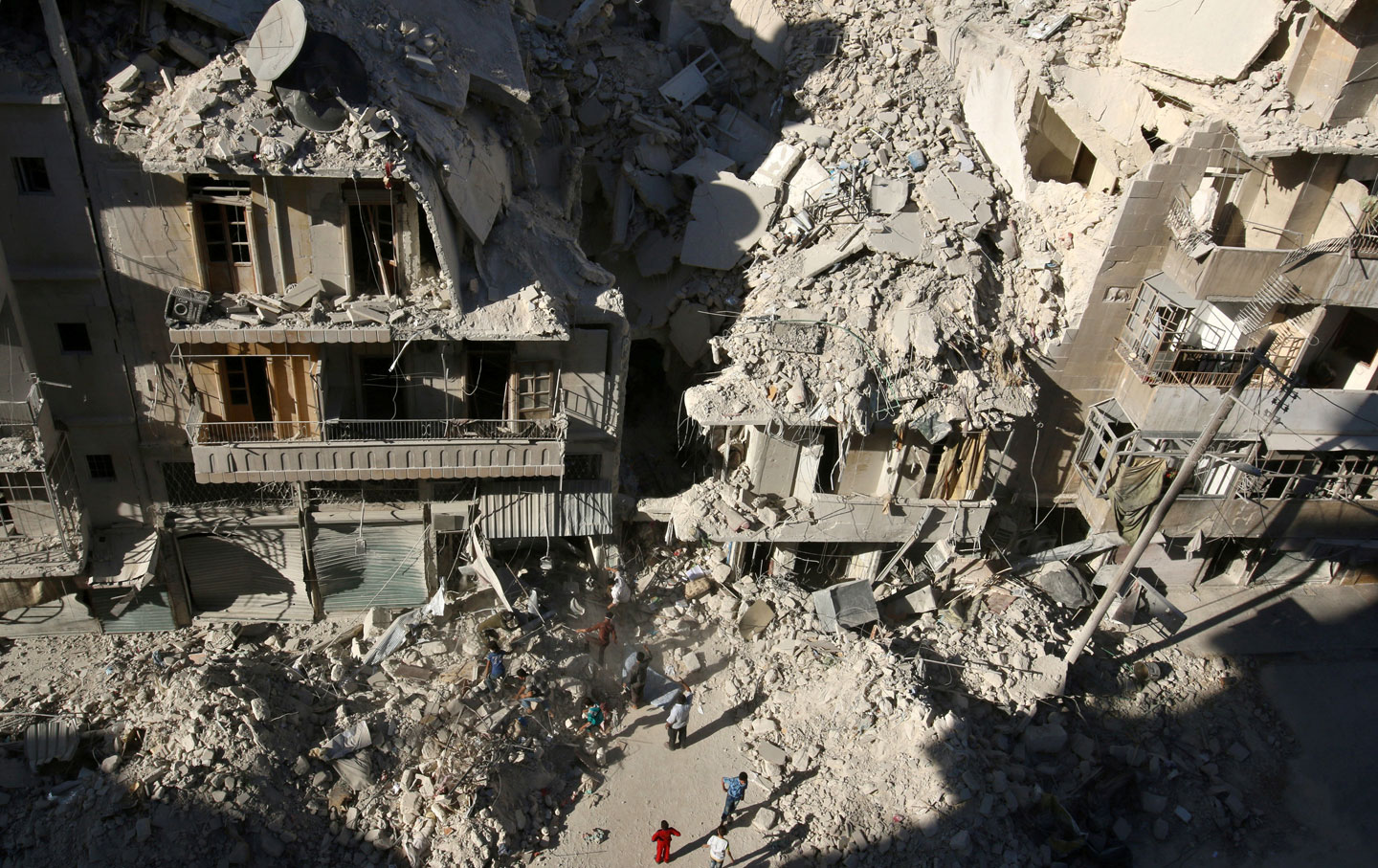 People dig in the rubble at a site hit previously by an airstrike in the rebel-held Tariq al-Bab neighborhood of Aleppo, Syria, September 26, 2016. (Reuters/Abdalrhman Ismail)

In the 48 hours since the administration cut off bilateral talks with the Russians over the war in Syria, the tide has turned toward American military intervention in Syria. This was perhaps predictable given Secretary of State John Kerry’s remarks in Brussels on Tuesday in which he expressed his “great sense of outrage” that “the Syrian regime and Russia seem to have rejected diplomacy in furtherance of trying to pursue a military victory over the broken bodies, the bombed-out hospitals, the traumatized children of a long-suffering land.”

The administration’s diplomatic efforts were undermined almost from the very start, when US airstrikes killed over 60 Syrian government troops only days after the announcement of the September 9 cease-fire agreement. As Nation contributing editor Stephen F. Cohen recently observed, the Pentagon’s “opposition was so intense that one of its spokesmen told the press it might disobey a presidential order to share intelligence with Moscow, as called for by the agreement, in flagrant violation of the US constitution.” On Tuesday Pentagon spokesman Peter Cook issued a warning to Russia over its deployment of anti-aircraft missiles to Syria.

Meanwhile, Arizona Senator John McCain seemed positively cheered by the news that our so-called Gulf state “allies” are seeking to provide the Islamist rebels in Syria with man-portable air-defense systems (MANPADS). McCain told The Hill last Wednesday, “It’s about time…because the [Obama administration] is not going to do it.”

And while Congress is on recess until after the election, pressure on the administration to allow the dispersement of MANPADS to rebel fighters continues apace. Alarmingly, as one congressional source familiar with the fight over MANPADS told me, “the House has repeatedly voted unanimously to block MANPADS from being sent to Syria. But when the defense-spending bill goes to conference, someone anonymously removes the provision, overturning the will of the House without explanation.”

Indeed, according to the Congressional Research Service (CRS), the House has, since 2013, repeatedly passed legislation that prohibits the “procurement or transfer” MANPADS to Syria.

According to the CRS, the FY2015 defense appropriations act stated that none of the funds earmarked for the Syria Train and Equip program “shall be used for the procurement or transfer of man-portable air-defense systems.”

The following year’s defense-appropriations bill, for FY2016, also prohibited funds from the Syria Train and Equip program from being “used for the procurement or transfer of man-portable air-defense systems.” And yet, as enacted, “the final version of the FY2016 defense appropriations act does not include such a prohibition.”

While the House has repeatedly tried to block federal money from being spent on the “procurement or transfer” of MANPADS in the FY2017 budget, in the end those prohibitions were stripped out. As the CRS points out, “the Senate-passed versions of the FY2017 defense authorization and the FY2017 defense appropriation do not contain” provisions that would prohibit the US from providing jihadi rebels in Syria with MANPADS.

Still worse, in July, New York Congressman Eliot Engel introduced the Caesar Syria Civilian Protection Act of 2016 to halt to the “wholesale slaughter of the Syrian people, encourage a negotiated political settlement, and hold Syrian human rights abusers accountable for their crimes.” Good intentions aside, the bill would, in reality, help lay the groundwork for a no-fly zone in Syria. Engel’s bill, which now has 70 co-sponsors from both parties, requires the administration to assess the “potential effectiveness of and requirements for the establishment of safe zones or a no-fly zone in Syria.”

The Interventionists Sense An Opening

It is an open question whether any or all of the aforementioned would be enough to satisfy the neoconservative and liberal interventionists who have been calling for greater US intervention in Syria for nearly 5 years.

The war party’s sense of frustration with the administration’s heretofore mostly cautious approach to the Syrian conflict remains palpable. The neoconservative Foreign Policy Initiative argued on Wednesday that, while the tragedy in Syria “is overwhelming, it was entirely predictable. This is because President Obama has repeatedly refused to take action to defend the Syrian people from Assad’s brutality.”

With the breakdown in bilateral talks between the US and Russia, the war hawks sense an opportunity—and they have wasted no time in spinning a narrative which paints increased US intervention in benign—to say nothing of deeply dishonest, terms.

The pro-interventionist, pro-war arguments rely on euphemism to advance their arguments to an usual extent, habitually (and no doubt willfully) ignoring recent history, deriding what they see as “hypothetical” risks in favor of “doing something.”

Entirely suppressible? Well, no, not really. As a 20 year Army officer current deployed in the Middle East told me: “both of those systems are mobile which makes suppression much more complicated even considering our ELINT [electronic intelligence] capabilities.” He continued, “at what cost is it acceptable to ‘suppress’ Russian systems? Is a direct attack to destroy a Russian military site acceptable because that is what we do when we suppress anti aircraft sites?”

The establishment is now ready to throw caution to the wind. On Tuesday, former National Security Advisor Zbigniew Brzezinski wrote: “To halt the relentless attacks on the innocent in Aleppo, available US power should assert its capabilities.” The Washington Post’s Josh Rogin dismissed the risks of American military intervention as merely “hypothetical.” The New York Times columnist Tom Friedman wrote on Wednesday that he would like the CIA to give Vladimir Putin a “dose of his own medicine.” In Friedman’s considered opinion, “we have underestimated the pressure needed to produce effective engagement, and we’re going to have to step it up.”

What exactly does “step it up” mean in this context? Friedman of course won’t say, but does he mean he would like to see the US to get into a war with Russia, Syria and very possibly Iran on the side of Salafist extremists in order to overthrow the sovereign government of a state nearly 6,000 miles from our shores?

Even the normally sensible David Ignatius has jumped aboard the war party bandwagon. While acknowledging the costs and danger of establishing a no fly zone over Syria, Ignatius painted a fairly misleading portrait of the overall situation in Aleppo on Tuesday. No mention was made of the Nusra Front’s stranglehold on east Aleppo or of its attacks on the western half of the city, which have continued throughout the Russian-Syrian bombardment.

Ignatius reports that “Russian weapons now include thermobaric bombs, incendiary munitions, cluster bombs and bunker busters.” “They are,” he writes, “attempting to burn Aleppo alive,” as if there is no strategy behind exactly where the Russians are hitting the jihadists (in east Aleppo). Nor was there any consideration that civilian population that is trapped there just might want to be freed from their Islamist captors. Ignatius proposes that the United States “air-drop supplies to a besieged, desperate city.” Does he somehow think those supplies won’t end up in the hands of the foreign-funded extremists there?

Those with the temerity to object to further American involvement in the Syrian civil war are met with smears, such as those made by the Century Foundation’s Thanassis Cambanis, who jeered that opponents of American-led regime change in Syria were merely “fascism apologists” whose “anti-imperialism blinds them to all else.”

Yet the horrific tragedy now unfolding in Syria is partially the result of the West’s tacit and overt support for the overthrow Syria’s secular government by radical Sunni fundamentalists. That has been, in effect, US policy in Syria, and it runs directly counter to US national-security interests.

While it is certainly the case that innocent people are dying because of the indiscriminate Russian and Syrian bombardment of east Aleppo, revived diplomacy in pursuit of a renewed cease-fire should not give way to the imperatives of self-righteous indignation at the risk of a wider war.