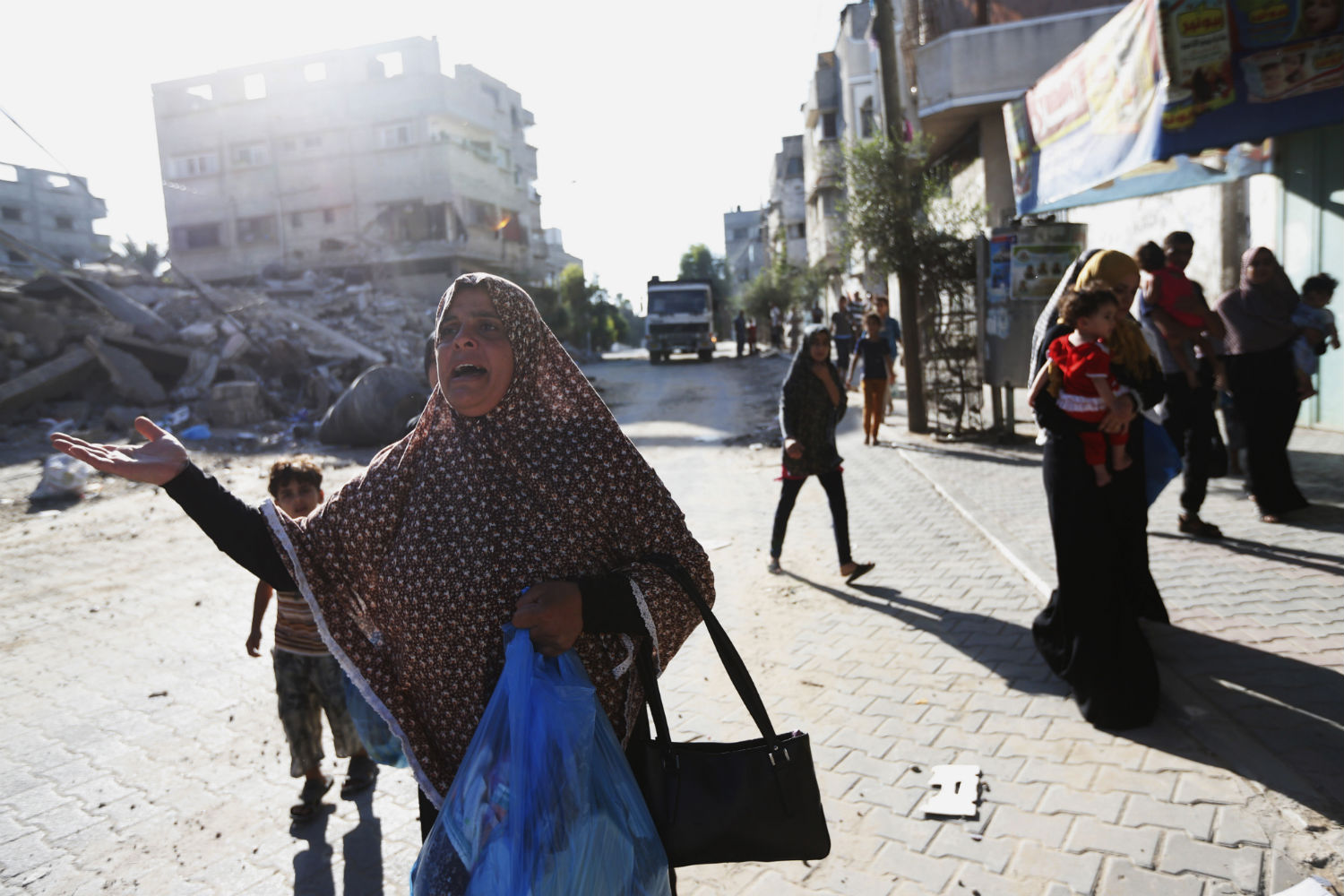 As we go to press, Israel’s third assault on Gaza in five years continues into its second week, with no end in sight. So far the Israeli military has killed nearly 200 Palestinians—some 80 percent of them civilians, according to the United Nations—and wounded more than 1,300. Israeli officials boast of their precision targeting, but the high civilian casualty rate, stemming from deliberate attacks on homes as well as a hospital, school, cafe, a rehab center for the disabled, mosques and other nonmilitary infrastructure, calls to mind the conclusion of Haaretz columnist Gideon Levy, who wrote, “The goal of Operation Protective Edge is to restore the calm; the means: killing civilians. The slogan of the Mafia has become official Israeli policy.”

Of course, Hamas’s strategy of firing poorly aimed rockets—some 1,000 of them to date—at Israeli cities is just as atrocious as the far more deadly Israeli barrages; both are in fact violations of international law amounting to war crimes. But the wildly disproportionate casualty rate—one Israeli has been killed so far, and a few injured—exposes the true nature of this “war,” in which one of the world’s most powerful militaries uses F-16s, helicopter gunships, drones and heavy artillery against a nearly defenseless, imprisoned population with nowhere to run and nowhere to hide.

Reflexive US support for Israel by politicians from both parties is of long vintage and no surprise to anyone. Even so, it was shocking and shameful to hear White House and US diplomats repeatedly voice support for Israel’s “right to defend itself” as it rained bombs and missiles down on the people of Gaza. Much of the US media repeated tired clichés about the “cycle of violence,” as if the conflict began when three Israeli teens were kidnapped and murdered. But lost in the media frenzy was the deeper context to this latest round of bloodshed. The collapse of the ill-starred peace process in the spring had created a dangerous vacuum. Secretary of State John Kerry mostly attributed the failure to Israel’s relentless settlement project. Israel, for its part, blamed the accord between Hamas and the Palestinian Authority, which it was determined to destroy.

The government saw its opportunity in the kidnapping of the three teens: although Israeli police were almost certain within days that the teens had been murdered—and almost certainly by freelance thugs rather than Hamas operatives—the Shin Bet placed a gag order on the media so that it could round up hundreds of Hamas members. At the same time, the government ginned up a #BringBackOurBoys campaign—a cruel deception of the anguished parents, but also part of a strategy to foment public hysteria against Palestinians in general and Hamas in particular. It worked—perhaps better than intended, as an ominous, pogromlike atmosphere fell across the country when the teens’ bodies were found, with Netanyahu himself tweeting a cry of “vengeance for the blood of a small child.” The mob attacks culminated in the lynching of a Palestinian teen.

Achieving a cease-fire will be difficult, given the regional upheavals—all the more reason for European and regional governments to step up their efforts. But unless the deeper issues are addressed, the cycle will continue—the cycle not of violence, but of impunity. Impunity is what happens when an aggressor fractures the norms of international law and basic human rights yet is never held to account, and so is free to commit the same crimes again and again. That is what we’re seeing now, and that is exactly what the Goldstone Report—the findings of the UN investigation of Operation Cast Lead in 2008–09—so presciently warned against. It said then that bringing to justice those who committed war crimes—Israel as well as Hamas—was perhaps the only effective way to prevent another round of violence.

It was the United States that prevented Goldstone’s recommendations from getting a fair hearing in the UN—and it’s the United States, the world’s sole superpower, the key bankroller of Israel’s military, and the unconditional defender of Israel in international forums, that bears deep responsibility for the continuation of the decades-long occupation. Congress and the White House may seem to be an impregnable fortress to those struggling for justice on this issue. But never underestimate the power of sustained grassroots action. The campaign to bring justice to Israel is small but steadily growing, and the media and politicians know it. The fact is, with groups like J Street and Jewish Voice for Peace on the scene, it’s no longer political suicide to stand up to AIPAC and its kin. It’s our job, as citizens of America and citizens of the world, to force the politicians to do the right thing and compel Israel to end its occupation and, at long last, free Palestine.