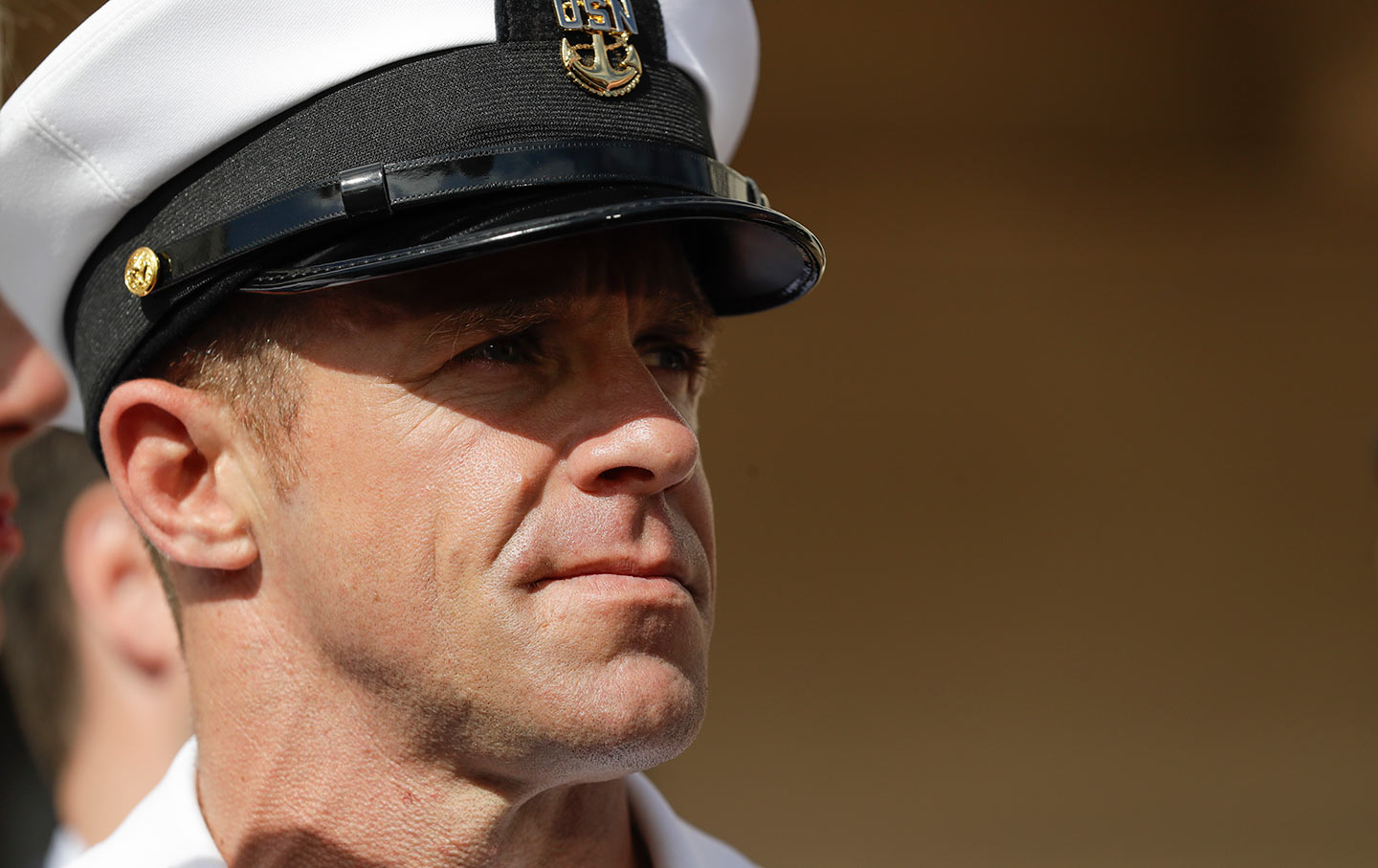 Navy Special Operations Chief Edward Gallagher leaves a military court on Naval Base San Diego. A military jury acquitted the decorated Navy SEAL of premeditated murder Tuesday in the killing of a wounded Islamic State captive under his care in Iraq in 2017. (AP Photo / Gregory Bull)

On Sunday November 24, Navy Secretary Richard Spencer was fired from his post after repeated clashes with President Donald Trump over the handling of the case of Edward Gallagher, a Navy SEAL who has been accused of multiple war crimes. One of the accusations centered around the killing of a teenage ISIS member captured in Iraq in 2017. As The New York Times reports, “Chief Petty Officer Edward Gallagher and other Navy SEALs gave the young captive medical aid that day in Iraq in 2017, sedating him and cutting an airway in his throat to help him breathe. Then, without warning, according to colleagues, Chief Gallagher pulled a small hunting knife from a sheath and stabbed the sedated captive in the neck.” Prior to his deployment, Gallagher had written to a superior, “We don’t care about living conditions. We just want to kill as many people as possible.”

Trump repeatedly tweeted in support of Gallagher while he was on trial. In July, Gallagher was convicted of one charge of posing in a trophy photograph. In his capacity as Navy secretary, Spencer wanted Gallagher’s status to be decided by a peer review board, which would determine whether he should be demoted, receive a dishonorable discharge, and lose his trident pin (signifying membership of the elite SEAL unit). Trump overruled Spencer on these matters.

While Spencer’s resistance to Trump’s actions is admirable, it was also rooted more in turf protection than in condemnation of the moral enormity of Trump’s embrace of war criminals. “This was a shocking and unprecedented intervention in a low-level review,” Spencer wrote in The Washington Post after his firing. “It was also a reminder that the president has very little understanding of what it means to be in the military, to fight ethically or to be governed by a uniform set of rules and practices.”

While the reference to fighting “ethically” hints at the moral issues at stake, the burden of Spencer’s comments is on the deleterious effect of a president interfering with military protocol. As so often in the Trump era, what is actually a political dispute is recast as a struggle over norms. But the issue of violating norms is ambiguous. While Trump’s actions are despicable, a president does have sweeping pardon powers. Further, the principle of civilian control over the military is worth defending, even if Trump uses it for a bad cause.

Trump’s championing of Gallagher is wrong not because it causes military leaders to wrinkle their noses, but because it is part of a larger push to normalize war crimes. Indeed, Trump’s actions can be seen as the fulfillment of a promise Trump made during his campaign, when he often complained that American soldiers were being shackled by rules that prevented torture and slaughter.

In a 2016 town hall in Wisconsin, then candidate Trump complained, “The problem is we have the Geneva Conventions, all sorts of rules and regulations, so the soldiers are afraid to fight. We can’t waterboard, but they can chop off heads. I think we’ve got to make some changes, some adjustments.”

Trump doesn’t have the right to end American participation in the Geneva Conventions, but he’s found a work-around by using the presidential pardon power. Aside from Gallagher, he’s mitigated the punishment of two other soldiers accused of war crimes. By doing so, Trump is remaking the military. Going forward, soldiers know that if they commit war crimes while Trump is in office, they’ll have a commander in chief receptive to pardoning them.

America’s allies and foes will also know that they are dealing with a military unshackled by long-standing rules of war. Even if the Democrats win in 2020, Trump has created a precedent for future Republican presidents, rendering rules restricting war crimes provisional and open to quick overturning. With a few simple interventions, Trump has effected a far-reaching policy revolution.

According to The New York Times, Trump’s embrace of war crimes is straining his relationship with the top brass. “The case of the president and a commando accused of war crimes offers a lesson in how Mr. Trump presides over the armed forces three years after taking office,” the newspaper reports. “While he boasts of supporting the military, he has come to distrust the generals and admirals who run it. Rather than accept information from his own government, he responds to television reports that grab his interest. Warned against crossing lines, he bulldozes past precedent and norms.”

As with Spencer’s Washington Post op-ed, this framing of the issues is too tepid and plays to Trump’s political strengths. By posing this as a battle between a rules-breaking commander in chief and norm-preserving military leaders, Trump’s critics are allowing him to adopt a heroic pose. He can be Dirty Harry or Rambo, the tough guy who doesn’t follow the regulations but gets the job done.

This is precisely how Trump presents the issue to his base. At a recent rally in Florida, Trump styled himself as a foe of the Deep State. “We’re going to take care of our warriors and I will always stick up for our great fighters,” Trump said. “People can sit there in air-conditioned offices and complain, but you know what? It doesn’t matter to me whatsoever.”

It’s understandable why military officials would restrict themselves to a constrained critique of Trump that avoids politics and focuses on norms. What’s been largely missing is any political critique from outside the military. The historian Waitman Wade Beorn is a rare exception. Writing in The New Republic, Beorn noted that “Trump is now breaking the moral backbone that prevents war crimes, demolishing America’s military institutions and replacing them with his own cult of personality and bankrupt values system.” This is exactly the sort of political attack that needs to be made.

Military men don’t have the power to stop Trump from normalizing war crimes. Nor should they have that power in a democracy where the military is under civilian rule. It’s up to Trump’s political opponents to find the courage to take up this cause.