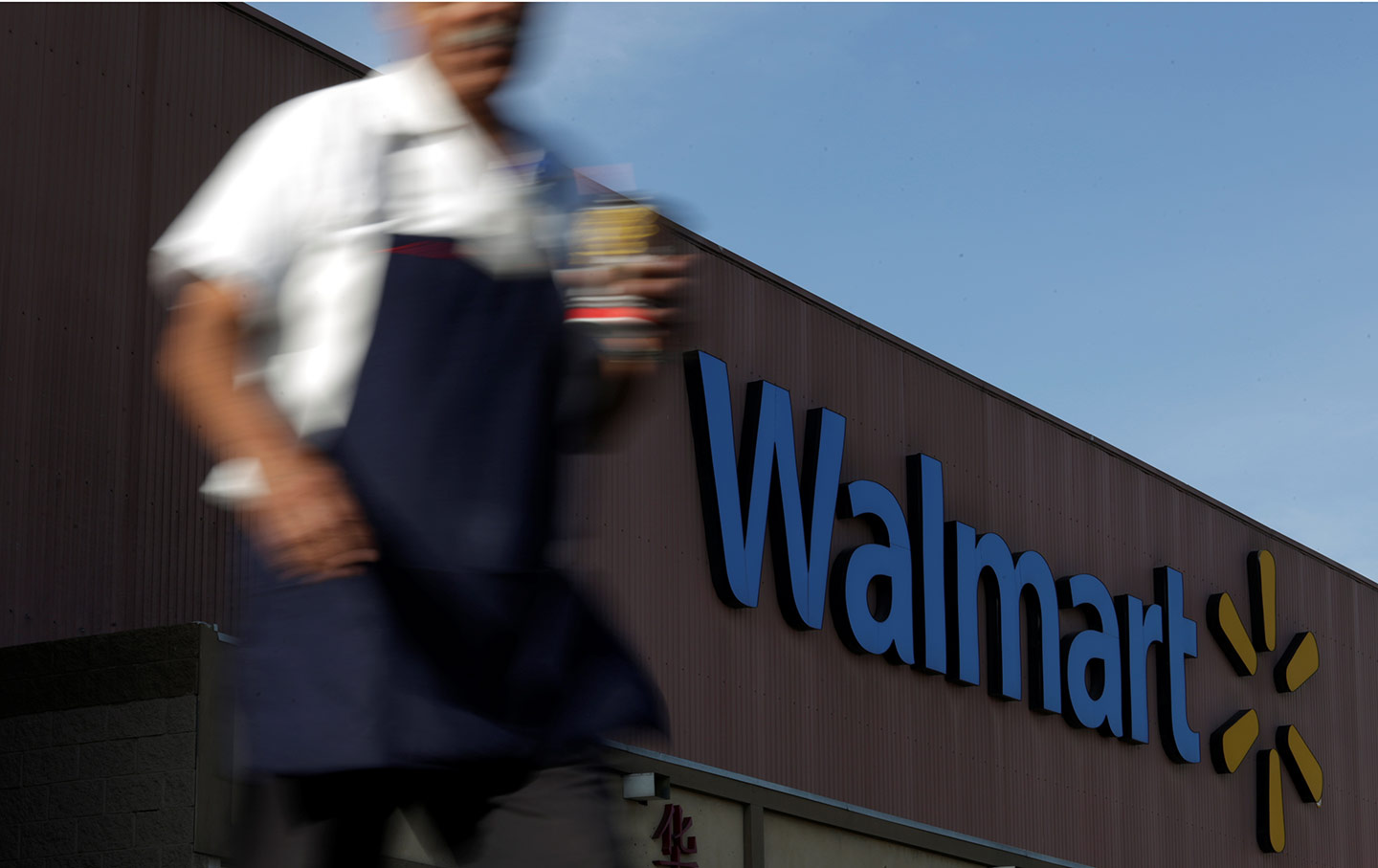 An employee walks out from a Walmart store in Monterrey, Mexico, April 26, 2017. (Reuters / Daniel Becerril)

As if the low wages Walmart’s associates make weren’t bad enough, it turns out the mega-retailer is also failing to abide by federal sick-leave law. According to labor advocates, the company’s strict “point system” for regulating workers’ schedules is penalizing people for getting sick or caring for their family’s health—even when the law entitles them to leave time.

A new report reveals that workers subjected to Walmart’s harsh scheduling rules fear their supervisors’ cold calculations are discounting the value of the health of loved ones, as they are consistently denied time off to care for family in times of need. Workers have reported being arbitrarily denied their right to take time off for family health needs, and even punished for missing work for a medical emergency. According to a voluntary online survey of some 1,000 workers, nearly eight in 10 said they had been “punished” by management for an emergency medical absence.

Under Walmart’s disciplinary system, workers rack up points for missed work time under a “three strikes you’re out” policy, according to the advocacy group that led the survey, A Better Balance (ABB). When they end up getting “pointed out” for the time off that they must take to deal with family health crises, workers end up having to choose between risking their jobs or risking their family’s health—often while struggling to earn enough to cover basic health-care needs.

ABB says Walmart is ignoring the Clinton-era Family and Medical Leave Act, which guarantees long-term workers at medium-sized firms up to 12 weeks of unpaid time off for self-care or family care. Though it offers no supplementary wages, it’s the bare-minimum protection against arbitrary firing for a medical condition. Walmart’s cheap-and-fast business model, however, uses disciplinary points to enforce a de facto “zero tolerance” policy on workers’ health and caregiving needs, and, according to ABB’s research, consistently violates the law’s requirement that employers proactively inform workers of their rights under the FMLA. Most workers surveyed said they had not even been informed about their right to unpaid time off, despite explaining their medical situations to management.

Workers’ lives can be profoundly impacted when they’re unaware of their right to leave time. One respondent, “Chris” in Pennsylvania (names were changed to protect privacy), recounted that after his daughter was born with a congenital brain defect, his parenting needs got him “pointed” under Walmart’s policies. “It causes a lot of issues for babies. When I have been absent to help with an issue my daughter is having, I get a point,” he said. “Walmart hasn’t let me know about the FMLA.” Ashana in Tennessee recalled racking up points when her son was hospitalized with pneumonia, “even after telling management why I was out. They give points no matter what.”

Sometimes denying a worker a sick day can hurt customers as well. Robin, a Walmart worker in West Virginia, recalled that when her son was sick with strep throat and she asked her boss for time off to care for him at home, “He told me I had to come in—even though I was contagious and could infect my co-workers and customers—or be pointed.”

Citing numerous reports of Walmart management’s ignoring workers’ medical documentation, ABB argued, as a matter of due diligence, that “Walmart’s policy and practice of refusing to consider doctors’ notes, and telling employees that medical issues are no ‘excuse’ for absences, prevent it from identifying and properly classifying absences that are protected under the FMLA.” Walmart might also be violating the Americans with Disabilities Act and state-level protections for pregnant workers, which guarantee workers’ right to request reasonable accommodations for disability or pregnancy issues.

Though employers can deny time off under these laws for business reasons, ABB notes that “Employers cannot claim something is an undue hardship just because it causes some expense or inconvenience,” unless they can prove the request was “unreasonable” in relation to the damage to the company—not likely when a single shelf-stocker has to skip a nightshift to nurse a sick infant.

Walmart, which has not responded to an inquiry from The Nation, has publicly denied charges of violating the right to medical leave, insisting that it provides appropriate channels for workers to request necessary unpaid or paid leave. To many workers, however, Walmart’s attitude toward the right to medical leave reflects a pattern of treating them as disposable goods.

Such policies run counter to a recent wave of reforms in workplace policy. Over the past decade, legislation for paid sick days, which protects both job security and wages, has passed or is pending in seven states and more than 30 localities. And while 41 million workers nationwide still lack any form of guaranteed paid leave time, a few states offer blanket coverage for paid family leave and progressive lawmakers are pushing similar legislation in Congress.

As one of the largest employers in the country, though, Walmart’s corporate climate of discipline is holding back progress in social policy.“The way Walmart’s absence control program is designed and implemented,” ABB concludes, “makes workers requiring reasonable accommodations more likely than other workers to be pushed out of their jobs.”

For Texas Walmart associate Brittany, the conflict between Walmart’s rules and her caregiving duties got resolved in a more painful way.

She worked at Walmart while serving as the main caregiver for her mother, who was drifting in and out of the hospital with various liver and heart ailments. Brittany scraped by on wages of less than $11 an hour, securing bare-bones health coverage for her mother’s care, while her requests for time off from her overnight shifts were repeatedly denied. Though her supervisor understood her family situation, she says, she was repeatedly told, “We understand your mom’s sick, but you’re missing too much work.” Management also refused to let her rearrange her days off simply to avoid missing consecutive work days during her mother’s last weeks. She avoided appealing to a higher manager, she says, because “I felt like it would do no good and I felt like I would be retaliated against.” At her store, “If you go tattle tale on somebody, you’re going to get your hours cut or get written up for stuff, and you eventually get fired.”

Walmart workers have been fighting for scheduling-policy reforms through lawsuits, labor complaints, and extensive online campaigns, aiming to shame the retail giant for putting profits over workers’ health. But, personally, Brittany isn’t interested in litigating her own case so much as making sure no other worker has to suffer the same ordeal—her wife, also a Walmart worker, is now going through the same struggle trying to care for her ailing mother.

Now Brittany is ready to move her family on from Walmart and is seeking a job at a fairer workplace. “I could live with Walmart,” she says, “but I don’t want to stay with a company with the values that they have and the way that they treat people. Because I don’t want to be any part of that.”