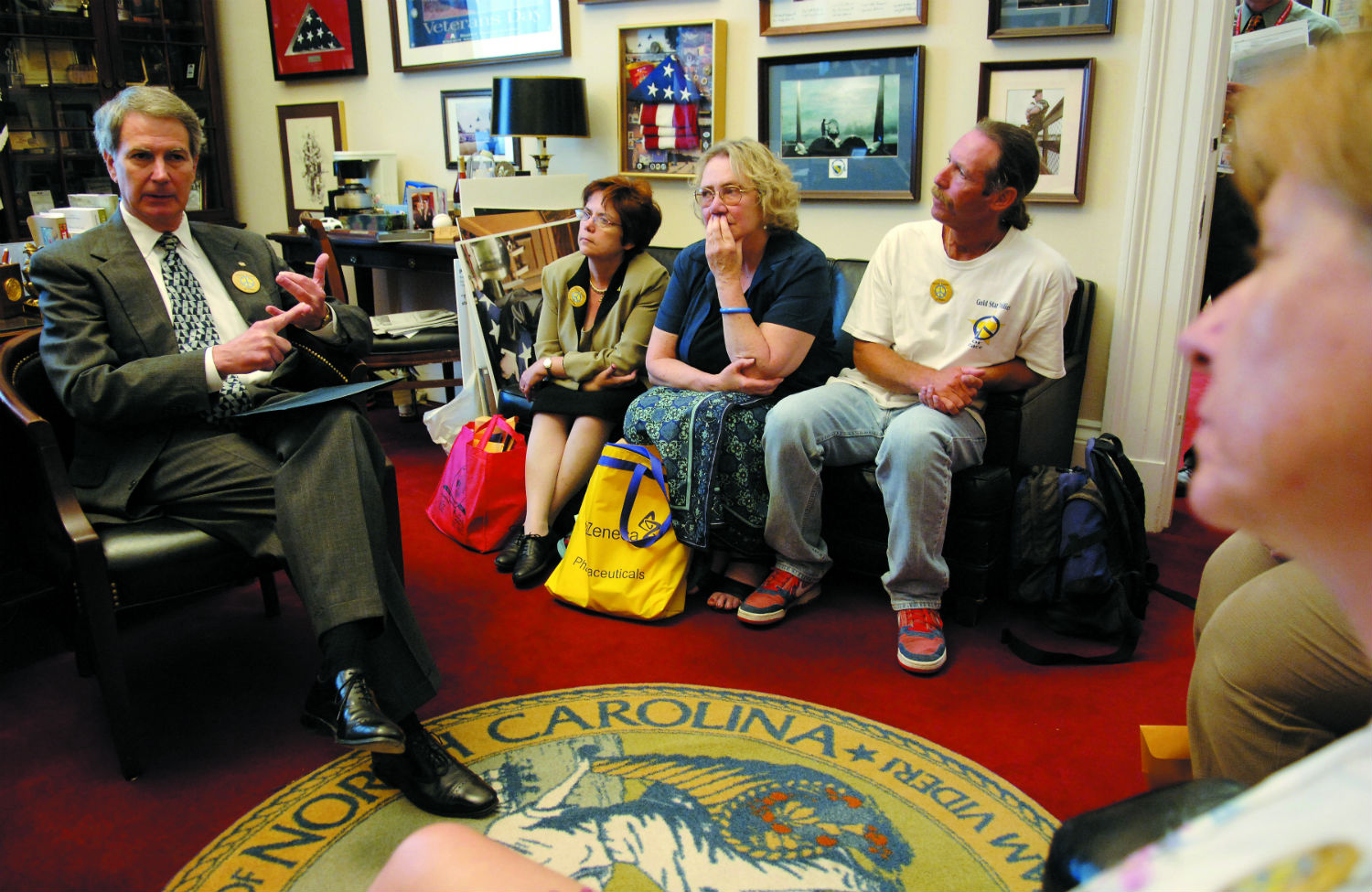 Across the country, at the grassroots level, Republicans have formed alliances with Democrats to demand that the influence of money in our politics be reduced. As the reform group Free Speech for People noted last year, dozens of Republican legislators have backed calls by states for a Constitutional amendment to overturn not just the Citizens United ruling but other barriers to the regulation of money in politics. With backing from third-party and independent legislators, as well, the passage of the state resolutions highlights what the group refers to as “a growing trans-partisan movement…calling for the US Supreme Court’s misguided decision in Citizens United v. FEC (2010) to be overturned, through one or more amendments to the US Constitution.”

In Washington, however, Republican reformers are harder to come by—as was evidenced by the celebrations of the Supreme Court’s McCutcheon v. Federal Election Commission ruling by GOP congressional leaders. Leaving no doubt about his faith that those with the most money get to speak the loudest in our elections, House Speaker John Boehner, R-Ohio, hailed the Court’s decision to strike down limits on aggregated campaign donations by wealthy Americans with an announcement that “freedom of speech is being upheld.” At the same time, one of the attorneys who argued for elimination of the cap on aggregate donations said Senate Republican Leader Mitch McConnell—who Kentucky media noted “filed an amicus brief on the McCutcheon v. FEC case as a part of his continued crusade against campaign finance reform”—had been “extremely helpful” in pushing the court to go even further than McCutcheon’s legal team had initially proposed.

Yet, despite Boehner’s enthusiasm and McConnell’s ambition, the party leaders do not speak for every Republican in Washington.

Three years ago, Congressman Walter Jones, R-North Carolina, signed on as a co-sponsor of one of several proposals to amend the constitution in order to renew the power of the people and their elected representatives to regulate money in politics. More recently, he co-sponsored a proposal by Congressman Jim Yarmuth, D-Kentucky, to develop public financing for congressional elections. Jones is on board with Government By the People Act of 2014, a “matching-funds” plan offered by Congressman John Sarbanes, D-Maryland. And he is the only Republican co-sponsor of the Empowering Citizens Act, a plan by Congressman David Price, D-North Carolina, to renew the public financing system for presidential elections.

On his own, Jones has sponsored legislation to bar the use of political funds for personal purposes.

What is Jones thinking? “I think Citizens United was one of the worst decisions by the Supreme Court in my adult lifetime,” the congressman said last year. “In Washington, the problem is that the leadership in both parties—and I want to be fair about that: both parties—seem to like the system the way it is… When the Democrats were in the majority, it was very difficult for those [reform] Democrats to get the bills moving on their own side. And on my side, it’s almost like it’s a dead issue, which disappoints me greatly as a Republican. Now, I will work this year, across party lines, to reform the campaign laws of our nation.”

Like many of the most progressive reformers in the country, the conservative congressman speaks specifically about the link between special-interest influence on elections and political dysfunction in Washington. “If we want to change Washington and return power to the citizens of this nation, we have to change the way campaigns are financed,” he says. “The status quo is dominated by deep-pocketed special interests, and that’s simply unacceptable to the American people.”

Congressman Jones is noting something that too many DC insiders, be they Republicans or Democrats, members of Congress or pundits, fail to recognize: millions of Americans are already engaged on this issue. Support for real reform is widespread, crossing lines of partisan and ideological division. Sixteen states and more than 500 communities have called for amendments with varied language but one point: that “based on the American value of fair play, leveling the playing field and ensuring that all citizens, regardless of wealth, have an opportunity to have their political views heard, there is a valid rationale for regulating political spending.”

Now, however, Jones faces a Republican primary challenge from a classic Washington power player, Taylor Griffin, a former aide to the campaigns of George W. Bush and John McCain who has been a consultant for big banks and trade groups and who put in a stint as the senior vice president for the Financial Services Forum, the DC voice of some of the biggest Wall Street banks. “[No] matter how he casts himself,” writes Politico, “Griffin is an insider.”

Griffin’s gripe with Jones appears to be that the veteran congressman is too independent-minded. And it is true that Jones breaks rank with party orthodoxy. For instance, he has been one of the most outspoken critics of US military adventurism, often working with Congresswoman Barbara Lee, D-California, on issues of war and peace. This has put him at odds with the Bush and Obama administrations, and more recently with House Budget Committee chairman Paul Ryan, R-Wisconsin, whose 2013 budget Jones said was too lavish in its funding of wars. But Jones is hardly a left-winger. He echoes the “old-right” language of conservative icons such as former Ohio Senator Robert Taft Sr. and former Nebraska Congressman Howard Buffett, and of some younger libertarian-leaning House members such as Michigan Republican Justin Amash.

What really bugs Griffin and his DC backers is that Jones does not follow the party line when it comes to doing Wall Street’s bidding. For the past decade, he’s been one of the steadiest congressional critics of free-trade agreements; and he recently joined twenty-one of his House Republican colleagues in expressing; opposition to “Fast Track” Trade Promotion Authority. And he’s been a steady critic of big banks, opposing bailouts, supporting regulation and arguing with Congressman Marcy Kaptur, D-Ohio, and others for the reinstatement of the Glass-Steagall Act that separated commercial and investment banking. Those stances undoubtedly played a role in getting Jones kicked off the House Financial Services Committee in Speaker John Boehner’s purge of so-called <“a href="http://projects.newsobserver.com/under_the_dome/walter_jones_kicked_off_house_committee" target="_blank">rebellious Republicans.”

Now Jeff Connaughton, the former Senate aide who wrote the book The Payoff: Why Wall Street Always Wins, suggests that Jones’s independence has earned him a challenge from Griffin in the May 6 Republican primary. “I doubt anyone in North Carolina needs me to point out this is a Wall Street bank hit job,” says Connaughton, who helped frame the fight for the 2010 Dodd-Frank financial regulation law.

Indeed, observes Politico, Griffin has had a cash influx from some of the most high-profile Republican lobbyists in Washington.

That’s helped Griffin get competitive with Jones, a rare accomplishment for a primary challenger. And as the May 6 election approaches, Griffin’s got the connections to bring in a lot more money. Like Mitch McConnell, he is a classic example of a candidate who could benefit in a very big way from the Citizens United and McCutcheon rulings.

Walter Jones will have a harder time tapping top Wall Street donors than Taylor Griffin—in no small part because of the incumbent’s record of saying “no” to the banks.

Most members of Congress have a hard time saying “no” not just to bankers but to big money in general. That’s one of the reasons why Jones has advocated for both financial services reform and political reform. The two go together. Indeed, in this era of Citizens United and McCutcheon, the measure of political independence must begin with a willingness to address the influence of money on our elections. It is Jones’s recognition of that fact that has made him a conservative advocate for reform. He understands that some truths go beyond partisanship and ideology, and the first of these is that, “If we want to change Washington and return power to the citizens of this nation, we have to change the way campaigns are financed.”