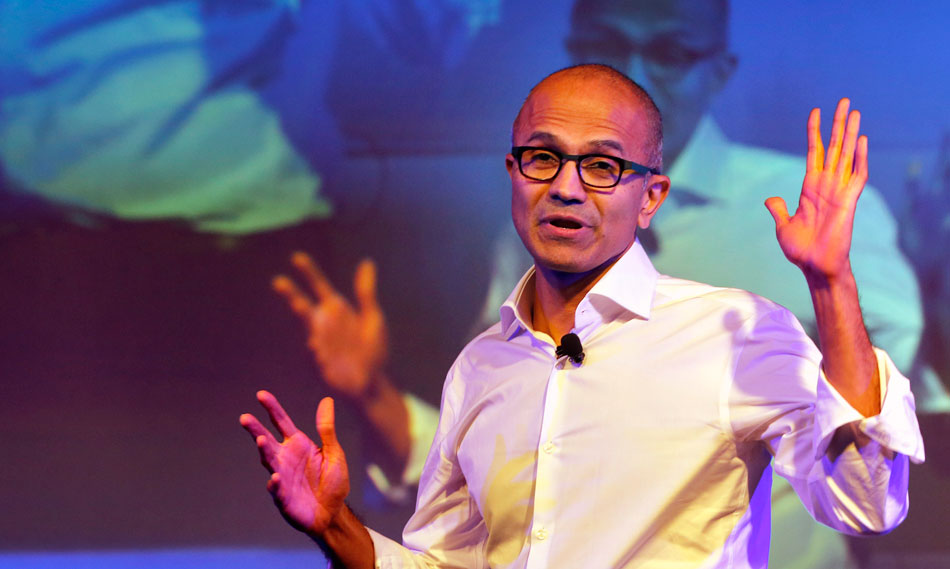 Microsoft CEO Satya Nadella speaks to students in New Delhi. On Thursday, October 9, 2014, Nadella spoke at an event for women in computing held in Phoenix, saying women don't need to ask for a raise—they should just trust the system. (AP Photo/Manish Swarup)

Last week, Microsoft CEO Satya Nadella sparked a firestorm of criticism for comments he made at a women-in-tech conference in which he suggested that employees who feel underpaid should wait it out rather than ask for more money. But he went even further, saying something many headlines missed: a woman who doesn’t ask for a raise, he added, is “the kind of person that I want to trust. That’s the kind of person that I want to really give more responsibility to.” Executive to pushy women who ask for more: Could you not?

The backlash was so swift and severe that he had issued a backpedaling e-mail by the end of the business day. While he didn’t apologize, he did reverse his position—now he claims to be pro–asking for more money.

He’s only the latest tech executive to put his well-paid foot in his mouth when giving advice to female employees. Just weeks before, Australian Evan Thornley, who founded the online advertising company LookSmart, told an audience that he could hire talented women “relatively cheap to someone less good of a different gender.” The pay gap, for him, represents “great arbitrage.” Women: talent on the cheap thanks to the gender wage gap.

He also later backtracked, saying that his intention didn’t come out right—he meant to deride gender inequality in the tech industry and urge other companies to “hire talented women and pay them properly” instead of hiring incompetent men and giving them top dollar.

But what leaked out of these two executives’ mouths likely contains a good deal of truth. It is a narrow window into what they, and many of their peers, really think about women—which usually goes unsaid. And it exposes the fact that all the nice talk about wanting greater diversity may stand little chance against the unconscious (and sometimes very conscious) biases women face in the tech industry. The misconceptions and unfair perceptions of women swirling in men’s heads hold women back. And the reality is, women are underpaid in tech. Women working in science, technology, engineering or math (commonly known as STEM) jobs make $15,900 less than men a year. College-educated women in Silicon Valley make $21,599 less. Even with various factors taken into consideration, female computer scientists make 89 percent of what male ones make. Looking at the data, it’s obvious that politely waiting until bosses offer raises isn’t working.

But they’re not just paid less. They’re also scarce. A new trend emerged recently: starting with Google in May, tech companies finally began releasing the demographic breakdowns of their workforces. Nearly every one has come with the familiar caveat that they want to do better and improve the numbers. Even so, as it stands, they all look eerily similar. Here’s women’s share of technical (not administrative or supportive) jobs at each: Twitter, 10 percent; Yahoo!, 15 percent; Facebook, 15 percent; Google, 17 percent; Apple, 20 percent; Pinterest, 21 percent; eBay, 24 percent; and Microsoft, where women are probably now thinking twice about asking for a raise, 17 percent.

Not a single company has a tech workforce that is fully a quarter female—which in itself would be a pitiful milestone anyway since women get 40 percent of science and engineering degrees and make up half of the overall workforce. These companies say they want to do better. Why haven’t they yet?

Perhaps because they say one thing but do another. They want us to believe that they seek men and women equally and simply come up short in finding qualified female candidates. But what counts as “qualified” may be different if you’re quick to see woman as too aggressive or undervalued. They say they want more women, but they fail to hire more women.

Nadella is hardly unique in wanting to stay away from pushy broads. Both genders are less likely to want to work with or hire women who ask for raises. Men get away with asking for money, though, and even get rewarded with higher paychecks. Generally, when a woman acts assertively at work, she faces a backlash, both socially and financially. So if a woman gets up the gumption to try to break into the male-dominated tech field, it’s very possible that the men she has to win over at the top will just see her as pushy.

Even when just doing their work, women in tech face a backlash. When Kieran Snyder of Fortune magazine asked men and women in the industry to share their performance reviews with her, she found that women were far more likely to get criticism, and when the feedback was negative it focused on their personalities, not how to improve their skills. Guess what words kept coming up in women’s reviews? “Abrasive,” “bossy,” “strident,” and “aggressive.” Outside of performance reviews, women are called bossy nearly three times as frequently as men and pushy twice as frequently.

The attitudes that Nadella and Thornley revealed aren’t only found in tech. Women are presumed to have all professional doors open to them today, but the gatekeepers still harbor ideas about them that will stymie progress. Tech executives want us to think they’re working on their gender problems. But then they say things that belie a different attitude toward the opposite sex. It takes more than lip service to achieve gender parity in any workplace or industry—or better representation of race, sexual orientation and other identities. It takes deliberate, across-the-board effort that is accountable to the very top. It may even take quotas, at least at the very top.

And clearly waiting for bosses to close the gender wage gap isn’t going to cut it if they get queasy at being asked for more or even use it to their advantage. Closing the gap, in tech and elsewhere, has to be done with government legislation, regulation, and enforcement.

These two executives can walk back their words. But what is said off the cuff, even in front of an audience full of women, gives us insight into what women are still up against.