Ralph Northam won the Virginia governor’s mansion last year after running a campaign that strongly advocated expanding Medicaid in the state, as allowed by the Affordable Care Act. In doing so he captured 77 percent of the vote among the 39 percent of voters who considered health care to be their most important issue.

The state legislature has now called a special session to debate that expansion, and on Tuesday night the House of Delegates passed a budget that would expand Medicaid. But the State Senate has rejected a similar bill once already this year, and may do so again. While the issue remains deeply divisive among Virginia’s legislators, the same cannot be said for Virginians themselves. According to new data from Civis Analytics, presented in a new Indivisible and Data for Progress memo, Medicaid expansion has majority two-way support in every Virginia state legislative district in the state. Two-way support means people who responded “don’t know” were excluded, indicating that people who know about the issue and would be more likely to vote on it are overwhelmingly supportive.

Civis polled 2,400 adults, including 1,400 likely voters, about Medicaid expansion at the beginning of April. Civis then used multilevel regression and poststratification to generate estimates of public opinion for every state legislative district. And this was no push poll: It explicitly mentioned a revenue source for the proposal, and included partisan language: “Democrats in your state’s legislature are proposing a bill to expand eligibility for Medicaid to provide health insurance to families that make less than 138 percent of the federal poverty line. This expansion would be paid for by a 1.4 percent tax on hospital revenue. Would you be for or against this policy?”

The results were unequivocal: Medicaid expansion is enormously popular across all districts. In every House of Delegates and State Senate district in Virginia, likely voters support Medicaid expansion, often by an overwhelming margin, with 66 percent and 67 percent supporting expansion in the median House of Delegates and State Senate districts respectively. Support for expansion never dipped below 55 percent in any district in Virginia, and reached as high as 85 percent in some others. 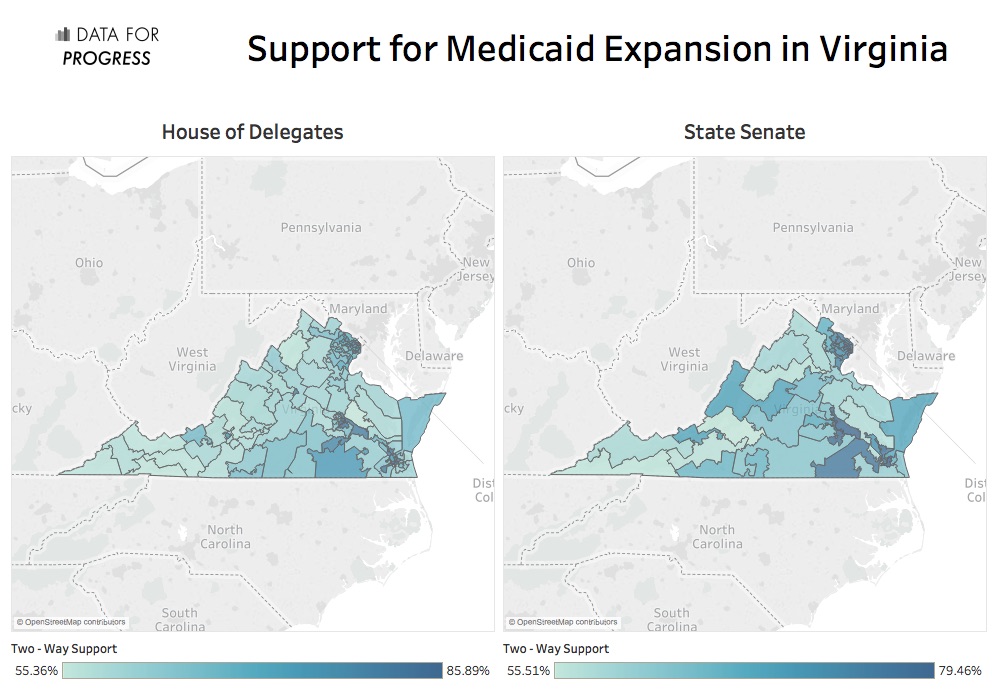 This support is durable even among Republicans and within GOP-controlled districts. In the median House of Delegates district, net opposition among Trump voters is only nine points. Support for Medicaid expansion is strong even in deep Trump country. For example, in House of Delegate Districts 1 and 3—both of which Trump carried with at least 81 percent of the vote—Medicaid expansion has two-way support of 56 percent among likely 2018 voters.

“In November, Democrats won in Virginia by running on Medicaid expansion. This data supports the election results and shows us that Medicaid is popular in every single district,” said Jiggy Athilingam, state-and-local-policy manager at the Indivisible Project. “While the legislature convenes now to debate Medicaid expansion during the special session, they should know that if they do the right thing and expand Medicaid, the voters are behind them.”

But despite these high levels of support, the result of the upcoming special session is unclear; two Republican senators who voted against expansion earlier this year reportedly will “consider” changing their vote. What they would need to get there is uncertain, and before the election, Northam briefly suggested he might be open to compromising on Medicaid, eliciting a strong reaction from the base—and understandably so.

Many new members of the House of Delegates were elected after running hard on Medicaid expansion, and they won’t just drop it upon arrival in Richmond. New House of Delegates member Jennifer Carroll Foy told us that “One of the travesties I’m witnessing is [Virginians’] inaccessibility to quality, affordable health care to obtain their medications, to get cancer treatment and have life-saving surgery.” She added that expansion will “help us tackle the opioid crisis in Virginia where people are dying from overdoses at a rate higher than from car accidents. We will be able to afford to treat our mentally ill citizens who are in desperate need for medications.”

Fellow new Delegate Hala Alaya concurred: “This is the right thing to do.”

Democrats we talked to expressed optimism that GOP members will begin to feel political gravity. “I have high hopes for our special session next week. I believe that our colleagues across the aisle want to be part of the right side of history by supporting Medicaid expansion in Virginia,” said delegate Elizabeth Guzman, who gave the Democratic Party’s 2018 Spanish response to Trump’s State of the Union address. “The fact that this hasn’t been done before now is honestly embarrassing,” she added. “We neglected to bring more than 12 billion federal dollars back to Virginia that we could have invested in mental health, public education and transportation.”

For Guzman, the work that organizations like Invisible are doing could be a deciding factor. “When you have hundreds of your constituents calling, writing, e-mailing, and knocking on your door, you need to take note, because those that won’t will face the consequences in 2019 when they lose their seats.” Our analysis suggests she’s correct—politicians who refuse to accept Medicaid expansion are defying their voters and risk a backlash in 2019.

Virginia is only one of more than a dozen states that have yet to expand Medicaid. That it has failed to do so despite wide popular support among constituents is not a circumstance unique to the Old Dominion. “There’s nothing special about Virginia,” said Michael Sadowsky, a data scientist at Civis Analytics. “Even paired with taxes, Medicaid expansion has universal support among Democrats and nearly even splits Trump voters, that’s enough to win anywhere.”

Indeed, another recent analysis by Data for Progress, using the Cooperative Congressional Election Studies from 2014, found that Medicaid expansion has 50 percent support or more in every state but Wyoming. Even in deep-red states like Tennessee, Medicaid expansion elicits broad support. 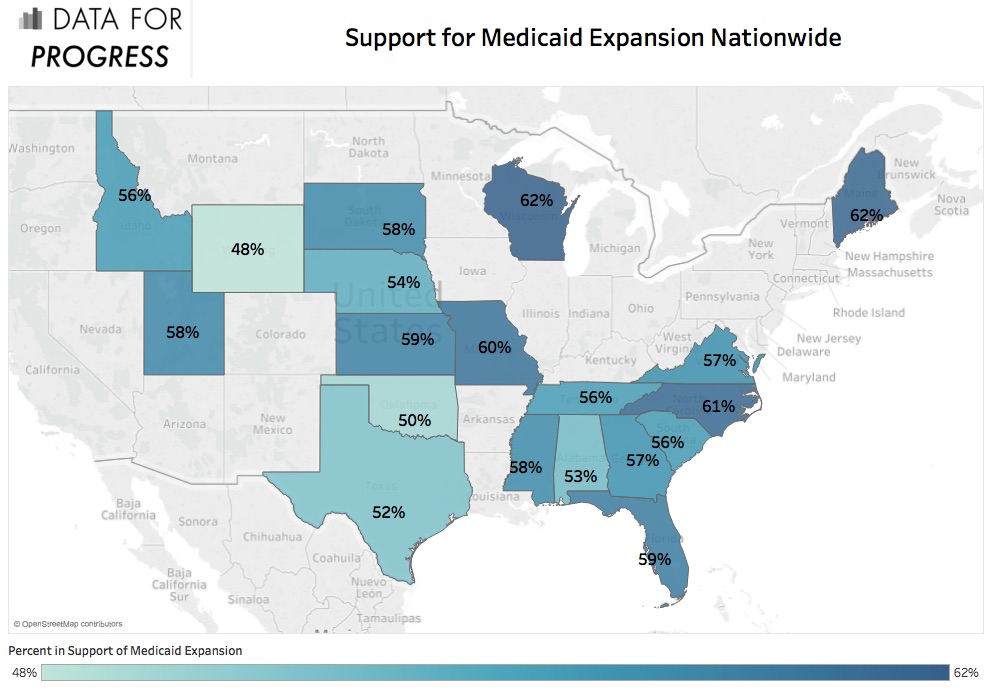 Democrats therefore have every political incentive to simply do the right thing. They should use Medicaid expansion as a way to put Republicans on the defensive and mobilize marginal voters who drift in and out of the electorate.

There will be some hurdles: One of the reasons for the disconnect between the popularity of Medicaid expansion and its lagged implementation in states under GOP control is voter disenfranchisement; Republicans deny affordable health care to the same constituents whose right to vote they have actively suppressed. But another key roadblock might be that state legislators believe that their voters are more conservative than they are in reality. This is why this polling analysis is so important.

And these battles are winnable: Last year, over the loud objections of Governor Paul LePage, Maine residents voted to expand Medicaid, and there are efforts to get similar initiatives on the 2018 ballot in Idaho, Utah, and Nebraska. In Florida, Gwen Graham has made outgoing Governor Rick Scott’s failure to expand Medicaid a central campaign issue, saying she would veto all Republican legislation until they passed Medicaid expansion.

If Democrats make big victories in 2018, they could dramatically expand Medicaid, with huge implications of millions of lives—studies show that thousands of people have died because the Republican Party refused to expand Medicaid. “Elections matter, building power in states with legislative majorities matters even more,” said Future Now Fund President Daniel Squadron, whose organization invested in last fall’s election in Virginia. “Election day changed the dynamic—and this can change people’s lives.”