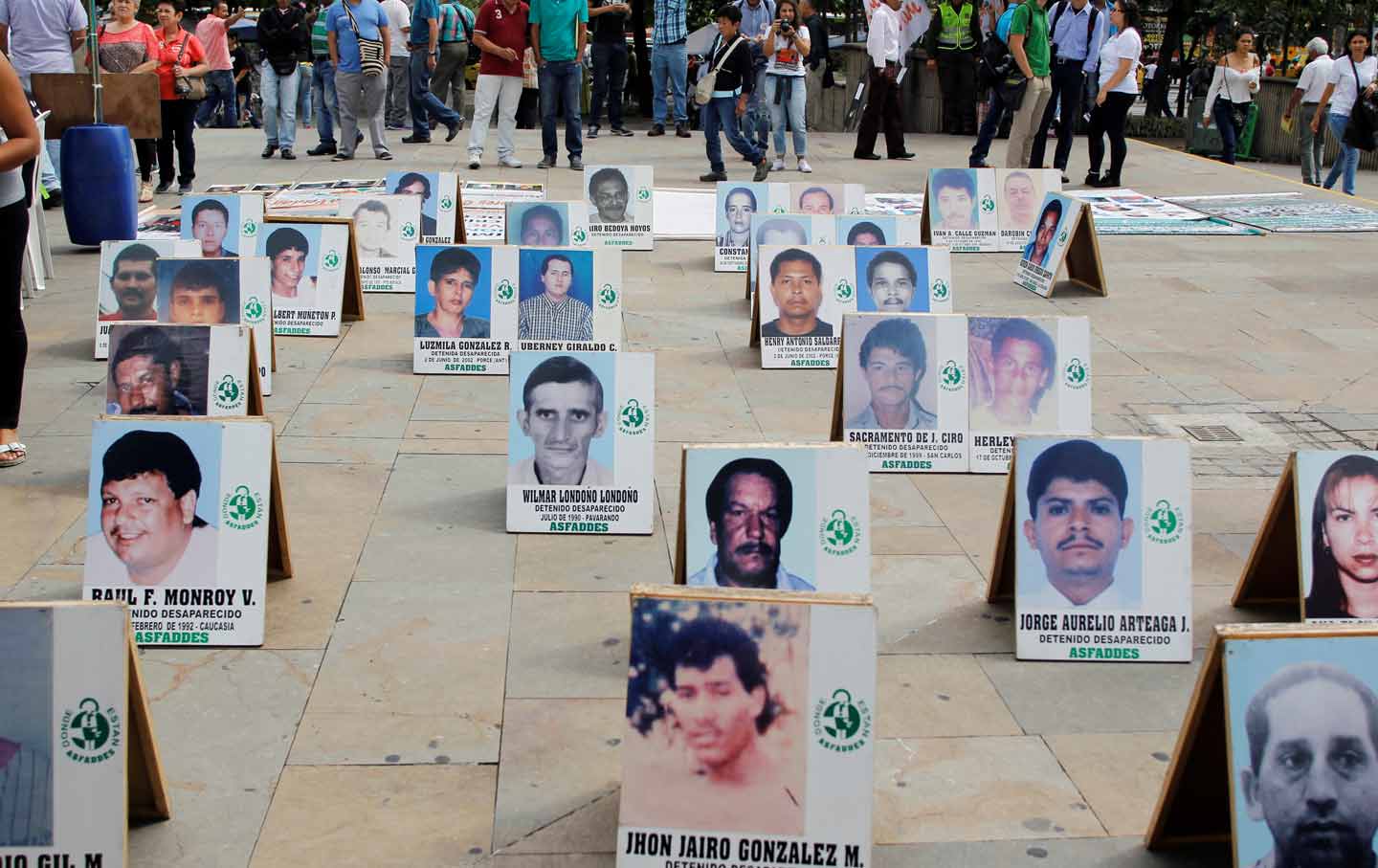 People stand near photographs of missing persons to mark the International Day of the Victims of Enforced Disappearances in Medellín, Colombia, August 30, 2016. (Reuters / Fredy Builes)

Before the United States elects a new president on November 8, a potentially more consequential vote will take place in the Americas. On October 2, Colombians will say yes or no to a peace agreement between the government and the FARC, an insurgent group whose roots stretch back decades, to the very beginning of the Cold War. It’s notoriously difficult to tally the number of the war’s victims, especially those who lived in the countryside, but this 2013 report by Colombia’s Historical Memory Group gives an idea of the scope of the brutality: hundreds of thousands dead, tens of thousands disappeared, serial massacres and systemic torture.

Perhaps the number that most challenges the imagination, especially when contrasted with the generally favorable coverage Colombia gets in the US press, relates to those driven from their homes and communities; 5.7 million people have been displaced over the last half-century, about 15 percent of Colombia’s total population. According to the report cited above, between 1985 and 2012—a period marked by increasing US involvement in the Colombian conflict, capped by Bill Clinton’s multibillion-dollar aid program, Plan Colombia—26 individuals every hour were displaced. Back in 1982, Gabriel García Márquez, in accepting his Nobel Prize for Literature, tried to convey the magnitude of “political disappearances” in Latin America to his Swedish hosts by invoking the Rapture: “Those missing because of repression number nearly one hundred and twenty thousand, which is as if no one could account for all the inhabitants of Uppsala.”

And here’s the Historical Memory Group, taking a page from García Márquez: “To understand the magnitude of forced displacement, it is enough to imagine an exodus of all the residents of cities such as Medellín and Cali.”

Some of this displacement was directly related to war, and can be blamed on the military and the FARC. But much of it has to do with the fact that the US-bankrolled counterinsurgency was cover for a massive paramilitary land grab. As the anthropologist Winifred Tate put it:

The Colombian countryside has experienced what is called ‘the reverse agrarian reform.’ Beginning in the 1980s, drug traffickers, many of whom became paramilitary leaders, began buying up land and using violence and threats to push people off the land. Victims reported being told, I’ll buy from you or your widow. Land was used to launder money and to buy their way into the respect of the elite. Much of this land has been taken over, directly or through third-party sales, by regional elites, agribusiness involved in teak, oil palm, or banana production, or the growing extractive industries. According to one estimate, as many as 6 million hectares of land changed hands. Nobody really knows—in many places, paramilitary groups burned land registries, while in other regions these registries are inaccurate, or the files lost or not maintained. At present, USAID reports that “in rural areas, less than 1% of the population owns more than half Colombia’s best land.”

In other words, Colombia’s long, long civil war has functioned as something like a war for the frontier, with paramilitary “settlers,” bankrolled not just by Washington, US corporations, and narco profits but also by international development banks, dispossessing smallholders. Many of the victims of this land rush were Afro-Colombian and indigenous communities, who make up a disproportionate percentage of the displaced. Mining, oil, and bio-fuel production have been the main drivers of much of the violent dispossession.

Most polls at this point have a majority of Colombians voting yes to end the war, despite a fierce, increasingly desperate campaign by former president Alvaro Uribe to derail the peace process. Uribe, who is currently in the Senate, is the leader of paramilitary power, and, along with his political supporters, has charged Colombia’s current present, Juan Manuel Santos, with “delivering the country to terrorism.”

In many ways, Uribe and Santos embody platonic ideals of two opposing political factions: Santos represents the traditional urban oligarchy; Uribe, in contrast, bears the standard of the nouveau-riche country bumpkin, a paramilitary class that, during Uribe’s presidency, had not only taken the highest level of political power but insinuated itself into all the country’s major institutions: the courts, the intelligence system, and the congress. Back in 2008, just as a number of captured death-squad leaders were set to expose Uribe’s ties to paramilitarism, they were, according to a recent report by Deborah Sontag in The New York Times, swiftly extradited to the United States.

Though the terms in which they will lose power are vaguely delineated in the peace accords, death-squad leaders rightly recognize the accords as a threat to their social power. And they have reacted in kind, accusing Santos of raising up the FARC as the moral equivalent of the armed forces and of being more concerned with getting favorable coverage in the international press and hobnobbing in Havana than providing security for citizens. Like Trump in the United States, Uribe is trying to rally the country’s security forces by appealing to resentment, saying that Santos negotiated away too much to the FARC. “It is unacceptable to justify the terrorist assassination of soldiers and police,” Uribe recently said. With polls turning against him, Uribe last week sent a letter to both Hillary Clinton and Donald Trump, appealing to the two candidates to denounce the Cuban-brokered accords. Clinton actually has a long history with Uribe, praising him in her memoir as a “hard-nosed, hands-on leader.” Both Bill Clinton, as an extremely well-compensated private citizen, and Hillary Clinton, as secretary of state, pushed for a free-trade agreement with Uribe’s Colombia. And the Clinton Foundation had deep ties with many of the Colombian interests that benefited from Uribe’s “hands-on” security policy.

Uribe’s ratcheting up of the extremist rhetoric, even if it fails to convince a majority of voters to cast a no ballot, is poisoning the peace process, and bodes ill for the future. The last time Colombia came this close to peace was in the mid-1980s, when peace talks between the FARC and other insurgent groups led to the establishment of the Patriotic Union (UP), a broad political coalition of leftists, including former insurgents, committed to run for political office. Quickly, the socialist party became a viable third party, challenging the lock on the state held by the oligarchic Liberals and Conservatives for decades. It was, for a brief period, “the most successful leftist party in Colombian history,” according to The Washington Post. Even more quickly, party members became targeted by landlords, death squads, and narcos for elimination.

The death toll is staggering: between 4,000 and 6,000 members of the Patriotic Union were murdered. More than 70 percent of all center-left presidential candidates in 1990 were assassinated as well. The murders were carried out by “a combination of drug dealers, right-wing paramilitary groups and members of the incumbent government and army”—a coalition that was in effect sanctioned and supported by Ronald Reagan’s renewed Cold War in Latin America. The US ambassador to Bogotá was opposed to the peace process, as Gabriel García Márquez noted at the time. And Washington was willing to work with drug traffickers when it suited them, especially when they were killing leftists.

As Mario Murillo writes: “The UP was made up of some of the most articulate voices and brilliant political minds of the Colombian left. Included in its ranks were progressive activists and intellectuals from the Communist Party, as well as the traditional parties, local and regional social movements, and the guerilla movement itself and its support base.” The slaughter of these Colombians, who mistakenly believed they would be allowed to participate in the political system, led the FARC to remilitarize, and to finance that remilitarization through narcotics and kidnapping.

For many of Colombia’s establishment politicians, the systemic and coordinated executions of UP candidates revealed for the first time the true power of the narco-paramilitaries. “We are before an organization stronger than the state,” former president Belisario Betancur said in November 1987. “The river of blood that is running through Colombia…appears to be conducted by criminal groups of great economic and logistical power which have the resources to strike wherever and whenever they want,” said Betancur. “You cannot talk about peace,” UP presidential candidate Bernardo Jaramillo said in February 1989, “if you do not effectively combat against paramilitary groups.” Jaramillo was dead within a year.

It is this “organization stronger than the state” that Alvaro Uribe effectively transformed into the state, especially in many rural regions where paramilitary affiliates run local governments. In the current peace process, President Santos, as did his predecessors in the 1980s, has committed the power of the national government to protect former guerrillas as the FARC transforms into an electoral party.

But in many remote areas, the paramilitaries rule, and they answer not to Santos but to Uribe. The killing has already started. According to the excellent Colombia Reports:

At least 13 activists who have been promoting peace with leftist FARC rebels have been assassinated in Colombia since the guerrillas and the government announced a ceasefire three weeks ago, the country’s human rights office said.

The assassinations reportedly took place near sites where the FARC is set to demobilize after a peace deal with the administration of President Juan Manuel Santos, scheduled to be signed on September 26, according to electoral observers.

Consequently, locals are terrified about the spike in political violence. The increase in killings and death threats was confirmed by independent electoral observers.

The Electoral Observation Mission (MOE), said that so far this year 22 activists and community leaders have been killed and another 45 have received death threats.

“What is concerning is that in the majority of cases they were killed presumably for reasons related to the promotion of ‘Yes’,” electoral observation NGO MOE said in their first report on irregularities leading up to the vote.

According to The Washington Post, the FARC hasn’t yet revealed the name of its future political party and can’t begin to form one until it disarms. Let’s hope when it does, it has better fortune than the Patriotic Union.