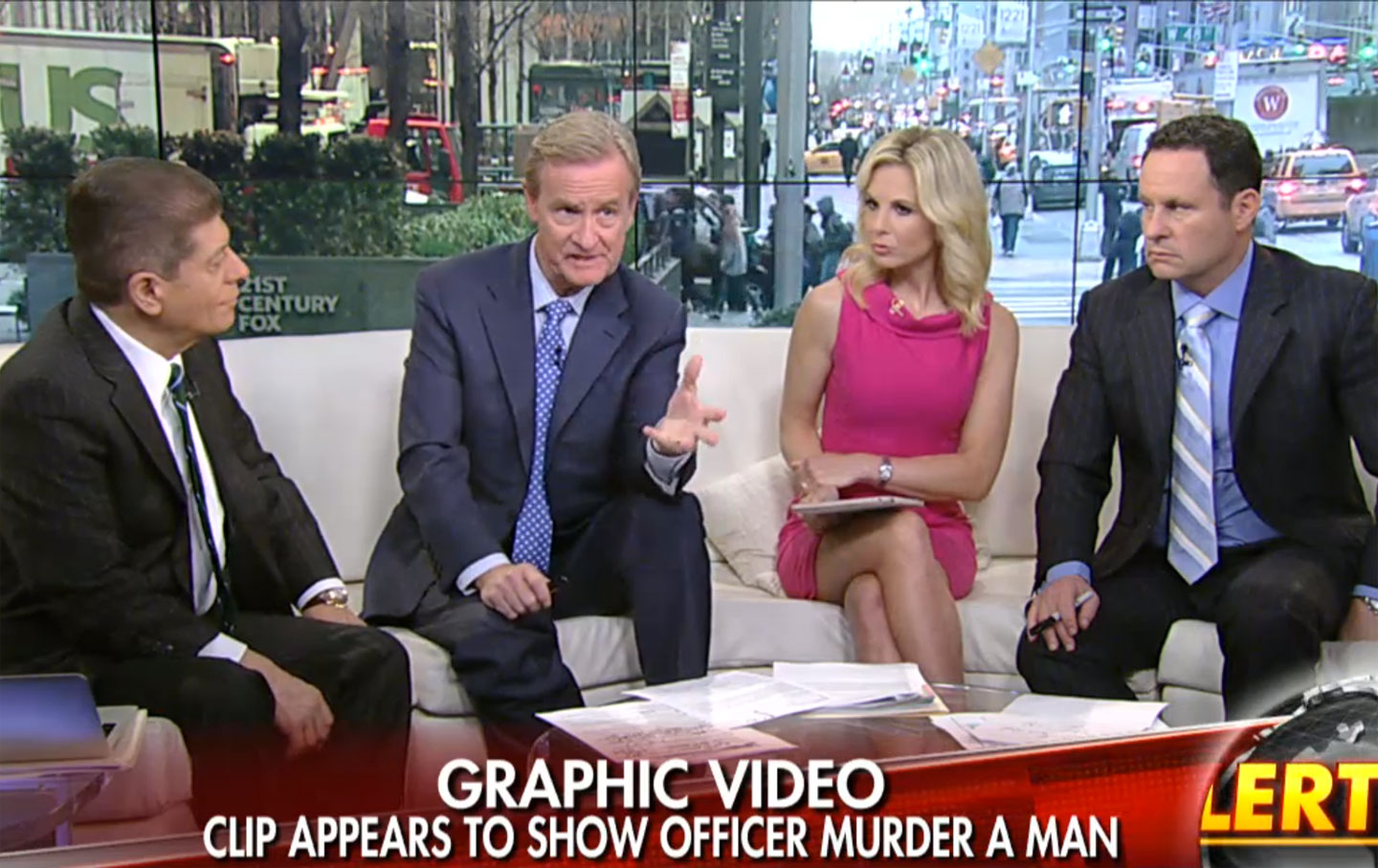 The three-minute-plus video shut up the inevitable police apologists who’d always find a way to blame the black guy for his own death by saying he acted in a threatening manner. But now, even Fox News folks are saying it’s right and just that Slager has been charged with murder.

“This is not Ferguson,” Andrew Napolitano said on Fox & Friends on Wednesday. “In Ferguson, there was a bona fide fight over the officer’s gun and the officer won the fight. This is [sic] two disparate cases. This is a victim running away from the police, shot in the back. This is what some people said Ferguson was, but it turned out it wasn’t.”

(UPDATE: You might think that the dash-cam video released last night showing the traffic stop and Scott running away would trigger a Fox instinct to reverse course and blame the victim. But, so far, that hasn’t happened. Sean Hannity said last night that Scott “was not a threat to anybody” and that it’s “irrelevant what happened leading up to” Slager shooting him. And this morning on Fox, conservative radio host Lars Larson said he still believes “the officer committed murder.”)

No, the Fox line seems to be that now that Slager is sitting in jail without bail, justice has been served, the system works. So let’s move on, folks. And, oh yeah, it’s not a race thing. Greg Gutfeld on Fox’s The Five claimed, as if channeling the “color-blind” Stephen Colbert, “I didn’t see a black man killed by a white cop. I saw a man shoot another man in the back.”

That’s funny, because the video is incredibly detailed and definitive. Arguably more definitive than the videos showing the death-by-chokehold of Eric Garner in New York, or the death of Tamir Rice, the 12-year-old boy in Cleveland shot by police for playing with what turned out to be a toy gun, or the unprovoked shooting of an unarmed man, Levar Jones, by a South Carolina state trooper, or the brutal beating of Rodney King that set off the Los Angeles riots in 1991 after the officers were acquitted. They are all shocking videos, and they led to various degrees of punishment—or not—for the police involved. But the Walter Scott video is the most overwhelmingly convincing of them all.

While it’s always possible for video to be misleading or confusing, Santana’s isn’t. We don’t have to wonder what’s not in the picture.

First of all, it’s long. It’s true, the video doesn’t show the very beginning, when Slager stops Scott for a broken tail-light and Scott reportedly runs into a nearby grassy field. That’s where Slager used a taser on Scott and claims that the motorist tried to wrestle it from him; the officer told authorities he “feared for his life.”

It’s at that point that Feidin Santana, a young man walking his regular route to his job at a barbershop, began recording the incident on his cell phone. As Scott runs away from him, Slager is seen firing at Scott’s back eight times until he falls to the ground. After cuffing Scott, who is possibly dead at this point, Slager goes back to pick up what appears to be the stun gun and drops it near Scott’s body, as if to frame Scott as a very dangerous man. (The video also appears to show that none of the police who soon arrived administered any life-saving measures.)

Secondly, the video is shot in the middle distance—not so far that people look like blurry dots, nor so close or narrowly framed that vital information is missing. (The too-close classic: footage of people tearing down a statue of Saddam Hussein in Baghdad after the American invasion. They looked like a passionate, American-welcoming mob—until later footage zoomed out to reveal they were a small group of people who needed help from an American military vehicle to actually take the statue down.)

Santana’s video is choppy and shaky, surely because he was nervous, but also because he was moving with the action. “I witnessed it with my eyes and let the video do the recording,” he said in one of his several MSNBC and NBC interviews. Toward the end of the video, Santana still more bravely walks closer to the officer and Scott’s body. Widely called a hero, Santana said that early on he considered erasing the video because he feared for his life. But after reading the police report that made it seem that Scott was the aggressor, Santana gave the video to the Scott family.

The worst thing about the video is that it surfaced by pure chance. “A gift from god,” the Scott family lawyer, Chris Stewart, told MSNBC’s Joy Reid. “A person happened to be in the right spot at the right time to see this incident, and be quick enough to pull out that phone and record it. And not only that, that probably happens all the time. Right now somebody is probably filming an incident that if they stepped forward it would help that person, but they’re going to keep driving or keep walking or say, ‘Oh, I don’t want to get involved,’ or feel threatened or scared.”

Walter Scott’s younger brother, Anthony, put it best. “I hate that it had to be a video to prove to take it to this level. Because we have fallen brothers all the time, and they just fall for different reasons in different parts of the country, and they’re just not investigated or taken to this level. And I think it should be looked in deeper.” He’s hoping for justice, he said, but “I won’t be satisfied till I hear a guilty verdict.”

Indeed, this video might be Fox-proof but it’s not foolproof. Nor are the increasing number of body cams and dashboard cams used by police departments throughout the country. They can absolutely help—North Charleston has them on order, and if Slager had been using one, it’s reasonable to wager that Scott would still be alive.

Cameras, however, whether wielded by bystanders or police (or with the help of apps that film and upload to YouTube with one push of a button), don’t get to the root of police corruption and systemic racism.

But video is now a matter of life and death, crime and punishment, and all too often it’s the only way that white people and white media will believe what black people have to say.