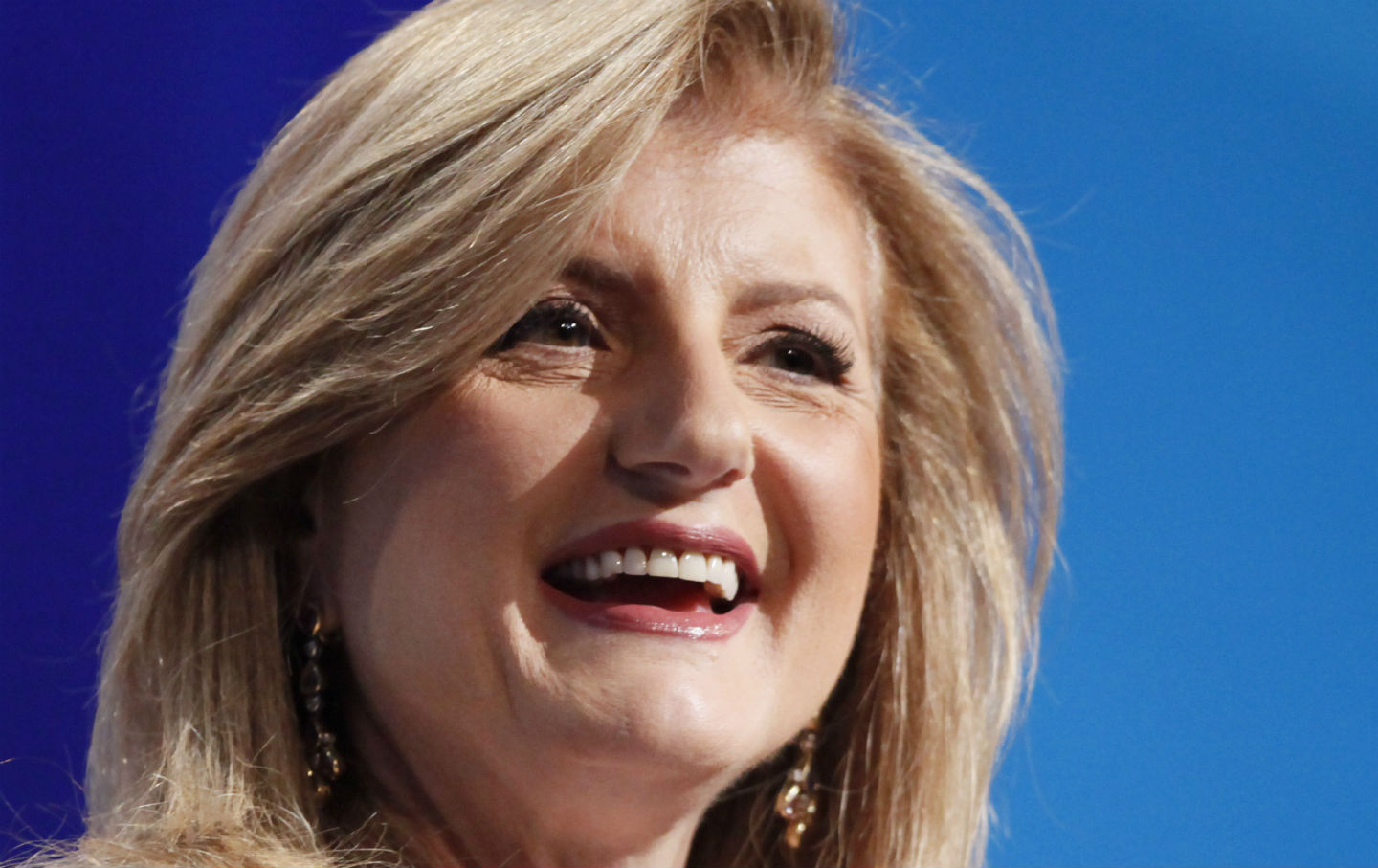 Most of the coverage of Verizon’s planned $4.4 billion acquisition of AOL—and thus of the Huffington Post and other news sites—has been almost giddy about all the moneymaking and technological possibilities. By merging with AOL, Verizon will expand by leaps and bounds into mobile video services and “programmatic ad buying,” bringing America’s largest mobile company “a new kind of energy and talent,” as one venture capitalist enthused. On its end of the pre-nup, AOL will get some much-needed cash and, still crumpled by its disastrous merger with Time-Warner in 2000, some fresh cachet.

And, whether Verizon sells HuffPost (most observers believe it will) or keeps it (AOL CEO Tim Armstrong insists, “AOL’s always going to be an owner of HuffPost”), the deal’s been deemed a win-win for Arianna Huffington. As Lloyd Grove writes, she “sold her digital media company to AOL for an eye-popping $315 million only four years ago, [and] has once again fallen into a giant tub of butter.”

But there hasn’t been nearly as much talk about what this means for the content—you know, the journalism. When a telecom giant at the center of every poli-techno controversy, from net neutrality to NSA spying, owns and is expected to invest millions in one of the world’s most-read news sites, what happens to editorial independence?

Verizon, after all, has its own dedicated page at HuffPost, much of which covers the telecom’s ongoing effort to strangle net neutrality. (Both HuffPost and AOL have been outspoken champions for keeping the web’s playing field level.) And even though the FCC has ruled in favor of the regulations for now, corporate lobbying continues. “Verizon and other major telecom companies have plans to challenge the regs,” Clark Mindock writes at Open Secrets, “But whether or not AOL changes its stance on net neutrality, the fact is that the biggest opponent of net neutrality rules is about to acquire one of the biggest proponents.… And AOL’s D.C. money presence is a drop in the bucket compared to Verizon’s.”

And how free would HuffPost be in the future to report on Verizon’s and other telecom’s involvement in government surveillance of Americans’ phone records? Or on Verizon’s support of the rightwing, Koch-backed policy-maker, the American Legislative Exchange Council (ALEC)? Just days before the Verizon/AOL deal was announced, HuffPost ran a post headlined: “Telecom Sleaze: ALEC and Its Communication’s Funders—AT&T, Verizon, CenturyLink, Comcast and Time Warner Cable.” I’m just guessing, but that could be the last time we see HuffPost casually refer to Verizon as “sleaze.”

Let’s say Verizon does eventually spin off HuffPost (the most likely buyer now is German conglomerate Axel Springer, according to Re/code’s Kara Swisher); the initial Verizon/AOL merger is pending regulatory approval and is many months away. In the interim, will HuffPost tread anymore lightly on Verizon-volatile issues?

For its part, Verizon says it won’t pressure AOL or its properties. A company spokesman told Open Secrets that editorial independence has been discussed and that AOL’s Armstrong is expected to “continue to manage the media properties the way he does today.”

But based on Verizon’s one foray into news, its record on censorship looks dismal. Last fall, when Verizon Wireless started the short-lived tech-news site SugarString, the new editor e-mailed potential writers that “two verboten topics” are “spying and net neutrality.”

Verizon objected to this characterization, saying, “SugarString is open to all topics that fit its mission and elevate the conversation around technology.” But, as the Daily Dot points out, “The company did not clarify the details of ‘its mission.’”

You can feel the fear of Verizon mission creep at the tech news site Engadget. It and TechCrunch are two of the more prominent AOL properties that could soon be Verizon’s. When the acquisition was announced Tuesday, Engadget editor Terrence O’Brien tweeted:

Nothing like waking up to find out you have new corporate overlords.

To be clear: This changes nothing editorially at @Engadget. We’ll continue to cover Verizon, net neutrality, etc… the way we always have.

A lot of shit talking going on today. @Engadget is run by humans. Humans with integrity and ethics. Nothing’s changing as long as we’re here

By contrast, the response on the editorial side of HuffPost seems, at least on the surface, positively sanguine. “Way too soon to tell, but I’m not worried at all, don’t think this is a story,” one reporter there e-mailed me.

A staff writer (who, like most I contacted, asked to be quoted off the record), e-mailed that he doesn’t know enough to say “What It All Means. But I rather think that the fact that we published this story (http://www.huffingtonpost.com/2015/05/12/verizon-sprint-fcc_n_7267022.html) soon after news of the deal broke speaks for itself, as does the fact that we very doggedly pursued the story of Tim Armstrong’s decision to alter AOL employee 401(K) plans.”

Why the calm? As another staffer explained to me, whether Verizon keeps or spins off HuffPost, “Either way we’re going to get a lot of money to do what we want, which is analogous to what happened when AOL bought us, only amplified: more editors, big-name hires…and the opportunity to rev the engines a little bit. If Verizon holds on to us, that can be done exponentially. I’m not talking like a corporate cheerleader, I’m just talking objectively.”

Indeed, Lloyd Grove estimates that if Verizon retains HuffPost, there could be “an infusion of a couple of hundred million dollars, which would be good because AOL couldn’t invest anything because they were basically out of cash.”

AOL CEO Armstrong is certainly bullish on HuffPost. He says his goal is to make the site “the largest single media brand in the world,” and he’s already talking about how “the deal may mean better wages and benefits for AOL employees.”

Employees is a key word. When AOL bought the Huffington Post for $315 million, Arianna Huffington didn’t pass a cent onto the thousands of freelance writers who blog for the site for free—as in unpaid, gratis, pro bono. Getting “exposure” was its own paycheck. And regardless of how any Verizon windfall is spent, it’s as unlikely that she’ll start paying bloggers as it is that the politically committed telecom will start giving its journalists 100 percent, total, no-holds-barred editorial freedom. That’s a word for nothing left to lose.