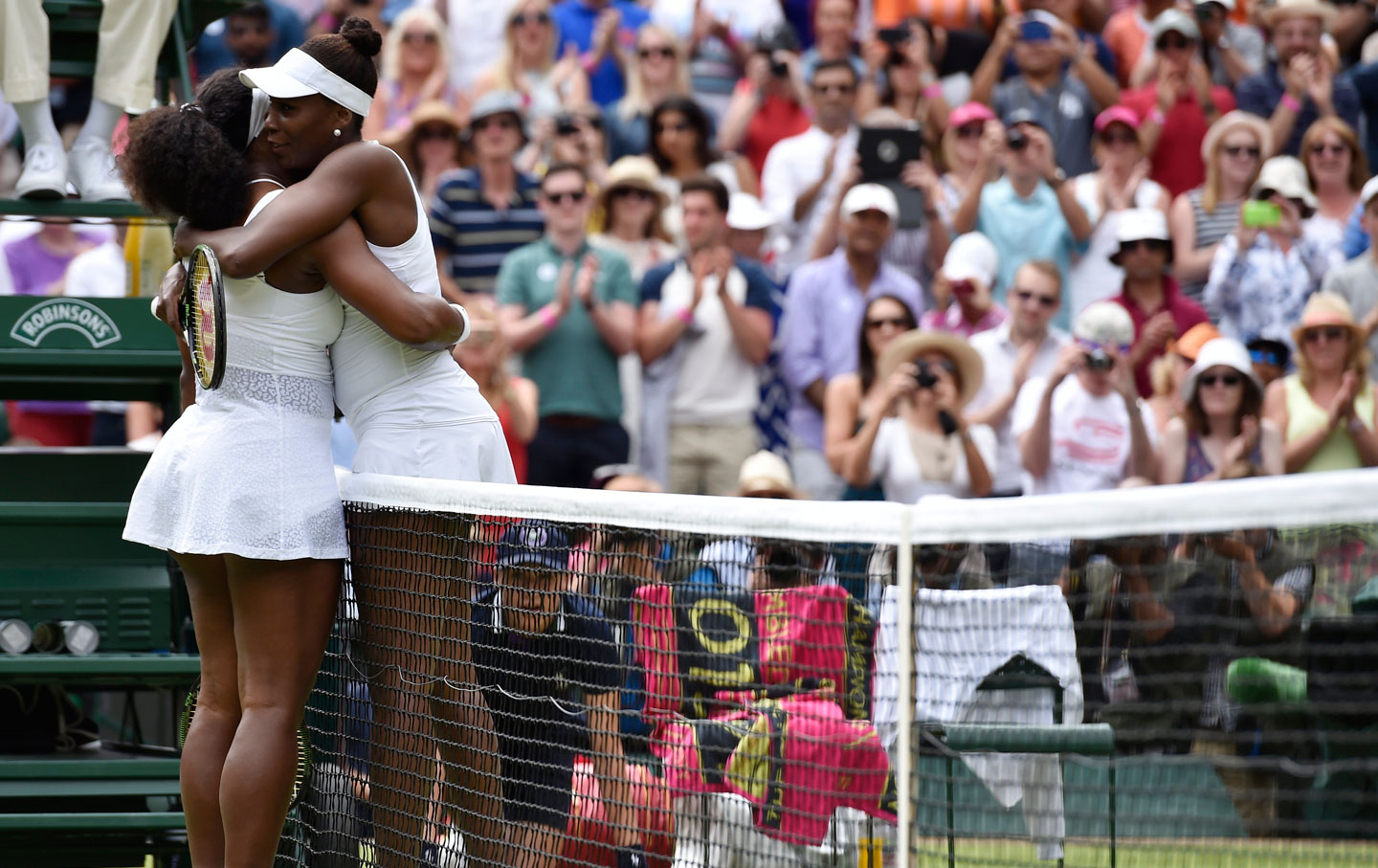 Serena and Venus Williams hug after winning their match at the Wimbledon Tennis Championships in London, July 6, 2015. (Reuters/Toby Melville)

Unless you are an only child or an Osmond, you can relate to sibling conflict. Yet, tragically, the sports world has been historically stingy with face-to-face sibling battles with which we can vicariously indulge our own petty grievances. That is why the stakes when Venus and Serena Williams go head to head always seem so high. The fact that for two decades it has often seemed like “The Williams Family Vs. The World” (otherwise known as “The Williams Sisters Vs. The Uptight, Country Club, at Times Racist World of Tennis,”) makes their head-to-head match-ups somehow both unmissable and unendurable. Part of us doesn’t want to see it, but we also cannot look away. There is a reason their mother, Oracene, often does not attend their contests.

The US Open quarterfinal contest, to be played Tuesday night, is no exception. Serena Williams has had a season for the ages, going 52-2 in 2015 and attempting to secure the first grand slam in women’s tennis since 1988. She is also playing for something many of us think she’s already achieved, the ephemeral title-by-consensus Greatest Of All Time (GOAT). Her dominance has been so towering, so Jordan-esque, that Venus is being seen by many as an emotional speed bump on Serena’s road to immortality. As commentator Pam Shriver said, “The only thing more interesting would be for Serena have to go through her in a final. But quarterfinal? I’ll take it. It had to be.” In other words, as dramatic as the match might be, the assumption is that Venus is the obstacle, and not vice versa. The smart money is still on Serena, but, even though she would never overlook her big sister, the rest of us do so at our own peril.

Venus Williams is 35 years old. Over the last decade she has battled a series of injuries that have made a serious dent in the number of grand-slam titles and honors she would have otherwise accrued. Since 2011, she has suffered from an autoimmune disease called Sjogren’s Syndrome, which she controls with constant monitoring, rest, medication, and a vegan diet. Yet this season Venus is 24-10. Serena may be playing for a grand slam, but Venus is playing for her first US Open singles championship since 2001. If she wins, the 14-year gap between titles would be a record and a testament to her ability to endure physical pain and a constant rehab regimen, fighting a disease that leaks the strength from her body

People who don’t think Venus can do it should look back on one of the last times the two sisters played. It was the semifinals of the Rogers Cup in Montreal, which took place just over a year ago. Going into this match, Serena had won six straight times, flipping her record against big sister from nine wins against 10 losses to 15-10. Yet this time it was Venus who beat Serena in three scorching sets, 6-7, 6-2, 6-3. Serena looked frustrated by a combination of unforced errors and Venus’s ability to break her serve with rocket baseline returns and a net game that, over the three decades (!) they have played one another, has given Serena fits. Venus, the one with the autoimmune disease, also seemed to gain strength as the match wore on.

Another intangible reason to take Venus seriously is age. Not the sisters’ actual ages but their athletic ages. Serena, and it is remarkable to even say this in a tennis context, is a young 33. If she chooses to keep going, she has several more years of dominating tennis in front of her. Venus is an old 35. This may very well be her last best shot at a major title. People should expect her to either be victorious or go out on her shield, with no in between.

Once again, it would be foolish to say anything other than the odds are with Serena Williams. Yet this match is no formality. Serena might be playing for history, but Venus will be playing to put a stamp on her own groundbreaking, Hall of Fame career. Do not be surprised if Venus gives us something we will be talking about for decades to come.