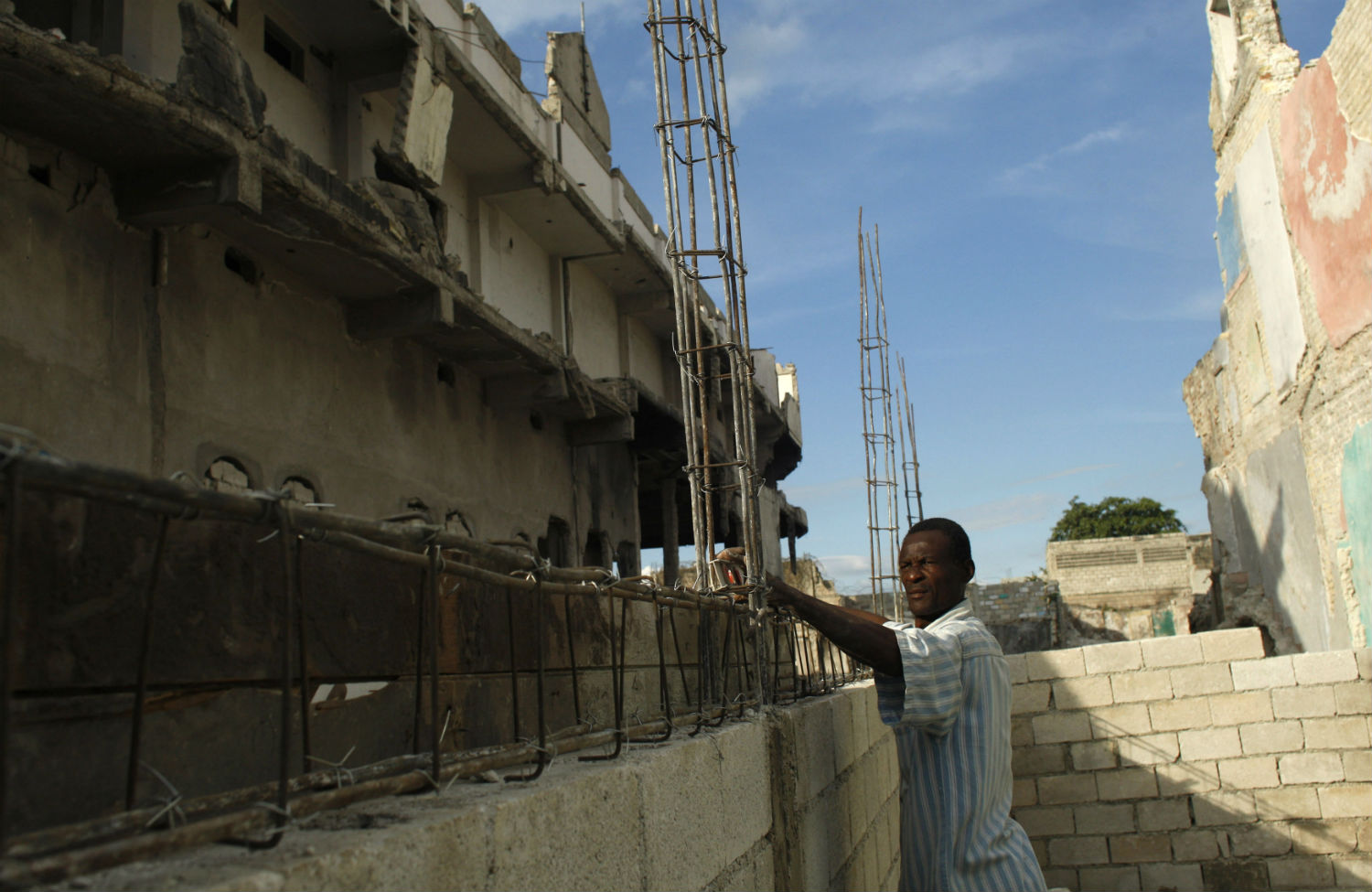 A Haitian man works on constructing a house next to a building destroyed by the 2010 earthquake. (Reuters/Eduardo Munoz)

The corrugated metal fences surrounding construction sites in downtown Port-au-Prince are covered with a simple message: “Haiti ap vanse,” or “Haiti is moving forward.” Where once many thousands of people made tattered tents and makeshift shelters their home, now massive concrete shells and cranes stand tall amidst the rubble. Returning to Haiti, along with much of the world’s major media, for the fifth anniversary of the earthquake that killed more than 200,000 and displaced 1.5 million, it’s impossible not to see some signs that Haiti is in fact “moving forward.” The large camps of internally displaced persons, the most visible sign of the quake’s lasting impact, have for the most part been cleared, though certainly some remain. But beneath the veneer of progress, a more disturbing reality is apparent.

Eighteen kilometers north on the dusty hillsides overlooking the sea is Canaan, an informal city now home to hundreds of thousands of people and, according to the State Department, on its way to becoming the second-largest city in Haiti. “It’s a living hell,” says Alexis, one of the area’s residents, as we sit overlooking a new $18 million sports complex built by the Olympic Committee for Haitian national teams at the foot of the hills. “I’ll stay here because I can’t afford to go anywhere else,” she adds. Like many others here, Alexis received rental support from an NGO to move out of the camps in Haiti’s capital, but when it ran out, she was displaced all over again. While no longer facing the constant threat of eviction, Alexis faces a new set of problems: there are no government services in Canaan, water is scarce, employment even more so.

Five years ago, it took just seconds for hundreds of thousands of homes to crumble and crack. More than a million Haitians took to the streets, sleeping under the stars wherever space allowed, taking comfort that the only thing that could still fall was the sky. Almost just as quickly, the global aid-industrial complex was set in motion; the first no-bid contracts for groups responding to the crisis were awarded just days after. In a few months, the international community would come together, pledging $10 billion in relief and promising that this time would be different. No more of the failed policies of the past, in which the flow of foreign aid undermined the Haitian government; this time Haiti would “build back better.” But after five years and billions of dollars, just 9,000 new homes have been built.

And so, the big question five years later remains: “Where did the money go?” The funds pledged were enough to hand every single Haitian a check for $1,000. Yet compared to the lofty expectations, the internationally led reconstruction process has been a failure. To answer the question, you have to forget the notion that foreign aid is simply an altruistic endeavor to better the lives of those in need.

The United States Agency for International Development (USAID), which has spent more than $1.5 billion in Haiti, explains its goal as “furthering America’s interests.” In a more candid assessment, contained in a document now over a decade old and no longer publicly available, USAID explained that “the principal beneficiary of America’s foreign assistance programs has always been the United States.” Evidence from Haiti backs this up. For every $1 that USAID has spent, less than one penny went directly to Haitian organizations, be it the Haitian government or in Haiti’s private sector. More than 50 cents went to Beltway firms—handling everything from housing construction, rubble removal, health services, security and more—located in DC, Maryland and Virginia. As a jobs creator back home, USAID’s Haiti reconstruction effort has been an astounding success. The single largest recipient of USAID funding in Haiti was a for-profit, DC-based firm, Chemonics International, through USAID’s Office of Transition Initiatives. In an earlier contract with Chemonics released through Freedom of Information Act requests, USAID clearly explained: “While humanitarian aid is distributed on the basis of need alone, transition assistance is allocated with an eye to advancing U.S. foreign policy objectives and priorities.”

A relevant example of just that philosophy is that the vast majority of USAID-financed houses were built many hours north of Port-au-Prince, where the need is greatest, in Caracol, the site of a shiny, new industrial park, which received high-level support from Bill and Hillary Clinton. And while the plan had been to build 15,000 houses, only 900 currently have been built. At the same time, a reliance on foreign contractors and imported materials led costs to balloon from $55 million to over $90 million. In October 2014, barely a year after the first families moved in to homes in Caracol, USAID awarded $4.5 million to yet another American firm to oversee massive repairs needed to fix the faulty work of the first contractor. This is the damage caused by putting political priorities and American business interests over the needs of those on the ground.

But Chemonics, whose contract with USAID explicitly states that decisions about what programs to fund “will be based upon US foreign policy interests in consultation” with the State Department, worked to further USAID’s objectives of “counter[ing] the destabilizing effects” and the “growing discontent” with the pace of reconstruction. It ran PR for the new industrial park, installing benches and flower planters in nearby areas to “project a positive image.” An audit later noted that the flowers soon died “from lack of care,” while the mayor decried the lack of community involvement. But business was good for Chemonics, whose CEO at the time received a $2.5 million bonus.

If you try to dig deeper into how USAID money is actually spent, you’ll find a black box. While it is relatively easy to look up online how much money Chemonics has received for work in Haiti since the quake (over $200 million), it is impossible to identify the thousands of subcontractors that actually implement the various programs USAID supports. Interested in how much money contractors are able to take off the top for their headquarters back home? Too bad—that information is a tightly protected trade secret that USAID and its contractors refuse to disclose.

When I submitted a FOIA request for more specific information about Chemonics’s work in Haiti, every document I received was heavily redacted. USAID explained that to “release the information…could willfully stir up false allegations…and cause strife within the target communities,” adding, “the release of the information…would likely instigate demonstrations and create an unsafe environment” to work in.

The international aid effort in Haiti has been plagued from the beginning by a lack of transparency and a lack of community participation. A reliance on opaque NGOs and unaccountable contractors has shielded programs from scrutiny. Decisions are expressly guided not solely by the needs on the ground but by powerful actors in Washington, New York and elsewhere. But this isn’t a mistake, it’s the system we’ve created, and it’s time to change it.