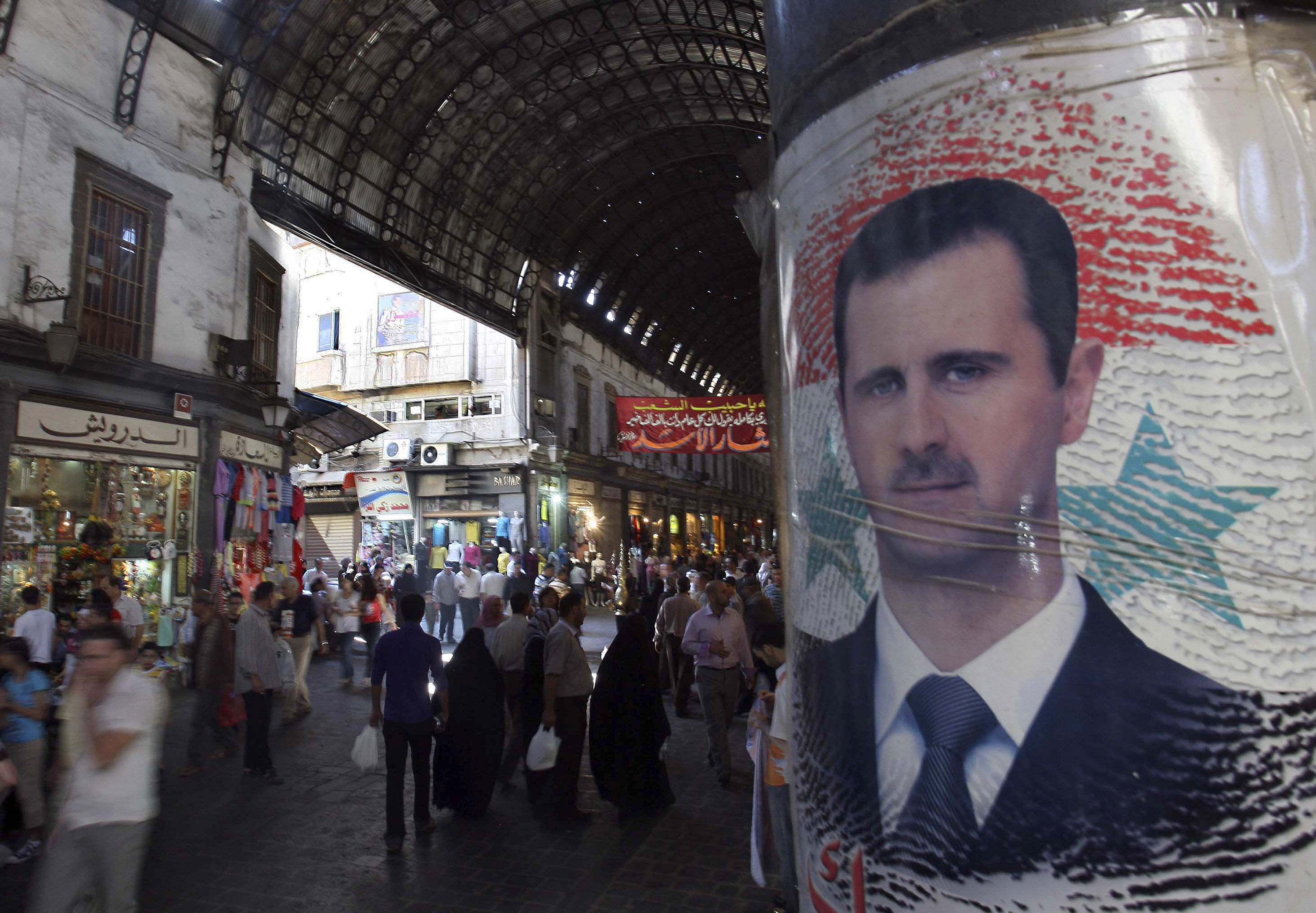 One key to solving the ISIS crisis is hunkered down in the presidential palace in Damascus, and his name is Bashar al-Assad. Demonized by the United States and by neoconservatives long before he waged a ruthless, take-no-prisoners blitzkrieg against the American- and Saudi-supported rebellion that began in 2011, Assad has proved to everyone (with the possible exception of Secretary of State John Kerry) that he’s staying put, at least for the foreseeable future. For all intents and purposes, Assad has won the civil war in Syria, and short of an Iraq-style invasion—which isn’t in the cards—there’s no way for the United States to oust Assad. Which is a good thing, because his ouster would immeasurably strengthen the extremists who’ve led the fight against him, including the Islamic State in Iraq and Syria, now “the Islamic State,” the Caliphate-mongering radicals who are an Al Qaeda offshoot. On the other hand, by ending its support for the Syrian rebels, who don’t have a prayer anyway, the United States would strengthen Assad and allow him to crush ISIS.

It’s gradually dawning on America’s foreign policy establishment that Assad isn’t going anywhere. Back in December, a foresighted Ryan Crocker—no weenie, having served as US ambassador to Iraq and Afghanistan during the wars—suggested that the United States ought to accept that Assad has won. In a December 21 New York Times op-ed, Crocker wrote:

It is time to consider a future for Syria without Assad’s ouster, because it is overwhelmingly likely that is what the future will be.… Better armed, organized, supported and motivated, Assad isn’t going. Most likely, he will get the country back, inch by bloody inch. Perhaps Al Qaeda will hold a few enclaves in the north. But he will hold Damascus. And do we really want the alternative—a major country at the heart of the Arab world in the hands of Al Qaeda? So we need to come to terms with a future that includes Assad—and consider that as bad as he is, there is something worse. A good place to start is Geneva next month and some quiet engagement with Syrian officials.

Assad, who’s wrongly been accused of covertly supporting ISIS, last week joined the war against ISIS in Iraq officially, sending his air force into Iraq—with the support of Prime Minister Nouri al-Maliki’s government—to bomb ISIS positions near the Syria-Iraq border. Taking note of that, Leslie Gelb—another US foreign policy graybeard—opined that the United States ought to ally itself with Assad’s potent forces:

The second step of this strategy is to set President Bashar al-Assad of Syria against the jihadis in Iraq, an offensive he started on his own with airstrikes last week. This would acknowledge the reality of Iraq and Syria as one strategic, anti-jihadi battlefield. But instead of capitalizing on Mr. Assad’s anti-jihadi instincts, the Obama team now proposes to do what it has resisted doing for almost three years—to send hundreds of millions of dollars in arms aid for the Sunni rebels battling the Assad government. This move has American priorities backward. It will turn Mr. Assad away from the jihadis in Iraq, and back to fighting American-backed rebels in Syria.

From the start, President Obama’s wrongheaded support for the anti-Assad revolt is what led directly to ISIS’ resurgence. By calling for Assad’s ouster in 2011 and 2012, by green-lighting Saudi and Turkish aid to the rebels, by ordering the CIA to train anti-Assad forces in Jordan, by drawing red lines that he couldn’t enforce, and by supplying those ragtag rebels, Obama unleashed hellish forces in Syria that neither he nor his Saudi and Turkish partners could control. Unspeakable atrocities have been committed on both sides, and it’s obvious that Assad is no friend of humanity. But he’s there, and he’s better than ISIS.

According to Josh Rogin of The Daily Beast, there’s an actual debate going on inside the White House and the State Department over whether to call it quits in Syria. Writes Rogin:

There’s a battle raging inside the Obama administration about whether the United States ought to push away from its goal of toppling Syrian dictator Bashar al-Assad and into a de facto alliance with the Damascus regime to fight ISIS and other Sunni extremists in the region.… The 3 1/2-year grinding civil war is Syria has been put on a back burner for now. Some officials inside the administration are proposing that the drive to remove Assad from power, which Obama announced as U.S. policy in 2012, be set aside, too. The focus, these officials argue, should instead be on the region’s security and stability. Governments fighting for survival against extremists should be shored up, not undermined.

Some analysts suggest that there’s an emerging “Shiite crescent” or a Tehran-Baghdad-Damascus “axis,” but that way too simplistic. True, in battling ISIS, all three governments ought to be seen as potential partners of the United States. But Assad, while an ally of Iran’s, isn’t an Iranian stooge, and he’s not really even a Shiite. And, whatever the eventual outcome of the civil war in Iraq, it won’t eliminate the Sunnis there, who will continue to press their claims for a share of power in Baghdad, with the support of the Arab heartland. And Iran has no imperial interest in the Arab world. It’s interest in Iraq is to prevent the emergence of a threat to Iran, and it’s interest in Syria and in Lebanon’s Hezbollah is mostly as leverage against Israel and its continued threats to bomb Iran over its nuclear program. So the solution in the Syria-Iraq civil war is political and diplomatic, not military. And it starts with an entente between Iran and Saudi Arabia, both of which are alarmed by ISIS’ recent gains, and both of which can vastly influence their proxies in Syria and Iraq.