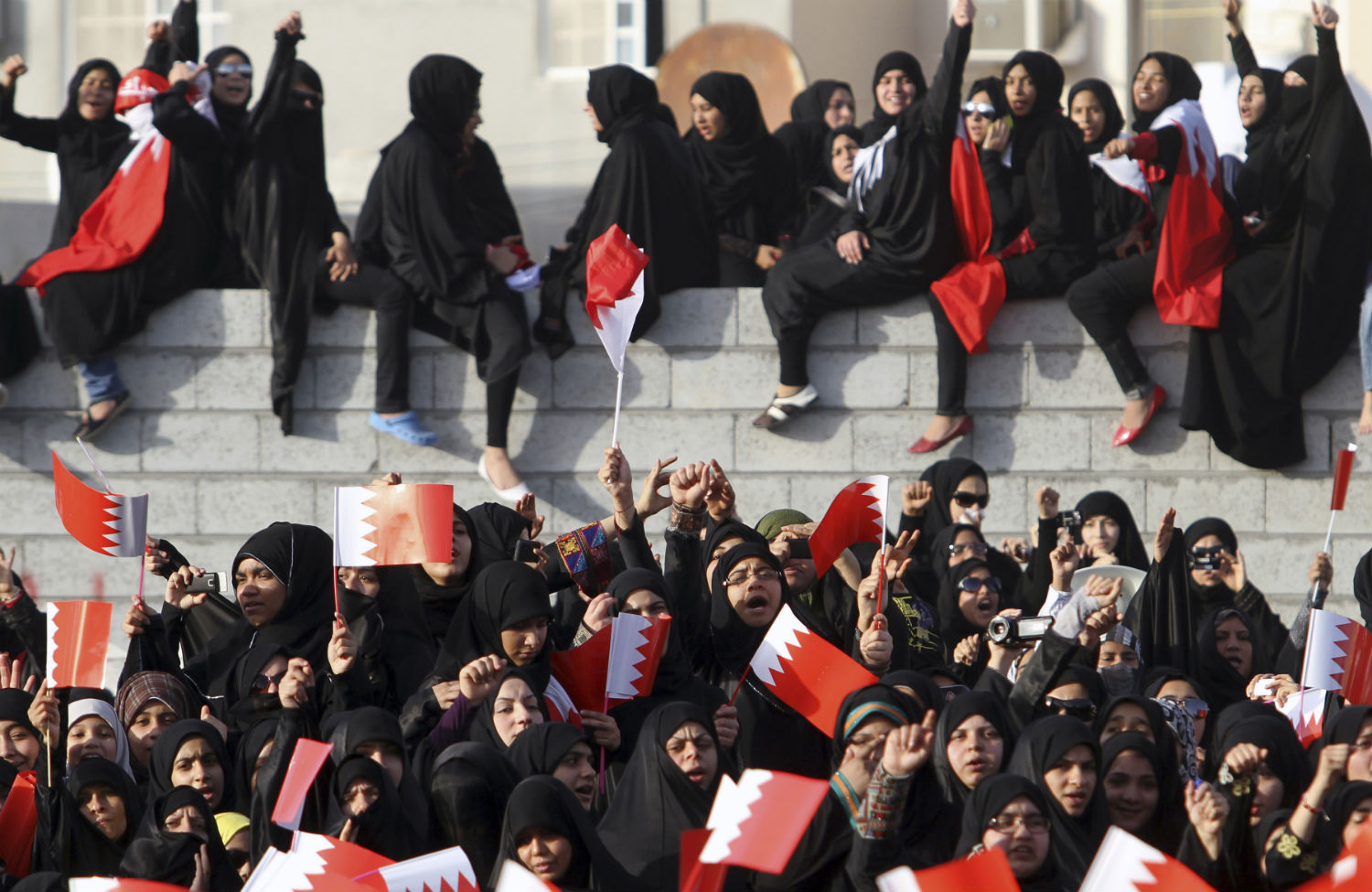 Bahraini women take part in an anti-government rally in the village of Sitra, east of Manama, June 17, 2011. (Reuters/Hamad I Mohammed)

This article is a joint publication of TheNation.com and Foreign Policy In Focus. It was originally distributed by OtherWords.

Secretary of Defense Chuck Hagel was full of tough talk when he visited the island kingdom of Bahrain in early December.

The United States, he vowed, will continue to guard “the free flow of energy and commerce” from the Persian Gulf and keep Iran nuclear-free, through the presence of 35,000 US military personnel or the (as-yet-unproven) regional missile defense system.

Hagel also trumpeted the American commitment to “political reform” in the gulf region. But the Pentagon chief uttered not a word about the hundreds of Bahrainis languishing in prison—many without adequate medical care—for demanding the very rights he says they deserve. Bahrainis have engaged in nearly daily demonstrations against the Al Khalifa monarchy for the past three years. This resistance started on Valentine’s Day, 2011, when thousands gathered at the Pearl Roundabout in the capital city, Manama, to demand free and fair elections, real power for the popularly elected lower house of Parliament, the release of political prisoners and an end to government corruption.

From the beginning, the monarchy has sought to suppress this activism with home raids, torture, show trials and lengthy prison sentences. At least three dozen people have been killed, including four who died while in police custody. No one has been held accountable for the deaths.

Another thirty-four people—including three children under the age of 10—are suspected to have died from exposure to tear gas or from being struck in the head by tear gas canisters. The group Physicians for Human Rights accuses the government of “weaponizing” tear gas by firing canisters into homes and cars and in “unprecedented” amounts, especially in Shiite villages, where it has become a virtual fog.

Last summer, the government banned all public gatherings in Manama and expanded the state’s powers to combat “terrorism.” Emergency laws have criminalized speech critical of the government and, in an Orwellian twist, even criticism of the government’s definition of terrorism. Khalil al-Marzooq, a leader in the prominent opposition party al-Wifaq, was arrested in September for describing the February 14 Youth Coalition as a peaceful opposition group.

Bahrain’s government accuses the coalition of fomenting violent revolution against the monarchy. Fifty people have been convicted of terror-related crimes, with sentences between five and fifteen years in prison, for their affiliation with the group.

The Obama administration did ban the sale of US-made tear gas canisters to Bahrain. Otherwise, its protests of the crackdown have been meek. Following al-Marzooq’s arrest, the State Department expressed “concern” but did not demand his release.

The diffident murmurs are all the more disappointing given that Bahrain’s crisis plays out in the shadow of the US Navy’s Fifth Fleet, which has been headquartered in Manama since 1995. In addition to a five-year, $580 million project to improve the naval port, Washington has sold more than $1 billion worth of weapons to Bahrain since 2000. After a temporary hold in 2012, the arms transfers resumed.

Meanwhile, demonstrations for political rights and an end to emergency law continue across the country. The smell of burning tires mixed with tear gas is part of everyday life. As the conflict drags on, tensions between the largely pro-government Sunni minority and the Shiite majority are further segregating Bahraini society.

All the evidence points to the monarchy’s hostility to “political reform,” yet the Obama administration continues to back the Al Khalifa regime so as to defeat “coercion and aggression” in the region.

Hagel got one thing right in his speech in Manama when he said: “Diplomacy takes courage. It takes vision.”

Hagel may find it hard to see through the tear gas, but US diplomacy has been anything but tough when it comes to encouraging reform in Bahrain.