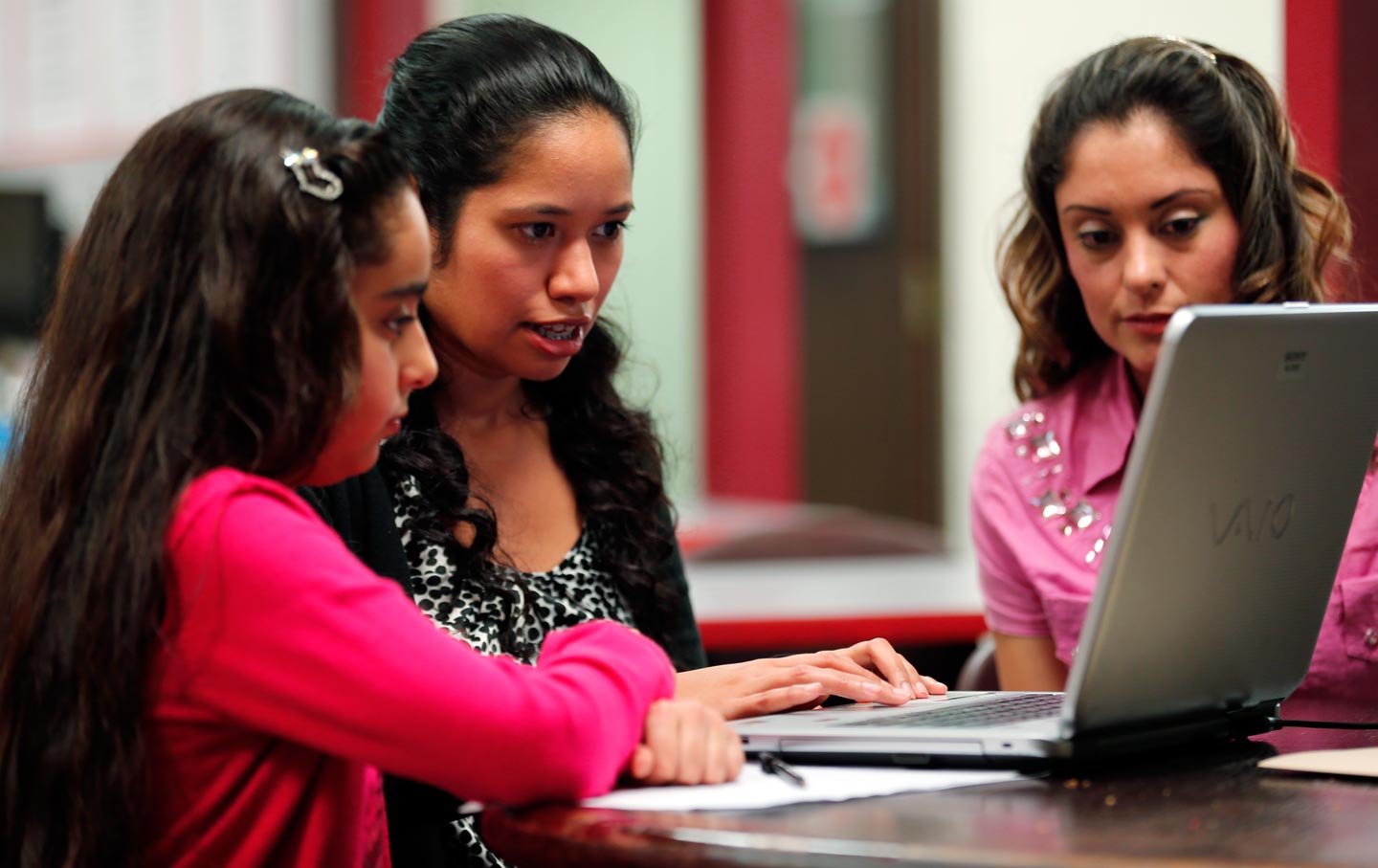 Charter schools often tout their “innovation,” the enterprising spirit they bring to public education. Can they also spur unions to innovate?

A new organizing victory at a controversial “cyberschool” offers lessons on how the labor movement fits in the brave new world of “virtual classrooms.” Hundreds of teachers at Agora Cyber Charter school voted overwhelmingly to join the Pennsylvania State Education Association (PSEA) in May. The social workers and family coaches are also in the process of a union election, following the unionization of staff counselors.

One of Pennsylvania’s largest charters, with some 8,500 online students, Agora has for years been wracked by mismanagement and instability. Unionization is giving the teachers, who work remotely through digital networks, a collective voice in a virtual workplace.

Unions are rare in charter schools, which are generally publicly funded but run by for-profit firms with a start-up mentality that is unfriendly to labor. In addition to breaking new ground by organizing Agora teachers and support staff, teachers at Pennsylvania Cyber Charter School and Young Scholars of Central Pennsylvania Charter School have also unionized with PSEA.

For science teacher Melissa Hoffman-Long, who worked with the early organizing committees, what initially drove teachers to organize was a realization among staff that, while charters touted “cutting edge” programs, there was “incongruity between the for-profit business model and the public mission of a school…. We felt like having a union would help balance out and give the staff a united voice when shady things started going down.”

Pennsylvania’s 14 cyber charters are notorious underachievers, long criticized for lacking public oversight, producing abysmal standardized test scores and maintaining lax grading standards and chronically poor student attendance in virtual classes. On the state’s annual School Performance Profile, Agora has scored below 50 points, out of a passing grade of 70, for the past three years.

Agora attempted to start with a clean slate under a five-year operating contract with the state Education Department in October 2014, shedding its original corporate management firm, K12—a charter giant that has been accused of chronically mismanaging online-based schools in California.

But Agora’s transition to self-management has been “a crazy ride,” Hoffman-Long says, and the union offers a refreshing anchor of stability. The school has cycled through several different administrators over the past year. The current administrator, Michael Conti, came to Agora from Pennsylvania Cyber Charter School, which faced scrutiny of its finances following fraud charges against its beleaguered founder. And despite leaving K12’s management, Agora has returned to using K12’s curriculum. In February, chaos erupted again with the sudden layoff of about 100 teachers. The school has since come under government scrutiny over its tumultuous operations. While its records are under review by education authorities, Agora has defended ongoing reform efforts. A spokesperson stated via e-mail that the administration was “focused on moving forward, planning for the future, and doing what is in the best interest for the students who chose cyber education.”

Various experts have investigated Agora and other cyber charters and prescribed various fixes, ranging from basing funding on academic performance to simply abolishing the charter sector’s for-profit operating scheme and opting instead for full state control. One element often absent from the policy debate, however, is the role of labor. The few unionized charter schools have been organized in response to the same pedagogical and economic concerns driving public criticisms of charters. As online education expands as part of the K12 educational landscape, unions, which are designed to strengthen both educational quality and accountability across a school community, could be a powerful civic voice in a sector prone to corporatization and corruption.

Hoffman-Long notes that the teachers had tried previously to organize under K12, but it was only under self-management under the state Education Department that they finally secured a majority vote, driven in part by a realization that the struggle for a fair contract was bigger than any particular administrator: “One of the things we kept trying to explain to people was, the beauty of a union is that it doesn’t matter who stays in charge—that stays stable.” The teachers are now hoping to negotiate a contract ensuring that educators have meaningful control over the curriculum and more transparency around the school’s pay structure, along with job security to protect against future managerial turmoil.

Labor law is shifting its attitude toward charter schools as well. After many years of operating in the gray area between public and private, charter schools were deemed to be private government contractors—and thereby private employers—in two recent National Labor Relations Board decisions involving union drives at Pennsylvania Virtual Charter School and the Brooklyn-based Hyde Leadership Charter School. While there are many solid arguments for regulating charters as public institutions, when it comes to labor, teachers deserve the right to organize under state labor law, like regular public schools, or under the National Labor Relations Act governing employees of private enterprises.

Still, securing a union contract is just one step toward developing their school into a fairer workplace. Hoffman-Long concedes that “charter schools are the stepchild of the world of education,” and much of the negative press and criticism are well founded. But as online education becomes more mainstream, she adds, “that makes it even more crucial that they’re managed in an ethical manner, and that the services that they’re providing are solid and that the technology works.” Now that Agora teachers are organized, she adds, “I do think that virtual education is an opportunity for us to develop…. moving forward with a unionized environment in the virtual setting, there’s a lot of potential to see growth in the model in a positive way.”

Ironically, something considered a relic of a bygone economic era today, unionization, is well-suited to help educators come to grips with the new technological vanguard. While both the state and corporate institutions have foundered in virtual schooling, teachers have been a consistent voice for treating school less as a business and more as a public trust. The question is how much trust, and power, they have to advocate for themselves and their students at work.

Editor’s note: This article has been updated to clarify that scrutiny of Pennsylvania Cyber Charter School began prior to Michael Conti assuming the CEO position. Conti was promoted to CEO of Pennsylvania Cyber Charter School after the school’s founder, Nick Trombetta, stepped down in 2012. Trombetta ultimately plead guilty to charges of tax conspiracy earlier this year.