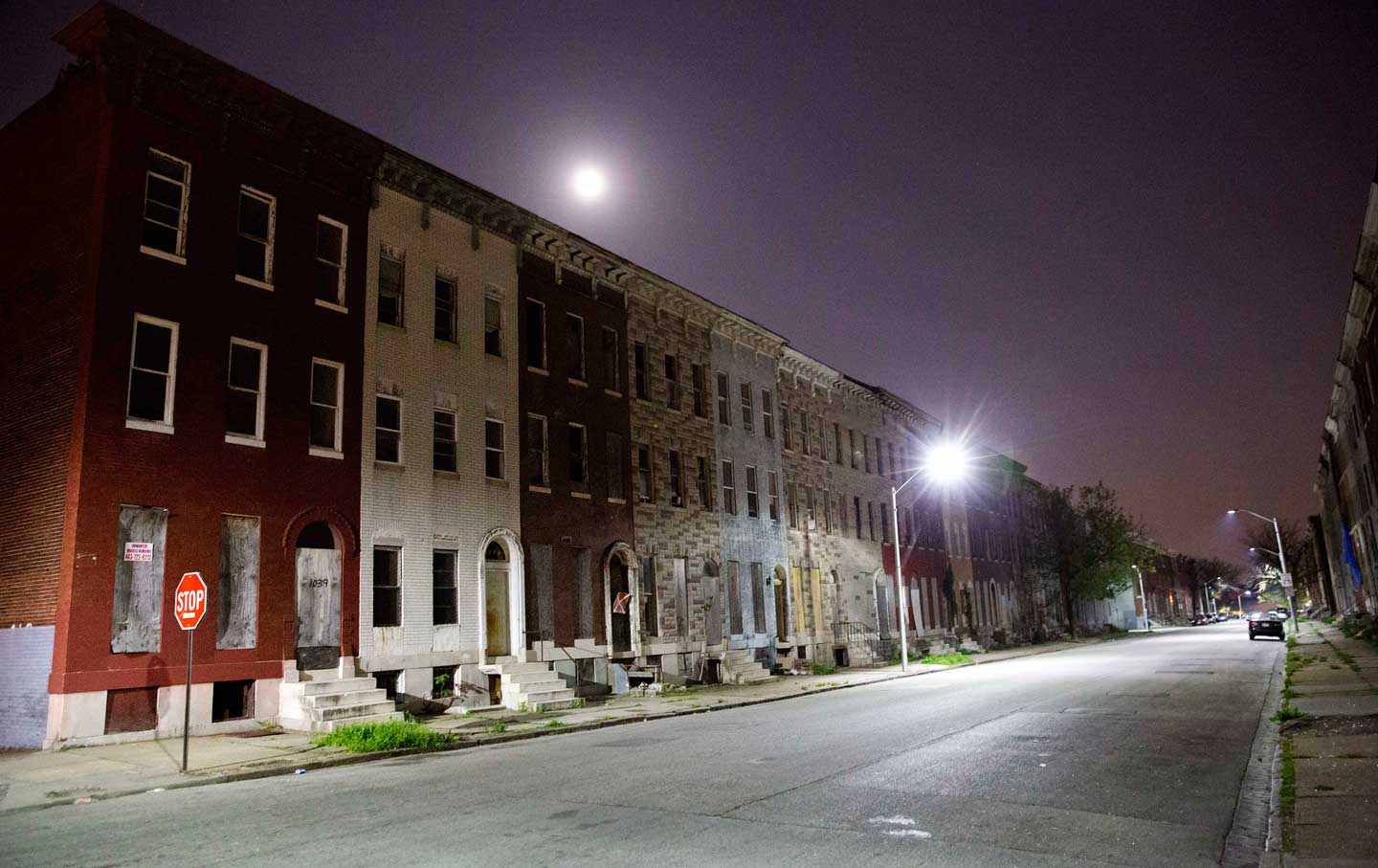 The moon rises above a block of blighted row houses in the neighborhood where Freddie Gray was arrested in Baltimore. (AP Photo / David Goldman)

Last year, the death of Freddie Gray in police custody placed his neighborhood in a tragic spotlight, highlighting an all-too common urban misery: epidemic poverty, blighted lots, and shattered homes. Gray’s Baltimore has become notorious as the site of failed “urban renewal” projects, rife with liberal talking points but showing precious little progress in alleviating poverty and joblessness. There’s now a plan to generate change from the inside out, creating community housing as a source of collective healing.

Facing a change in administration in pending elections, activists are pushing a plan before the City Council to devote about $40 million to housing development, not just to fix up vacancies or construct commercial towers but to overhaul neighborhoods through developing Community Land Trusts. As we’ve reported before, the idea would be to establish communally owned property under a democratic governance structure, which allows residents and the surrounding neighborhood to cooperatively manage land and property use.

Through years of gentrification and deindustrialization, the housing market has polarized. Millions of low-income units have vanished, often swallowed by predatory developers. Meanwhile, more than 66,500 households are constantly at risk of eviction due to non-payment. According to the Roundtable’s research published in January, “approximately one-third of Baltimore households were homeless or at risk of homelessness.” Amid eroding tax bases and impoverished schools, political malaise exacerbates urban depression, the Roundtable reports: “Baltimore City officials have offered no housing plan or community development plan that is responsive to those most in need, the poor working class or fixed income families” in the lowest income bracket, particularly in recession-battered black communities.

Under the CLT’s cooperative ownership structure, the resident owns the property, while the community retains the land. The resident pays an annual leasing fee, plus other mortgage and maintenance expenses. When the property is sold, price is controlled through a prearranged agreement with a community authority, with representation from neighbors and “public stakeholders” such as local officials or community-development organizations. The homeowner can share in any appreciation of the sales value.

When these community controls are leveraged against market forces, neighborhoods can ensure a communally managed recycling of ownership, and avoid the frenzied churn of renters and developers commonly associated with boom-bust speculation and gentrification.

The model could also be applied to commercial properties, including self-sustaining small businesses in struggling neighborhoods. Or it could help establish community space, as East Baltimore’s Amazing Grace Lutheran Church has already done by stewarding a recreational green space known as the “sacred commons.”

The CLT advocates seek two tranches of $20 million each, one to raze and dismantle neglected vacant properties (providing an estimated 650 living-wage jobs for local residents), and another $20 million for long-term investment in building and implementing different communities’ homegrown CLT plans.

Todd Cherkis of the community-labor group United Workers says the Roundtable is developing an array of potential projects, including rental or owner-occupied property; some possible projects are already underway but lack the private funding to go large-scale. One possibility might be enhancing a housing project for youth at risk of homelessness; another would create a solar-farm project in Curtis Bay, which activists have framed as a green alternative-development plan for an area previously flagged as a potential site for new polluting incinerator. “Residents and leaders in these different communities are really coming together to really make that vision themselves,” he says.

Cherkis says the debate over the distribution of funding would involve public deliberation, with a focus on disadvantaged groups like single parents, seniors on fixed incomes, and people returning home from prison.

If the proposal moves toward implementation, communities will weigh “a real diverse incubator of community-driven efforts,” Cherkis says, and as a democratic effort, “that diversity will also prove to be a strength.” Besides, Baltimore knows what the alternative—unilateral, profiteering corporate development—can do.

“When we’re leaving it up to the market to solve the housing crisis…it’s a failure,” Cherkis says. Instead, “The only other way to do this is for the public to invest” to correct “speculative pressures,” which “would create lots of jobs…and create the kind of affordability [needed for] a city where arts can thrive, where small business and creativity can thrive.”

Chris Lafferty of the community development organization North East Housing Initiative, discusses the CLT framework in the Roundtable’s report from a racial justice angle, as a strategy of “arresting decline and enabling the creation and maintenance of communities that are sustainable, as well as ethnically, racially, and economically diverse.”

The plan remains somewhat uncharted terrain. Historically, urban “renewal” has entailed two contrasting approaches to development: one is using subsidies to move public housing families into middle-class areas with better education and job prospects. But, alternatively, place-based investment, trying to change a neighborhood’s climate and social dynamics, poses a greater challenge than helping people move. Nonetheless, Johns Hopkins sociologist Stefanie DeLuca, author of a forthcoming book on urban inequality, argues that the basic principle is, “neighborhood matters.” While targeted-relocation programs help some families, she says, “we can’t leave our cities behind or these neighborhoods,” and policymakers should also prioritize “improving communities in place so that families don’t have to leave them to find opportunity.”

The CLT may be an unprecedented citywide effort to turn residents, often seen as victims of structural inequality, into community planners.

Approaching the anniversary of Freddie Gray’s death, many doubt justice will be delivered in court. But outside, his neighborhood may be seeding the foundations of a new home. Land held in trust can infuse a neighborhood with invaluable hope, beyond its market value—an investment that everyone, with a little commitment, can afford.