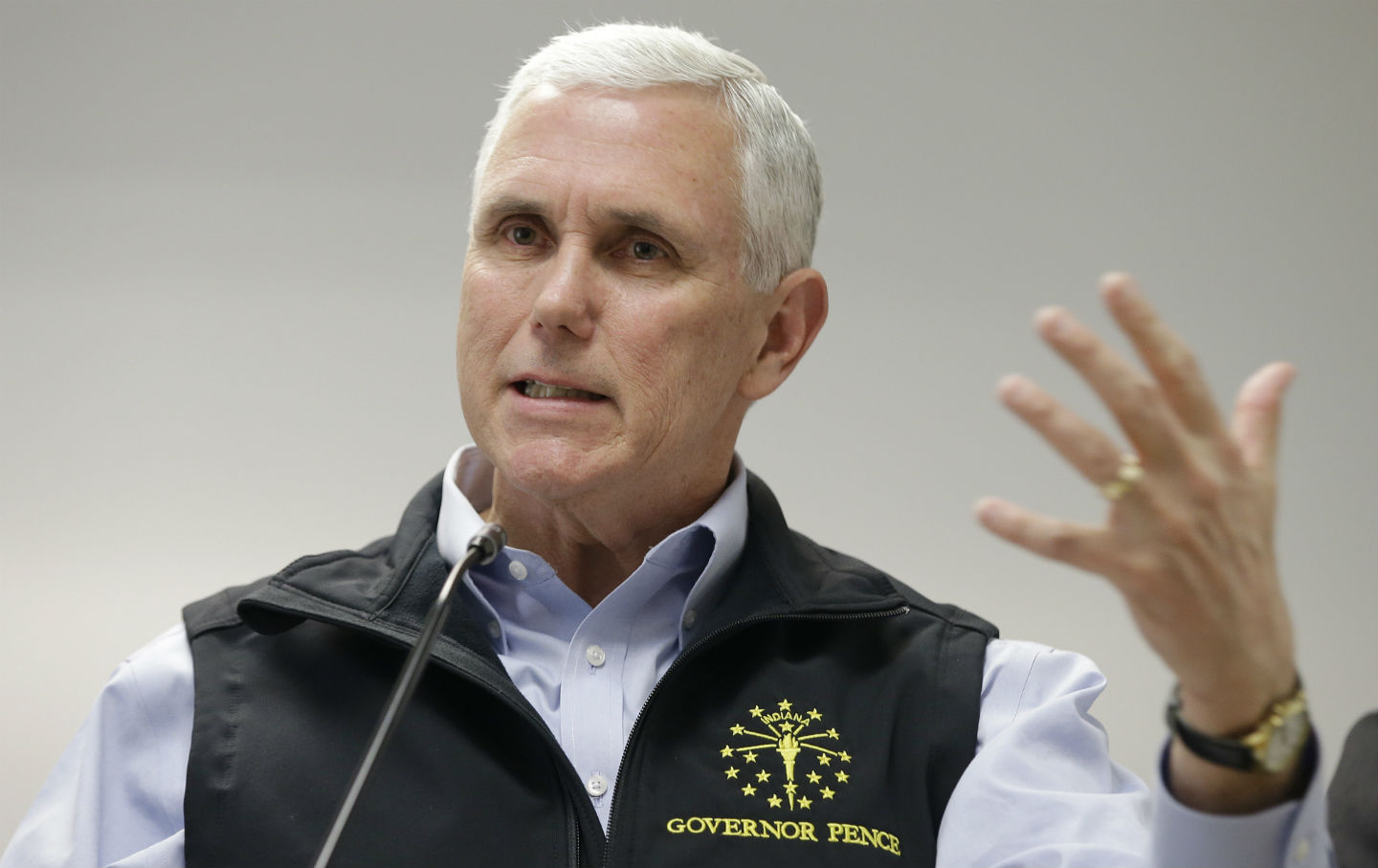 The Republican Party has managed a considerable feat. In accordance with the Trumpian mantra, “Never apologize, double down,” it’s figured out how to alienate women in two different ways. First, it offers them Donald Trump, the thrice-married misogynistic vulgarian, who talks about Megyn Kelly’s “wherever” and calls women dogs and worse, whose first wife accused him of rape in a published book, and who suggested that women who have abortions should face “some form of punishment,” before someone set him straight (no, no Donald, she’s a victim too, remember? Love them both!). Unsurprisingly, Trump is not popular with women, 77 percent of whom tell pollsters they dislike him. Still, plenty would overlook his failings, and why not? After all, women, like men, can vote for the lesser evil who is with them on the big issues, like putting Hillary in jail and building that wall. Moreover women have been raised from birth to make excuses for obnoxious men: He’s “just a little boy at heart,” that’s just “just Bob being Bob.” As noted gender theorist Kim Kardashian puts it, “I mean, he’s called me a bitch in his songs. That’s just, like, what they say.”

Second, there’s his vice-presidential hopeful, Indiana governor Mike Pence. He’s “a Christian, a conservative and a Republican, in that order,” polite, mild, married since 1985 to his first wife, Karen, who looks like a normal middle-aged woman, “empowered” but not threatening. (She founded her own business, yes, but it’s “That’s My Towel!” Charm Inc., which, um, sells little charms to affix to towels and is currently “on hold,” according to its website.) He’s also a flaming reactionary.

Just how reactionary? Pence is perhaps most famous for pushing through the state legislature a bill that permits discrimination against LGBT people by private businesses (religious institutions already have this right), a bill that, although he partially retracted it, has cost his state as much as $60 million in lost business. But there’s lots more. His opposition to abortion is a virtual obsession: He pushed Indiana’s new law, stayed by a federal judge, which bans abortion for disabled fetuses and requires women who’ve had abortions or miscarriages, no matter how early, to arrange for either burial or cremation of the remains. This is why women have been calling his office with details of their periods—who knows if a woman could be passing one of those unimplanted fertilized eggs abortion opponents consider to be children. (He also happens to be the governor of the state that sentenced Purvi Patel to 20 years in prison for a late self-abortion she claims was a stillbirth.) As my colleague Joan Walsh reminds us, Pence co-sponsored Todd Akin’s infamous anti-abortion bill that would have redefined rape as “forcible rape.”

In 2011, he led the fight to shut down the government over funding for Planned Parenthood, and as governor he cut Planned Parenthood funding in half from 2005 levels; that resulted in the closing of five non-abortion clinics that provided STD testing, and that helped fuel a rise in HIV infections so staggering it required federal intervention. In other news, as governor, he cut $1 million from domestic-violence programs, and slashed higher-education funding while cutting corporate taxes.

Before becoming governor, Pence spent 12 years in Congress, where he was one of the most conservative members. In addition to his crusade against reproductive rights, he voted for the Iraq War (which Trump now falsely claims he himself opposed), for prayer in the schools, and for barring the EPA from regulating greenhouse gases; co-sponsored a bill repealing the Affordable Care Act; and on and on. In 1992, as executive director of a conservative foundation, he even attacked president George HW Bush for signing the 1991 Civil Rights Act. He doesn’t believe in global warming or that smoking causes lung cancer, and he wants creationism taught in public schools. As governor, he even tried to block state agencies from supporting a Syrian family resettled in Indiana by the Catholic Church. Need I add that he gets an A rating from the NRA?

Pence could secure one demographic: women who find Trump too gross and also too liberal.

Pence could thus secure one demographic: women who find Trump too gross and also too liberal, i.e., white evangelicals. True, most have already gotten the memo that the casino owner and beauty-pageant impresario is a “baby Christian” who, however imperfect, will save America from Lucifer and bar Muslims from entering the country unless they come from some nice peaceful place, like Scotland. Even before the selection of Pence, the leaders of the major right-wing Republican women’s organizations, like Penny Nance of Concerned Women for America and Marjorie Dannenfelser of the Susan B. Anthony List, were more or less on board for Trump. As Eagle Forum head Phyllis Schlafly pointed out, “Jesus will not be on the ballot.” But for any churchly holdouts, the choice of Pence should be reassuring. For the rest of us, it’s a reminder that, Trump or no Trump, the Republican Party is still playing to its theocratic base. Trump thinks women are bitches and bimbos, Pence thinks they’re fetal vessels. It’s two kinds of misogyny on a single ticket. And if you think the choice of Pence is just a meaningless pander, Trump’s campaign manager, Paul Manafort, has said the VP will be handling the actual work of running the country. “He needs an experienced person to do the part of the job he doesn’t want to do.”

The Republican platform is one long, long list of evangelical greatest hits. It has kind words for homeschooling, abstinence-only programs (or as they call it, “sexual risk avoidance education”), traditional two-parent families made up of one man and one woman, and reparative therapy for LGBT kids—at least I think that’s what’s meant by “We support the right of parents to determine the proper medical treatment and therapy for their minor children,” although I suppose that could cover anti-vaccination, faith healing, and exorcism, too. It visits anathema on registering women for the draft, the Common Core, trans-friendly bathroom policies, and same-sex married couples (“We oppose government discrimination against businesses or entities which decline to sell items or services to individuals for activities that go against their religious views about such activities.” Would that cover Christians who would deny services to Hindus because Hindus worship many gods? What about Jews who object to those who accept Christ as the messiah?) Porn is a “public health crisis that is destroying the lives of millions.” The United Nations is trying to take over. The Bible should be taught in public high schools—as literature, of course. Abortion is a major theme—it’s mentioned 35 times; in case you were wondering, it should be illegal for any reason, up to and including mortal danger to the pregnant woman (actually, as I’ve frequently pointed out, this plank has been in the platform since 1976). Bring on the Human Life Amendment! Planned Parenthood delenda est!

Editor’s note: An earlier version of this article said that Mike Pence described himself as an “evangelical Catholic.” While he did for many years, he now identifies as an evangelical Christian. This article also suggested that Indiana had imprisoned Purvi Patel for 20 years. She was sentenced, in 2015, to 20 years in prison. The text has been updated.