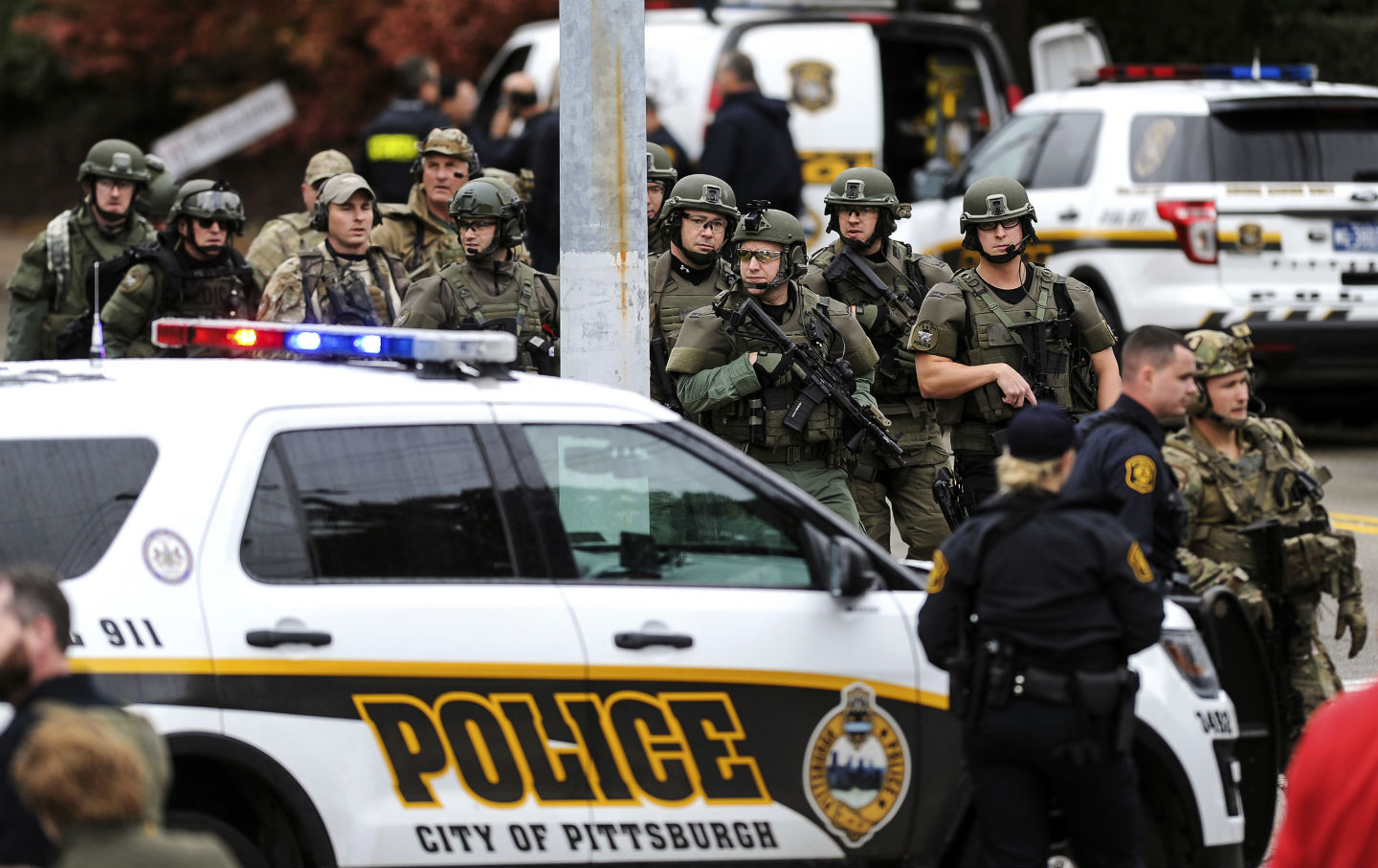 Law enforcement officers secure the scene where multiple people were shot, at the Tree of Life Congregation in Pittsburgh on Saturday, October 27, 2018. (Alexandra Wimley / Pittsburgh Post-Gazette via AP)

What is most surprising about the mass murder at the Tree of Life synagogue in Pittsburgh and the pipe bombs sent to journalists, Democratic politicians, and the philanthropist George Soros is that we find it surprising at all. After all, both perpetrators were acting on messages they had repeatedly received from President Trump and his supporters in Congress and the media.

The Washington Post’s Aaron Blake traced the ricocheting effect of the Soros-centered conspiracy theory through the White House, Republican representatives, and the increasingly bonkers right-wing media. And it’s not hard to see where these terrorists thought they were getting their instructions.

During the final days of his presidential campaign, Trump ran a commercial attacking Soros, Goldman Sachs CEO Lloyd Blankfein, and Federal Reserve chair Janet Yellen—all of them Jews—claiming they were seeking to control the world. When neo-Nazis marched in Charlottesville chanting “Jews will not replace us,” Trump called them “very fine people.” Even after a pipe bomb was discovered at Soros’s Westchester County residence, House majority leader Kevin McCarthy warned on Twitter that Soros (Jewish) and his fellow billionaires Tom Steyer (Jewish father) and Michael Bloomberg (Jewish) were trying “to BUY this election!” The National Rifle Association tweeted: “There is no end to how much they’ll pay to push their elitist agenda on Americans.” The NRA’s executive vice president accused the same three of promoting “socialism” and “social engineering.” Fox Business Network host Lou Dobbs allowed a guest to complain that the migrant caravan headed to the US-Mexico border was the result of the “Soros-occupied State Department.” NRATV correspondent Chuck Holton explained that “the real story here is the nexus we’re finding…. It’s telling that a bevy of left-wing groups are partnering with a Hungarian-born billionaire [i.e., Soros] and the Venezuelan government to try to influence the 2018 midterms by sending Honduran migrants north in their thousands.” Fox Business’s Maria Bartiromo pushed part of the same outlandish idea: “I mean, who do you think is behind these caravans? A lot of speculation that it was George Soros.” This led Texas Republican Louie Gohmert to say, again on Fox News, that “the Democrats—perhaps Soros, others—may be funding this, thinking it’s going to help them.”

Next thing you know, Trump is tweeting deliberately deceptive videos of the caravan and asking, “Can you believe this, and what Democrats are allowing to be done to our Country?” And his idiot son Don Jr. retweeted the idiot actor James Woods, who opined that the caravan was an “election trick” attributable to “Soros nonsense.” All of this took place in the context of Fox News’ Laura Ingraham, in an echo of both Trump and former Ku Klux Klan grand wizard David Duke, telling viewers that liberals were seeking to replace real American voters with immigrants. Her colleague Tucker Carlson went even further, insisting that liberals were supporting “genocide” against white men. 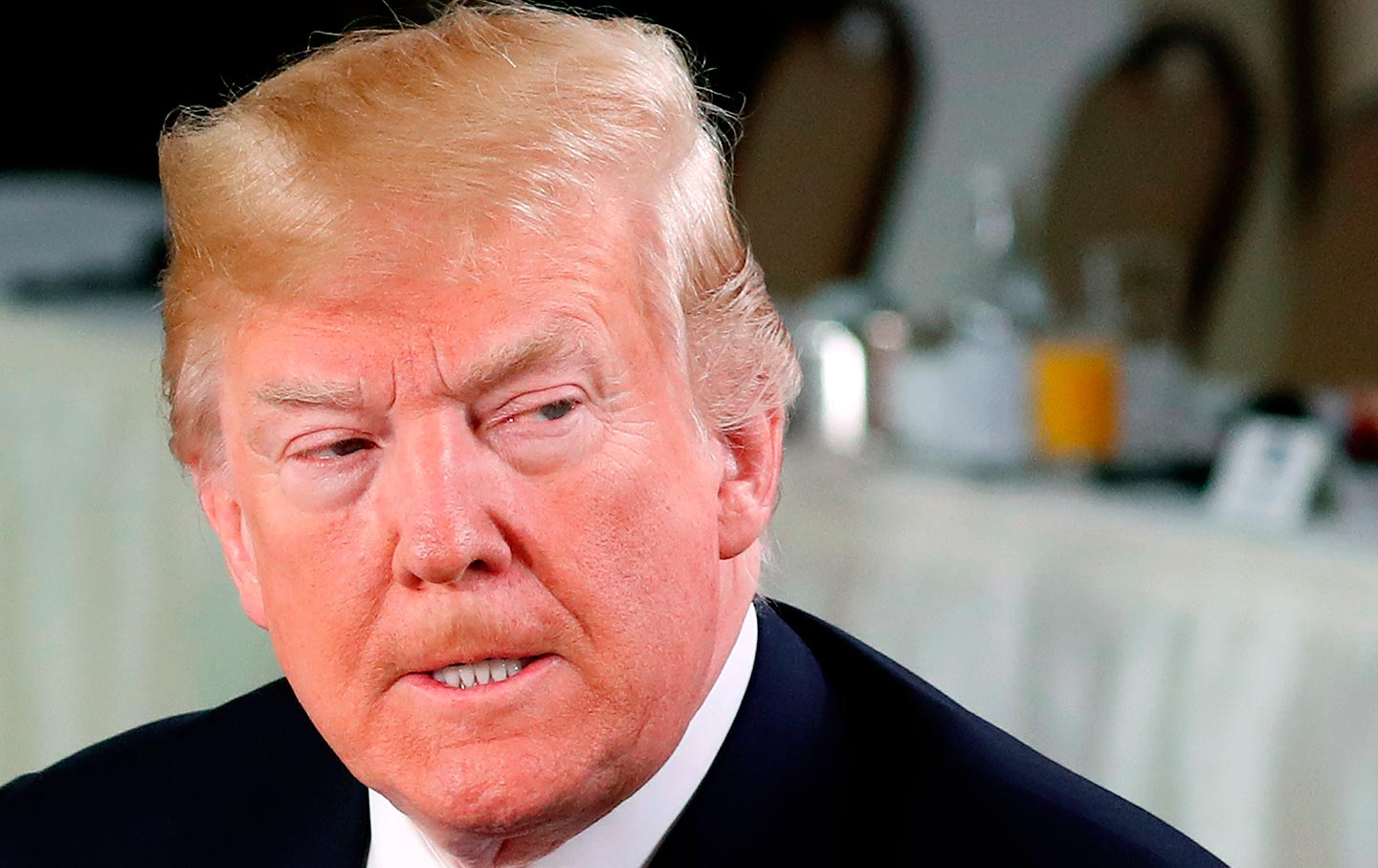 Trump’s Genius Is His Entertaining Idiocy

If liberal Jewish financiers are conspiring to use immigrants to “replace” you and eliminate your race, doesn’t that call for an extreme response? And is it really that extreme to start shooting when you have a president who encourages violence against journalists and liberal protesters? The Internet posts of alleged Florida pipe bomber Cesar Sayoc were filled with conspiracy theories and violent insinuations. He seemed to harbor a particular disdain for Hollywood and the media, according to The Washington Post. (Now who does that sound like to you?) Sayoc’s family lawyer, Ronald Lowy, said the suspect “had no interest in politics” until “the presidential campaign of Donald Trump, who welcomed all extremists, all outsiders, all outliers, and he felt that somebody was finally talking to him.”

And what of apparent mass murderer Robert Bowers? He too listened to Trump and company. Before he entered the synagogue, Bowers posted that the Jews of the Hebrew Immigrant Aid Society, which helps resettle refugees in the United States, sought “to bring invaders in that kill our people.” He could not “sit by and watch [his] people get slaughtered.” Such talk is an overenthusiastic extension of the world of Trump tweets, Republican campaigning, Fox, and NRATV—not to mention Breitbart, The Gateway Pundit, Infowars, and the unpoliced corners of Facebook, YouTube, and Twitter.

Acting like representatives of a quisling government, Israeli right-wingers rushed uninvited to the scene of the shooting, Pittsburgh’s Squirrel Hill neighborhood, to absolve the Trump administration of its responsibility. Predictably, they blamed liberals, when it’s really the president’s rhetoric that threatens American Jews. Naftali Bennett, the far-right minister of the diaspora, disputed—without evidence—the Anti-Defamation League’s statistics about the alarming rise of right-wing anti-Semitism and neo-Nazi agitation since Trump’s inauguration. And as a reminder that these people are as bizarre as they are hateful and incompetent, Vice President Mike Pence participated in a ritual with a defrocked Jews for Jesus rabbi.

Meanwhile, the Jews of Squirrel Hill showed us another America and another Judaism as they marched in dignified protest of Trump. Ari Mahler, a nurse and one of three Jews who helped save Bowers’s life after he was shot by police, explained: “I didn’t see evil when I looked into [his] eyes. All I saw was a clear lack of depth, intelligence, and palpable amounts of confusion.” Meanwhile, Jeffrey Myers, the Tree of Life rabbi, told Trump: “Mr. President, hate speech leads to hateful actions. Hate speech leads to what happened in my sanctuary.” But Trump wasn’t listening. In one of his countless incendiary lies, he said afterward, “The fake news is creating violence”—no doubt encouraging his army of violent misfits to find new targets for their frustration, ignorance, and boundless hatred.