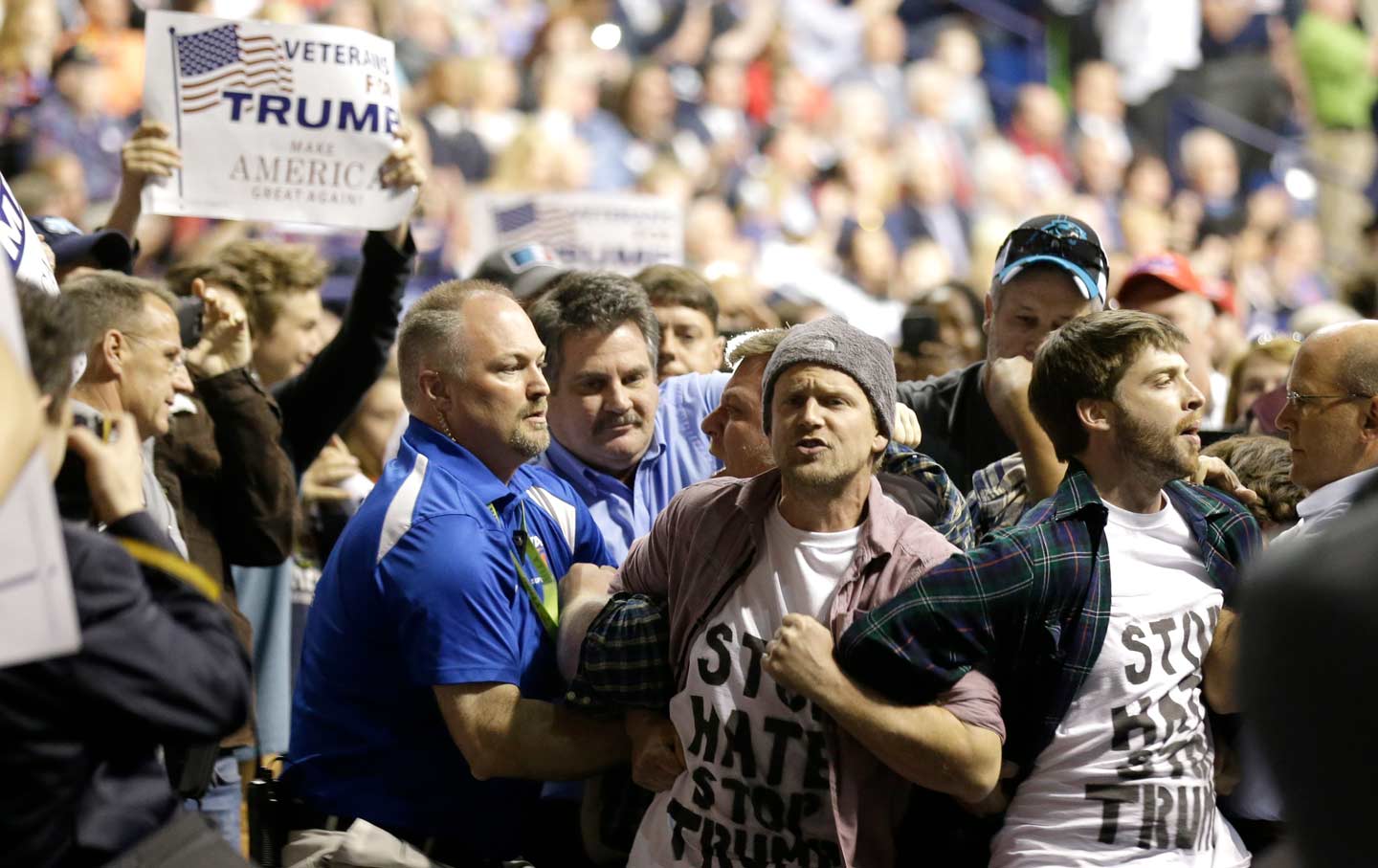 In this late stage of the depressing 2016 Republican primary, Donald Trump’s three remaining rivals are looking to tar the front-runner as a con man and business fraud whose vulgar bullying shames the party of Abraham Lincoln and Ronald Reagan. What does it mean, then, that on Thursday night all three whiffed at the chance to denounce what may be the most shocking aspect of the Trump phenomenon: the escalating violence, against protesters as well as the media, by pro-Trump mobs (and in one notorious instance, allegedly by Trump’s campaign manager)?

George Zornick laid it out here: Just as some in the mainstream media blame President Obama for the rise of Trump, Trump and his rivals now, likewise, blame the president for the increasing violence on the Trump campaign trail. At Thursday’s debate, CNN’s Jake Tapper asked all four candidates about the Wednesday night attack on a peaceful black protester who was sucker punched in the face by a Trump supporter. (“Next time we see him, we might have to kill him,” the man said; he was later charged with assault.) This is one of at least a dozen cases of protesters and the media being roughed up at Trump events, which Tapper noted the candidate has encouraged. “I’d like to punch him in the face,” Trump said about a demonstrator two weeks ago. On February 1, he told the crowd: “Knock the crap out of him, would you?”

Trump defended it, of course—“We have some protesters who are bad dudes, they have done bad things,” he told Tapper—but shockingly, his rivals dismissed it as well. Senator Ted Cruz essentially blamed Obama for Trump supporters’ violence: “You know, we’ve seen for seven years a president who believes he’s above the law,” Cruz said. Voters feel “disrespected by Washington” because “Washington isn’t listening to the people. And that’s the frustration that is boiling over.” Kasich blandly and sympathetically noted that “people are uptight” about job loss and low wages; Florida Senator Marco Rubio denounced “violence in general,” worked in a tribute to “our law enforcement officers,” acknowledged “people are angry” and tiptoed toward suggesting maybe, possibly Trump isn’t channeling that anger well. “Leadership is not about using the anger; leadership is about using the anger to motivate us, not to define us.”

That bowl of mush is as close as anyone got to criticizing the GOP front-runner for the violent mob behavior at his rallies. Unfortunately, Tapper didn’t ask a direct question about one of the worst examples of brutality: On Tuesday night, Trump campaign manager Corey Lewandowski allegedly grabbed a reporter by the arm to get her away from his boss, and threw her almost to the ground, leaving her in tears and with bruises on her arm. Shockingly, the reporter turned out to be Michele Fields of Breitbart.com, a faux-news website that has been slavishly devoted to promoting Trump.

Ignored at the debate, the Lewandowski-Fields clash came up in the spin room afterward. Amazingly, Trump denied it. “I think she made it up,” he told Politico’s Dylan Byers. Lewandowski himself took to Twitter to gaslight Fields and call her “delusional,” claiming (with no evidence) that she’d made false claims covering other Republicans.

That’s when things got really weird.

Fields’s account is corroborated by eyewitness Ben Terris of The Washington Post, who wrote about it here. Politico has audio that captures the clash. Here’s a snippet of the transcript, between Terris and Fields, after the reporter was assaulted.

Terris: “Yeah, he just threw you down.”

Fields: “I can’t believe he just did that, that was so hard. Was that Corey?”

Fields: “That was insane. You should have felt how hard he grabbed me. That’s insane. I’ve never had anyone do that to me from a campaign.”

On Wednesday afternoon, Lewandowski reportedly confirmed the incident to Breitbart political editor Matthew Doyle, normally a Trump toady. Lloyd Grove reports that Lewandowski told Doyle “that he and Fields had never met before and that he didn’t recognize her as a Breitbart reporter, instead mistaking her for an adversarial member of the mainstream media.”

For a while, Breitbart was soft-pedaling the story, asking Fields not to talk to reporters and seeming to seek a way to make things right with Trump. One Breitbart staffer even took to Twitter to try to discredit Fields; he was later suspended. But when Trump denied the Fields story, the Breitbots belatedly seemed to recognize their man’s dishonesty, along with his campaign’s increasing brutality. Its top editors demanded an apology. Fields tweeted a photo of her forearm, featuring dark bruises that seem to match fingerprints, with the comment, “I guess these just magically appeared on me.”

Then, unbelievably, the story took another turn: Breitbart is now running what it claims is video showing the man who assaulted Fields was not Lewandowski. In fact, the new video shows no such thing. It does show that there was another white guy with short hair near Lewandowski and Fields, and it claims that guy assaulted Fields, not the campaign manager. But since the video doesn’t show the assault itself, we’re left with the eyewitness account by Terris, and Fields’s own insistence that it was Lewandowski, as the most reliable evidence of what actually happened.

The new Breitbart report is unbelievable in its deference to Trump. It claims multiple videos prove “it was unlikely that Lewandowski was the person who caused her injuries…. The possibility of mistaken identity cannot be ruled out. Indeed, given Lewandowski’s adamant denials (coupled with statements inappropriately impugning Fields’s character), it is the likeliest explanation. In addition, the injury may have been accidental, owing simply to the chaos of the press scrum.”

The entire right-wing media is now consumed with the Lewandowski-Fields story. That’s only fair: The entire right-wing media deserves to be burned by the Trump phenomenon, because for too long it looked away from the barely suppressed violence of his supporters. The story of the modern Republican Party is the story of too many leaders trying to channel the anger and hatred fomented by demagogues like Trump, whether it’s Richard Nixon channeling George Wallace with some of his racism finessed, or Mitt Romney embracing Trump himself and ignoring the racist birtherism at the heart of his political appeal just four years ago.

Finally, there’s a growing movement within the GOP to repudiate Trump and his coarse appeal. For a moment, it seemed as though Breitbart.com might join that movement, but now the Breitbots have turned on their own reporter.

As her employers cast doubt on her story, Fields filed criminal charges against Lewandowski in Jupiter, Florida, on Friday morning. This story isn’t going away. Unfortunately, so far the GOP candidates are acting like Trump’s friends at Breitbart: They seem afraid to acknowledge the thuggery at the heart of the Trump campaign.