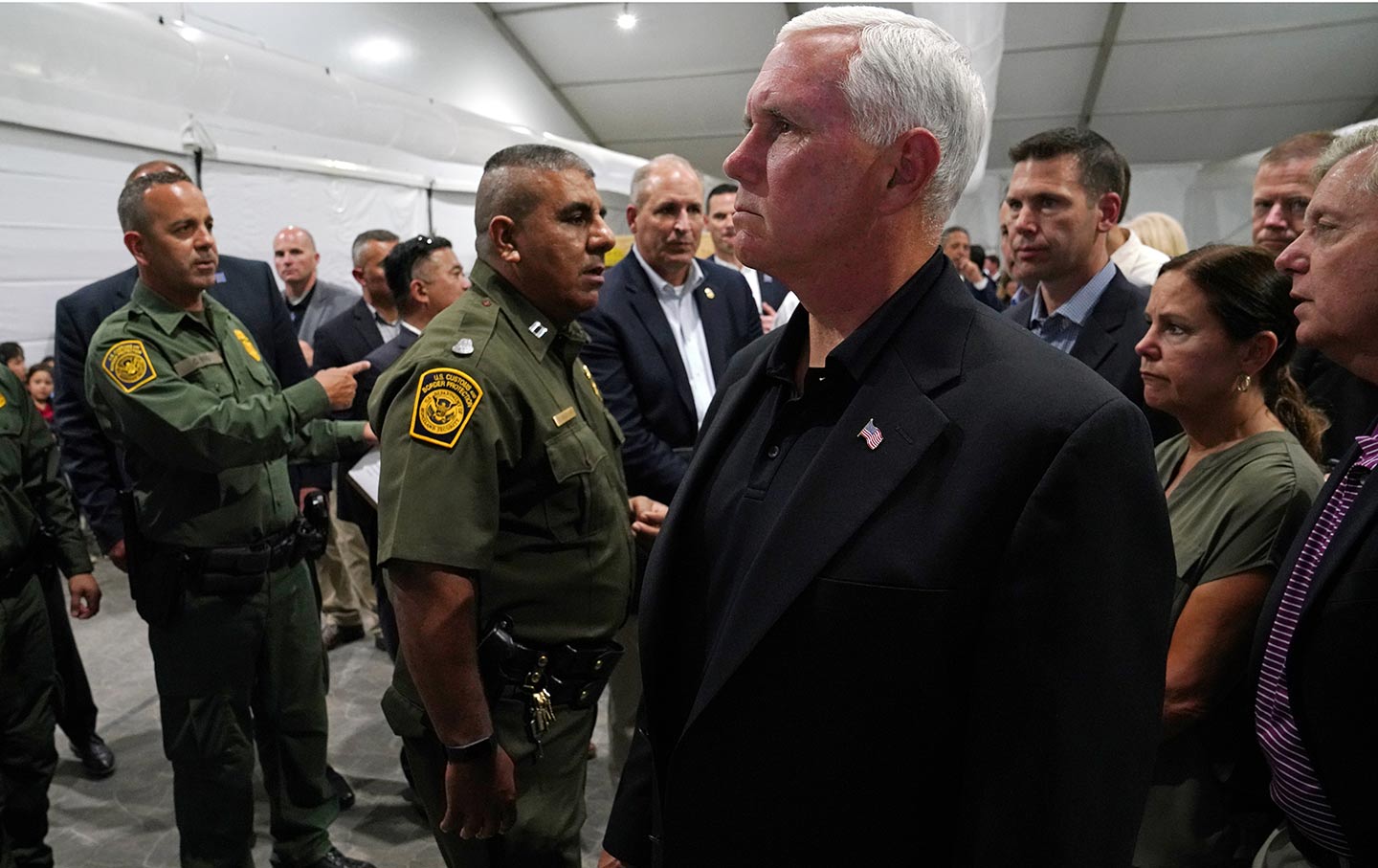 My first reaction to seeing the horrifying photos of desperate immigrants detained in McAllen, Texas, as they were “visited” by Vice President Mike Pence and a posse of GOP senators Friday, was disbelief: Surely the powers that be could have created a Potemkin Pueblo on the border—kids with bunk beds and toys, maybe; adults in a no-frills barracks-style setting, but with cots and clean bedding and toiletries—to create reassuring photo ops for the media traveling along with Pence.

Of course they could have. And there’s a reason they chose not to. As always when puzzling over a Trump administration move, remember the most important adage of the Trump era, coined by The Atlantic’s Adam Serwer: “The cruelty is the point.” The same goes for Trump’s ICE raids, pre-announced for Sunday, which mostly didn’t happen over the weekend but could take place throughout this week. ICE raids obviously work better with an element of surprise; Trump wanted to broadcast his cruelty to his followers, who aren’t likely to pay attention to if, when or where the raids—scheduled for 10 progressive cities—actually happened.

There is no doubt that the images from the McAllen detention center were horrific; the men looked absolutely miserable. The Washington Post’s Josh Dawsey was on pool duty for the crew of journalists allowed to tour the facility with Pence, and to be honest, his words were as searing the images: He reported that roughly 384 men were “in caged fences with no cots,” cages “so crowded that it would have been impossible for all of the men to lie on the concrete.” Not only was it “sweltering hot,” Dawsey wrote; “the stench was horrendous.” Some of the men told reporters they’d been there “40 days or longer.”

Later came videos: caged men asking for “agua,” yelling “no shower, no shower,” and saying they’d been locked up for “cuarenta” (40) days; men wearing face masks and pulling clothing up over their noses, presumably to minimize the stench. In one video, Pence ignored the men to talk to a guard, who boasted that they had watchtowers all around the cages to monitor the men and remove anyone “who gets rowdy.” Senator Lindsey Graham, the former self-styled “maverick” who’s become a Trumpian monster, looked into the cages blankly, not interacting with any of the men inside. Pence didn’t either; he turned his back and walked away.

After the photos and videos hit cable news, there were righteous howls from journalists and folks on social media. So Pence channeled his boss and took to Twitter Saturday morning to denounce CNN as “dishonest”—no idea why he singled out CNN, where (full disclosure) I’m a contributor, when the images were everywhere—in a five-tweet defense of conditions at McAllen. Here are the two that were most appalling:

The crisis at our southern border is not a “manufactured crisis,” it is real and is overwhelming our system. To show this, we also visited an overcrowded facility for adult men, many of whom have been arrested multiple times.

ignoring the excellent care being provided to families and children. Our great @CBP agents deserve better and the American people deserve the whole story from CNN! pic.twitter.com/hsKsU6umhW

In the first, let’s be clear: The crisis at the border is absolutely a manufactured one, created by Trump’s policy of turning away asylum seekers and separating families. But also note the reference to “adult men, many of whom have been arrested multiple times.” Pence presented no evidence of that. It sounded a lot like Trump claiming that undocumented Mexican immigrants were “bringing drugs…bringing crime. They’re rapists,” in his June 2015 campaign kickoff.

In the second awful tweet, in which Pence brags about the “excellent care” given to the children in the picture, well, the photos he tweeted himself prove Pence is a liar. We see a little boy whose head doesn’t reach the vice president’s waist staring blankly, as well as a toddler girl sitting alone behind him on a bench, looking forsaken. If that’s “excellent care,” never leave your kids alone with Mike Pence. I couldn’t stop thinking about those two tiny faces all weekend.

Clearly, though, Pence and Trump didn’t want to sanitize their border cruelty; they wanted these images broadcast. Their base no doubt thrills to the photos of brown men in cages; the brown children, well, they’re there because of their criminal parents. Pence’s performative Christianity sickens me, but it’s clear he worships one God, and it’s Donald Trump.

It was a relief that there were very few actual ICE raids on Sunday, although more could come this week. But again, the announcement of the raids had their intended effect: They terrorized immigrant communities and forced advocates to spend scarce time and money strategizing to protect the undocumented, rather than working to get the children and others cruelly detained at the border released. And they broadcast Trump’s trademark cruelty to a base that loves it.

More and more this weekend, I perceived that we live in two countries. In Trump-loathing America, which makes up the majority today, as it did in 2016, the squalid detainee camps and the cruel and unnecessary ICE raids sicken us, even as they thrill and energize Trump’s rabid minority. Meanwhile, Democrats have spent the last week fighting one another more avidly than fighting Trump, a sad topic for another story. But it must be observed: If the petty bickering between the left and the center-left continues through next November, the vicious Donald Trump could slime his way to another victory. Let’s hope the weekend of terror scares feuding Democrats as much as it energizes Republican racists.