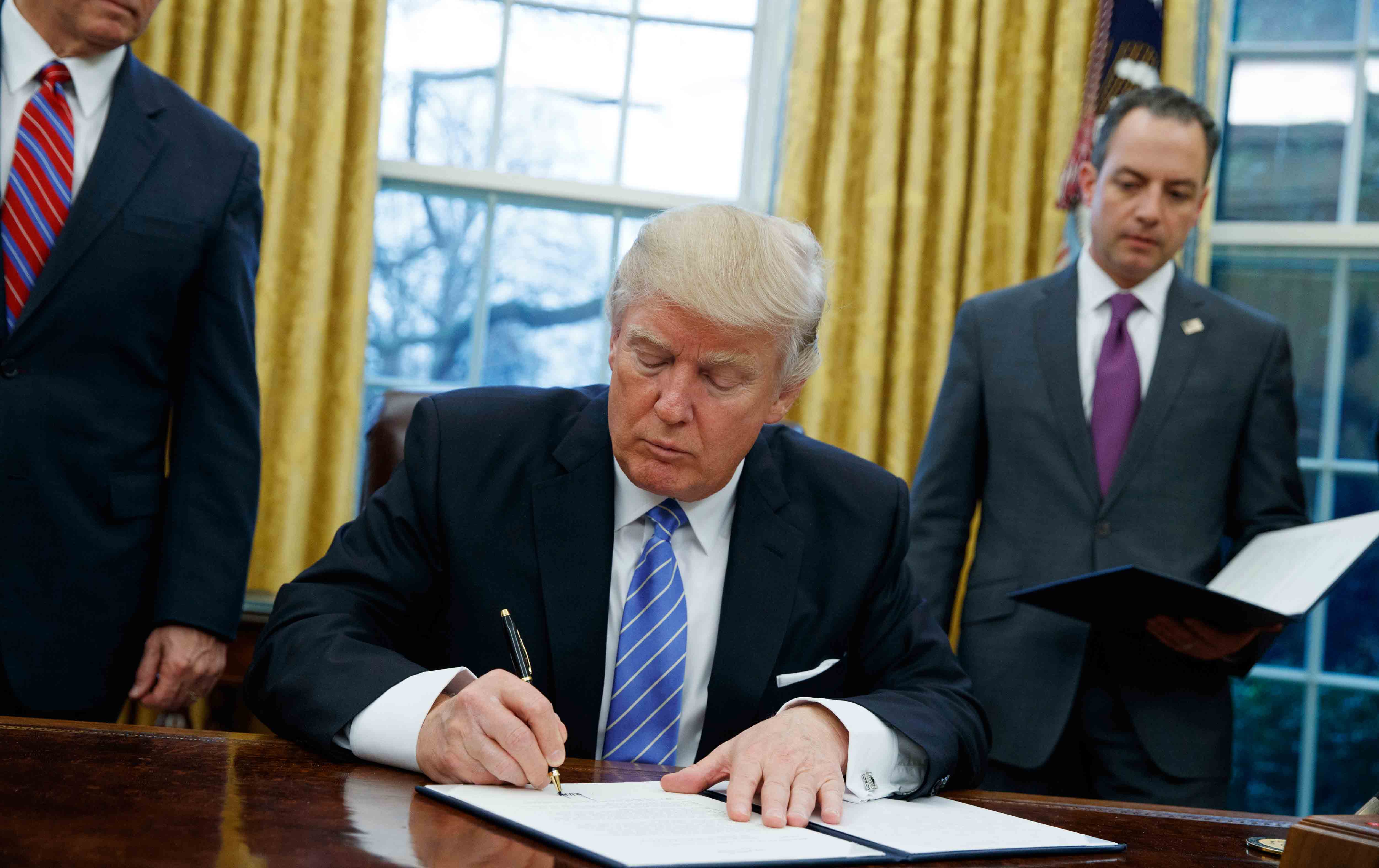 President Trump’s formal withdrawal from the Trans-Pacific Partnership, fulfilling an “on day one” campaign promise, merely adds the tombstone to an already dug grave. Bipartisan opposition from Congress prevented the TPP from a final vote that supporters knew they would lose. As Senate minority leader Chuck Schumer said Monday, “TPP was dead long before President Trump took office. We await real action on trade.”

Before that real action comes, we should note the importance of the political shift. The debate about the TPP, the first major debate on the US-led globalization agenda in over two decades, revealed a crumbled consensus. The public recognized that free-trade deals aren’t about free trade anymore—tariffs are currently so low it would be hard to get them meaningfully lower—but about guaranteeing corporate profits through eliminating regulations and enforcing patents. Another deal written in secret, with lobbyists whispering in negotiators’ ears, gave nobody confidence that this would change. Secret enforcement tribunals were a prime target for criticism, because they protect corporate and investor profits and enable financial speculation. No such platform exists for workers if their rights are violated.

The populist revolt against this unbalanced framework favoring elite corporations over citizens really started within the Democratic rank and file. President Obama’s relentless TPP salesmanship damaged Hillary Clinton’s electoral hopes, but before Election Day, virtually every major figure in the party had abandoned the TPP. The activist outcry made passage in Congress impossible, despite the agreement being inked in October 2015. Democratic governance defeated the TPP; Trump just supplied the paperwork after the fact.

Where does this leave us? This is a rare area where Trump has articulated a consistent agenda. Trump has announced intentions to schedule meetings with the heads of state of Canada and Mexico, with the purpose of renegotiating NAFTA, which he blames for the decline of US manufacturing. (The extension of permanent normal trade relations with China had much more to do with it.) Even before that, Trump will meet with British Prime Minister Theresa May, in talks intended to move toward a US-UK trade deal that would accompany Britain’s exit from the European Union. Why bilateral deals should be preferred over multilateral ones is unclear, but Trump has promised they would result in untold riches for America.

The details, predictably, have been fuzzy. Jared Bernstein and Lori Wallach have argued that a new trade agenda would have to include enforceable labor and environmental standards, a more level playing field for small and medium-sized businesses, and a prohibition on deals with regimes that have a history of human rights and labor violations. They want investor-friendly tribunals that circumvent national courts excised from trade agreements, along with provisions that preempt consumer safety or financial regulations, or strengthen patent-base protectionism.

Trump has talked a lot about trade, but I don’t know his team’s views on practically any of these points. He wants to assist the auto industry by requiring more of each vehicle to be produced in North America to qualify for NAFTA tariff exemptions, and maybe mandate quotas for domestic production on certain goods. But regulatory standards or dispute settlement is a different matter. The White House’s general antipathy to the public sector suggests that preserving sovereign regulatory capacity won’t be an overriding concern. And the lack of transparency around how these deals will be conducted makes it harder to expect anything positive.

Trump and his advisers have differed on tariffs, his big stick in negotiations with corporations and countries. As president, Trump has already promised a “very major” border tax on companies that outsource jobs. But his commerce secretary nominee, Wilbur Ross, who will be among the administration’s leaders on trade, played down border taxes in his confirmation hearing. “I think tariffs play a role both as a negotiating tool and where necessary to punish those who don’t play by the rules,” Ross said.

It’s hard to effectively threaten to jack up tariffs when your top trade advisor calls it a ploy before one word is ever exchanged with a trade partner. And now that Trump has blasted the Republican border-adjustment plan, which would have altered the tax structure to favor exports, I’ve begun to doubt whether any tariff-like policy will truly reveal itself except in an @POTUS tweet.

Bluster aside, you can expect Trump to use current multilateral frameworks to punish bad trade actors. I’d expect him to follow Obama’s late-term WTO complaint on Chinese aluminum subsidies with a crackdown on Chinese acquisitions of semiconductor companies. Schumer groused on the Senate floor today that Trump had not fulfilled another promise, to label China a currency manipulator that artificially makes their exports more attractive. But other countries more involved in currency manipulation right now, like South Korea, could get tagged by the Treasury Department. Standards on currency should also be enforceable in any bilateral deal, though Trump has never promised that.

Democrats have generally applauded the TPP withdrawal, while expressing their willingness to work with Trump on worker-friendly trade policies. They could do one thing to ensure that standard: push to revoke fast-track trade authority that transfers responsibility for trade from the legislative to executive branch. With only bilateral trade deals on the agenda, the need for coordination at the executive level with a special process to bypass Congress has been eliminated. Only small-d democratic decision-making can rescue an insular, special interest–dominated process. If Trump wants to stick to his word on a worker-centric trade system, he’ll close the back door for corporations.