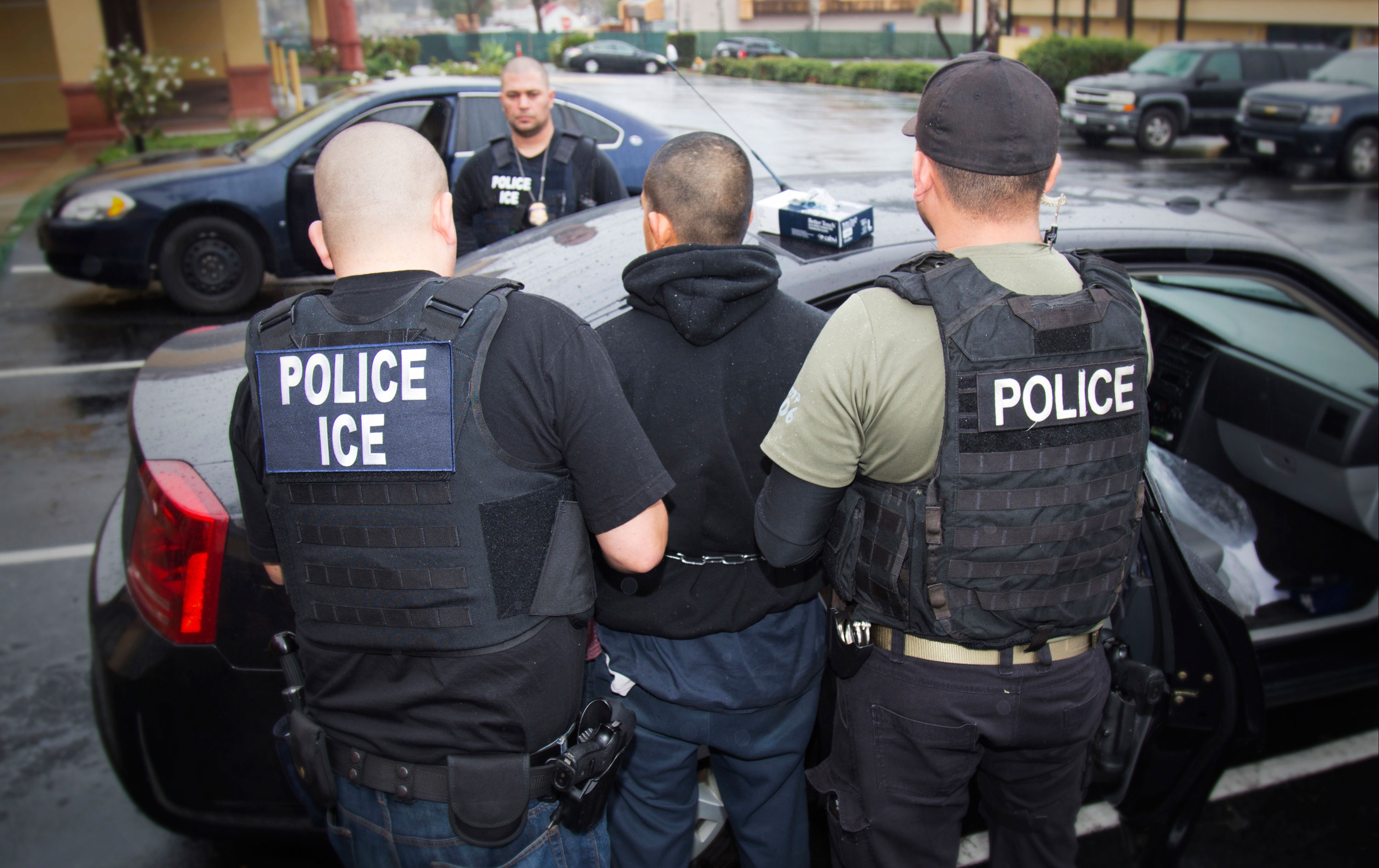 ICE conducted a raid in Los Angeles on February 7. (Charles Reed / US Immigration and Customs Enforcement via AP)

Last week, President Donald Trump admitted that his administration’s deportation agenda is “a military operation.” The United States is “getting really bad dudes out of this country. And at a rate nobody’s ever seen before,” he announced at a meeting with manufacturing-industry CEOs. “And it’s a military operation because what has been allowed to come into our country, when you see gang violence that you’ve read about like never before and all of the things—much of that is people who are here illegally.” Trump’s words, however rambling, summed up the aggressive, wide-ranging policy being put into effect by his administration’s executive orders and the Department of Homeland Security’s recent memorandums.

Two weeks ago, Immigration and Customs Enforcement undertook a series of splashy raids and arrested some 700 noncitizens for removal, and Trump has embarked on a rapid expansion of the country’s deportation machinery. But his recent boastfulness undercuts his own cabinet members’ attempts to portray his enforcement program as a more restrained affair.

DHS Secretary John Kelly, in a recent meeting that he and Secretary of State Rex Tillerson had with President Enrique Peña Nieto in Mexico, said, “There will be no use of military forces in immigration.” Kelly added, “There will be no—repeat, no—mass deportations.” It was a reiteration of remarks that Kelly had made earlier that week in Guatemala. But despite his best attempts to ease the panic in immigrant communities across the United States, Kelly couldn’t distance himself from his boss’s grandiosity—or the reality laid out in Kelly’s own memos, released last week, that provide his department with guidance on how to implement the president’s executive orders. They make clear that the raids two weeks ago were just the beginning. The memos “are a guide for Trump to enact his mass-deportation agenda,” says Marielana Hincapié, executive director of the National Immigration Law Center. “And actually, they are even more extreme than [Trump’s] rhetoric.”

The first thing that Kelly’s memos clarify is how his agencies ought to adhere to Trump’s executive orders, which call on immigration agents to enforce the law against “all removable aliens.” On February 22, Kelly insisted that enforcement would prioritize targeting “criminal offenders,” as prior administrations have done. But such a tiered system, which shielded some classes of undocumented immigrants from removal, is nowhere evident in his memos. In his memo translating Trump’s directive for ICE and the Border Patrol, Kelly orders those agencies to treat just about all undocumented immigrants as “priorities” for enforcement. Trump himself called for the DHS to go after nearly every undocumented immigrant, by pursuing those who (1) have been convicted of crimes, (2) have not been convicted but merely charged with a crime, (3) have committed any act that could be construed as a “chargeable offense,” (4) have used a fake Social Security number to work or pay taxes, (5) have availed themselves unlawfully of public benefits like food stamps or public assistance, (6) have a deportation order against them, or (7) pose a public-safety risk in the eyes of any immigration officer. These categories are so broad that they eliminate any veneer of “prioritizing” enforcement. The fourth category—using a fake Social Security number to work and pay taxes—is part and parcel of undocumented life. The seventh category offers immigration agents and law-enforcement officers so much discretion as to basically invite racial profiling. The second and third mean that immigrants will be particularly vulnerable in locales where policing and patrolling is discriminatory—which, in the United States, is many places.

And Kelly’s memos offer updated directives on that very topic, beefing up programs that allow police to get involved in enforcing Trump’s deportation agenda. The DHS secretary calls for the resuscitation of Secure Communities and the expansion of 287(g), programs that enable the federal government to piggyback on local policing to help catch undocumented immigrants. 287(g) deputizes local and state law-enforcement officers as immigration agents so that they can arrest people on federal immigration violations in the course of their policing work.

The DHS will be constrained in its efforts by the finite number of beds in detention centers, the notoriously backlogged immigration courts, and the size of its enforcement ranks (even though the number of ICE and Border Patrol agents alone has doubled in the last decade). But there, the DHS has offered some ideas, including the hiring of 5,000 more ICE and Border Control agents.

The memos also include a plan to deport those caught entering the country via Mexico back to Mexico—even if they are not Mexican nationals: “Returning [migrants] to the foreign contiguous territory from which they arrived…saves the Department’s detention and adjudication resources for other priority aliens.” In recent years, the largest surge in those caught at the border has been children and families fleeing violence and crime in Central America. This plan would shove Guatemalans, Salvadorans, Hondurans, and others into Mexico to await the resolution of their immigration cases in the United States; they would attend their immigration-court proceedings through a “functional, interoperable video teleconference system” that the DHS seeks to build.

The memos also lay out harsher, more punitive policies for asylum-seekers. Among them, Kelly proposes that the parents of undocumented children who migrate to the United States be considered accomplices in human trafficking, since many family members pay smugglers to help ferry the children to safety. He recommends that those parents be pursued for any possible immigration violations and referred for criminal prosecution.

Herein lies the real messaging sleight of hand from a president who boasted that, on immigration, he has “the biggest heart of anybody.” The only way to achieve a mass-deportation agenda of the scope that Trump intends is to turn a person’s very existence into a crime. The DHS memos released last week show us just how that will be done.

Editor’s note: This piece has been slightly updated and published in the March 20 issue of The Nation.