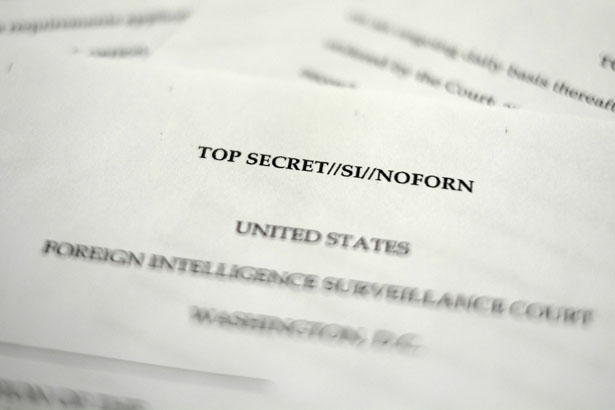 Good old George can stop spinning in his grave. Yes, that George, our most heroic general and inspiring president, who warned us in his farewell address “to guard against the impostures of pretended patriotism. …” It’s an alert that’s been ignored in the nation’s hysterical reaction to the attacks of 9/11 that culminated in the NSA’s assault on our Constitution’s guarantee of “the right of the people to be secure in their persons, houses, papers, and effects, against unreasonable searches and seizures.…”

That right was reaffirmed boldly and righteously Monday, for the entire world to hear, by F. James Sensenbrenner, the Republican chair of the House Judiciary Committee, which unanimously had produced the USA Patriot Act. Speaking on Monday at the Civil Liberties Committee of the European Parliament, Sensenbrenner blasted the misuse of the Patriot Act by the NSA and other government agencies entrusted with ensuring the nation’s safety.

“But the NSA abused that trust. It ignored restrictions painstakingly crafted by lawmakers and assumed a plenary authority we never imagined,” the Wisconsin congressman said. “Worse, the NSA has cloaked its operations behind such a thick cloud of secrecy that even if the NSA promised reforms, we would lack the ability to verify them.

“The constant stream of disclosures about U.S. surveillance since June has surprised and appalled me as much as it has the American public and our international allies,” Sensenbrenner continued. “I have therefore introduced legislation along with Senator Patrick Leahy, the chairman of the Senate Judiciary Committee, that will curtail surveillance abuses and restore trust in the U.S. intelligence community.”

Their bill is titled the “USA FREEDOM Act,” the acronym a shortcut for United and Strengthening America by Fulfilling Rights and Ending Eavesdropping, Dragnet-collection, and Online Monitoring. As Sensenbrenner points out, “The title intentionally echoes the Patriot Act because it does what the Patriot Act was meant to do—strike a proper balance between civil liberties and national security.”

The Sensenbrenner-Leahy bill, endorsed by the ACLU and the National Rifle Association, more than 100 bipartisan members of Congress, leading Internet companies and major newspapers, stands in principled contrast to the one pushed through the Senate Intelligence Committee, chaired by Dianne Feinstein, the California Democrat who has long been the most shameful apologist for the antics of the NSA.

A historic moment of shame was noted by Sensenbrenner in his remarks to the European Parliament committee: “On October 31, in an 11-4 vote, the Senate Intelligence Committee voted for the first time in our country’s history to allow unrestrained spying on the American people. I am committed to a different approach.”

His proposed law bans bulk collection of personal data by the NSA as well as other agencies under the Foreign Intelligence Surveillance Act and National Security Letter statutes but, as Sensenbrenner notes, it does not prevent government agencies from doing the hard work of protecting the nation:

The USA FREEDOM Act would end the NSA’s bulk collection of data under the Patriot Act whether it pertains to Americans or foreigners. The U.S. government would still be able to follow leads and obtain data when it has a reasonable suspicion that someone is connected to terrorism, but it would no longer be able to collect data indiscriminately in bulk from innocent people.

A ban on bulk collection, the “general warrants” employed by agents of the English crown, was abhorrent to the colonists as a fundamental violation of the sovereignty of the individual, thought to be indispensable to the survival of a free people. It is a principle developed in English common law, legislated by the Massachusetts Bay Colony and at the heart of the Fourth Amendment providing sanctuary in one’s home, person and thoughts. Today’s pretend patriots have shred that principle, wielding the power of a new technology of surveillance that dictators of old could never have imagined.

“Despite the expense,” Google executives Eric Schmidt and Jared Cohen wrote in their recent book, “everything a regime would need to build an incredibly intimidating digital police state—including software that facilitates data mining and real-time monitoring of citizens—is commercially available right now. … By indexing our biometric signatures, some governments will try to track our every move and word, both physically and digitally.”

That was written in April, before the Edward Snowden revelations, and the assumption was that such nefarious governments would never be our own. We now know otherwise, and it underscores the wisdom of our nation’s founders in designing a system of government that separates and properly limits governmental power even when the wise folks who wrote our Constitution administer it.

That was the inherent wisdom of George Washington, no slouch when it came to protecting the nation’s security, but ever aware that it will be lost if the individual liberty of the citizen is squandered. Thankfully, there are still a few political leaders like Leahy the Democrat and Sensenbrenner the Republican who can unite on that point. How reassuring to have bipartisan unity on protecting civil liberty and resisting jingoism, just as Washington had urged:

In offering you, my Countrymen, these counsels of an old and affectionate friend … to moderate the fury of party spirit, to warn against the mischiefs of foreign Intrigue, to guard against the Impostures of pretended patriotism.

Go George! A couple of congressmen have heard you.