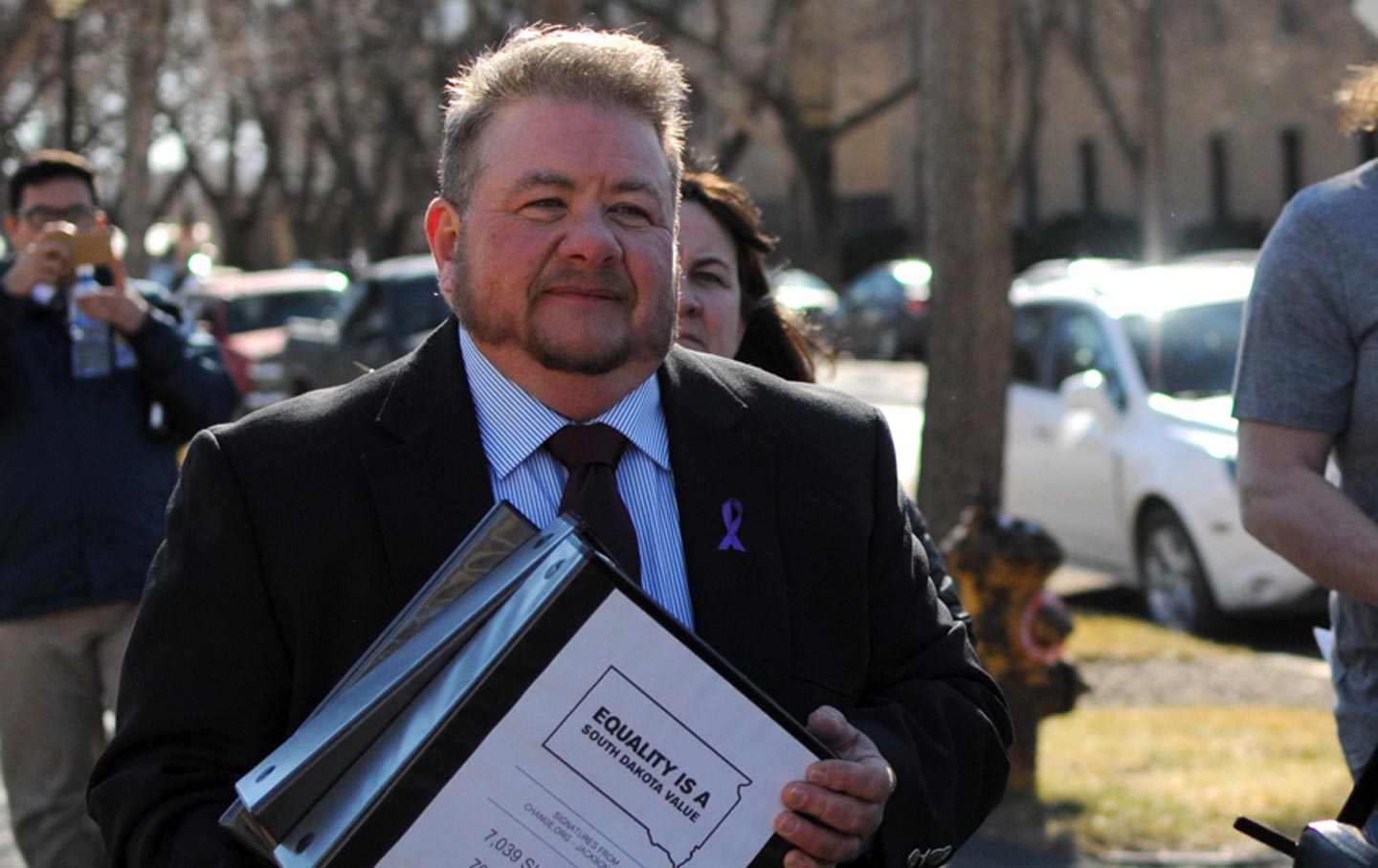 On Tuesday, South Dakota Governor Dennis Daugaard vetoed a bill that would have amounted to legislative bullying of transgender young people. House Bill 1008, which would have prohibited transgender students from accessing bathrooms, locker rooms, and showers that match their gender, was passed by South Dakota’s legislature on February 16. This was the first bill of its kind in the United States to make it to a governor’s desk, and the veto is heartening. But this is only the tip of the iceberg of the legislative attacks on trans people.

According to a new report from Human Rights Campaign, there are 44 anti-trans bills in the works in 16 states, double the number that were filed in the previous legislative session. Seventeen of the bills—including those in Illinois, Oklahoma, Massachusetts, Minnesota, and Virginia—place trans students in their crosshairs by focusing on bathrooms, locker rooms, or sports. Texas school officials signed off on a proposal last week to use birth certificates to determine a student’s gender and thus ban trans from participating in sports. Bills in Virginia would charge trans people $50 for using the bathroom that matches their gender. Charlotte, North Carolina, actually managed to pass a nondiscrimination ordinance last week, but Governor Pat McCrory has promised retaliation in the form of state legislation that would override Charlotte’s ordinance as well as LGBT nondiscrimination ordinances that any state jurisdiction tries to pass in the future. In fact, several state legislatures are considering bills to prevent cities, counties, and school districts from extending nondiscrimination protections to LGBT people. In January, the Republican National Committee approved a resolution endorsing bathroom bills in the states and called for rolling back the interpretation of Title IX, a federal law that protects trans students. The Obama administration has quietly extended protections to trans people through interpretation of existing law and, though this particular measure failed in South Dakota, the Republicans have made taking away these protections a major priority.

Laws like House Bill 1008 seem to be in clear violation of Title IX and could lead to a loss of federal funding for and lawsuits against schools. As Governor Daugaard noted when vetoing HB 1008, “this bill would place every school district in the difficult position of following state law while knowing it openly invites federal litigation.” That makes it obvious that this push is not about sound policy, but about whipping up a bigoted conservative base in a presidential election year by targeting some of the most vulnerable.

The mainstream success of TV shows and movies that claim to tell trans stories does not always mean more acceptance for trans people in real life.

The timing of this legislation is terrifying; 2015 saw the highest number on record of reported murders of trans women in the United States in a single year—most of them black or Latina and engaged in sex work or profiled as such—and the murders have continued in 2016, part of a global epidemic of violence that seems to have only worsened with the increased visibility of trans women. Trans people don’t need bullying politicians; they need actual protections and support. But the political climate is only getting worse. Conservatives have found that combating LGBT rights with panic about “men in women’s restrooms” has proved successful in blocking antidiscrimination legislation at the same time there is increased trans visibility. Polls have shown the bathroom bill approach as the perfect lightning rod issue for battling transgender rights, as the majority of Americans oppose trans people accessing the bathroom that corresponds with their gender. Yesterday, the Just Want Privacy Campaign announced it had filed paperwork for a ballot initiative to overturn what it calls “the Washington State Human Rights Commission’s bathroom rule.” Anti-transgender forces have spread rumors about trans students harassing their classmates in bathrooms, all of which have been disproved. Online, opponents of trans rights have suggested men enter women’s rooms and expose themselves or otherwise harass occupants. At least one man has already followed through on that attempt to prove trans women should not be allowed in women’s bathrooms. In South Dakota, a politician suggested “genital checks” to keep trans students out of gendered bathrooms. (That amounts to child abuse.) Even with the governor’s veto, HB 1008 succeeded as an act of bullying aimed at trans kids by the state legislature. Indeed, it is trans people who are harassed, bullied, and endangered by politicians who spread transphobia.

You might be surprised to hear that legislation, discrimination, and violence targeting trans people seems to be getting worse. After all, as Time magazine informed us in 2014, our culture is at “the transgender tipping point,” with trans people supposedly emerging from the margins to fight for their rights. Laverne Cox graced that cover of Time. Caitlyn Jenner’s very public transition has been lauded for increasing awareness of transgender people. Two days before HB 1008 passed the legislature, Eddie Redmayne, star of The Danish Girl, a film that tells the story of Lili Elbe, considered the first trans woman to medically transition, told the BBC, “It’s extraordinary how trans issues have come into the mainstream media since we made The Danish Girl.”

But visibility for trans people, and the mainstream success of TV shows and movies that claim to tell trans stories, do not always mean more safety and acceptance for trans people in real life. Many trans people I’ve spoken with have told me they felt more worried about being targeted in public after Jenner’s story brought so much focus on trans women. “So often, visibility uses the lens of respectability to determine who, even in the most vulnerable communities, should be seen and heard,” says Reina Gossett, activist in residence at Barnard College’s Center for Research on Women. “I believe that, through the filter of visibility, those of us most at risk to state violence become even more vulnerable to that violence.” Knowing a real trans person in your life is what leads to increased acceptance, not just being exposed to trans narratives through popular culture.

Some progressives argue that depictions of trans women in film and on TV are a start. But as narratives that reflect the reality and diversity of trans lives, three of the most visible representations of trans women in mainstream pop culture—The Danish Girl, Dallas Buyers Club, and Transparent—all fall short. Rayon, the transgender woman character in Dallas Buyers Club, represents a typical tragic trans narrative: She experiences numerous hardships and then dies to give the film’s straight male lead motivation. The Danish Girl takes liberties with Lili Elbe’s story; Rani Baker writes that the film follows the standard beats of cross-dresser porn, which is all about characters fetishizing women’s clothes rather than identifying fully as women. Critics have pointed out that Transparent is actually about protagonist Maura’s family dealing with something they wish wasn’t happening: her transition. As I have argued elsewhere, rather than combating the dehumanization of trans women, tragic depictions of trans women amount to what I call “negative visibility”—the reproduction of tired, dangerous stereotypes that perpetuate the othering of trans people instead of showing their humanity. Given the current backlash, the argument that any representation is good falls apart. Exposure does not necessarily do good for marginalized and victimized groups, especially when that exposure fails to humanize them by confirming existing negative stereotypes.

At first, Governor Dennis Daugaard said he had not met a trans person and would not do so before considering the bill. But following public outcry, the governor relented, and did meet with three trans people, including two students last Tuesday. Daugaard said the meeting “put a human face” on the impact of the bill and helped him “see things through their eyes.” After the meeting, 22-year-old Kendra Heathscott said, “He cares and he wants to understand, and I think that’s so amazing that he’s actually just gone out of his way to understand.” In Daugaard’s case, it seems that meeting with real trans students did what mere visibility could not.

We can thank the voices of real trans people for stopping this legislation—Governor Daugaard met with trans people because of a public outcry following HB 1008’s passage. But, as this wave of attacks continues across the country, it is well past time to challenge the notion that pop culture representations are always good—or enough to protect trans people from real discrimination and harm.