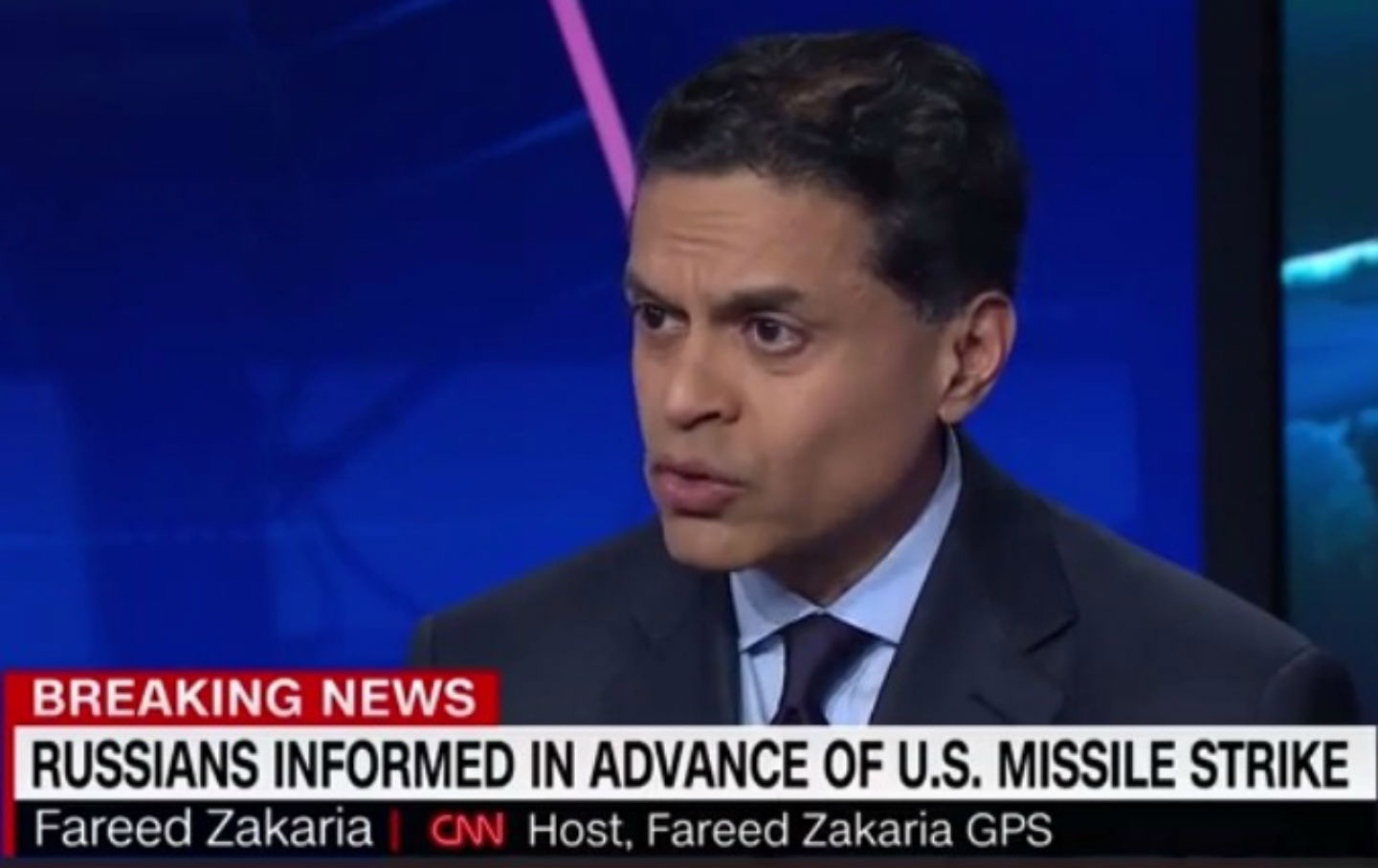 It shouldn’t be surprising, but it is to me nonetheless: Plenty of liberals who’ve long criticized Donald Trump as unfit to be president are praising his strike on Syrian airfields.

On CNN’s New Day Thursday, global analyst Fareed Zakaria declared, “I think Donald Trump became president of the United States” last night. To his credit, Zakaria has previously called Trump a “bullshit artist” and said, “He has gotten the presidency by bullshitting.” But Zakaria apparently thinks firing missiles make one presidential. On MSNBC, Nicholas Kristof, an aggressive Trump critic, said he “did the right thing” by bombing Syria. Anchor Brian Williams, whose 11th Hour has regularly been critical of Trump, repeatedly called the missiles “beautiful,” to a noisy backlash on Twitter.

While The New York Times posted several skeptical, even critical stories, it gave us this piece of propaganda: an article initially titled “On Syria attack, Trump’s heart came first,” buying the president’s line that his opposition to anti-Assad military action was reversed by seeing the heartrending photos of children struggling to breathe after a chemical attack.

“Even beautiful babies were cruelly murdered in this very barbaric attack,” Trump declared. “No child of God should ever suffer such horror.” (No word how he felt about ugly babies.) The piece also failed to even mention that Trump is keeping refugees from the Syrian war, even children, out of the United States. Victims of chemical weapons are “beautiful babies”; children trying to flee such violence require “extreme vetting” and an indefinite refugee ban. After a public outcry, the Times changed the headline.

Even some Obama administration veterans praised Trump’s action. “President Donald J. Trump was right to strike at the regime of Syrian President Bashar al-Assad for using a weapon of mass destruction, the nerve agent sarin, against its own people,” Antony Blinken, a deputy secretary of state under Obama, wrote in The New York Times. Blinken went on to say, correctly in theory, that what must come next is “smart diplomacy.” But he knows that Trump has shown himself incapable of doing anything smart, especially diplomacy.

Remember just last week, phantom Secretary of State Rex Tillerson said in Turkey: “I think the…longer-term status of President Assad will be decided by the Syrian people.” The Kremlin-funded Russia Today described that as “a U-turn from Washington’s long-held policy” that Assad must go. Six days later, Tillerson was telling reporters, “There is no doubt in our minds, and the information we have supports, that the Syrian regime under the leadership of Bashar al-Assad are responsible for this attack. It is very important that the Russian government consider carefully their support for Bashar al-Assad,” because “steps are underway” to muster international support for a strike. Russia Today seemed disappointed that the United States believes Assad is behind the gassing of his people, arguing that the source is the international rescue group White Helmets, which RT shockingly calls “al-Qaida affiliated.”

Any liberal who praises these missile strikes has to account for what comes next. Obviously, Trump cares little about diplomacy, leaving Tillerson out of key meetings and slashing the State Department’s budget. On Wednesday night, the White House released a photo of his team receiving a briefing on the Syria attack. Tillerson did attend that briefing, along with Commerce Secretary Wilbur Ross; Treasury Secretary Steve Mnuchin; Goldman Sachs alum Dina Powell, deputy national-security adviser; along with Jared Kushner; Steve Bannon; and Bannon’s sidekick Steven Miller. Why are the Commerce and Treasury secretaries there, but not CIA Director Mike Pompeo?

The noisiest outrage against the Syrian attack isn’t coming from the left, but the right—particularly the alt-right. Trump’s noninterventionism and his friendliness to Bashar Assad and Vladimir Putin were big selling points to white nationalists. Now that he seems to be challenging both men, his former acolytes are enraged. On Twitter, alt-right white supremacist Richard Spencer called it a “total betrayal”; the white nationalists at VDARE blamed it on the “boomercucks” in the administration. Ann Coulter went apoplectic:

Trump campaigned on not getting involved in Mideast. Said it always helps our enemies & creates more refugees. Then he saw a picture on TV.

It was disappointing to see Hillary Clinton say Wednesday afternoon that she thought air strikes on Syrian airfields were an appropriate response to the chemical-weapon attack. She was always more hawkish than I wished, and that shows it. But it’s wrong to insist she’d have done the “same thing” as Trump. Clinton’s secretary of state wouldn’t likely have told Assad we were no longer concerned about removing him; if she did fire missiles at Syrian airfields, she would have done so with a clearer notion of what comes next. Trump appears to be clueless.

Senator Bernie Sanders, meanwhile, didn’t quite oppose the Syrian strike, calling Assad a “war criminal” and lamenting his murder of civilians with chemical weapons. But noting that “it’s that it’s easier to get into a war than get out of one,” Sanders demanded that Trump “must explain to the American people exactly what this military escalation in Syria is intended to achieve, and how it fits into the broader goal of a political solution, which is the only way Syria’s devastating civil war ends.”

Senator Kirsten Gillibrand sounded closer to Sanders than Clinton on the airstrikes, decrying Trump’s “unilateral military action by the US in a Middle East conflict” as well as “the absence of any long-term plan or strategy to address any consequences from such unilateral action.” Like Sanders, she demanded that Trump seek authorization of military force from Congress. By contrast, her New York colleague Minority Leader Chuck Schumer called Trump’s move “the right thing to do.” Schumer may find that many constituents think it was the wrong thing.

There remains the possibility that some of this is theater. It should be said: Some observers, besides RT, say it’s unproven that the chemical weapons attack came from Assad; rebels could be behind it. There’s also the possibility of a kabuki performance from Trump, Putin, and Assad. We already know the United States warned Putin of the coming missiles, and that Putin warned Assad, whose military moved airplanes and other military equipment away from the intended target. Trump, plummeting in the polls, his domestic health-care and tax plans on the rocks, the investigation into Russian election meddling closing in on his team, really needed a boost; maybe they gave it to him. Trump’s sudden about-face on Syria makes it hard to judge.

However, according to Syrian state media, nine civilians, including four children, were killed in the air strikes. That is not kabuki. Trump has said nothing about those “beautiful babies,” nor will he. Liberals have to sober up and stop being besotted by beautiful missiles and presidential cruelty. Trump is the same Trump he was Tuesday, and that should scare all of us.

Editor’s note: An earlier version of this piece incorrectly stated that Secretary of State Rex Tillerson was not part of the team that received a briefing on the Syria attack on April 5. Tillerson was there, but CIA Director Mike Pompeo was not. The piece has been updated.