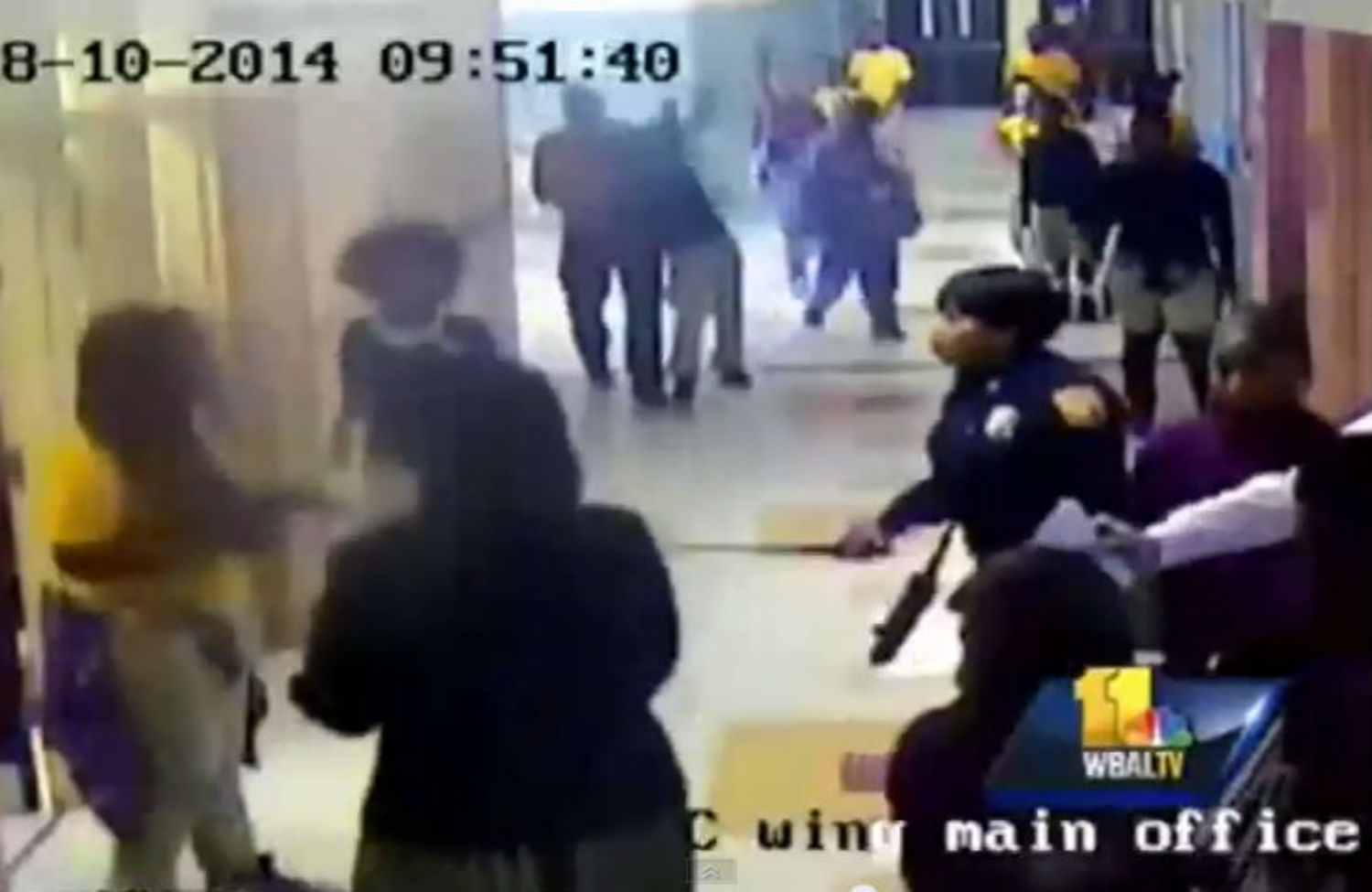 A surveillance video from a Baltimore middle school shows a police officer chasing a student with a baton. (WBAL-TV)

In a video from a Baltimore middle school released last week, a girl is summoned down a flight of stairs by a school police officer. After what appears, from the video, to be no more than a few seconds, she descends the steps but walks quickly past the cop, apparently ignoring a demand that she stop. The officer pins her against a wall, and soon the girl’s sister and later a third black girl—their cousin—rush in to intervene, crowding in and trying to get the officer to loosen her grip. The officer, a woman, runs after the cousin and hits her at least twice with a baton, bloodying that girl’s head so badly she will later need stitches. The officer, unprovoked and apparently angered by their refusal to accept her authority, then sprays the other two girls in the eyes with pepper spray.

Following the events on the video, the three girls were rushed to the hospital for treatment and then taken by police to Baltimore’s juvenile justice center, where they were charged with assaulting the officer. Those charges were dropped once the prosecutor viewed the video, but the girls were all suspended. The officer was reassigned to administrative duty.

According to a report released Wednesday, incidents such as these in which black girls are subject to harsh, apparently unwarranted school discipline and end up in the juvenile justice system are much more likely than the existing research and public conversation about the school-to-prison pipeline suggest. Concern and interventions focus largely on boys of color, particularly black boys. But according to the report, titled “Black Girls Matter: Pushed Out, Overpoliced and Underprotected,” black girls are also disciplined at disproportionately high rates compared to white girls and, as a result, are excluded from opportunities to learn. Black boys are suspended more than three times as often as white boys, and often that statistic is held up as sole proof of a problem. But if black girls are suspended six times more often than white girls, which data analysis in this new report finds, then why and what can be done to reduce that disparity?

The report, authored by the African American Policy Forum in collaboration with Columbia Law School, looked at 2011–12 school year data collected by the Department of Education’s Office of Civil Rights and found:

The report goes beyond simply reporting the problem and recommends solutions, such as training teachers how to work with students traumatized by violence and sexual assault and recognizing that girls have needs that can differ from boys’ and so demand specially tailored solutions. “This cannot be a trickle-down affair,” Kimberlé Crenshaw, a legal scholar and one of the report’s authors, said Wednesday on a call to announce its release.

As for the problems girls face at school, some of these were explored in depth in a New York Times article late last year that examined the same Office of Civil Rights data for insight into race, gender and school discipline. According to that story, intraracial disparities exist as well. “Researchers say that within minority groups, darker-skinned girls are disciplined more harshly than light-skinned ones,” Tanzina Vega reported. Vega focused on a district in Georgia where a 12-year-old black girl was accused of criminal trespassing after writing graffiti in a school bathroom. The girl’s friend, who was also involved and is white, faced no such charges because her family was able to pay $100 in restitution.

But the difference in how white and black girls are disciplined often isn’t just about who has the money to buy their way out of harsh punishment and who doesn’t. Making a decision about whether and how to discipline a student is subjective, so biases around race and gender creep into calls educators have to make every day. According to the African American Policy Forum report, the girls interviewed in focus groups believed their teachers and school counselors often perceived them as “loud and rowdy, ghetto,” and so relied on harsh discipline practices as a way to counteract and try to root out those behaviors.

Last fall, I interviewed educator and scholar Monique Morris for a story I was reporting about how teachers can address behavior problems without turning to suspensions or otherwise pushing students out of the classroom. Morris, who’s working on a book on the criminalization of black girls in schools, has conducted interviews and run focus groups across the San Francisco Bay Area and in Boston, New Orleans and Chicago with students who have struggled in or been ousted from the traditional school system. She said sometimes teachers and administrators think they’re doing something innocuous by teaching girls to be ladylike or to meet some other standard of femininity—by sending a girl wearing short shorts home or requiring that she stay in the office, for example—when in reality they’re doing harm.

“They try to police girls’ sexuality in ways that really just marginalize them from the school environment,” Morris said. “In an attempt to try to show love and maybe even engage with the young women, they end up pushing them away and criminalizing their behavior in ways that are unnecessary.” Instead, these are moments when educators should focus on boys’ inappropriate behavior rather than solely blaming that behavior on the way a girl dresses, she said.

The NAACP Legal Defense and Educational Fund and the National Women’s Law Center have organized a congressional briefing on improving educational outcomes for black girls, including how to reform zero-tolerance discipline policies to avoid school pushout. The event is February 11 in Washington, DC, and open to the public.