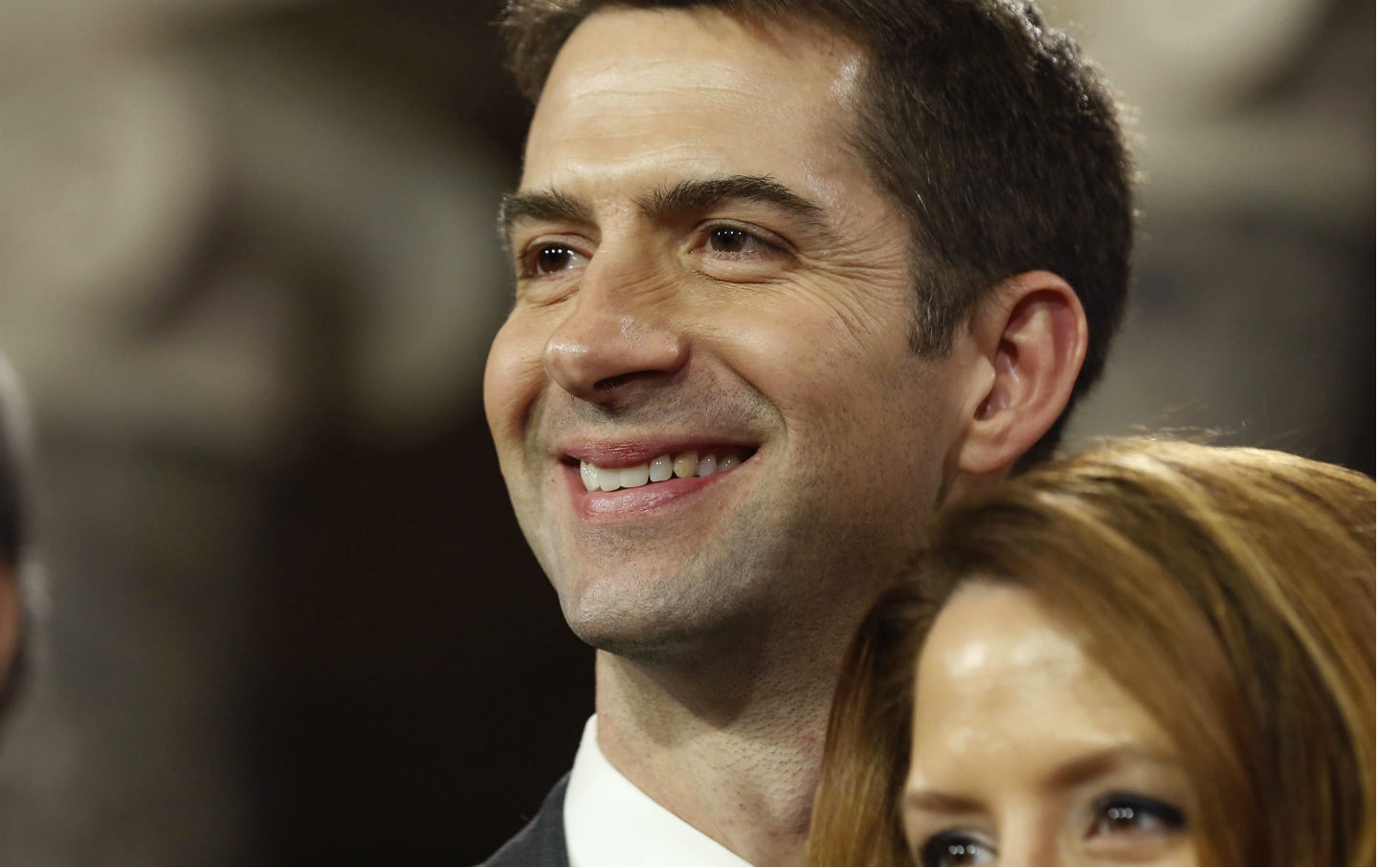 Last we heard from Tom Cotton, he was marshaling most of his Republican Senate colleagues into a widely ridiculed letter to Iran, trying to rile up the Islamic Republic's hard-liners to oppose a nuclear deal with President Obama. Whereas other opponents of a deal couch their opposition in hopes for a unicorn "better deal," Cotton had been explicit about his aim of killing talks.

What's his alternative to negotiations? The freshman senator form Arkansas has been shy on this front: he's stopped short of directly calling for military strikes on the Islamic Republic. But in an appearance on a religious right radio show on Tuesday, Cotton suggested he doesn't think a new war would be such a big deal.

Here's BuzzFeed's transcript of the relevant bits of Cotton's remarks:

Even if military action were required—and we certainly should have kept the credible threat of military force on the table throughout which always improves diplomacy—the president is trying to make you think it would be 150,000 heavy mechanized troops on the ground in the Middle East again as we saw in Iraq and that’s simply not the case.

It would be something more along the lines of what President Clinton did in December 1998 during Operation Desert Fox. Several days air and naval bombing against Iraq’s weapons of mass destruction facilities for exactly the same kind of behavior. For interfering with weapons inspectors and for disobeying Security Council resolutions.

There's a lot wrong with this (more on which in a moment), but the first thing to note, as the analyst Matt Duss quickly did, is that Cotton's formulation—Attacking Iran? NBD!—smacks of the prediction neoconservative hawks made about the Iraq war: that it would be a "cakewalk." Astoundingly, given how that war played out, this isn't the first time neoconservative ideologues have dismissed the complexity, difficulty and potential consequences of a new war against Iran.

The first notable salvo downplaying a future war came from then-Senator Joseph Lieberman, who declared in 2010 that an attack on Iran's nuclear facilities wasn't a war at all, despite the clear implications of dropping bombs on a foreign country. "We're not talking about a war, because nobody is talking about invading Iran," Lieberman said.

These are but a few examples; other neoconservatives, too, have routinely downplayed the potential consequences of an attack—sometimes, as pundit Lee Smith has, denying the broad consensus of the American defense community and military brass that a strike would only delay Iran's nuclear program.

That Cotton—a protégé of Bill Kristol whose campaign enjoyed an almost $1 million ad buy thanks to Kristol's hardest-line letterhead group—would follow neoconservative suit on the ease of an Iran war shouldn't be surprising. Nor should it be that his case is based on head-spinning historical revisionism.

Let's plug a few of the holes in Tom Cotton's narrative of Operation Desert Fox. The attacks of the late 'nineties only came after Iraq violated the conditions imposed on it after defeat in 1991's Gulf War (a full-scale invasion). Then came Desert Fox—the relative ease of which was aided by the destruction of Iraq's military and years of no-fly zones. Then neoconservative ideologues argued that Clinton's brief war, just like Bush Sr.'s Gulf War, hadn't gone far enough in that it didn't force regime change. Clinton's weakness, one neocon bogusly argued (we now know), forced Saddam Hussein in to Osama Bin Laden's hands. Therefore, the second Iraq war—the costly, bloody quagmire that we were promised would be a "cakewalk"—became necessary. "There were no inspectors left to investigate" whether Clinton's strikes had really destroyed Hussein's WMD programs, argued Kristol and his comrade Bob Kagan in a 2004 Weekly Standard article patting themselves on the back for pushing the war.

Of course, Iran has stymied some inspections, but by-and-large international inspectors are today operating there and would, in the case of the deal Cotton and his hawkish allies oppose, be given a much broader mandate. (Decrying the framework for talks agreed to last week, Cotton, amid blowing a few more facts, complained that the deal will do nothing to staunch Iran's non-nuclear malfeasance in the region—something a few days of targeted strikes on Iran's nuclear sites are sure to exacerbate, not help, though Cotton on Tuesday made no mention of Iranian retaliation whatsoever.)

What's more, if the US or Israel were to attack Iranian nuke sites, that could very well spur Iran to do something, according to American and Israeli intelligence estimates, it hasn't yet: make the decision to build a bomb. But don't take my word for it: two former top security chiefs from Cotton's favorite country, Israel, have explicitly made this point.

That scenario presents a problem for hawks like Cotton, though he and many others scrupulously avoid making the stakes of what they're discussing clear. Only one neoconservative that I've seen was honest enough to explain. In the Washington Post last month, Joshua Muravchik wrote that the solution for dealing with Iran's reconstitution of its program after an attack was simple: just bomb again and again (nevermind that the task will be more complicated with the Iranian program driven underground). The Israelis call this "mowing the lawn," a euphemism for perpetual war. No wonder Cotton and his comrades don't bring it up very much; to do so would show their plan for attacking Iran would be anything but a cakewalk.