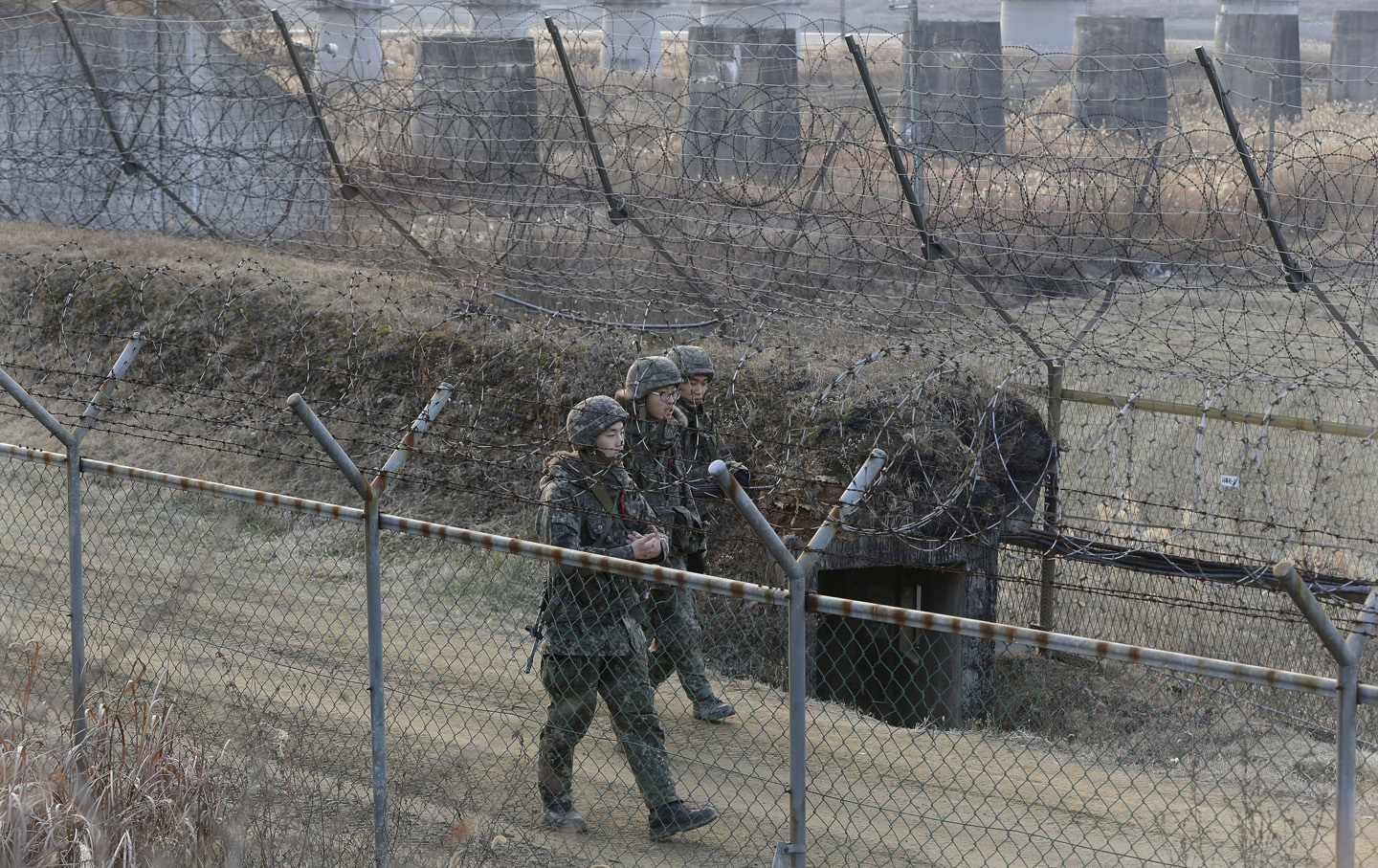 Editor’s Note: This piece is cross-posted from Foreign Policy In Focus.

North Korea announced recently that it had successfully detonated its first hydrogen bomb. “This test is a measure for self-defense,” state media announced, “to firmly protect the sovereignty of the country and the vital right of the nation from the ever-growing nuclear threat and blackmail by the US-led hostile forces.”

South Korea, Japan, and China were swift to respond with condemnation, as was the UN Security Council, which issued a statement that North Korea’s test was a “clear violation of Security Council resolutions” and resolved to take “further significant measures.”

Many observers, however, including nuclear-weapons experts and government officials, doubt whether North Korea really did test a hydrogen bomb.

“I don’t think this was a hydrogen bomb,” said Bill Richardson, a former diplomat who’s traveled to North Korea. “It was apparently six kilotons. A hydrogen bomb is 20.” The White House also issued a statement saying that data collected by US intelligence was “not consistent” with a hydrogen-bomb test.

While an independent verification may take days, and the world may never fully know the true extent of North Korea’s nuclear capacity, what we do know is that this would be Pyongyang’s fourth nuclear-weapons test since 2006—and the third under President Obama’s watch.

If anything, this proves the utter failure of the Obama administration’s policy of “strategic patience” when it comes to achieving North Korean de-nuclearization.

Why now—especially when the door to inter-Korean talks has been open since August, when the two countries struck a deal to ratchet down tensions?
One reason is that North Korea sees its time running out to reach a deal with the Obama administration. “North Korea’s latest nuclear test is a response to the growing and worrisome trend of hardline foreign policy of the United States in Northeast Asia,” argues Korea policy analyst Simone Chun.

Chun cites this assessment from the Council on Foreign Relations: “Resolving the current standoff will probably become more difficult after Obama leaves office, as the next administration, no matter who wins the 2016 presidential election, is likely to be more hardline in its foreign and defense policy.”

An exacerbating factor may be the recent rapprochement between North Korea’s rivals South Korea and Japan over the “comfort women” conflict—a long-running dispute over whether Japan must atone for its sexual enslavement of Korean women during World War II. The North likely sees the recent deal—in which Tokyo offered Seoul an $8.3 million settlement for surviving South Korean “comfort women” in exchange for South Korea’s silence on the issue—as a bold step by Washington to line up its allies in the region for its “pivot” to Asia, which aims to move 60 percent of US naval and air power to the Asia-Pacific region by 2020.

The South Korean and Japanese foreign ministers announced on December 28 that they’d resolved the “comfort women” issue. Yet their agreement was an affront to the Korean grandmothers who’ve valiantly spoken out for decades about the Japanese military’s horrendous acts of sexual violence. Not only were these halmonis not informed about the deal, the settlement fund amounts to a paltry $180,000 per survivor—without even going directly to them. The deal would silence halmonis from speaking out in international forums, including at the United Nations.

Furthermore, Japan didn’t offer the formal apology the halmonis have demanded, and Tokyo has insisted that South Korea won’t be able to collect unless it removes the bronze girl statue that civic groups installed in front of the Japanese embassy. No wonder the Korean Council for the Women Drafted for Military Sexual Slavery in Japan called the bilateral deal “diplomatic collusion” that “thoroughly betrayed the wishes of comfort women and the South Korean people.”

Washington played a heavy hand in ensuring that this deal went through.

According to the Korea Herald, President Obama “made clear to South Korea that it’s in their interest to address this issue and have good relations with Japan.” The deal, the paper continued, “removed the biggest thorn in relations between Seoul and Tokyo, and offered hope for significant progress in US efforts to forge stronger security cooperation with the two allies in a region marked by a rising China.”

K.J. Noh, an activist and scholar who writes about Korea, explains further that US plans to check China rely heavily on the cooperation of South Korea and Japan:

Key to the pivot is the Korean-Japanese military/political alliance to challenge, contain, threaten, and if necessary take down China: If push comes to shove, Japan is the “unsinkable aircraft carrier,” and South Korea is the “beach head” or “frontage road.”

Should war be in the cards, all South Korean troops, equipment, and bases fall under US command by the status of forces agreement. Japan has just nullified its peace constitution and upgraded its military agreements with the US to allow it offensive capacity anywhere in the world.…Now with [the comfort women issue] out of the way, the pivot can proceed as planned.

North Korea, of course, plays a brilliant boogeyman to justify greater US militarization in the region—even if it’s aimed ultimately at China.

According to The Wall Street Journal, “U.S. officials heralded the agreement as a breakthrough that improves coordination between its allies in Northeast Asia against the military threat from North Korea and China’s increasing assertiveness. A senior US official said it was as strategically important for Washington as the 12-nation Trans-Pacific Partnership trade deal.”

Many Americans don’t realize that the Korean War, often known as the Forgotten War in the United States, never actually ended.

The 1953 armistice that halted the fighting was supposed to be followed within 90 days by talks for a formal peace treaty. Over 60 years later, however, the Korean War still isn’t over. The result is intense militarization, recurrent military clashes, and the threat of dangerous miscalculation, which could lead to the annihilation of the Korean peninsula. Moreover, three generations of Korean families remain tragically divided.

Amid the ongoing conflict, Washington has tried a combination of isolating North Korea through international sanctions and flexing its military might through joint military exercises with allies. Journalist (and frequent Nation contributor) Tim Shorrock wrote in Salon about the 2013 military escalation between Washington and Pyongyang:

In a show of force not seen in East Asia for decades, the United States, as part of a series of war games with South Korea, dispatched B-52 and stealth B-2 bombers capable of devastating nuclear and tactical strikes screaming across Korean skies. F-22 warplanes, perhaps the most advanced in the U.S. arsenal, are there too, along with two guided-missile destroyers. A new THAAD portable missile defense system is being deployed to nearby Guam as a “precautionary” measure against possible North Korean missile strikes, and plans are underway for a massive expansion in U.S. missile defense systems in Alaska and the West Coast. Meanwhile, U.S. and South Korean troops practice simulated nuclear attacks and even regime change in their massive military drills, which both governments described as “defensive.”

Drills like these are especially alarming to the North, which still bears the scars of US bombing campaigns from the war. Ji-yeon Yuh, a Korea historian and professor at Northwestern, describes the destruction like this:

In just three years, the United States dropped 635,000 tons of bombs [on North Korea], including 32,557 tons of napalm. This tonnage is greater than that which was dropped during the entire Pacific campaign of World War II and more napalm than was used during the Vietnam War. Both journalists and American POWs reported that virtually the whole of North Korea had been reduced to rubble. In November of 1950, the bombing had decimated housing so severely that the North Korean government advised its citizens to dig into the earth for shelter.

Against this backdrop, an exchange of regime change drills and new nuclear tests is a recipe for escalation. Yet instead of striking a deal to halt or reduce North Korea’s nuclear capacity, the Obama administration has allowed it to flourish.

It’s time for a new approach.

What President Obama hasn’t tried yet with North Korea is true engagement. We need our leaders to sit down, talk, and come up with a peace deal that leads to greater security for all of us. Although North Korea has appealed to the United States for a peace treaty for decades, it extended a new olive branch to Washington starting in October, requesting peace treaty talks to formally resolve the Korean War.

That’s the most judicious course of action to halt North Korea’s nuclear program. The best prospect for a nuclear free Korean peninsula is one no longer at war.

In July, three US congressmen and veterans of the Korean War—Charles Rangel (D-NY), John Conyers (D-MI), and Sam Johnson (R-TX)—took Washington a step closer by introducing a bipartisan resolution, HR 384, calling for an end to the Korean War. It’s time for the White House to take them up on it.

President Obama should build upon his diplomatic victories with Iran and Cuba—and make 2016 a year of peace by ending the longest standing war with North Korea.