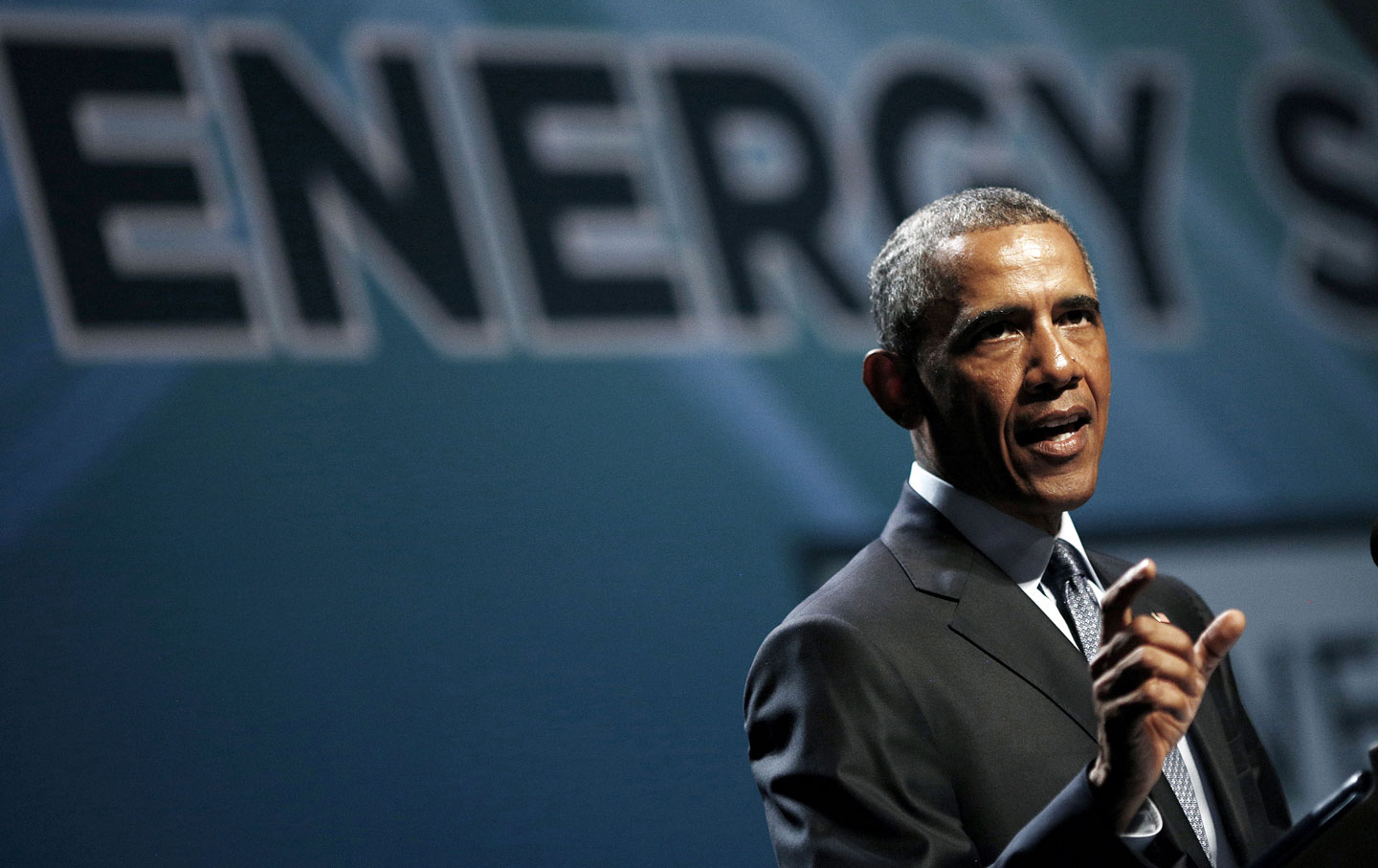 The question is neither casual nor rhetorical, not when it comes to Obama and the climate crisis. Like the fictional case of Dr. Jekyll and Mr. Hyde, Obama from the day he was first elected president has repeatedly said and done impressive things one day, only to turn around and say—and more importantly, do—appalling things the next. His current climate-change speaking tour is the latest case in point. Environmentalists swooned when the president, in a speech in Las Vegas on Monday, called out the Koch brothers for their free-market hypocrisy in opposing solar energy. But a review of Obama’s own climate record over the past seven years suggests he should be careful about calling the kettle black.

On Election Night 2008, Obama pledged to make “a planet in peril” one of his top three priorities as president. Once in office, his economic stimulus package gave a huge boost to renewable energy and he sharply raised fuel-efficiency standards for cars and trucks. But he also backed a cap-and-trade bill that at best would have cut emissions nationwide by a measly 4 percent. Then he didn’t bother to champion even that weak measure, helping to insure its defeat. Stung, the president went mute on the climate threat for the rest of his term, even as he crowed about an “all of the above” energy policy that made the United States the world’s leading oil and gas producer.

Obama’s “all of the above” energy policy has made the US the world’s leading oil and gas producer.

More of the same zig-zagging followed in Obama’s second term, but rarely has his climate incoherence been more evident than during the past month—and it’s poised for a crescendo in the days ahead. On August 27, the president visits New Orleans, a city that history should remember as the first great American casualty of the climate change era, to mark the 10th anniversary of Hurricane Katrina. On August 31, he flies to Alaska to discuss the impacts of climate change in the Arctic.

Except for South Florida, it would be hard to find two locations in the United States more vulnerable to the effects of rising temperatures than New Orleans and Alaska. Ice in the Arctic is already melting much faster than scientists had projected; James Hansen, the former NASA scientist who put climate change on the international agenda 25 years ago, recently published a study finding that melting ice could swell sea levels a staggering ten feet higher by century’s end if greenhouse-gas emissions are not cut much faster than planned. Ten feet of sea-level rise would render not only New Orleans and Miami but also New York, Washington, London, Tokyo, Hong Kong, and many other coastal cities effectively uninhabitable.

So what is the Obama administration doing? Green-lighting new oil drilling in the Arctic! On August 17, Obama’s Interior Department, through its Bureau for Safety and Environmental Enforcement (a name to make Orwell wince) gave Royal Dutch Shell Oil the permit needed to start drilling off the coast of Alaska.

Never mind the administration’s own studies concluding that there is a 75 percent risk of an oil spill if such offshore leases are developed; never mind that Shell made a huge mess of it last time it drilled in the region, in 2012, when it was forced to withdraw after an embarrassing series of accidents; never mind that polar bears, reindeer, and other iconic Arctic species are already under severe threat of extinction. The unavoidable damage to the climate alone should suffice to rule out further drilling in the Arctic. If humanity is to limit global temperature rise even to 2 degrees Celsius, as Obama got world leaders to agree at the Copenhagen climate summit in 2009, the science is clear: All Arctic oil—and in fact, at least two-thirds of all remaining oil, gas and coal on earth—must be left underground.

Which calls to mind a second indefensible—but much less publicized—climate policy of the Obama administration: continuing to allow, indeed subsidizing, coal mining in Wyoming’s Powder River Basin and other parts of the West. Halting all fossil-fuel production on the publicly owned lands of the United States would keep an estimated 450 billion tons of carbon pollution in the ground—equivalent to the annual CO2 emissions of 118,000 coal-fired power plants, according to a study commissioned by the Center for Biological Diversity and Friends of the Earth. And the president could make that happen with a swirl of his executive-order pen.

Is Mr. Obama unaware of the underlying science? Not at all. The president affirmed his understanding of the two-thirds imperative in a 2012 interview, saying, “We can’t burn it all.” So how can he now allow his Interior Department to approve Arctic drilling and then have the nerve to come to Alaska to talk about climate change? Does he not see the contradiction? Not care? Activists mobilizing against Shell’s Arctic operations are using the slogan, “Shell No!” Just as apt might be, “WTF?!?”

Rarely has Obama’s climate change incoherence been more evident than during the past month.

“Don’t let the perfect be the enemy of the good,” Obama has been known to admonish those to his political left. If reporters were to press the president on these contradictions when he visits New Orleans and Alaska, he likely would repeat what an aide asserted on Monday: that Shell is drilling only one well, and it’s important that the United States reduce its dependence on foreign oil. And then he could pivot to extol the virtues of his Clean Power Plan, the regulations his Environmental Protection Agency issued August 1. This plan, which targets pollution by US power plants, is the final version of a proposal originally released in 2013. The new version was applauded by most (though not all) environmental groups and by important parts of the mainstream media; channeling Obama’s own description, a Times editorial called it “the strongest action ever taken to combat climate change.”

Which is quite a reach, as Michael Grunwald pointed out in Politico. It is undeniably a good thing that the Clean Power Plan will require the electric power sector to reduce its greenhouse gas emissions 32 percent from 2005 levels by 2030; likewise, it represents progress for coal to decline to 27 percent of the national electrical grid’s capacity while solar, wind and other renewable energy sources surge to 28 percent. But these reductions are far less than what the 2 degrees target demands, a fact masked by the administration’s continuing habit (again dating back to his first days in office) of moving the goalposts on climate policy. If one substitutes the scientifically proper baseline of 1990 for the more forgiving 2005, the claim of 32 percent reductions shrinks to a mere 13 percent (see Figure 12 in that link).

The science is clear: All Arctic oil—and at least two-thirds of all remaining fossil fuels—must be left underground.

More baffling, the growth in renewable energy touted in the Clean Power Plan is far less than what the real world is already indicating can be achieved. The costs of wind and solar have plummeted in recent years—as Obama himself emphasized in his Las Vegas speech and for which his 2009 economic stimulus package deserves great credit—enabling the two to become the fastest growing energy sources in the world. Wind in particular could displace not only coal but also natural gas as America’s primary electricity source if “near-future” technology gets deployed, a new study by the US Department of Energy’s National Renewable Energy Laboratory concluded.

Add up all of these oddities and the astonishing conclusion is that, under the Clean Power Plan, “the rate of decarbonization [of the US economy] is expected to slow over the next 15 years,” writes Grunwald (emphasis in original).

To paraphrase the old TV game show, “Will the real Barack Obama please stand up?” In one of his many inspiring remarks on the climate crisis, Obama spoke as a father, warning that someday our kids and grandkids will ask whether we “did all we could” to preserve a livable planet for them. Perhaps not even Obama himself can say what has kept him from doing all he could as president: political calculation? Big Oil’s muscle? His personal preference for cooperation over confrontation? Regardless, the day of reckoning is surely coming, and trying to have it both ways doesn’t get the job done.