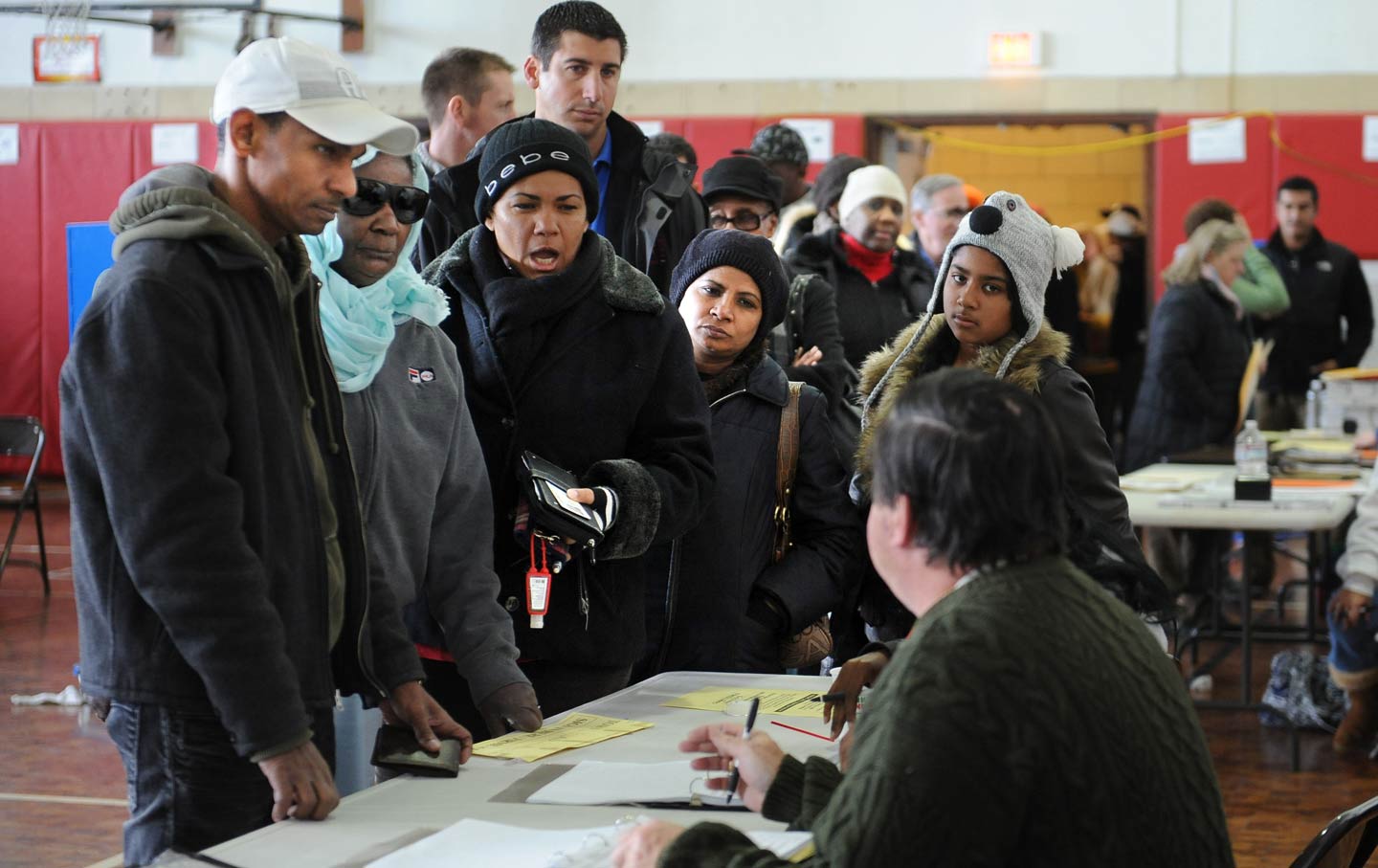 In June 2013, North Carolina passed the most sweeping voting restrictions in the country, requiring strict voter ID, cutting early voting and eliminating same-day registration, pre-registration for 16 and 17-year-olds, and out-of-precinct voting, among other political reforms. The state defended its cutbacks in court last summer by invoking, of all places, New York.

It was a cynical defense of North Carolina’s law—North Carolinians don’t deserve to suffer because a state 500 miles away has different laws—but it was still unnerving to hear a Southern state invoke a progressive Northern state to rationalize making it harder to vote.

The fact is, New York does have some of the worst voting laws in the country.

New York has no early voting (unlike 37 states), no Election Day registration (the state constitution requires voters to register no later than 10 days before an election), and excuse-only absentee balloting (voters have to prove they’ll be out of town or have a disability.)

The voter-registration deadline for the April 19 primary closed 25 days beforehand, when no candidate had even campaigned in New York, and independent or unaffiliated voters had to change their party registrations by October 9, 193 days before April 19, to vote in the closed Democratic or Republican primaries. This will disenfranchise nearly 30 percent of New Yorkers, including, most famously, the Trump children, who didn’t change their registrations from independent to Republican in time.

It’s easy to poke fun at the ignorance of Trump’s kids, but 3 million registered New Yorkers won’t be able to vote in the state’s primary because they are not affiliated with the Democratic or Republican parties. Election Day voter registration, which also increases voter turnout by up to 10 percent, would solve this problem.

Moreover, New York is holding three primaries this year, as Chris Hayes noted—April 19 for president, June 28 for Congress, and September 13 for state and local offices—which seems designed to keep voter turnout low for local elections. New York ranked 44th in voter turnout in 2012 and similarly low on the Center for American Progress’s “Health of State Democracies” index, receiving a D- for accessibility to the ballot.

.@chrislhayes explains why Ivanka Trump is right about voting in NY – it's a disaster. #inners https://t.co/PBfcSdBdIt

New York’s restrictive voting laws hurt voters across the political spectrum, but could have a particularly chilling effect on younger Bernie Sanders supporters. “Thirty-seven percent of voters under the age of 30—the Vermont senator’s core group of supporters—aren’t registered to a political party in New York City,” writes Russell Berman in The Atlantic. There’s a good chance a surge of non-affiliated voters will show up at the polls on Tuesday, only to be turned away. (Hundreds of New Yorkers have also filed suit because their registrations have mysteriously changed from Democratic or Republican to not affiliated or independent.)

New York has a divided legislature, and incumbent politicians in both parties have resisted calls for electoral reforms (while ranking as the most corrupt state in America, with the former leaders of both houses indicted). Governor Andrew Cuomo called for early voting and automatic registration in his 2016 State of the State address, but neither chamber of the legislature advanced the proposals. “The key to reforming our government is engaging people in the democratic process,” Cuomo said. “So why do we make it so difficult for the people to participate?”

To its credit, New York does not have a voter-ID law and is not aggressively suppressing the vote as are red states like Wisconsin and Texas, but nor is it expanding voting rights as are blue states like Oregon and California, which have recently adopted bold reforms like automatic registration.

“New York has not embraced the momentum for reform that we’re seeing in other states,” says DeNora Getachew of the Brennan Center for Justice.

In 2016, 422 bills were introduced or considered in 41 states to improve voter access, according to the Brennan Center, an encouraging counterpart to the 17 states with new restrictions on the books.

New York is the fourth-bluest state in the country, according to Gallup. It should be a leader on voting rights, not a laughingstock.