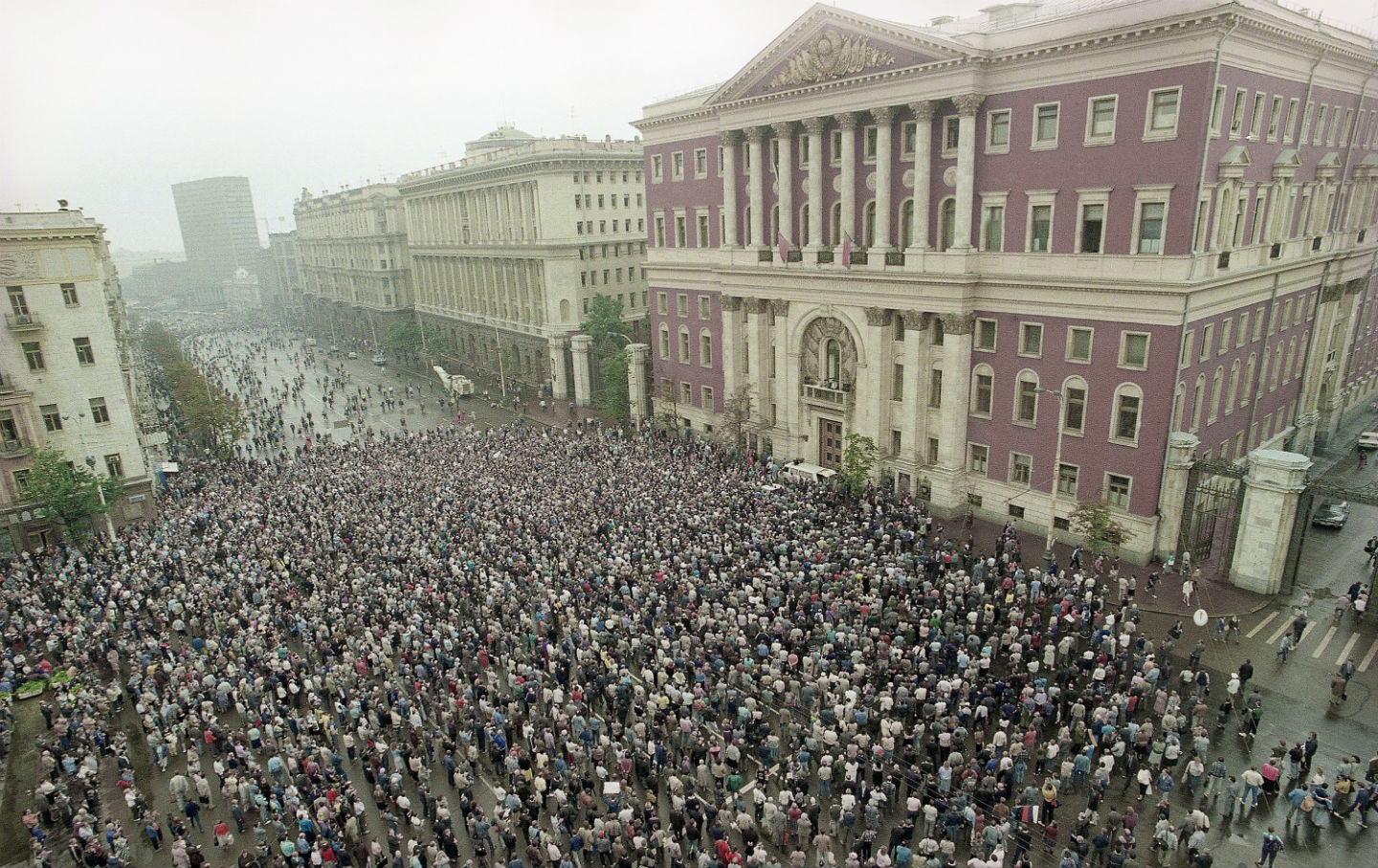 Twenty-six years ago people in Russia came out to defend democracy and their dreams of justice. Today it seems they’re trying to forget that.

The events of August 1991 concluded a turbulent and emotional period of perestroika, opening the door to a new, unknown period of development for the country and, in many ways, for the world around it, changing the alignment of power on the international arena and introducing fundamentally new forces and people. Contemporary Russian history, according to most analysts, began a bit before the formal disappearance of the USSR from the political map in December 1991. It was formed definitively during three days, August 19–22, when the state of emergency declared by a group of Gorbachev’s ideological opponents in the Soviet regime and the arrest of Gorbachev, who was then vacationing in Foros in Crimea, elicited a wave of civil disobedience that brought tens of thousands of people onto the streets of Moscow and other major cities prepared to defend Russia’s young democracy and their dream of freedom and justice.

For the last 26 years, people have considered those days in different ways. The intonations changed—from the enthusiastic and heroic in the years right afterward to the calm and tired, with notes of disillusionment, in the early 2000s. Many of the dreams did not come to pass, the long-awaited market did not bring prosperity, but instead high drama and economic collapse, from which we never fully recovered, and the power of law and justice remained an unattainable ideal, the oligarchs and the officials and bureaucrats who replaced them turned mass media into their own tools of influence, and the two conflicts in Chechnya left a deep scar.

The sociological surveys taken on the 20th anniversary (2011) found that many of the participants in the defense of the White House (the building of the Russian Federation government in Moscow) responded that they were not sure if they would have defended it knowing what would happen in the country later.

In 2016, on the 25th anniversary, the heroic intonations were totally gone. Moreover, many popular television newsreaders on national channels said that perhaps the putsch leaders had been right and the liberal leaders wrong, or simply deceived by their Western partners. A few years ago such statements were made only by marginal figures whose appearance on national television had been arranged. Over the last year, there are many more such voices. Liberalism and liberals over the last few years are depicted negatively in Russian propaganda, juxtaposed with ostensible exemplars of real patriotism, who defend statehood and order.

On the eve of this anniversary, people are saying louder than ever that resisting the putsch had been a mistake, as was the course for democratization and convergence with West and the rejection of military and ideological confrontation. “Soviet” rhetoric and the seemingly forgotten methods from the Cold War arsenal have become quotidian, and the anti-American and anti-Western discourse is accompanied by a search for ideological support in the statehood of the former Great Russia and the “superpower” USSR, which is presented in popular programs as the natural successor to the tsarist empire. The mix of imperial and Soviet symbols and archetypes bothers no one now, since both support the idea and practice of a powerful state that creates fear and therefore respect.

The latest opinion polls are shocking: Russians today consider the most significant historical figure to be Stalin (34 percent), then Putin (32 percent), and only then the poet Alexander Pushkin, Tsar Peter the Great, and Marshal Kutuzov, who defeated Napoleon. The polls also indicate that there is a large number of young people who think it necessary to restore memorial signs and monuments of Stalin on Russian city streets (and it does not matter whether they had family members who had suffered under Stalin). The 80th anniversary of the start of the Great Terror, which resulted in millions of victims in the USSR, was not declared a day of Russian mourning and repentance in late July 2017, and the leaders of the country did not deign to mark it. For young people born after 1991, the events then are just as distant as World War II or the revolution of 1917.

Does this mean that the putschists and Stalinists, albeit virtual ones, have taken the upper hand in Russia? That the surge toward the ages-old dream of the intelligentsia and the workers, men and women, for justice and respect for human dignity and rights had been in vain?

Of course not. The people who vote for re-Stalinization do not remember or know the reality of the Great Terror. As the philosopher Lev Gudkov, director of the Levada Center, said, they vote for the idea of strong power and state greatness, but they are unwilling to apply that idea to their personal practice. Their Stalin is a virtual figure, a simulacrum, and not a bloody tyrant. The authorities, using Stalin as an archetypical propaganda sign to strengthen their own image, have no interest at all in positioning themselves as followers of total cruelty. On the contrary, some analysts believe that the authorities are prepared to underline their difference from the practice of mass terror. This however does not keep them from intimidating opponents and using selective justice. And unquestionably, re-Stalinization is meeting resistance—there have been cases where independent media and civil society have stopped attempts to raise monuments to Stalin in the regions. The human-rights movement is alive, and the Last Address initiative, which places plaques commemorating the last places where victims of terror lived, continues throughout the country. Many young people participate in the expeditions organized by Memorial and in the work of the Gulag Museum to find mass graves and put names to victims; these young people are fearless. And the future is theirs.

But in order to bring the future closer, many unsolved problems must be settled and the arguments that were not ended in 1991 must be resolved. Most importantly, Russian citizens must be involved in the work of determining the meanings and forms of the future, as they had done in the perestroika years, which some are trying to erase from the public memory. This must not be allowed.

The peak—and at the same time, the end—of perestroika came in 1991. It awakened unprecedented civil activity in Soviet people, in all classes and strata. The “living circle” around the White House consisted of students and workers, peasants and academicians, Muscovites and visitors, people who had come for this and those who happened to be in town. Never in my life had I seen so many beautiful faces at one time as on those three memorable August days—their decision made them beautiful. They felt they were part of history, not cogs and not statistics, but people whose choice had to be considered. That experience has not been erased. It may be the main result. But not the only one. The people who went out into the streets were prepared—they had read the texts made available in Ogonyok, Moscow News, and Literaturnaya Gazeta and other literary journals, they had read and discussed Nikolai Bukharin’s last letter and the stories by Varlam Shalamov on the camps in Kolyma, Solzhenitsyn, the poems by imprisoned poets from the KGB “Keep Forever” seal, the research by Arkady Vaksberg and Yuri Shchekochikhin on the shooting of the striking workers in Novocherkassk, the massacre in Katyn, the deported ethnic groups, and corruption and the mafia in the USSR. They read the historians Stephen Cohen and Robert Conquest, the émigré writers Joseph Brodsky and Andrei Sinyavsky…

These people wanted to know the truth, they wrote to magazines recounting the fate of their relatives, they did not want it to ever be repeated. They wanted to live in a country where a person’s rights are more important than the interests of the regime, where the law was the same for everyone, in a country that was open to the world. They believed that perestroika would make it happen. That the Cold War and hatred would be replaced by a rejection of the arms war and with cooperation. Many Western contemporaries believed that, as well. Francis Fukuyama called the end of the Cold War the end of history, reflecting the mood and expectation of many on both sides of the Atlantic. We talked about that with Catharine Theimer-Nepomnyashchy and Jamey Gambrell on the barricades in August 1991.

Major events occurred between 1898 and 1991: for the first time independent candidates were elected to the parliament, including Sakharov, who had been returned from exile. The parliament voted for the repeal of Article 6 of the Constitution on the leading role of the Communist Party in the country. The Berlin Wall fell, symbolically indicating the start of a new world politics. A short time later, the law establishing freedom of the press was passed, opening the way for independent journalism.

But the law on glasnost—that is, on transparency and the authorities’ true responsibility—was not passed. Neither was judicial reform. Despite the opening of archives and thousands of publications on the crimes of the regime against the people, despite the calls for repentance for those crimes, there was no repentance. Nor was the Communist Party put on trial. And there was no political evaluation of many tragic events of the past. De-Stalinization petered out. And the young democracy did not create solid mechanisms to protect itself in the 1990s. Not in politics, economics, or the press. We understood only many years later that freedom and democracy were not a gift from heaven but hard and often unpleasant daily work. We also learned that the retreat from democratic ideals and the situation that is worrying us now are primarily the result of our own fecklessness. No one can fix it but we ourselves. It’s not very pleasant to admit that. Just as it is not very pleasant for some perhaps to understand that, along with great exploits in our recent history, there were also horrible villainous deeds. But it must be understood and accepted in order to go forward. The foundation for a rule of law was laid in 1991, and we must build on that, build democracy and the self-organization of society. It is not true that there are no possibilities for it. They are simply not used adequately. There were many fewer in 1991. But the people on the streets on August 19 were not afraid.

Three days in August remain in history as a heroic and inspired experience of civic awakening, the unexpected and joyous understanding that everyone’s personal choice has meaning and the future of the country depends on that choice.

That brief moment, that bright flash, left an unfading imprint on the development of events. It is a reminder that the development of history is not totally subject to schemes and constructs, even ones that seem so stable, like the Soviet structure, or the neoliberal, or the concept of Russia’s unique path, or even the end of history. History continues, and that is the most important thing.