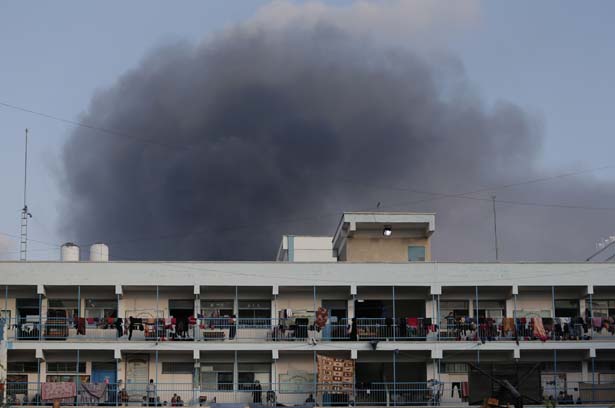 Smoke from the explosion of an Israeli strike rises over a UN school at Jebaliya refugee camp. (AP Photo/Lefteris Pitarakis)

Jabaliya, Gaza—The bombardment of Gaza is almost always worse at night. The missiles and shells rain down in greater number after dark. The sky is lit up by flares that illuminate the onslaught. With hardly any electricity, the Strip is turned into a vast silhouette. There is little sleep.

At dawn on Wednesday, the Israeli military shelled a United Nations school in the Jabaliya refugee camp in northern Gaza. Up to twenty people were killed, including four children, and more than 100 wounded. The school was sheltering more than 3,300 displaced Palestinians, many of them women and children. They had gone there to seek refuge from the falling bombs.

“Children were killed as they slept next to their parents on the floor of a classroom in a UN designated shelter in Gaza,” said Pierre Krähenbühl, the Commissioner-General of UNRWA, the Palestinian refugee agency, in a statement. “Children killed in their sleep; this is an affront to all of us, a source of universal shame. Today the world stands disgraced.”

With Gaza’s borders closed and 44 percent of the Strip declared a military buffer zone, the UN-run schools were seen by many displaced Palestinians as one of the only sanctuaries from Israel’s continued assault. They were wrong. The Jabaliya school is at least the sixth UN shelter to be struck since the conflict began.

On July 24, a UN school in Beit Hanoun was shelled, killing sixteen people, many of them women and children, and wounding over 200. UNRWA staff have also come under attack while driving UN-marked vehicles and in their homes. At least seven UNRWA local staff members have been killed since the conflict began.

More than 240,000 Gazans are living in UN shelters and another 200,000 may be taking shelter with host families, according to the United Nations. That means nearly a quarter of Gaza’s population has been displaced.

Like all UN schools, the Jabaliya Girls Elementary is incredibly overcrowded. Families live crammed together, more than seventy people to a classroom. They hang their clothes in the windows. There is little food and water to go around. At night the women and children are inside, the men on mattresses and blankets in the open courtyard.

It was still dark when the school was hit. According to multiple eyewitnesses at least three shells struck at around 4:30 am.

“I was running and stumbling over corpses,” says Nasser Khafaja, a 49-year-old who evacuated his apartment in the Al-Nada towers in Beit Hanoun on July 10, two days after the war began. He is bleeding from the chin, stomach and arm. “I was in the middle of death here. Now I have nowhere to go. I will be in the street.”

The roof and walls of one of the classrooms were severely damaged in the attack. A blood-stained blanket lies atop the rubble amid piles of clothes and upended furniture. The blackboard is still decorated with a drawing of a flower in faded chalk.

“I thought it was safe here,” says 25-year-old Ibrahim Haboub, who had been living at the school for over two weeks. He tried to help carry the wounded to the ambulances that eventually arrived. He says he saw a man with both his legs cut off lying in front of one of the classrooms and a woman a few yards away with her head smashed in. “If I knew this would happen, I would have stayed at home. I would prefer to die there.”

Many of the families at the school arrived from border areas in the north, heeding warnings by the Israeli military or after their houses were destroyed, leaving them homeless. Many arrived by donkey cart. Outside the school several donkeys lie dead in the street, chunks of flesh ripped out of them by shrapnel.

The United Nations said that the precise location of the school had been communicated to the Israeli military seventeen times. The Israeli army claimed militants had fired mortars from the vicinity of the school and troops shot back in response. UNRWA has found rockets at three of its schools in Gaza in the past three weeks, which it has condemned as a “flagrant violation of the neutrality of our premises.” Yet all three schools were empty and were not being used as shelters.

Eyewitnesses at the school in Jabaliya on Wednesday said they heard no firing in the area prior to the attack.

“Now I’m afraid of being in a UN school, they’re not safe,” says Aisha Abu Darabi, a mother of four from Beit Lahia. “Where do the Israelis want us to go?”

Since Israel’s war on Gaza began, nearly 1,400 Palestinians have been killed, the vast majority of the civilians, according to the United Nations, including over 240 children. More than 7,200 have been injured. The conflict is now entering its twenty-third day, longer than the 2008–09 Israeli assault.

And the violence is only escalating. Some of the heaviest assaults in the more than three week war have come in the last two days.

On Wednesday afternoon, the Israeli military bombed a crowded fruit and vegetable market east of Gaza City, killing at least twenty-four people and wounding over 200, according to Gaza’s Health Ministry, bringing the death toll for the day to nearly 130. The airstrike came during a four hour humanitarian ceasefire from 3 pm to 7 pm that Israel had announced earlier in the day, though Hamas had rejected the truce.

Local television broadcast horrific footage of the aftermath, with people lying dead or dying in the street. Palestinian photojournalist Rami Rayan was among the killed. He was shown lying motionless on his back, wearing a press vest and helmet.

Meanwhile, the army said three Israeli soldiers were killed when a booby-trap bomb exploded in the southern Gaza Strip bringing the death toll on the Israeli side to fifty-six soldiers and three civilians.

A day earlier, Israel killed more than 150 Palestinians and bombed several mosques, factories, homes and Gaza’s only power plant. A column of thick black smoke billowed up from the fuel depot that was hit, blackening the sky. Officials said it would a year before the plant could be repaired. Gaza City now receives about two hours of electricity a day, while areas further south have no supply at all. The lack of power is exacerbating already severe water and sewage problems.

Prices of basic goods are going up and people often buy things on credit. Telephone lines and the cellular network are often disrupted, particularly in the south. There are long lines outside bakeries with people desperate for bread. Residents walk for blocks with empty bottles and plastic jugs to find water.

The humanitarian crisis is growing and the bombardment is not stopping. There is no respite.